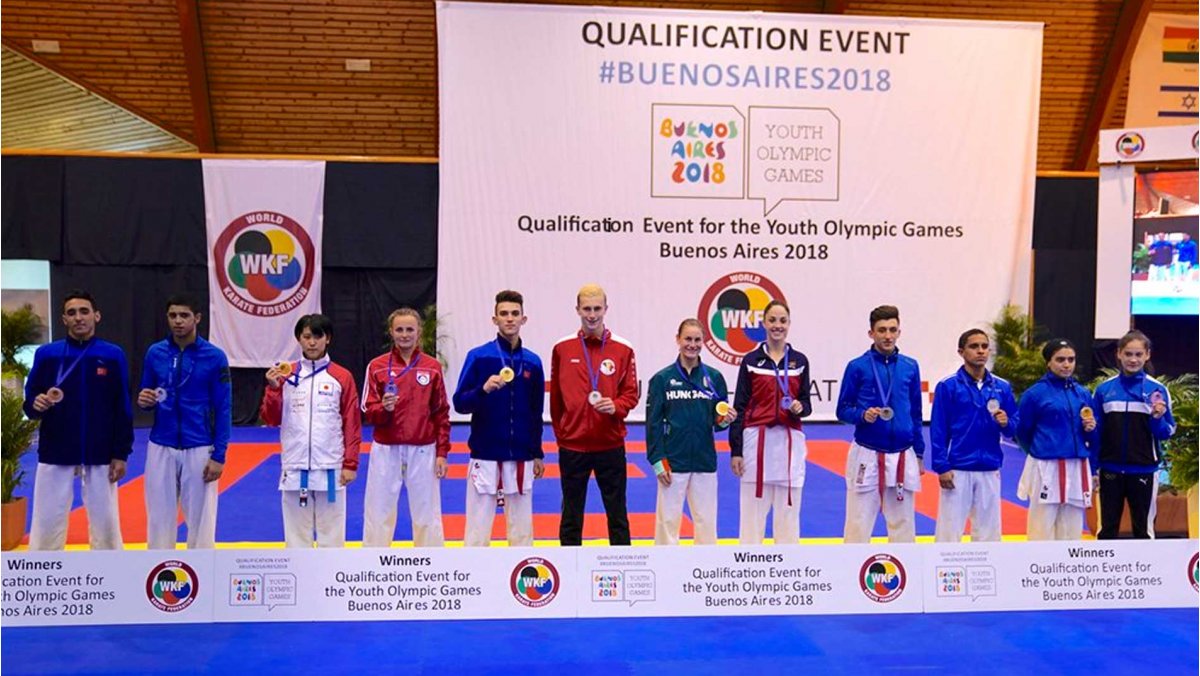 Promising karatekas won the right to participate in Buenos Aires 2018 as Karate’s first Youth Olympic qualification tournament concluded this weekend in Umag (Croatia). No less than 24 ries have qualified athletes to take part in Karate’s debut at the 2018 Youth Olympic Games thus showcasing the universality of the sport.

Promising karatekas won the right to participate in Buenos Aires 2018 as Karate’s first Youth Olympic qualification tournament concluded today in Umag (Croatia). No less than 24 ries have qualified athletes to take part in Karate’s debut at the 2018 Youth Olympic Games thus showcasing the universality of the sport.

SIX OUT SIX FOR JAPAN

Japan Karate achieved the remarkable accomplishment of qualifying six athletes out of possible six for the Youth Olympic Games. After the three places taken by Japanese karatekas by standing, and Keisei Sakiyama and Kotaro Nakamura’s success in the first day of competition, Sakura Sawashima completed the outstanding demonstration by Japanese karatekas with her victory in the semi-final of Female Kumite +59kg.

The young Japanese karateka even won the qualification in impressive fashion; the top favourite in the category stopped the clock ahead of time to win the bout against Adriana Gil of Spain by 8-0.

The importance of the historic moment weighed on the young athletes today; three of the key bouts finished with a tie and had to be resolved by ‘Hantei’ or decision. Iran got their second Olympic qualification with Alireza Farajikoihikheli’s victory in Male Kumite -61kg. The Iranian karateka defeated Olhas Kulazhan of Kazakhstan in the semi-final by ‘Hantei’ after the bout finished 0-0. 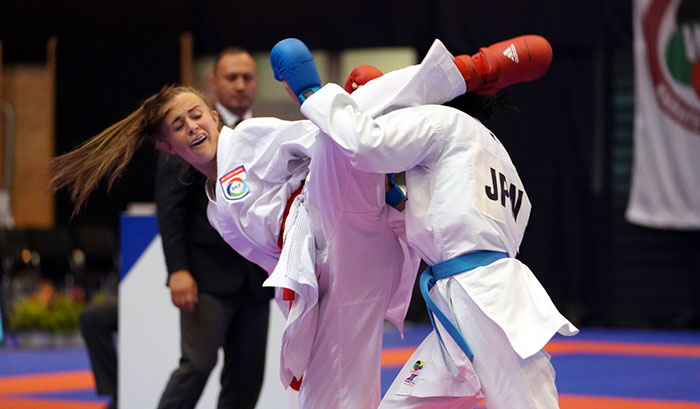 The winners of the two semi-finals in Female Kumite -59kg were also decided by ‘Hantei’ or decision. The bout between Ivana Perovic of Serbia and Fatma Naz Yenen of Turkey ended scoreless, and the judges decided to proclaim the Serbian karateka as the winner. Zsofia Baranyi of Hungary also won the bout and the Youth Olympic qualification by ‘Hantei’ after being ed as the winner by the judges over Camila Lopez of Peru (0-0).

After losing the semi-final match in the first day, thus barely getting at the doorsteps of the Olympic qualification, Fatemeh Khonakdartarsi of Iran made her dreams come true when she managed to achieve her goal in the second day. The Iranian karateka defeated Jill Augel Germany (2-1) in the semi-final of Female Kumite -53kg and continued the successful day for the Iranian delegation.

The impressive performance by Iranian karatekas was completed with Navid Mohammad’s victory in Male Kumite +68kg. The Iranian representative defeated Brandon Edward Carr of Great Britain 6-3 and got the fourth and final Olympic ticket for the Western Asian ry. 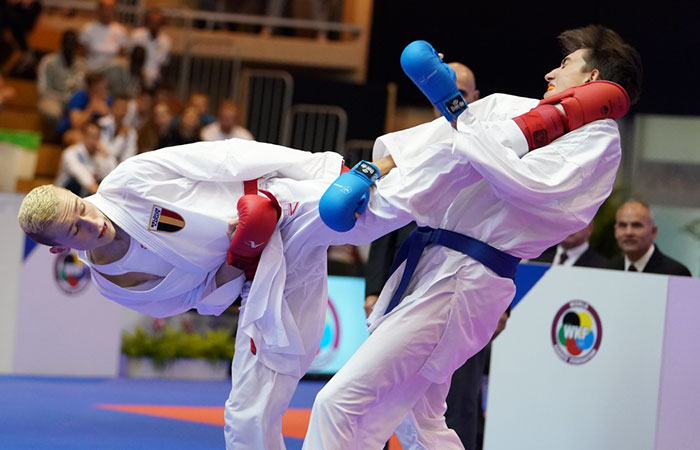 UNIVERSALITY OF KARATE SHOWCASED IN UMAG

The list of new ries getting Youth Olympic representation increased today with Morocco’s Yassine Sekouri’s victory in Male Kumite -68kg. The athlete from the African ry beat Bojan Boskovic of Montenegro by 3-0 after scoring three ‘Yukos’.

The second Olympic spot for Morocco today came in Male Kumite +68kg. Nabil Ech-Chaabi defeated Raybak Abdesselem of France in semi-finals by 2-0 and confirmed the progression of the African ry in the international scene.

Belgium also qualified one athlete to Buenos Aires 2018. In a tight semi-final bout, Quentin Mahaudden won the match and the Olympic ticket by ‘Senshu’ or first unopposed point in his clash against Joan Just of Spain (3-3).

Meanwhile, in Male Kumite -61kg, Pedro Pablo de la Roca of Guatemala defeated Alberto Moreno of Spain by 2-0 and will also be in the Youth Olympic Games. The young Guatemalan athlete scored two ‘Yukos’ to add his ry to the list of nations with qualified athletes for Buenos Aires 2018. 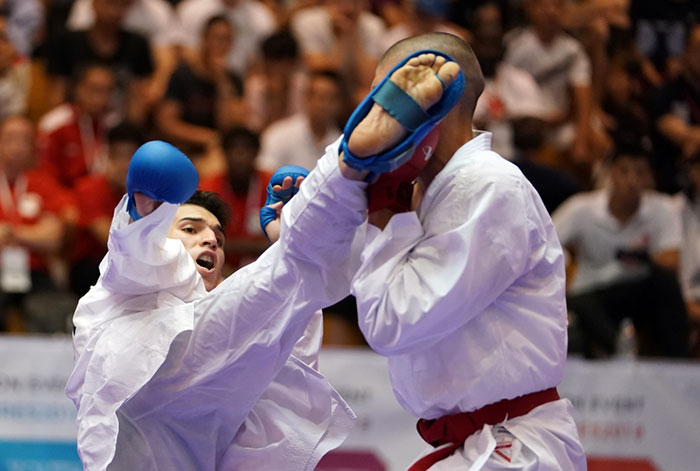 In a riveting second semi-final of Female Kumite -53kg, Dildora Alikulova of Uzbekistan produced one of the most impressive performances today to win the Olympic qualification. Alikulova defeated Aimee Rebecca Pollard of Great Britain in a thrilling semi-final. The British representative took the lead after claiming a ‘Yuko’ and a ‘Wazari’. However, the young karateka from Uzbekistan bounced back and added an outstanding ‘Ippon’ by ‘Ura-mawashi geri’ kick to her early ‘Yuko’ so to finish the bout 4-3. 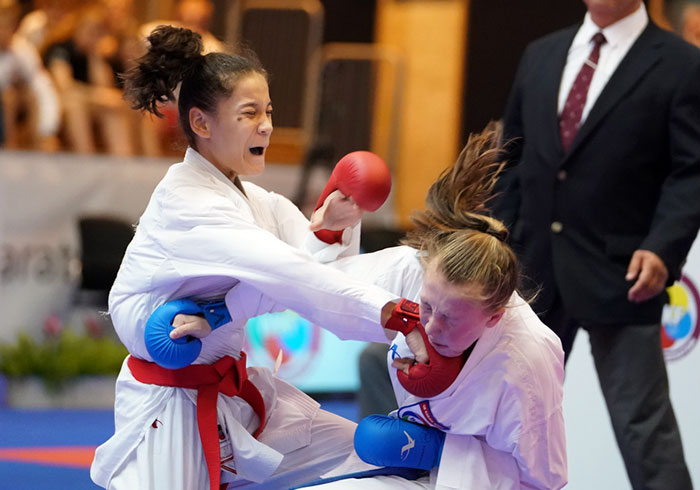 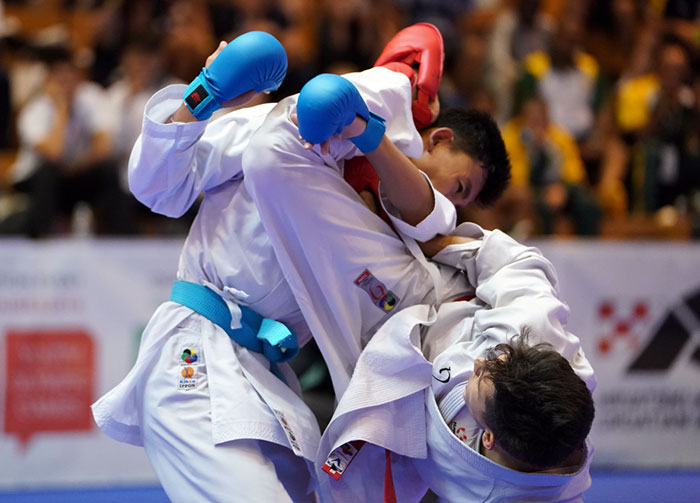