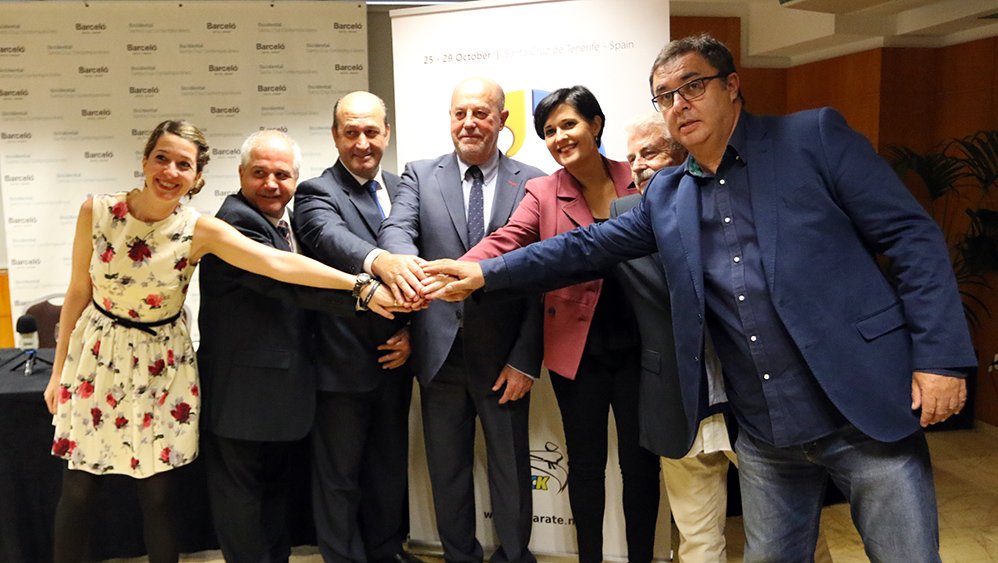 Representatives of the regional and national authorities and members the Karate family gathered at a press conference in Tenerife before the 2017 World Cadet, Junior & U21 Championships. The press conference launched the tournament that is set to break all records in the sport.

Representatives of the regional and national authorities and members the Karate family gathered at a press conference in Tenerife before the 2017 World Cadet, Junior & U21 Championships. The press conference launched the tournament that is set to break all participation records in the sport. Over 1700 competitors from 109 countries will meet in Tenerife for the historic tenth edition of the tournament.

WKF President Antonio Espinós thanked local and regional authorities for their support and pointed out the record-breaking attendance of the event. “We are pleased that the over 5000 people will be coming to Tenerife this week to enjoy the city and the Canary Islands. I hope that everyone going to the sports hall this week will appraise the many values of our sport”.

The head of Karate’s international governing body also praised the sport's top responsible in the region Jose Francisco Perez, who is also a renowned karateka.

“Someone who is a karateka will always be a karateka. The fact that Jose Francisco Perez holds this important position highlights the impressive social implementation of Karate. Karate is a sport that is present in all stages of society and that is why it has reached such high levels of relevance,” added Mr. Espinós.

The Tenerife region sports counsellor Cristo Perez said: “It is thrilling to know that this tournament to be held in Tenerife is presenting a record-breaking attendance. None of us could imagine that athletes from countries that are so distant from the Canary Islands would compete here. The name of Tenerife will be heard in nearly 200 countries and that is very important for a touristic region such as the Canary Islands”.

The Spanish Karate Federation president Antonio Moreno said: “This is the biggest event in the history of international Karate in terms of participation. I would like to remind everyone that we are an Olympic sport now, and I am sure that we will continue being so. This is also what makes this event so important. Maybe some of the competitors here will be representing their countries in Tokyo 2020”.

The Canary Island Karate federation president Jose Perez said: “I am very thankful that our island will be full of Karate people this week. For us, it is very important to have so many karate people here, at our home, and I just can say, enjoy it and make the most of it”.

The Santa Cruz de Tenerife city sports counsellour Veronica Meseguer said: “We are making a huge effort to have top sports events here. Who knows, maybe some of the athletes here will participate in the next Olympic Games. I would like to welcome everyone to this city. This capital offers many opportunities and I hope that everyone enjoys our city and that everyone makes the most of this event”.

The La Laguna city sports counsellour Agustin Hernandez said: “We are very pleased to host this tournament and we will show our best side in order that all the participants will feel at home here".

The director of sports of Canary Islands Jose Francisco Perez said: “It is a great honour to host ths record-breaking event here in Tenerife. I would like to thank all those who made this event happen. And many thanks to WKF President for your words; I will keep them very close to my heart”.

The 2017 World Cadet, Junior & U21 Championships feature new talent seeking to become the new rising stars of the sport. The event will also put young karatekas in the quest to qualify for the Youth Olympic Games Buenos Aires 2018. 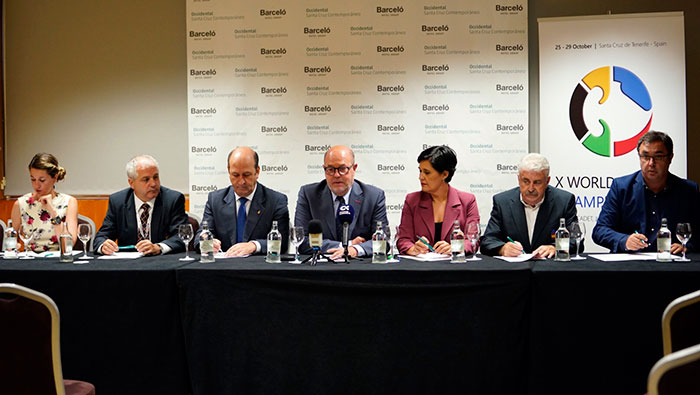