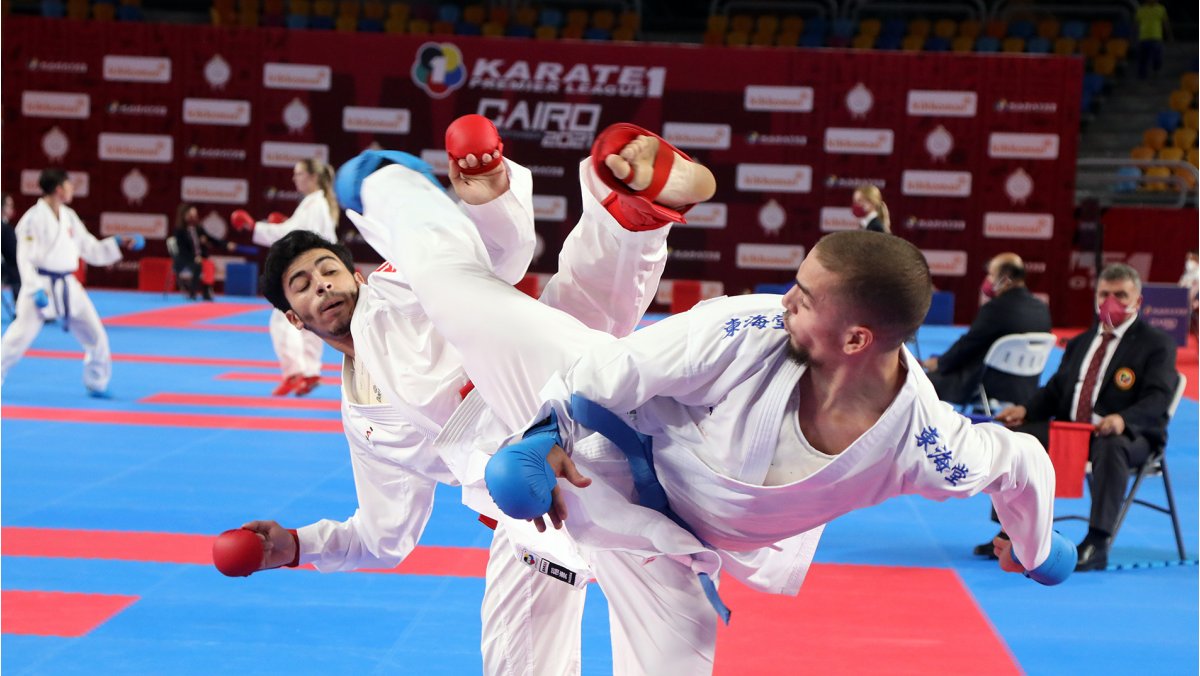 The Karate 1-Premier League Cairo started today with new names of the sport taking the spotlight of the competition. Yves Martial Tadissi of Hungary, Vinicius Figueira of Brazil, Junna Tsukii of the Philippines, and Egyptian karatekas were among the stars of the opening day of #Karate1Cairo.

After the outstanding success of Karate’s Olympic debut, the sport went back to action with a thrilling event in Cairo. The absence of some of the ranking leaders put the attention on upcoming athletes who dazzled on day 1.

REVENGE OF THE OLYMPICS IN MALE KUMITE -67KG

The final of Male Kumite -67kg will see two karatekas who nearly qualified for the Olympic Games fighting for the gold medal.

Yves Martial Tadissi of Hungary nearly made it to the historic Olympic Games as he finished in the last position of the Round Robin at the Olympic Qualification tournament in Paris. In Cairo, he proved to have recovered from his defeat at the event in Paris as he reached the final. The three-time European Championships bronze medallist beat Yevhenii Dyslovenko of Ukraine, Jesus Leonardo Rodriguez of Mexico and Ahmed Lotfy of Egypt to qualify for the finals. 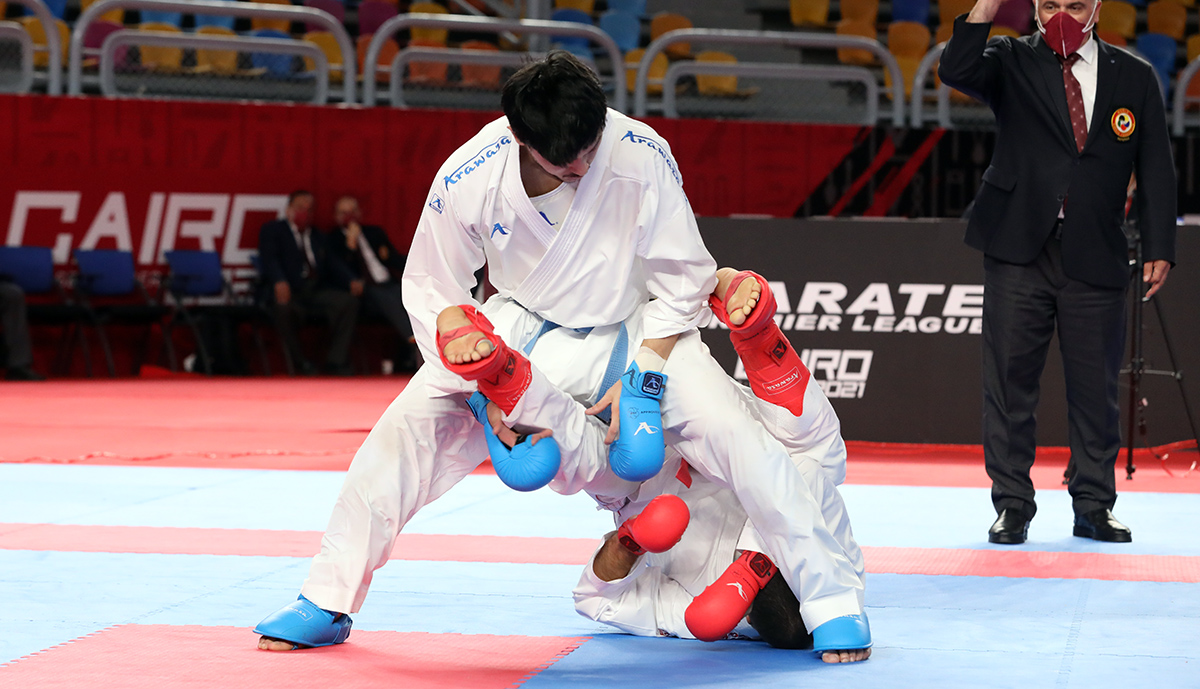 The blue belt at the final will be taken by Vinicius Figueira of Brazil. Ranked in the sixth position of the Olympic standings, Figueira was on the brink of reaching the Games by standings and then failed to qualify for the Round Robin stage at the Qualification tournament. However, the current continental championships bronze medallist showed top level in Cairo as he beat Gianluca de Vivo (ITA), Sultan Alzahrani (KSA) and Jess Rosiello (BEL) to make it to the final.

ITALY VS JAPAN IN FEMALE KATA

Kata powerhouse nations topped the competition in the Female Kata category as the gold medal bout will have Japan’s Maho Ono and Italy’s Terryana D’Onofrio clashing for the title.

The highest score of the day in Female Kata was claimed by Japan’s Maho Ono who dominated Pool 1 with 26.54 points. Ono has the silver medal at the 2019 Karate 1-Series A Montreal as her best result thus far.

Her rival in the final is Terryana D’Onofrio of Italy. The 2016 Grand Winner reached her first final since taking the title at the 2014 Karate 1 World Cup. The 24-year-old karateka topped Pool 2 with 25.62 points.

Fresh off her title at the 2021 Karate 1-Premier League Lisbon, Junna Tsukii of the Philippines showcased an outstanding level in Female Kumite -50kg. The 29-year-old karateka dominated her pool with victories over Yorgelis Salazar of Venezuela and Aleksandra Grujic of Austria. 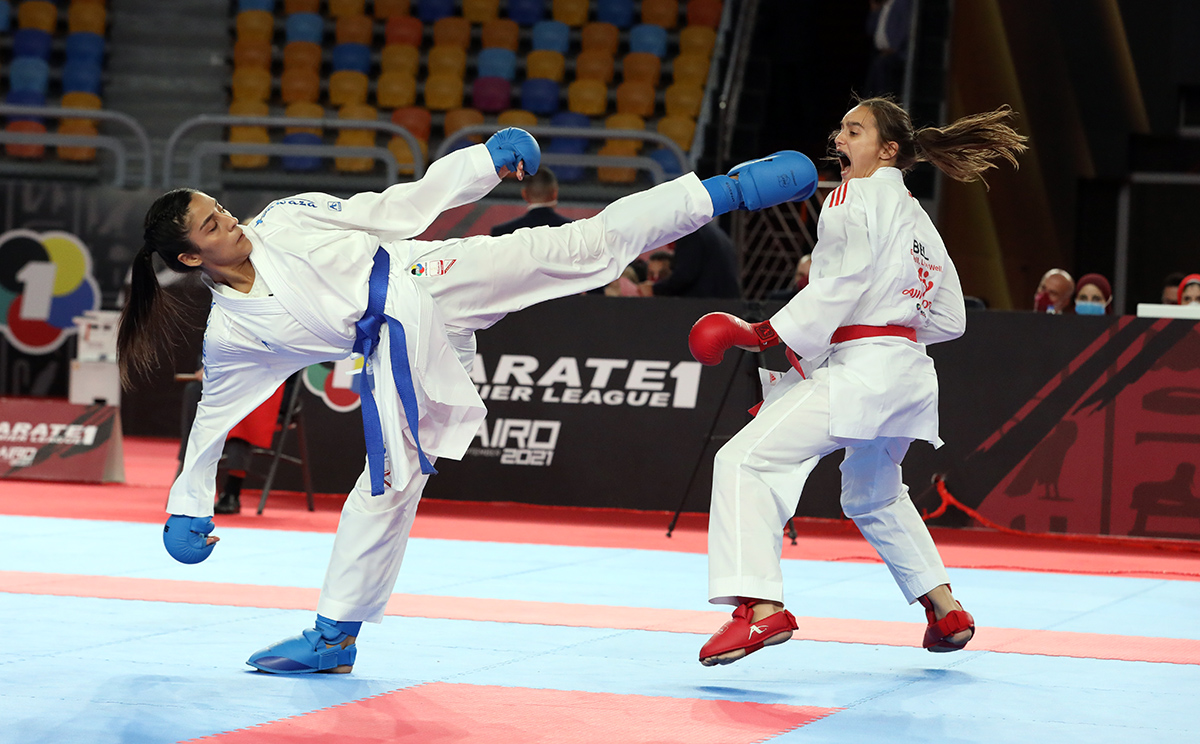 The other three spots in the semi-finals of the category to be contested on Sunday morning are claimed by three local representatives.

The trio of successful Egyptians is completed with Yasmin Nasr Elgewily. One of Egypt’s most promising competitors, the current Junior World champion of the category caused the big upset of the day in her first international senior appearance.

Ukrainian karatekas took the spotlight in Male Kumite -60kg as Nikita Filipov and Viktor Stefanyuk reached the final round. Filipov is a 19-year-old athlete who has the silver at the 2018 Karate 1-Youth League Caorle-Venice as the best result while Stefanyuk has never made it to the podium in her brief international appearances. 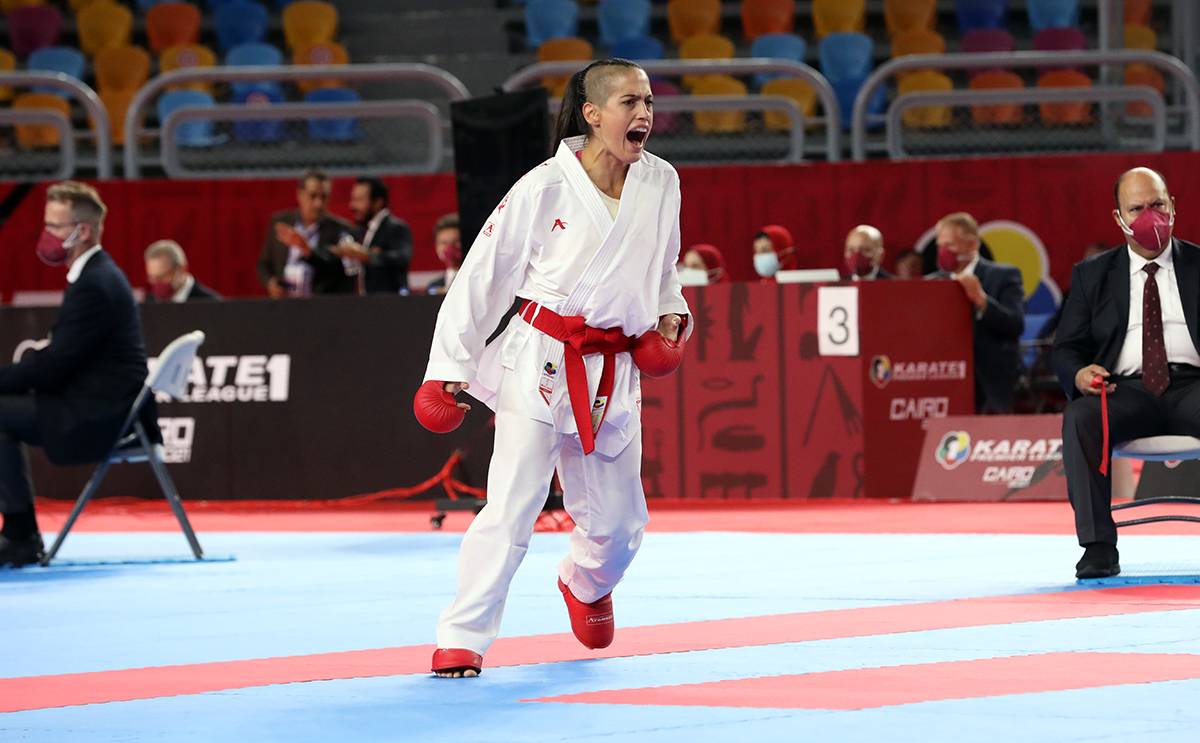 Following Vinicius Figueira’s successful performance in Male Kumite, the Brazilian karatekas dazzled in Female Kumite -55kg as Valeria Kumizaki and Carolaini Zefino Pereira were among the four athletes reaching the last phase of Round Robin of the category.

Promising Carolaini Zefino Pereira reached her first Karate 1-Premier League final round after topping the pool following a triumph over Reka Molnar (HUN) and a tie against Jennifer Warling (LUX). Her best result thus far is the gold medal at the 2018 Junior Continental Championships.

The final round of the category is completed with Hana Kuklova of Slovakia and Maya Schaerer of Switzerland. It is the first Karate 1 Premier League final round for Kuklova who prevailed in Pool 1 with victories over Mikaela Enriquez (ECU) and Hanne Michiels (BEL) and a defeat against Melinda Michel (SUI). Meanwhile, Schaerer beat Zuzana Schwartzova (SVK), and Oksana Bazeliuk (UKR) to top Pool 4. The 23-year-old karateka has the silver medal at the 2018 U21 European Championships as her best result.

The last category of the day was also successful for the delegation of the host country since Abdalla Abdelaziz qualified for the final of Male Kumite -75kg. The Egyptian karateka dominated Pool 1 and claimed victories over Jakub Stetina (SVK), Matias Rodriguez Fuentes (CHI), and Daniele de Vivo (ITA) to fight for his second medal this season (bronze at the Karate 1-Premier League Lisbon).

His rival in the final is Luca Rettenbacher of Austria who surprised the favourites and prevailed in Pool 2. The winner of the 2015 Karate 1-Premier League Salzburg qualified for his second final in six years after defeating Andrii Zaplitny (UKR), Panayiotis Loizides (CYP) and Andrea Ortenzi (ITA).

The list of finalists today is completed with the clash Egypt vs Spain in the final of Male Team Kata.

The rest of the categories will be wrapped up Saturday and the medal bouts are scheduled for Sunday.