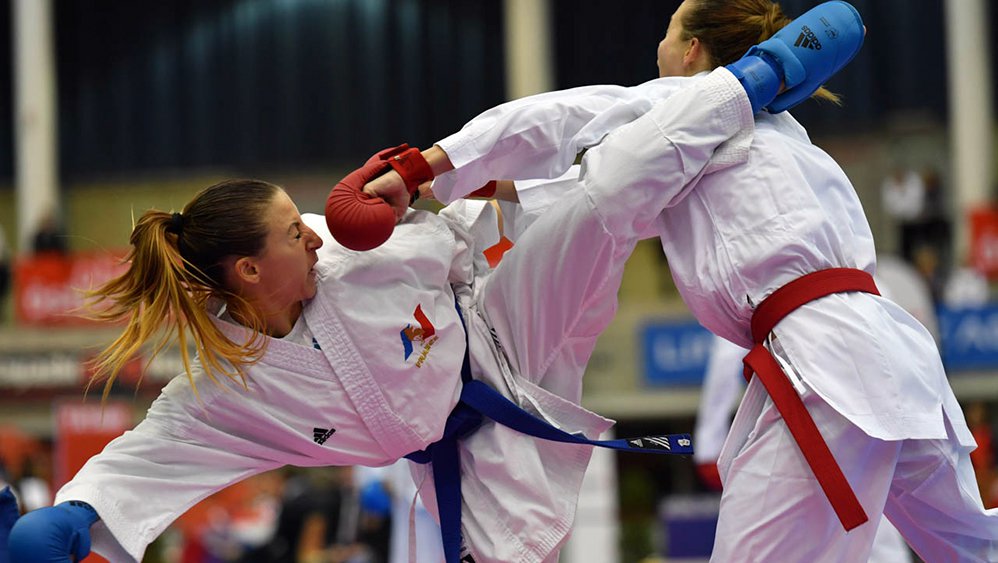 The second day of Karate World Championships will go down in history of the sport for the outstanding bout and the troubles that Karate Stars and top favourites found to make it to the finals. Suprising eliminations shocked most of the categories in contest in day 2 of the thrilling event.

The second day of Karate World Championships will go down in history of the sport for the outstanding bouts and the troubles that Karate Stars and top favourites found to make it to the finals. Suprising eliminations shocked most of the categories in action in day 2 of the thrilling event.

Alexandra Recchia of France was one of the big heroines of the day after a flourishing performance in Female Kumite -50kg category. The French star dominated in all her bouts of the day and defeated among others local hopeful Bettina Plank and Malaysia’s Shree Sharmini Segaran to earn the ticket to the final in spectacular fashion.

The category also represented the continuation to Japan’s successful performance in the first day of the tournament. Japanese young karateka Miho Miyahara surprised with her qualification to the final in her fourth major international event after her bronze in 2015 World Junior, Cadet and U21 Championships. Miyahara beat favourite Rawda Sayed of Egypt to make it to the title-deciding bout.

World and European champion Sara Cardin of Italy and World championships runner-up Syakilla Salni Jefry Krishnan of Malaysia failed to reach the decisive stages of the competition in a surprising outcome of the Female Kumite -55kg category. With the two top favourites out of the way, the path to glory was opened to young figures who dazzled in Linz.

Emilie Thouy of France confirmed her condition of main rising star of the sport after an effective and powerful performance in Linz. The 23-year old karateka defeated silver medallist Syakilla Salni Jefry Krishnan to repeat qualification to the final of a World Championships. Two years ago in Bremen the young French star was defeated by Sara Cardin and now in Linz the 2015 European champion will try to reach the top position of the podium.

Brazil’s Valeria Kumizaki became the other leading name of the day in women’s categories after earning her pass to the last bout of the tournament. The Brazilian karateka achieved her best result of her long career so to extend her tally of 15 medals in Karate 1-Premier League competitions.

Karate fans will have to follow closely one of the most exciting finals on Saturday, when two first-class karatekas will clash for gold. Egypt’s Giana Lofty confirmed her star status in her powerful rise to the final in Linz. The current World champion who has not lost a bout in over two years will try to increase her impressive tally of honours with her eight consecutive gold medal in major international tournament thus becoming one of Karate’s most decorated athletes in female competition.

“It is a honour to be one of the world champions competing in this tournament; it is a great feeling to be here among so many great athletes, so I hope I will do well (in the final). I hope I will win!,” said Giana Lotfy. 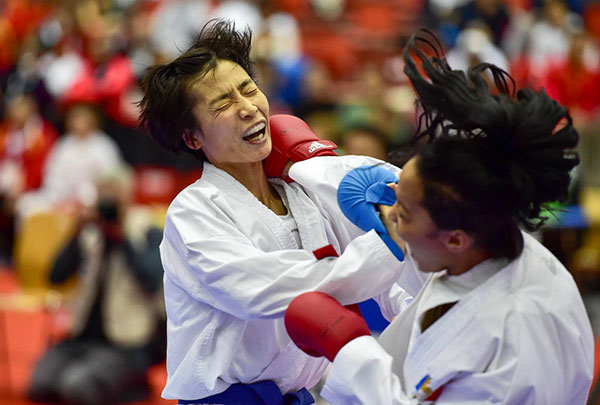 Front-runners reach final in Male Kata team
Facing impressive Lotfy is top Karateka Lucie Ignace of France. The athlete born in La Reunion presented an outstanding level throughout the competition and qualified for the final after upsetting China’s Xiaoyan Yin. The current European champion will try to recover the world crown which she earned on 2012 in an anticipated final bout for the domination of the category.

“I am very happy for reaching the final. My trajectory was difficult, but I have worked hard for this, so I am very satisfied to be in the final. My job is not done yet and I expect a good fight. We’ll see what happens,” stated Lucie Ignace.

In other of the big upsets of the day, world champion Douglas Brose of Brazil was stripped early of options to win his third gold medal in World championships after his shocking defeat in the pool round against France’s Sofiane Agoudjil.

The places to fight for gold went to Geoffrey Berens of The Netherlands and Amir Mehdizadeh of Iran. The Dutch karateka beat Firdovsi Farzaliyev of Azerbaijan in semi-finals and will try to reach the top of the podium after his silver medal two years ago in Bremen.

Iran upcoming karateka got the best result of his short career following a victorious perfomance in Linz. Mehdizadeh defeated France’s Sofiane Agoudjil in semi-finals, and extended Iran’s successful performance in the tournament.

Favourite and world ranking second placed Yves Martial Tadissi of Hungary made history for his country after qualifying for his first final in World Championships. The Karate 1-Premier League in Okinawa gold medallist defeated top karateka Burak Uygur of Turkey to earn the right to end the Hungarian drought of medals in the biggest Karate competition.

The opposite place in the tatami for the final also had a surprising contender since England’s Jordan Thomas won the ticket to the title-deciding bout following an impressive performance. In his first final in over two years, the European championships bronze medallist produced one big upset of the day after defeating top favourite and world ranking leader Vinicius Figueira of Brazil. 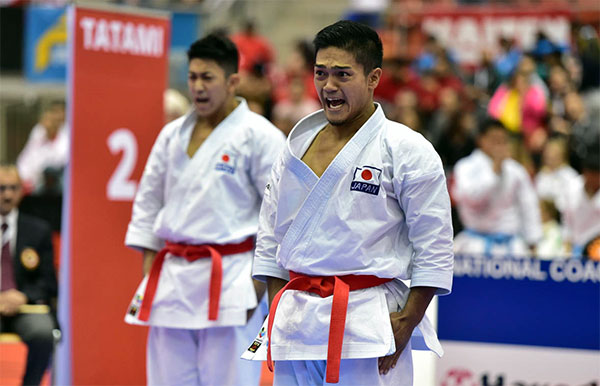 Japanese delegation reached their fifth out of six finals of the competition thus far after signing a convincing performance in Male Kata team. Led by world champion Ryo Kiyuna, the Japanese team formed by individual Male kata finalist Kiyuna, Arata Kinjo and Takuya Uemura rushed into the final stunning all the rivals on their way, including European champions Spain.

Overcoming the disappointment suffered at home ground in the European Championships in Montepellier, where they lost the final against Spain, the French team recovered to qualify for the golden match bout. The squad composed by Lucas Jeannot, Enzo Montarello and Ahmed Zemouri cruised to the last round defeating first-class kata teams like Germany, Italy and Egypt.

Two successful countries in Kata competitions in the last years, Japan and Spain are set to clash for gold in the final of the Female Kata Team competition. The Japanese side, in their sixth final of the championships, confirmed their favourite status with an impressive demonstration of coordination and control. The team formed by Miku Morioka, Hikaru Ono and Kyosuke Yamashita will try to avenge the defeat suffered two years ago against the German team in the final in Bremen.

Spain will try to take Germany’s side and repeat the history on Sunday following their positive performance in Linz. The karatekas Gema Morales, Margarita Morata and Paula Rodriguez achieved their best result as a team and eliminated top competitors France and Egypt, European championships bronze medallists Turkey and Pan American champions Brazil. 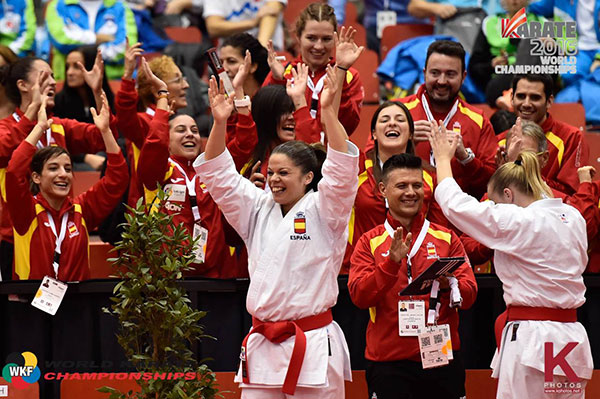