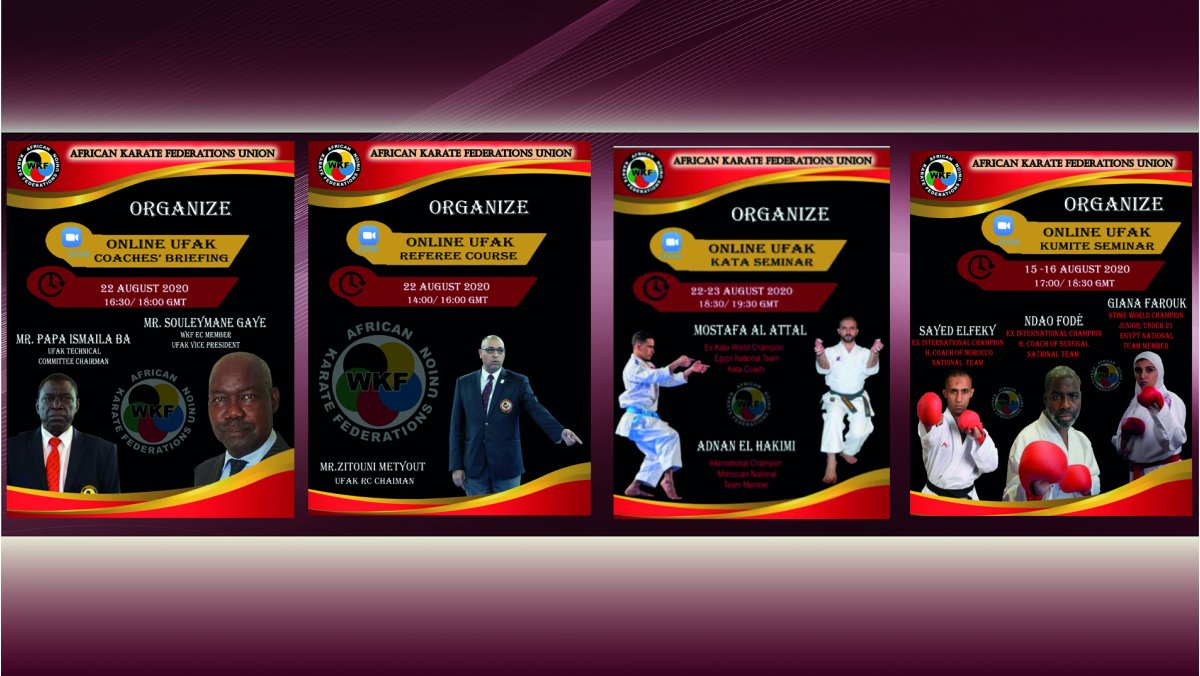 The Union of African Karate Federation (UFAK) has organised a series of top-level online seminars to further extend the progress of the sport in the continent amid the current coronavirus pandemic.

The Union of African Karate Federation (UFAK) has organised a series of top-level online seminars to further extend the progress of the sport in the continent amid the current coronavirus pandemic.

Available to karatekas around the continent via videoconference, the seminars were held from August 15 to 23 and were headed by Mohamed Tahar Mesbahi, UFAK President and WKF Vice President.

Nearly 2000 Karate representatives joined the seminars. The sessions started with the first part of the Kumite conferences which had coaches Sayed Elfeky of Morocco and Fode Ndao of Senegal leading the instructions.

On Sunday, two-time World champion and current number 2 in Karate’s Olympic standings in the category of Female Kumite -61kg, Giana Farouk of Egypt took the stage. The four-time continental champion conducted one of the most popular seminars thus showcasing the increasing popularity of the sport among women in Africa. Giana Farouk, who had claimed three medals including gold at the UFAK Championships this season before the cancellation of events due to the coronavirus, shared her experiences on dynamics, coordination and combat management.

Kata fans also had the opportunity to raise their level in the online seminar which was held on August 22 and 23. The sessions were conducted by Egyptian Kata team member Mostafa Al Attal, and Moroccan Kata team member Adnan El Hakimi.

On August 22, a referee course was organised in order to give prospective judges in the continent the tools to continue their progression as referees in WKF competitions. The seminar was imparted by UFAK Referee Commission chairman Zitouni Metyout.

One of the most important sections of the series of online seminars which were organised by UFAK was the one focused on WKF Safe Sport Policy. Different guidelines and recommendations to prevent all forms of harassment were discussed in the conference aiming to showcase WKF’s determined efforts to further spread the application of Safe Sport Policies in the sport. Over 30 countries took part in the WKF Safe Sport Policy activities.

The seminar was conducted by WKF Entourage Commission chairman Souleymane Gaye and it gave attendees information on how to prevent harassment and abuse cases, as well the framework within WKF Safe Sport Policy to act in the event of cases occurring. Following WKF’s interest to intensify Safe Sport practises, further editions of the seminar are set to be organised in the near future.