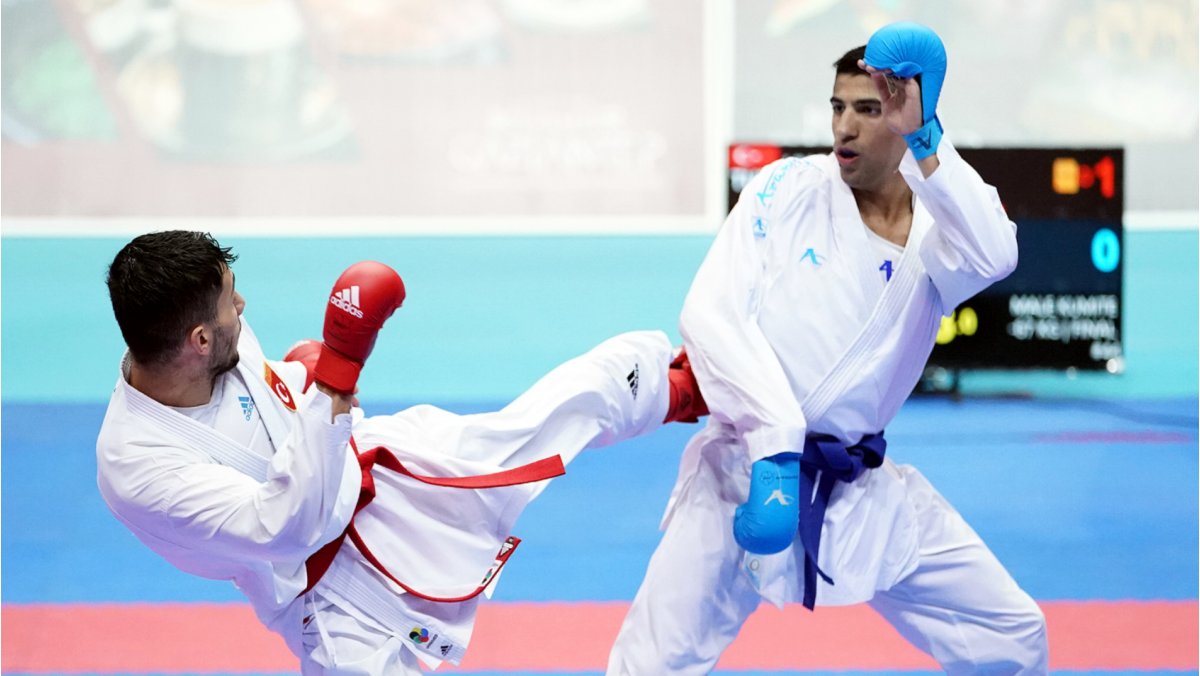 The first day of finals of the 2022 European Karate Championships concluded with a demonstration of the strength of Turkish karatekas. Serap Ozcelik Arapoglu - who led the host nation to an impressive gold medal count - Anzhelika Terliuga of Ukraine, and Sandra Sanchez of Spain were among the heroes of the day.

The final of Female Kumite -55kg was a repetition of the Olympic final in Tokyo and was as thrilling and as electric as the clash at Nippon Budokan. This time, Anzhelika Terliuga of Ukraine took the title thus avenging the defeat she suffered from Ivet Goranova of Bulgaria in Tokyo.

The current World ranking leader from Ukraine used two spectacular “Ippon” or three-point techniques to pave her way to the top of the podium. Despite Olympic champion Goranova’s attempts, Terliuga secured the title with a late “Wazari” or two-point technique 11-3. 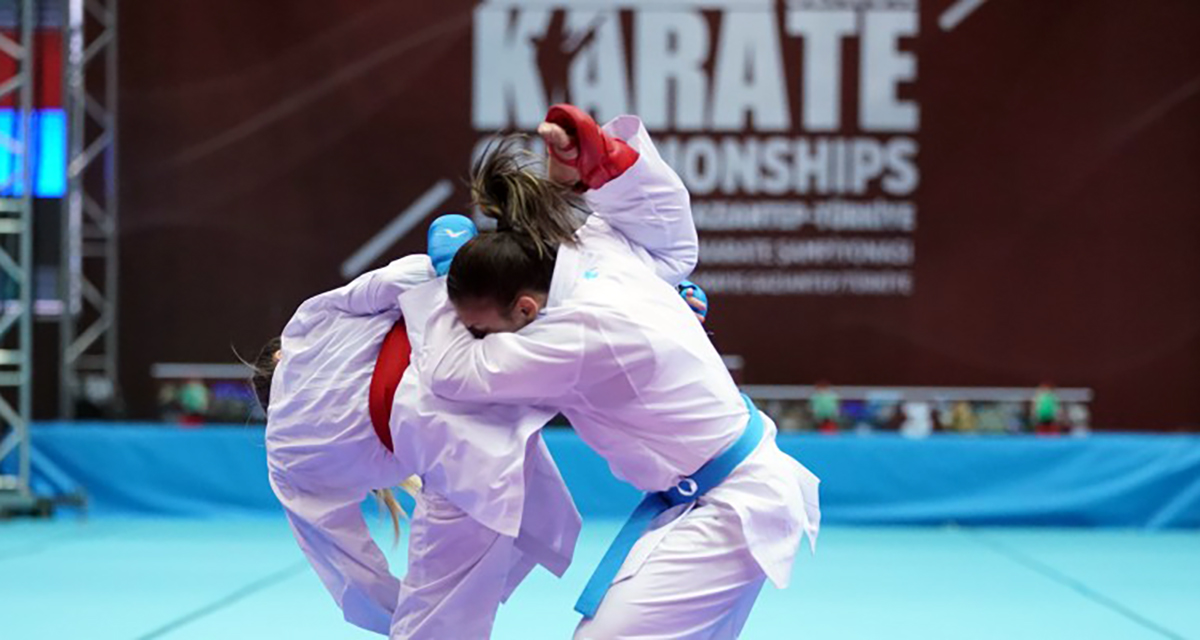 Turkish fans had plenty of reasons to celebrate since the delegation of the host country went home with six gold medals.

Eda Eltemur became European champion in Female Kumite -68kg as the 12-ranked karateka from Turkey defeated Miroslava Kopunova of Slovakia in the final 2-0.

The third title for hosts was claimed by Ali Sofuoglu in Male Kata. The Turkish Kata ace maintained the crown that he won last year after defeating Olympic silver medallist Damian Quintero of Spain. Sofuoglu used the home ground factor in his favour to win the final bout by 27.34 to 26.62. 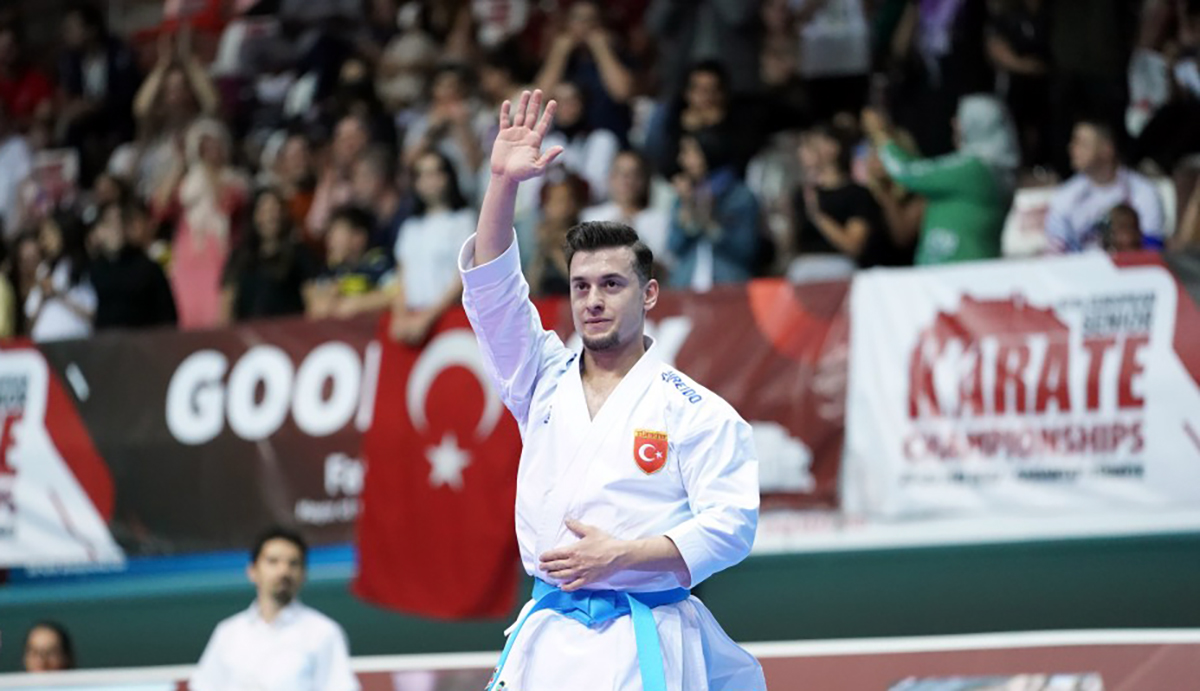 Eray Samdan increased the gold medal count for the organising country with his victory in Male Kumite -60kg. The defending champion was elevated by the support from the stands to defeat World Championships runner-up Angelo Crescenzo of Italy. Samdan connected a “Yuko” of one-point technique to win the match 1-0.

The final of Female Kumite -50kg between Serap Ozcelik Arapoglu of Turkey and Erminia Perfetto of Italy was a festival of offensive Karate, with both karatekas engaging in a constant exchange of actions.

After connecting three “Yuko” and one “Ippon”, Ozcelik Arapoglu countered the two “Wazari” and one “Yuko” by Perfetto with a final “Ippon” to win the bout 9-5. It is the sixth continental title for Ozcelik Arapoglu who continues to be Turkish Karate’s biggest star.

The last gold for Turkey came in the category of Male Kumite -67kg. In front of a boisterous local audience, Burak Uygur took the flag of the host country to the top of the podium following a dominating 4-0 victory over Dionysios Xenos of Greece. With this triumph, Uygur wins his third European crown. 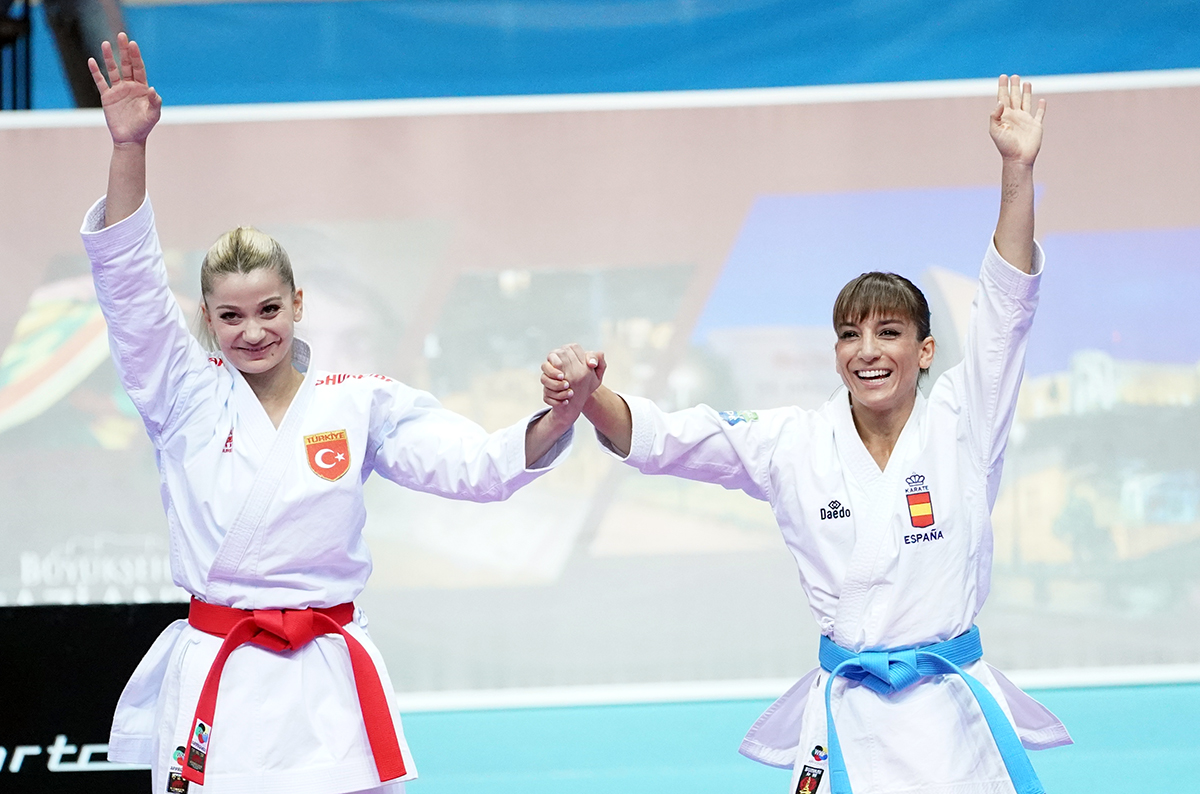 Defending Olympic, World, and continental champion Sandra Sanchez of Spain extended her domination of the category of Female Kata and added one more recognition to her impressive and record-breaking tally of awards. The Spanish Kata queen won her seventh European crown after defeating local star Dilara Bozan.

Sanchez excelled in her presentation of “Chatanyara Kushanku” kata and overpowered Bozan 27.2 to 25.7.

Youngsters took a stand today and put a new generation of karatekas on the frontline of the sport. Twenty-year-old Ivana Perovic of Serbia took the title in Female Kumite +68kg after edging Aicha Zakia Boussebaa of Hungary. A “Yuko” or one-point technique is all Perovic needed to win the bout 1-0 and the continental crown for the first time.

Daniel Gyorgy of Hungary claimed the gold medal in Male Kumite -84kg after a slim 3-2 victory over Enes Garibovic of Croatia. The bout went 2-2 to the last seconds of the clash but Gyorgy managed to connect a late “Yuko” or one-point technique to win the title. 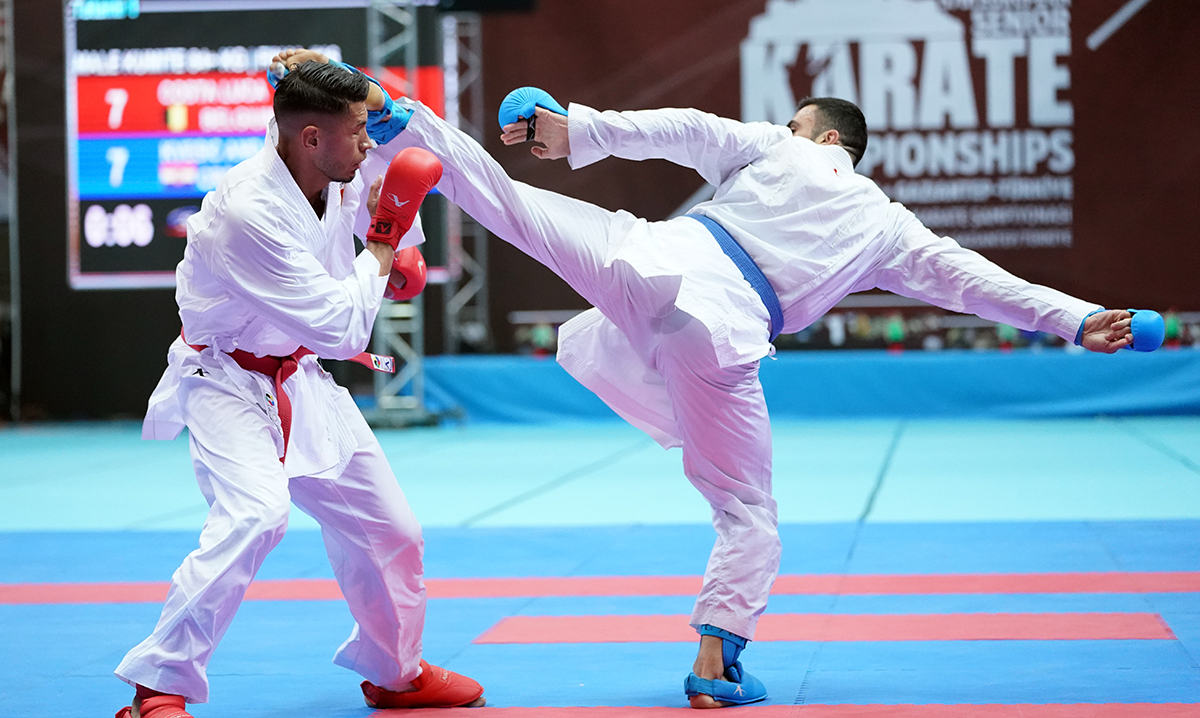 The final of Male Kumite +84kg was an absolute showdown of offensive Karate, with both finalists Luca Costa of Belgium and Andjelo Kvesic of Croatia giving a masterclass of “Ippon” or three-point techniques. The title went to Kvesic who signed off a final Ippon with 0.02 on the clock to win the bout 13-7.

Meanwhile, in Female Kumite -61kg, the title went to Ingrida Suchankova of Slovakia. The number 5 in the World ranking edged Anna Miggou of Germany by a tight margin 2-1 to claim her first continental title.

Hungary’s Olivia Kakosy won back-to-back World and continental titles as she added the European crown to the gold medal she took in the World Championships in Dubai. Kakosy defeated Lucia Sanchez of Spain in the final of Female Intellectually Impaired K21 with a score of 42.3 to 39.88.

The successful performance of Spain in Para-Karate started in Intellectually Impaired Male K21. Carlos Huertas defeated Albert Singer of Germany by 41.54 to 39.6 so to become World and continental titleholder.

Victor Manuel Prieto won the second title of the day in Para-Karate for Spaniards as the current number 5 in the WKF World ranking defeated Mattia Allesina of Italy in the final of Intellectually Impaired Male K22 39.16 to 38.96. 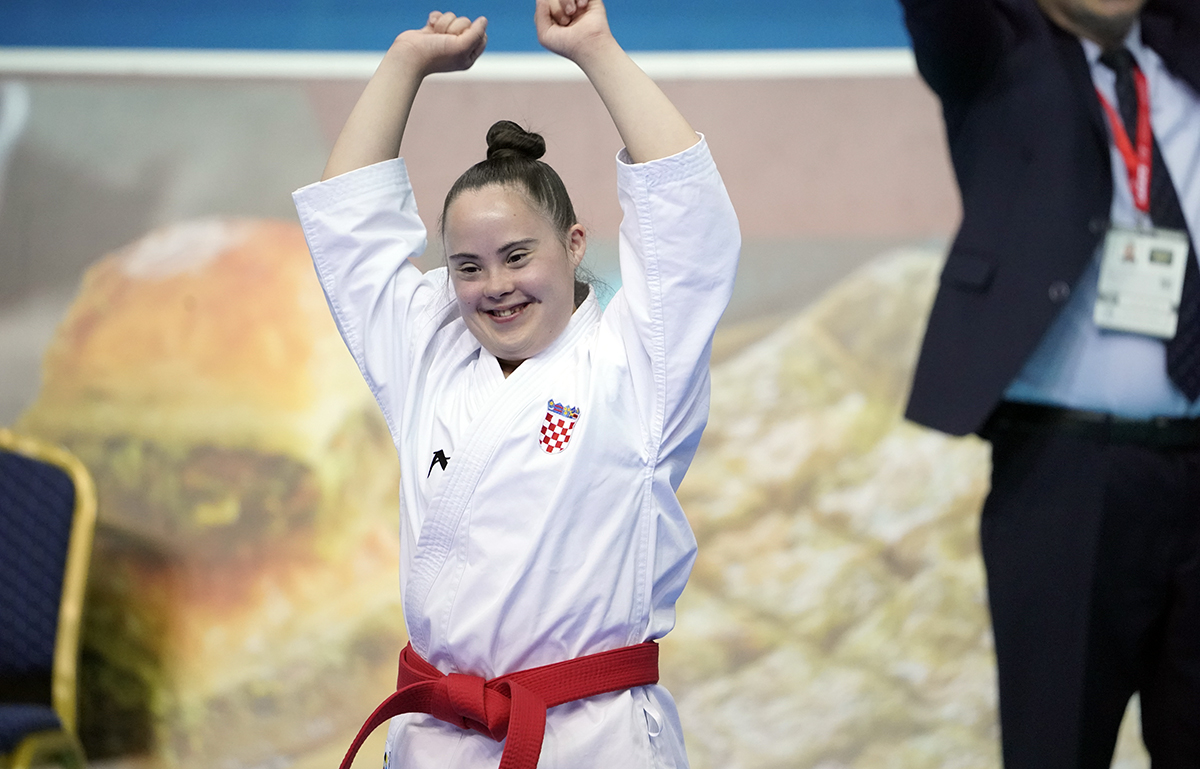 The title in Intellectually Impaired Female K22 went to Daniela Topic of Croatia who edged Alexandra Szabo of Hungary and Maria Ester De Leon of Spain, with scores of 37.1, 32.3, and 35.24 respectively.

In the category of Blind/Visually Impaired K10, Emiliya Mitlinova of Azerbaijan won the crown in the Female competition after beating Benedetta Belotti of Italy 39.68 to 38.74 while Alexe Dorin of Romania upset Nihat Mammadzada of Azerbaijan in Male category 40.68 to 38.86

The event concludes Sunday with the final day. All the bronze medal bouts and finals on Sunday will be available LIVE on the WKF YouTube channel.

CLICK HERE to go to the micro-site of the 2022 European Karate Championships.