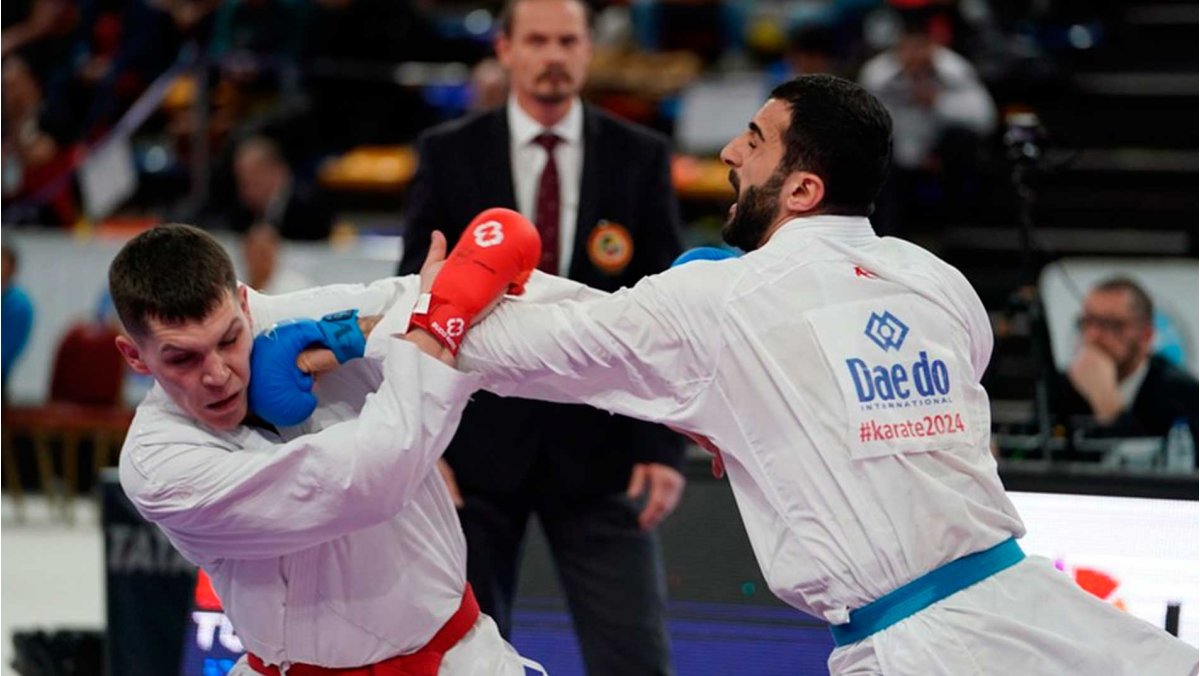 The second day of action at the 2019 EKF European Karate Championships finished with Turkey dominating the competition and hosts of Spain extending their excellent performances in Kata categories.

The second day of action at the 2019 EKF European Karate Championships finished with Turkey dominating the competition and hosts of Spain extending their excellent performances in Kata categories.

The European powerhouse nations demonstrated their prevalence in the Team Kata competition today at the event being held in Guadalajara (Spain). Just as it happened in the individual tournament, Spain, Turkey and Italy capitalised the final spots in the Team kata categories. Hosts of Spain had plenty of reasons to celebrate today since both the Male and Female teams qualified for the title-deciding bouts.

The Male Spanish side formed by Sergio Galan, Jose Manuel Carbonell and Francisco Jose Salazar – who has gathered a whopping 11 consecutive finals at the continental stage  - confirmed their favourite status by topping the pool with their performance of “Chatanyara Kushanku” kata (26.48 score). 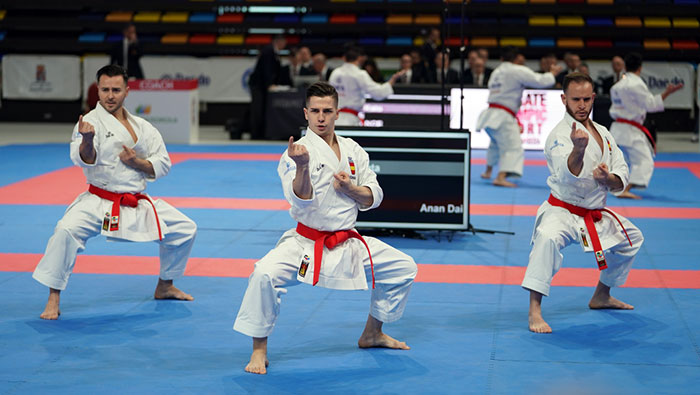 Turkey took the other final spot thus initiating up a dominating participation in the second day of the competition. The side formed by Kutluhan Duran, Emre Vefa Goktas and Ali Sofuoglu headed the pool with their rendition of “Kanku Sho” kata (26.34 score).

In Female Team Kata, Spain and Italy will fight for gold in the finals. The Spaniards, with the team formed by Lidia Rodriguez, Raquel Roy and Marta Vega prevailed in the pool excelling in their “Anan Dai” kata and taking a score of 24.62.

Confirming their favourite status, the current continental champions of Italy qualified for the final after topping the pool with a score of 24.48. The line-up composed by Carola Casale, Terryana D’Onofrio and Michela Pezzetti presented an impressive “Anan Dai” kata to fight for their third consecutive gold.

Extending the impressive performance that they registered on the first day of competition, Turkey continued showcasing an outstanding level in Guadalajara. In addition to earning the qualification to the final of Male Team Kata, the Turkish representatives also reached the title-deciding bout in Male Team Kumite. The team headed by Grand Winner Ugur Aktas defeated Ukraine 3-0 in semi-finals to defend the continental title which they won last year in Novi Sad. 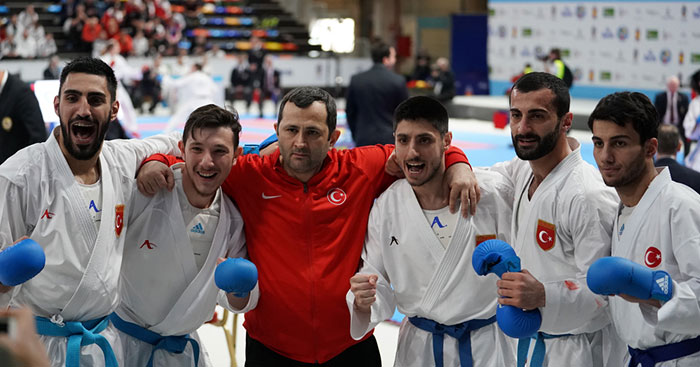 In the other side of the pool, Serbia upset host of Spain to reach their first-ever continental final. The Serbian side claimed a 3-0 victory over Spaniards and will fight to surprise the top favourite nation in the category.

The third qualification for the finals of the day for the Turkish delegation came in Female Team Kumite. The Turkish squad defeated hosts of Spain in semi-finals 2-0 and aims at recovering the title which they won for the last time in 2014.

Ukraine took the other final spot in Female Team Kumite. The Ukrainian side headed by Anzhelika Terliuga defeated Italy 15-8 in semi-finals. The Ukrainian side became European champion in 2017 so they hope to go back to the top of the podium in Guadalajara.

The second day of action in Guadalajara also represented the debut of the Para-Karate categories. The inspiring Para-karatekas produced moving performances on the tatamis of Pabellon Multiusos sports hall and demonstrated that no barrier is high enough when it comes to Karate. 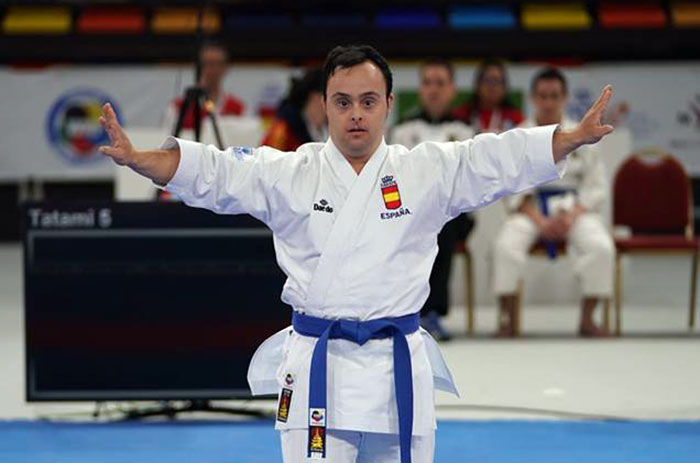 In Blind/Visually Impaired, Sahib Ahadov of Azerbaijan and Zviadi Vasadze of Georgia, and Monika Preem of Estonia and Cristy Shedimar Tojo of Spain will clash for the titles in male and female competition respectively.

The tickets to the finals in Intellectually Impaired went to Albert Singer of Germany and Antonio Gutierrez of Spain in Male competition, and to Charlene Odin of France and Nina Fell of Germany in the female category. Spain prevailed in Wheelchair User as Juan Antonio Sepulcre of Spain and Evgenii Korobeinikov of Russia will clash for gold in the male competition and Isabel Fernandez of Spain and Virginie Ballario of France will meet in the female final.

The 2019 EKF Karate Championships continues on Saturday. The medal bouts in the individual categories will take place on Saturday and all the action from Guadalajara will be streamed LIVE on karateworld.tv 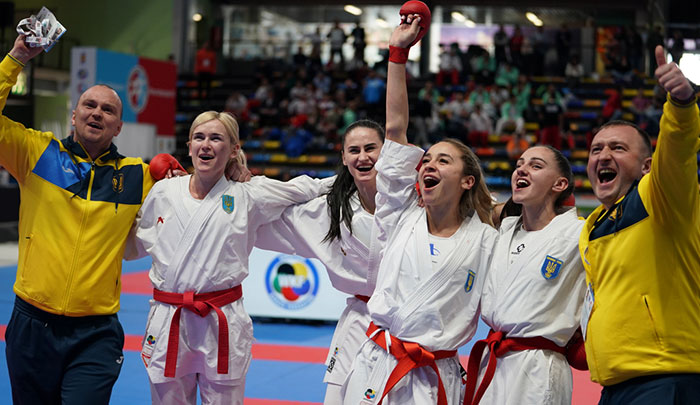