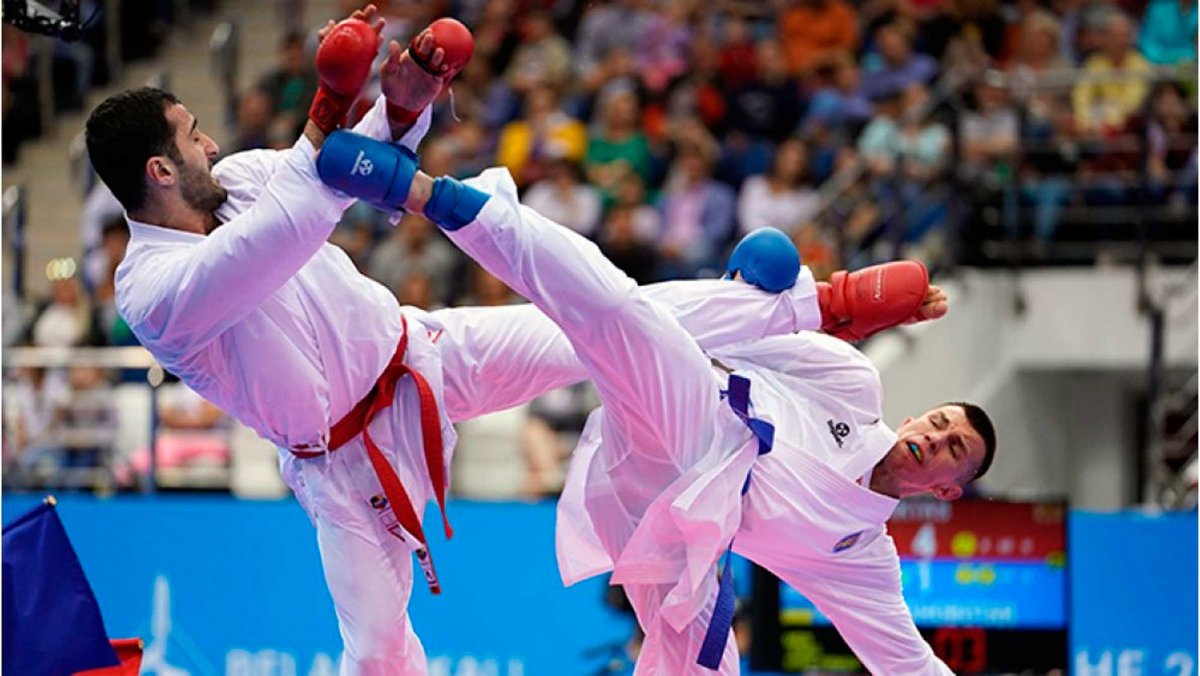 The Karate competition at the 2019 European Games was truly memorable and gave fans of the sport plenty of outstanding moments to remember. From Stanislav Horuna’s shocking victory to Spain’s domination in Kata, and from the revolution of new names to the tremendous impact of Karate in the multi-sport event, these are the top takeaways of the historic 2nd edition of the European Games in Minsk (Belarus)

The Karate competition at the 2019 European Games was truly memorable and gave fans of the sport plenty of outstanding moments to remember. From Stanislav Horuna’s shocking victory to Spain’s domination in Kata, and from the revolution of new names to the tremendous impact of Karate in the multi-sport event, these are the top takeaways of the historic 2nd edition of the European Games in Minsk (Belarus)

Past, present and future of Karate gathered in the unforgettable final of Male Kumite -75kg as Rafael Aghayev of Azerbaijan met Stanislav Horuna of Ukraine. It was one of the highlights of the tournament, a clash for the domination of the sport in one of the most disputed categories of the discipline.

Wearing “Aka”, Stanislav Horuna took the tatami as one of the most notable competitors of the sport, an athlete with 12 years of international career but who only had eight gold medals in Karate 1-Premier League events and the Grand Winner award last year as major recognition. 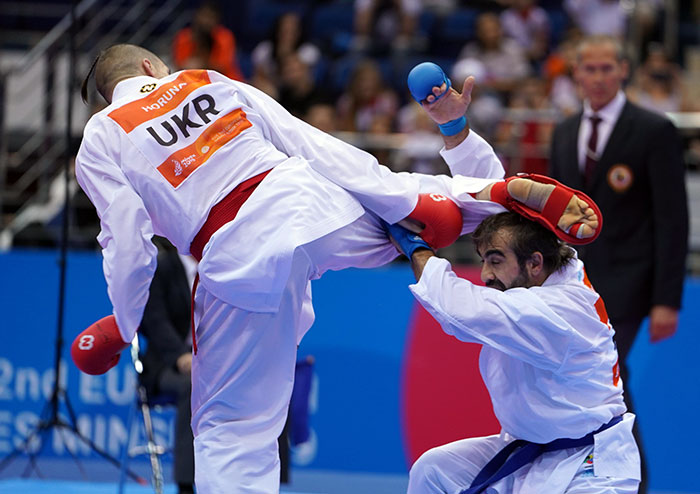 On the other side wearing “Ao”, Rafael Aghayev aimed at extending his legend. The five-time World champion, ten-time European title-holder and defending European Games winner reached the final of the event to continue writing the history of the sport.

In a thrilling final, Horuna dominated the bout and connected an early “Yuko” to take advantage of the ener. Aghayev tried to come back using his competitive trade-mark style but Horuna finished the match with an outstanding “Ippon” by “Uramawashi geri” kick.

The sense of end of an era overflowed Chizhovka Arena sports hall as Horuna seemed to apologise to his rival and long-time idol when he was declared the new European Games champion. Even at the podium, the fan favourite from Ukraine appeared confronted with the duality of his biggest title and the historic moment being experienced.

“I can’t describe what I am feeling right now. I have been waiting for this moment for so long, and once it happens, there are no words to define it. You need to experience this feeling,” said Stanislav Horuna. 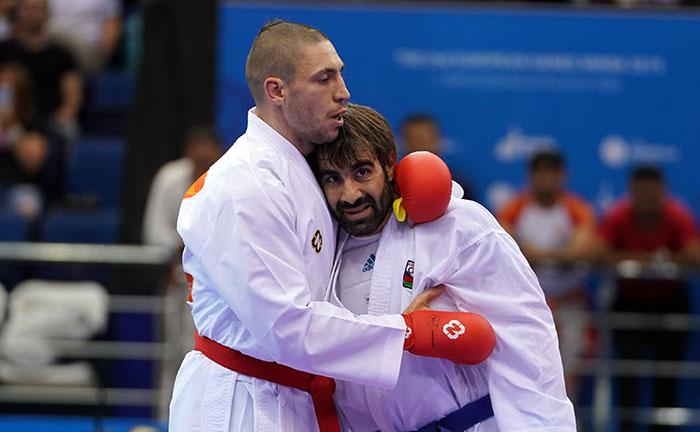 Four years ago in Baku, Austria’s Bettina Plank was close to achieveing one of the biggest achievements of her career when she reached the final of the 2015 European Games. However, the karateka who is placed 4th in the WKF World ranking was defeated in the bout for gold by Turkey’s Serap Ozcelik.

Fast forward four years and the final of Female Kumite -50kg saw the same two competitors head-to-head for gold. Again. However, this time history would be different for Bettina Plank. The Austrian karateka who had the gold medal at the 2015 European Champions as her best result controlled the final bout and recovered from a “Yuko” by Ozcelik to score two “Yuko” and an “Ippon” so to take the title in Minsk. Plank could finally avenge her defeat in Baku four years later.

"Serap is one of the best competitors in this category. She's always on the top and she is one big idol for me. It's always a big challenge to compete against her. She's an amazing athlete and to look at how one competitor can keep this high level constantly is really incredible. This is something that I also want to have, so it's a big motivation for me," said Plank. 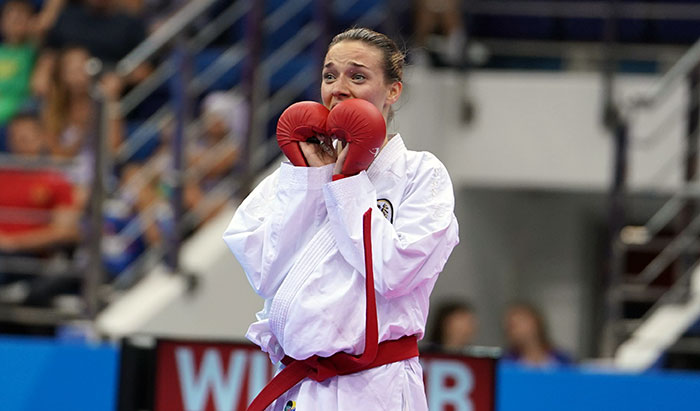 Just as it happened four years ago in Baku, and as it has been the trend in European Championships since 2014, the two gold medals in Kata went to Spanish representatives. Sandra Sanchez and Damian Quintero extended their domination of the category at continental level with a new demonstration of abilities in Minsk.

World champion Sandra Sanchez defeated Viviana Bottaro of Italy in the final while European title-holder Damian Quintero beat Ali Soufoglu of Turkey for the gold medal. It was the same outcome as in Baku Sanchez took the title over France’s Sandy Scordo and Quintero prevailed over Italy’s Mattia Busato.

“Four years ago in Baku, when Karate was not yet an Olympic sport, I won gold and it was very special for me. Now, four years later, here I am, with our sport becoming Olympic in Tokyo and I managed to win gold again. It is very important to me that I can still remain in the elite of the sport both in Europe and in the World,” said Damian Quintero. 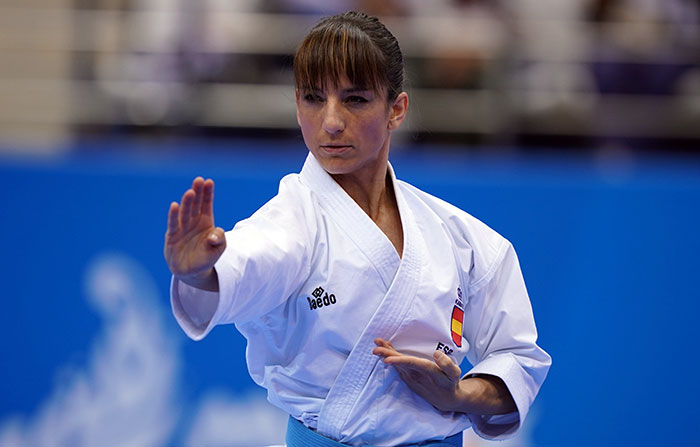 “I feel like if this gold was the first medal that I ever won. I saw the results and I felt like a little girl. This title is extremely important to me. We only have one year to go to the Olympic Games, and I am enjoying an unbelievable season. I just can believe that it is going so well. Sometimes I feel like if I was living a dream,” added Sandra Sanchez.

The 2019 European Games will also be remembered by the revolution of new names taking over the competition. Favourites and ranking leaders struggled to succeed as up-and-coming karatekas registered major upsets in the competition.

That was the case of Latvia’s Kalvis Kalnins who is placed 20th in WKF World ranking and who won his last title in 2017 at the European Championships. The Latvian representative became new European Games champion after beating defending title-holder Firdovsi Farzaliyev of Azerbaijan. 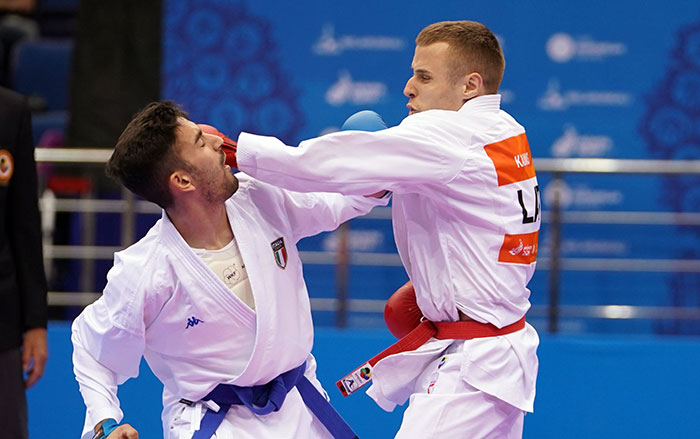 In Male Kumite +84kg, Asiman Gurbanli of Azerbaijan jumped from his position 12 in WKF World ranking to the crown following a victory over Croatia’s Andjelo Kvesic. It was the biggest recognition for Gurbanli who had two gold medals in Karate 1-Premier League events as main achievements.

Meanwhile, in Female Kumite -61kg Anita Serogina of Ukraine shocked front-runners to win the crown and to take her first gold in major international events since her victory at the 2017 Karate 1-Premier League Dubai. The title in Minsk is Serogina’s biggest recognition since her European crown in 2013. 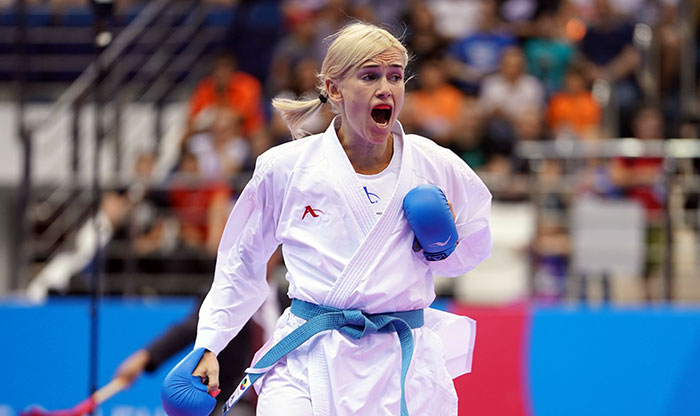 “In a Karate tournament, many things can happen and small details can drive you to victory or defeat, like being lucky etc… It's very great to stand on the gold pedestal because this thing is very rare to my category,” said Anita Serogina.

“It was my dream to get a gold medal here and I managed to take it. This tournament is the big event before the Olympic Games in Tokyo next year, and I am really happy that I could be part of the Minsk 2019 European Games,” added Ivet Goranova.

It was the second appearance of Karate at the European Games and the sport showcased once again its outstanding impact and global appeal. With 38 ries represented at the Karate competition, and with no less than 23 nations taking home medals, the discipline demonstrated to be a truly global sport.

Additionally, Karate captured the attention of the Games and as one of the last sports in the programme, the modality attracted crowds to the magnificent Chizhovka Arena sports hall to enjoy the electric competition.

As an added showcase of the impact of Karate, two representatives of the sport acted as flag-bearer of their ries thus demonstrating the importance of the discipline at the event. Spain's Sandra Sanchez carried the flag of the Iberian ry while Serap Ozcelik headed the Turkish delegation at the closing ceremony in a memorable moment for the sport.

"It’s very exciting and it is an honour to be flag-bearer. It's important for me and it's important for my sport - karate. Now we are going through a difficult moment for karate because maybe the sport will not be d in Paris 2024 (Olympic Games), then this is good to karate to all the world," said Sandra Sanchez.

“I was proud to take the glorious flag of our ry at the closing ceremony. I am happy and honoured to be the flag-bearer at this special moment, “said Serap Ozcelik.

While Karate is getting ready to make its Olympic debut in Tokyo 2020, the sport demonstrated once again its tremendous appeal at the memorable 2019 European Games. 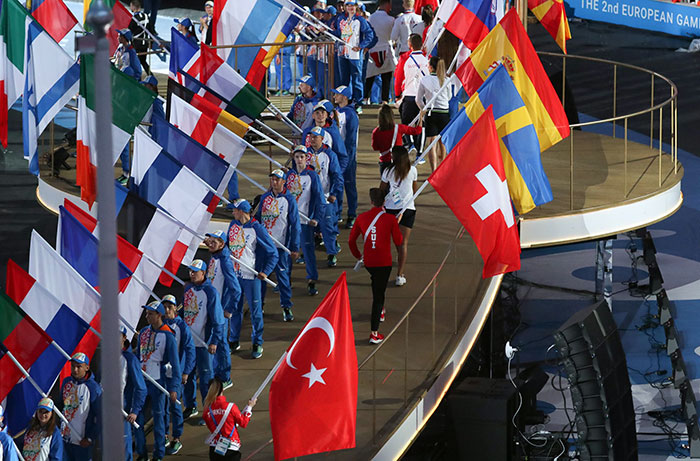