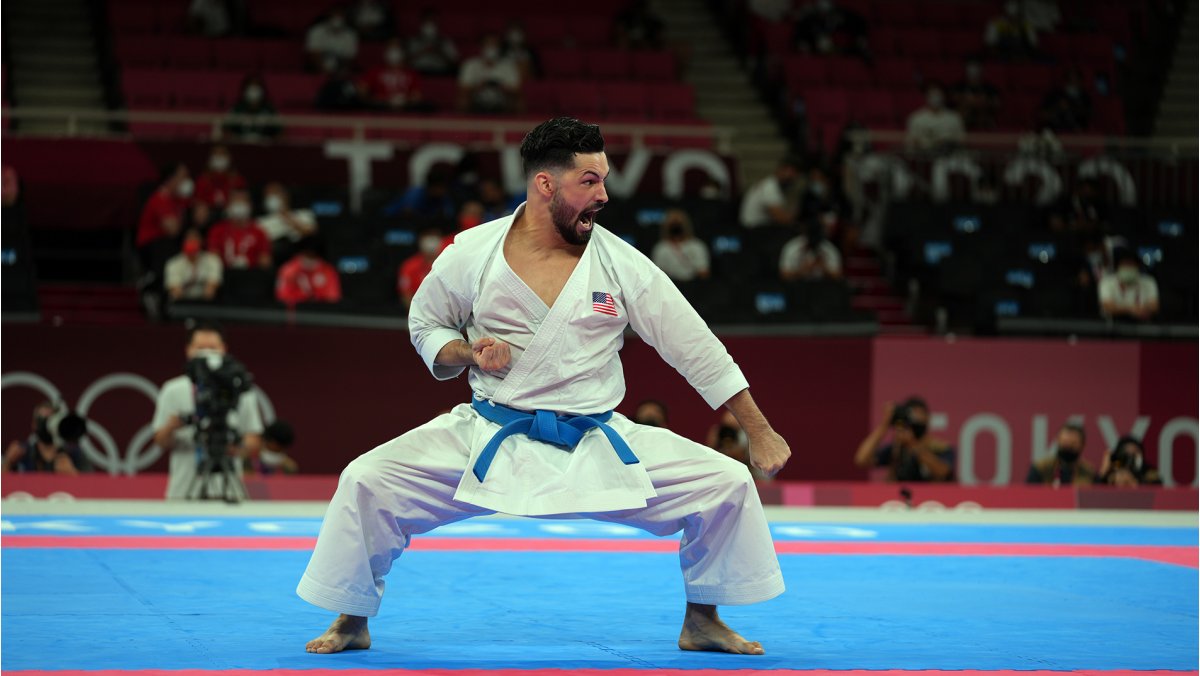 Ariel Torres couldn’t believe he was about to compete at the Olympic Games Tokyo 2020.

Ariel Torres had goosebumps when he was unpacking his bags in the Olympic Village days before Karate’s Olympic bow.

The Cuban-American couldn’t believe he was about to compete at the Olympic Games Tokyo 2020.

“This is by far the most incredible thing in the whole world … until we hopefully get gold,” he says.

“I never imagined as a kid that I’d be here and I’m glad that I never gave up and kept pushing. I am glad that I just kept fighting for my dream.”

Ranked 10th in the world, the 23-year-old is “calm and excited” about taking part in the Male Kata event, which takes place today at the Nippon Budokan.

Torres joins Thomas Scott, Sakura Kokumai and Brian Irr as members of the US Karate team in Tokyo. 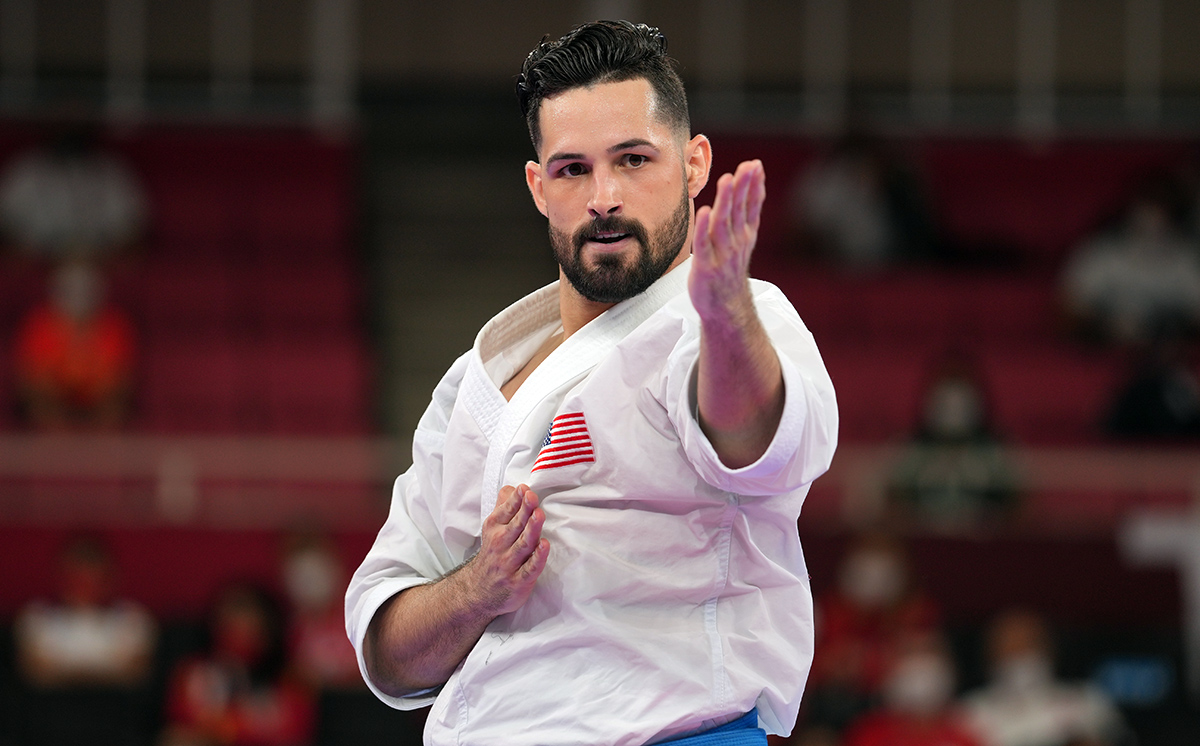 Despite the impact of the coronavirus pandemic on training and Karate tournaments over the past year, the 2019 Pan American Games silver medallist is in a bullish mood.

“My mentality is stronger than ever. Going into the Games, I’m prepared. I have faith in myself and all my skills,” he says.

Born in Cuba, it’s been a long and winding path for Torres to reach the summit of sport in the Japanese capital.

His family moved to the USA when he was 4 to escape the country’s poverty, eventually settling in Hialeah, Florida, where Torres still lives. A hyperactive child, his parents took him to the nearest dojo to burn off some energy; he started practicing Karate at the age of 6.

His parents couldn’t afford to send him to competitions when he was a few years older. So he used to dress up in his Karate uniform and go out with his sister and father asking for donations from car drivers stopped at traffic lights at an intersection in Hialeah. 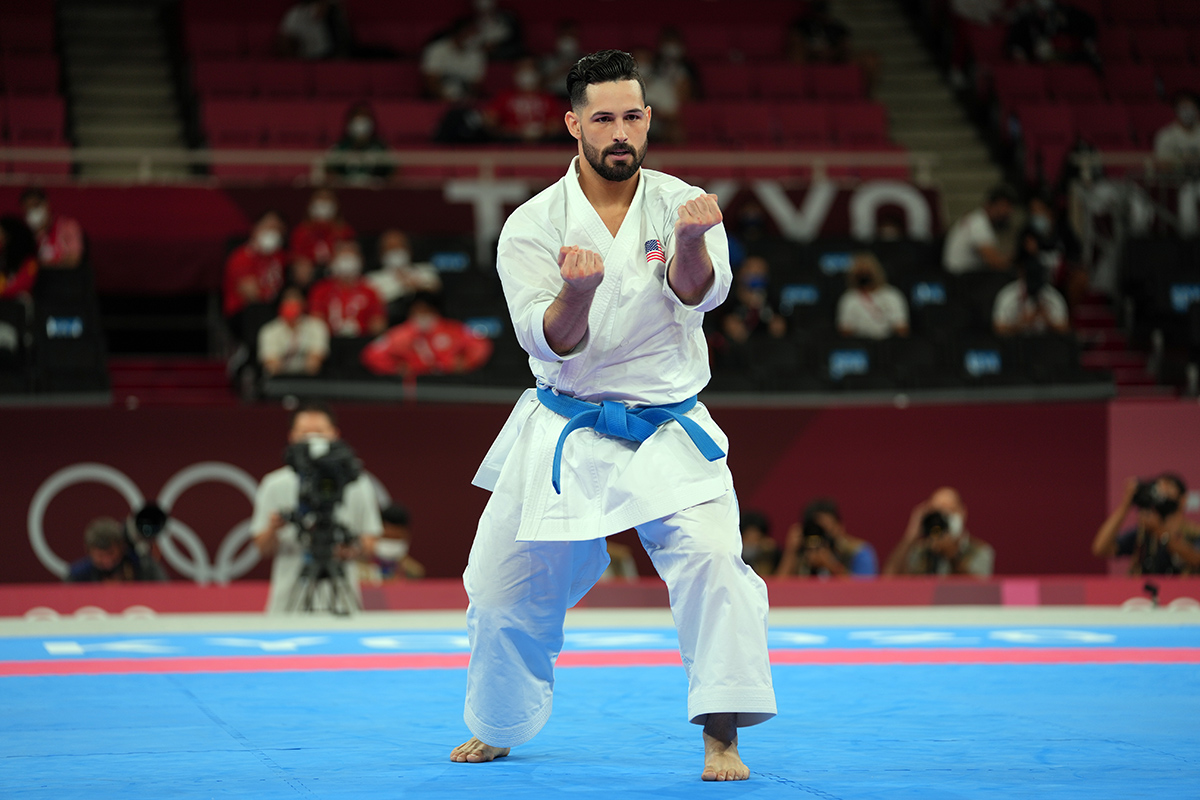 “I couldn’t believe how incredible my community was that they supported me for several years, always giving us money to go to the next event,” he says. From the age of 16 onwards, he competed in adult divisions, using the prize money he won to help his family and fund travel to the next event.

“When I thought I couldn’t afford it anymore, I became a professional Karate athlete with travelling expenses paid for.”

His family can’t be in Tokyo due to COVID-19 restrictions. But his message to them is clear: He can’t praise them enough.

“From the bottom of my heart, thank you so much for never giving up on me,” he says. “You guys never stopped supporting me when I lost and lost and lost again. You just said, ‘chin up and keep pushing forward as long as you love it.’”

Torres used to compete in both Kumite and Kata but following a foot injury in 2015 he channelled his energies into the ‘forms’ discipline. The two-time USA Karate national champion says he doesn’t miss the fighting aspect of Kumite. He has developed an intense passion for Kata. 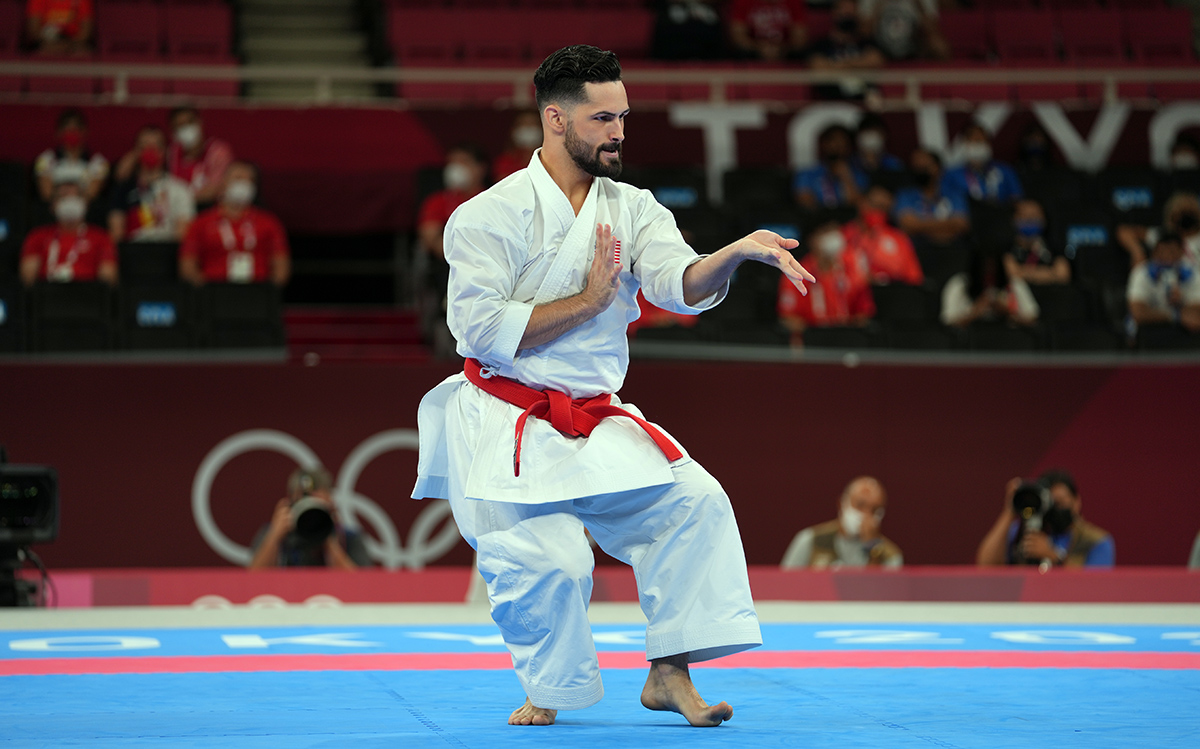 “Cubans have this emotion, it’s in their blood, they are very emotional people,” he explains. “I feel like Kata helps me embody these emotions, to wrap up and release them into a single target and just let it all out.

“In this way, I can just be at peace with myself. When I perform Kata, I feel like I can give back to the judges, to anyone who is watching. I can show them how much I love what I am doing.”

Torres landed gold in Kata at the 2019 Pan American Championships but he’s since had a few wobbles with some important victories being followed by crushing defeats.

Torres has learnt from the losses and improved his craft. His head is in a better place, too. 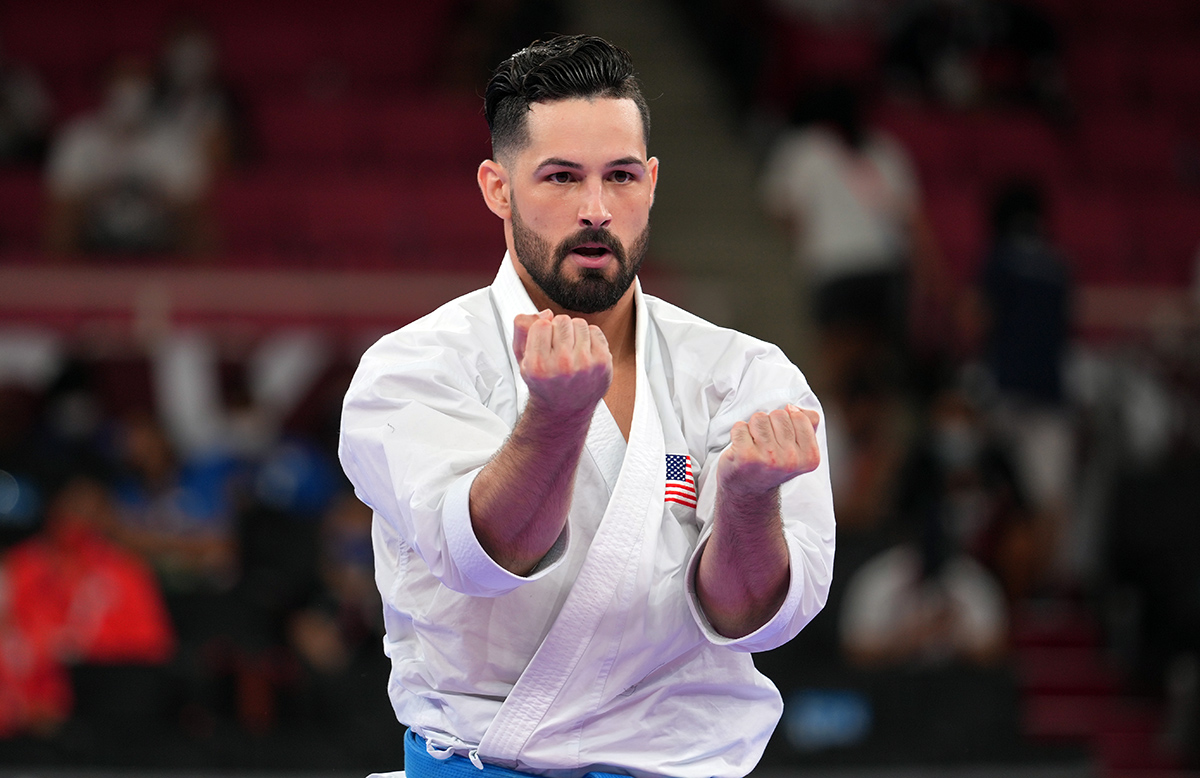 “Mentally, I improved. I understand more about myself and I know what I need to do to be happy and that’s what’s going to help me do the best performance I can do for myself, my family and everyone behind me,” he says.

Torres is quick to identify his biggest strengths as a karateka: “My heart. I carry it out there. I show my emotion when I do my Kata. I try to live every single moment on the tatami.”

He’s aiming for gold in Tokyo but knows it’s a tough ask.

Torres is hoping his lucky underwear bearing the words ‘Olympics 2020’ might aid his mission. He’s been wearing them for every major competition since Karate got onto the Olympic programme in 2016.

“This will be the last competition for this underwear that have been with me for the past five years around the world, competing in all of the events, through all the victories and defeats. I am planning on framing them,” he says, laughing. 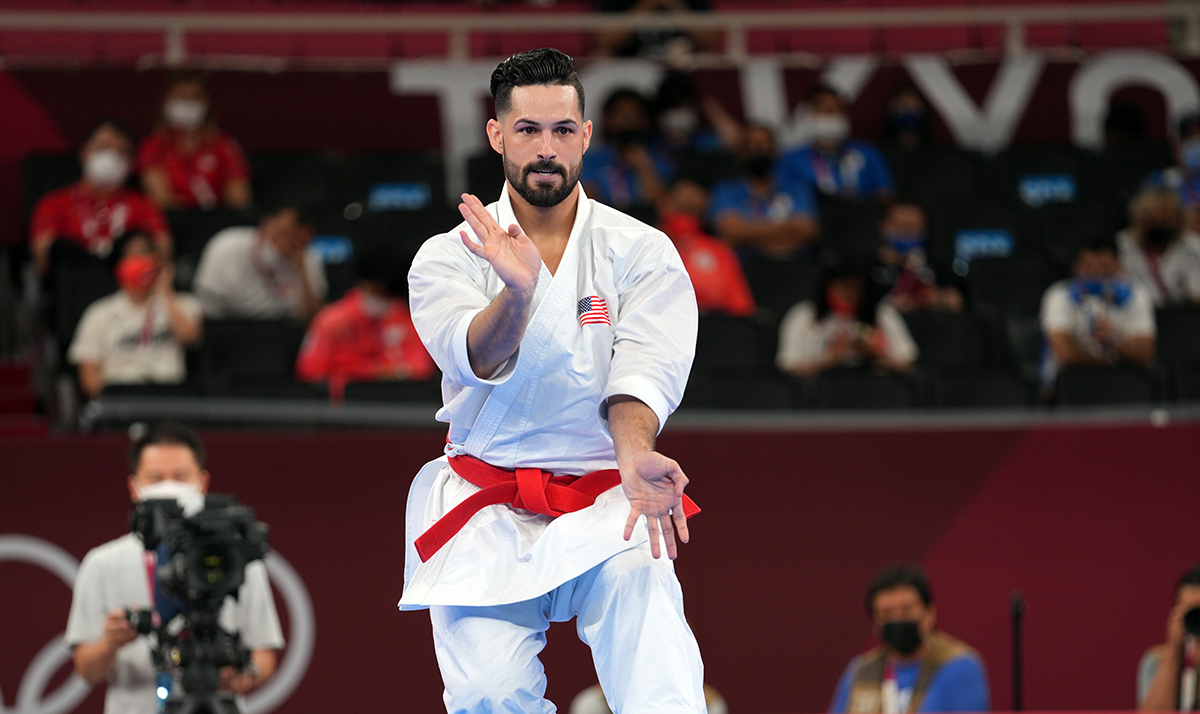 On a more serious note, he singles out Japanese World Champion Ryo Kiyuna and Spanish star Damian Quintero as both inspirational figures and rivals in his title quest.

“I have played all the scenarios in my head, getting the gold medal match, getting the silver and bronze. I have felt the emotion of each match. I know that I can win a medal,” he says.

“The medal I will get will depend on how I wake up, how my competitors wake up because on that day anyone can win, especially if the stars align for them.”

Torres says any medal “would change the life for my family. It’s a great sign to all the Cuban people around the world that are struggling through so many things that if they were just given some freedom … anything is possible, that their dreams can come true.”