Surprises dominate final day of action at The World Games 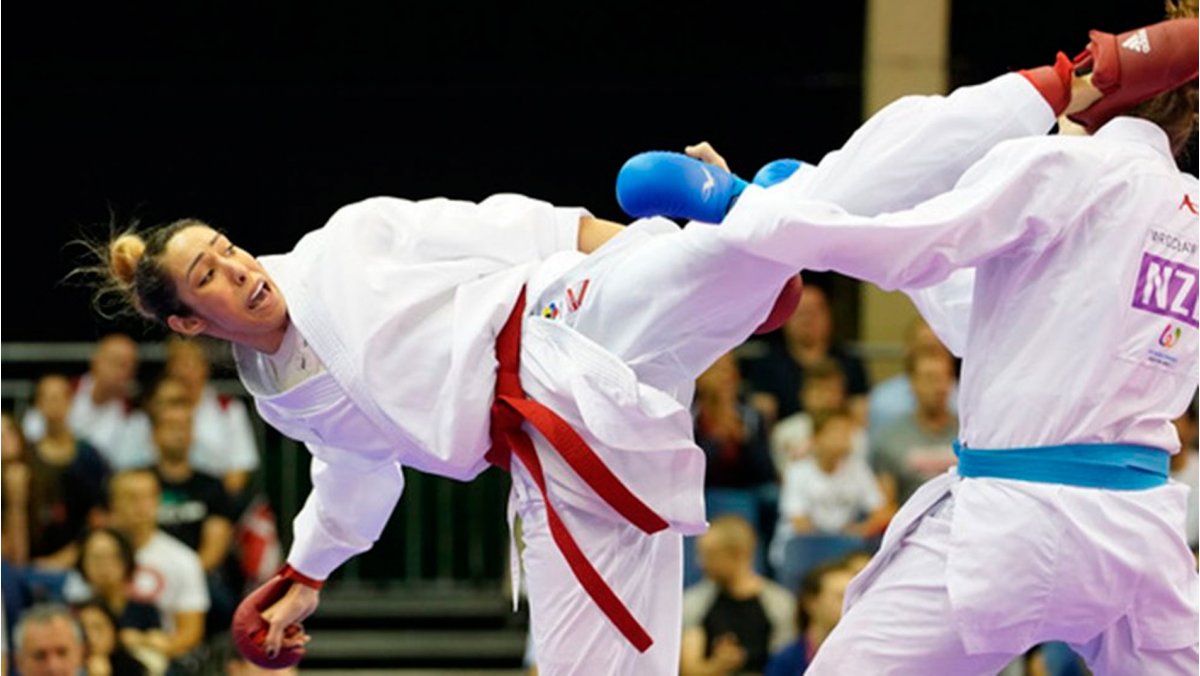 It was a day to remember for Karate fans. The last day of action at The World Games showcased a thrilling quest to gold that crowned the underdogs of the competition. Stanislav Horuna, Zabiollah Poorshab and Hideyoshi Kagawa in male categories, and Alexandra Grande, Lamya Matoub and Ayumi Uekusa in female competition were among the new medallists of The World Games.

It was a day to remember for Karate fans. The last day of action at The World Games showcased a thrilling quest to gold that crowned the underdogs of the competition. Stanislav Horuna, Zabiollah Poorshab and Hideyoshi Kagawa in male categories, and Alexandra Grande, Lamya Matoub and Ayumi Uekusa in female competition were among the new medallists of The World Games.

Peru’s Alexandra Grande produced one of the biggest upsets of the event as the two-time Karate 1-Premier League gold medallist defeated favourite Anita Serogina of Ukraine in the final of Female Kumite -61kg. The Peruvian karateka showed firmness in her performance and claimed a 2-0 victory.

“This victory is for my family, for my coach and for my ry. I have been through a lot in the sport and now I just want to cry and celebrate this gold medal”, said the new gold medallist.

The bronze medal went to Slovakia’s Ingrida Suchankova. The world ranking leader defeated Poland’s Justyna Gradowska by 2-0 much to the disappointment of the local fans.

Algeria’s Lamya Matoub followed the string of surprises and produced one of the biggest shocks of the event. The Algerian karateka, who currently has the 30th position in the world ranking, defeated the World and European champion Alisa Buchinger of Austria in a dazzling outcome of title-deciding bout. The clash ended with 0-0, and the Algerian karateka was named the winner and gold medallist by unanimous decision

In the bout for bronze, Kayo Someya of Japan took one more medal for the successful Japanese delegation. The Asian champion beat World Championships runner-up Katerine Pedersen by 3-0. 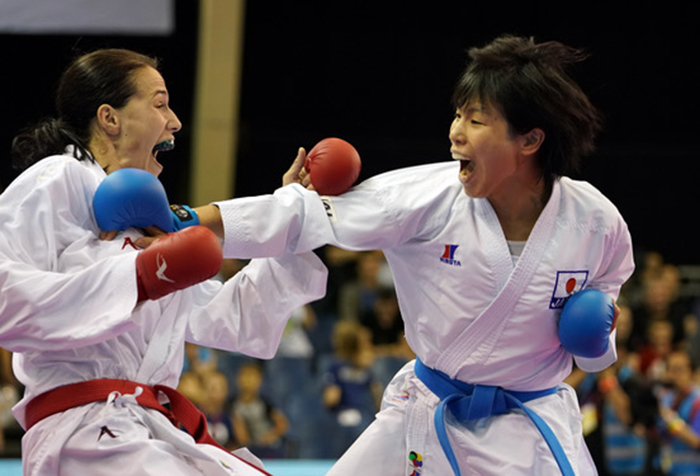 JAPAN PREVAIL AT THE EVENT

Top favourite Ayumi Uekusa claimed a contended victory over Iran’s Hamideh Abbasali. The bout ended at 0-0, and the Japanese karateka was proclaimed winner by unanimous decision.

Anne Laure Florentin of France recovered from the shocking defeat in semifinals and claimed bronze after beating Isabela Rodrigues of Brazil by  2-0.

In a spectacular final bout, Ukraine’s Stanislav Horuna put a golden finish to his impressive performance throughout the tournament. The current European Championships silver medallist was down 1-2 but with the clock seconds to the end the bout, the Ukrainian fan favourite connected an impressive Ura-Mawashi-geri to get an ippon so to put the final 4-2

The third place in the podium was for Brazil’s Hernani Verissimo. The current Pan American champion edged Karate Star Thomas Scott in a thrilling bout that finished 2-0 for the Brazilian karateka. 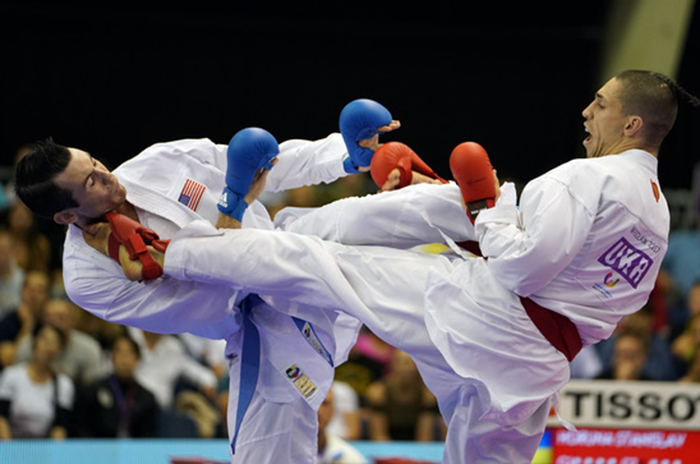 Showing the most powerful version of karate, the final of Male Kumite +84kg presented two thought competitors who engaged in a remarkable exchange of spectacular actions. The victory went to Japan’s Hideyoshi Kagawa who surprised world champion Sajad Ganjzadeh of Iran by a tight 6-5. It was the last of the seven medals that the Japanese delegation has claimed so to top the final standings of the event.

Hosts managed to finish the tournament with a medal. Michal Babos defeated World Championships runner-up Achraf Ouchen of Morocco in Male Kumite +84kg category in a rollercoaster of a bout. The Moroccan karateka had a comfortable lead but the local representative came back and ultimately got the match by ‘Hansoku’. 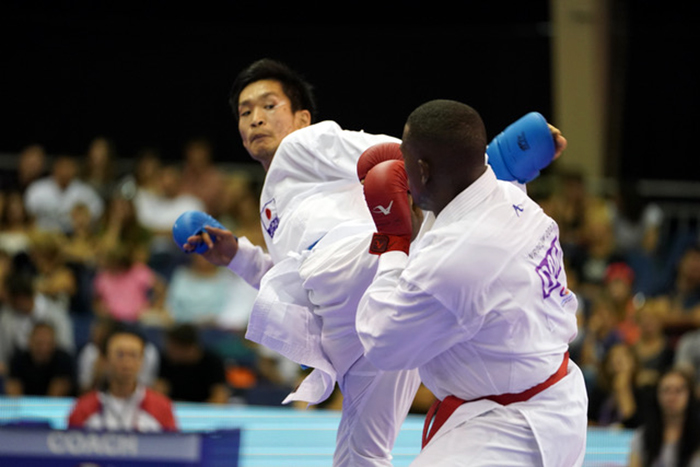 It was one of the most anticipated bouts of the day and it did not disappoint. In a repetition of the final of the 2016 World Championships, Iran’s Zabiollah Poorshab edged world title-holder Ryutaro Araga of Japan by a tight 2-1.

In the bronze medal bout, Turkey’s Ugur Aktas prevented hosts from taking one more medal in the tournament, as the European champion used his favourite status to beat local karateka Kamil Warda (6-1) 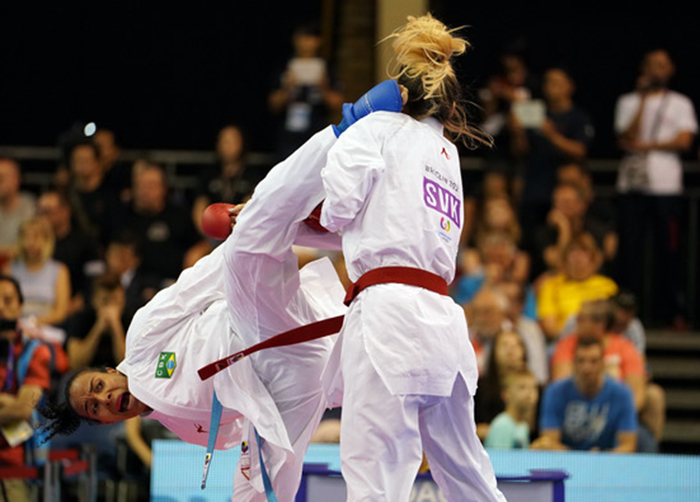