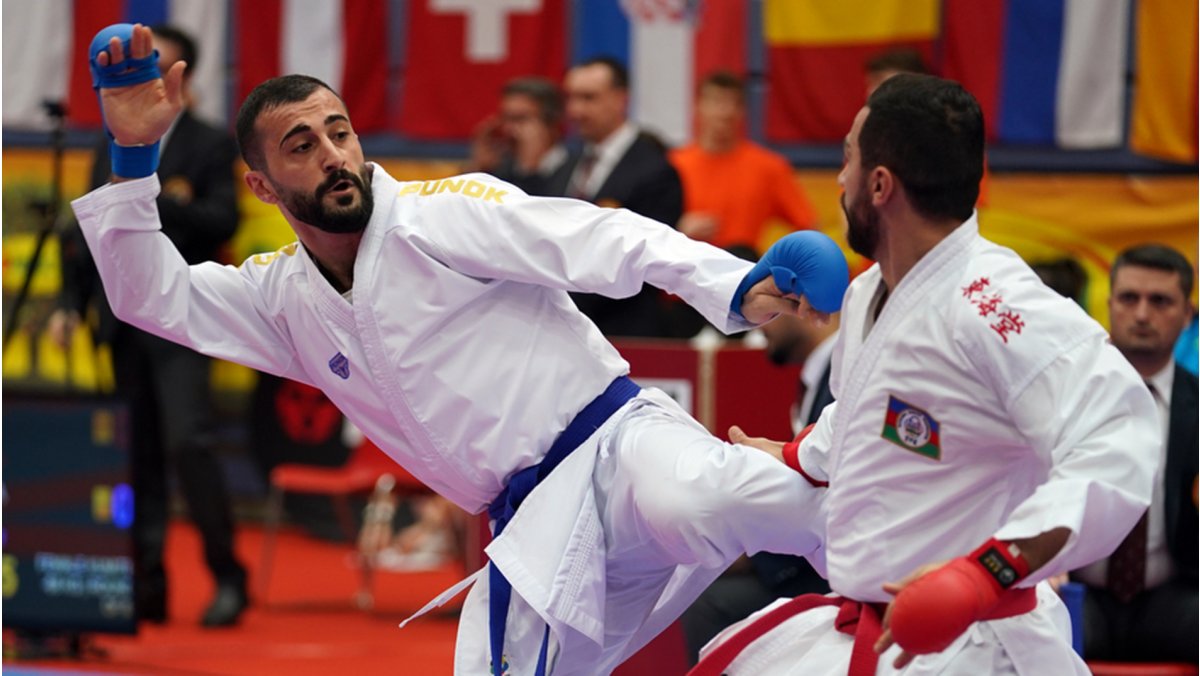 The Sporthalle Alpenstrasse sports hall in Salzburg hosted the second day of competition of the 2020 Karate 1-Premier League Salzburg. Surprises continued shaking up the event as unexpected heroes took the spotlight of the day.

The Sporthalle Alpenstrasse sports hall in Salzburg (Austria) hosted the second day of competition of the 2020 Karate 1-Premier League Salzburg. Surprises continued shaking up the event as unexpected heroes took the spotlight of the day.

Karatekas on the rise succeeded today in Male Kata as the final of the category will have 24-year-old Ali Sofuoglu of Turkey facing 24-year-old Kazumasa Moto of Japan. It will be an unexpected final as Moto has never won gold in Karate 1-Premier League and Sofuglu has not been on top of the podium of Karate’s biggest event in over two years.

Turkey’s Ali Sofuoglu who is the current European Championships runner-up and who won his last title of Karate 1-Premier League in 2018 in Rabat prevailed in his pools and made it to the final after scoring 26.54 with “Kanku Sho” kata. Meanwhile, Kazumasa Moto qualified for to fight for his first-ever title of Karate 1-Premier League following a startling performance in Salzburg. The Japanese karateka took gold for the last time in Karate 1-Series A Montreal last year and surprised favourites with “Gojushiho Sho” kata and a score of 26.48. 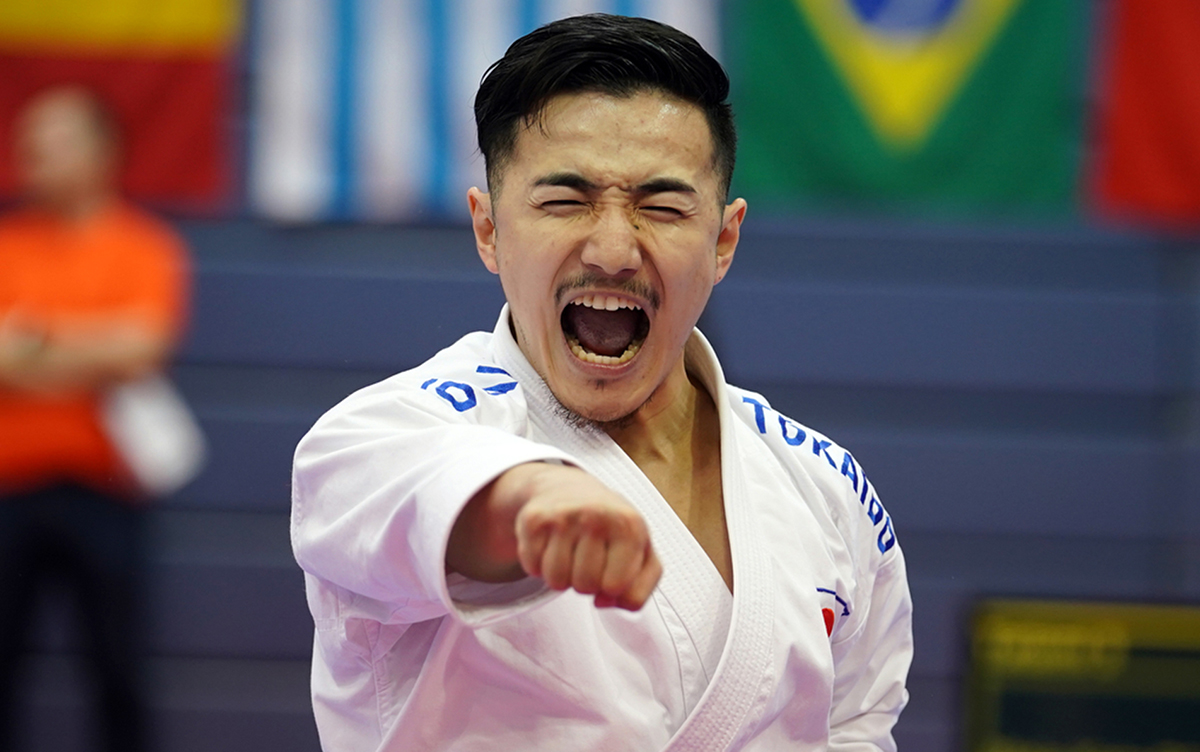 Kazumasa Moto said: “I have never managed to win gold in Karate 1-Premier League. If I win tomorrow, I will take a step forward in my progression. My main purpose though is to defeat Ryo Kiyuna as the best Japanese Kata karateka.”

The Turkish delegation reached their third final of the tournament in Female Kumite -61kg, with Merve Coban showing top form. The current European champion edged Grand Winner Xiaoyan Yin of China in semi-finals (1-1) to qualify for her second final this season.

Merve Coban said: “My draw was very difficult but I managed to reach another final after doing it at the Karate 1 Premier League Paris. I want to keep my position at the Olympic standings and I am very happy to be in the final. I know my opponent is very good but I will do my best to win.” 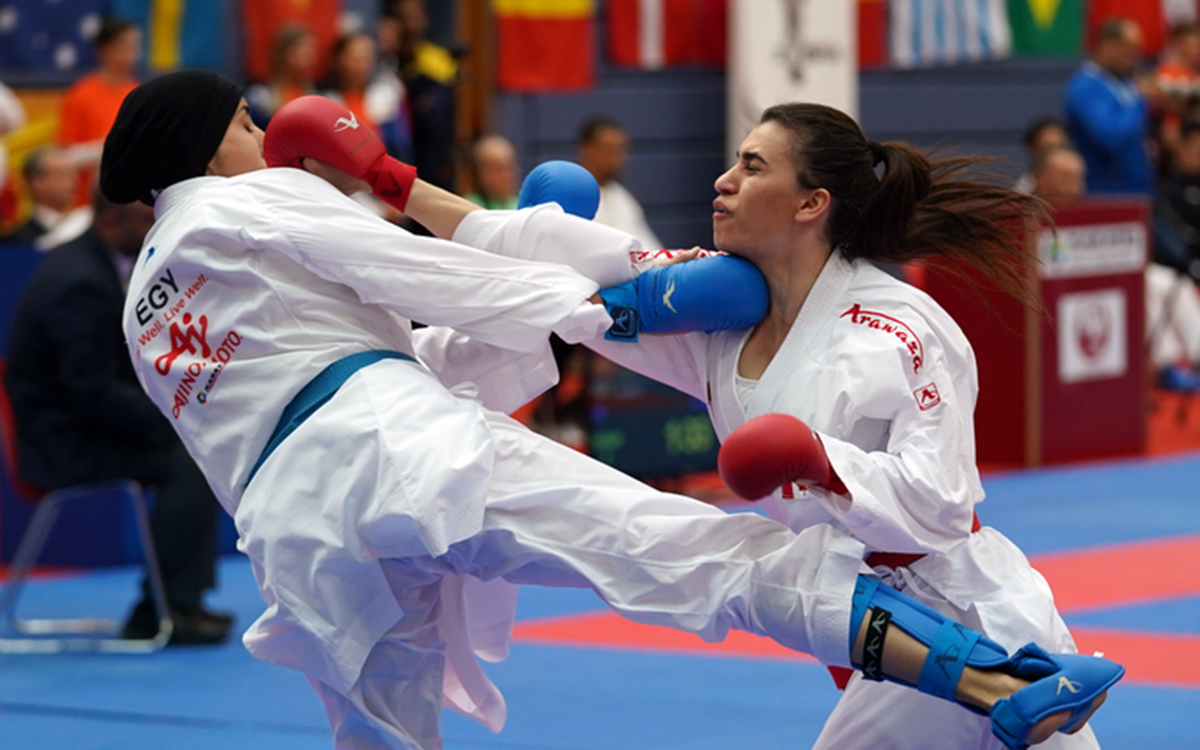 The other finalist in the category is Haya Jumaa of Canada. The top Canadian athlete made it to her first final of Karate 1-Premier League in nearly three years as the last time she qualified for the title-deciding bout was in 2017 in Halle-Leipzig. Jumaa defeated Giana Lotfy of Egypt in semi-finals 1-0.

ONE MORE FINAL FOR UGUR AKTAS

Turkey’s Ugur Aktas continued the impressive demonstration of abilities of the Turkish representatives today and became one of the few Grand Winners succeeding at the event. Only Sandra Sanchez in Female Kata had managed to take the golden karategi to the final in the opening day, and on Sunday it was Ugur Aktas winning the right to represent the Grand Winners on the last day of competition. After a series of tight victories, Aktas managed to qualify for his second final of the season (he won silver at the Karate 1-Series A Santiago) following a 4-2 triumph over Aykhan Mamayev of Azerbaijan in semi-finals.

Ugur Aktas said: “This year is very important to me and to all the athletes; everyone is showing their best form. This is my first final this year in Karate 1 Premier League, and I am very happy. The quarter-final match was the breaking moment for me because I came back and ended up winning the bout. The final will be very key for me because I will be facing the World champion. I will do my best to take the gold medal." 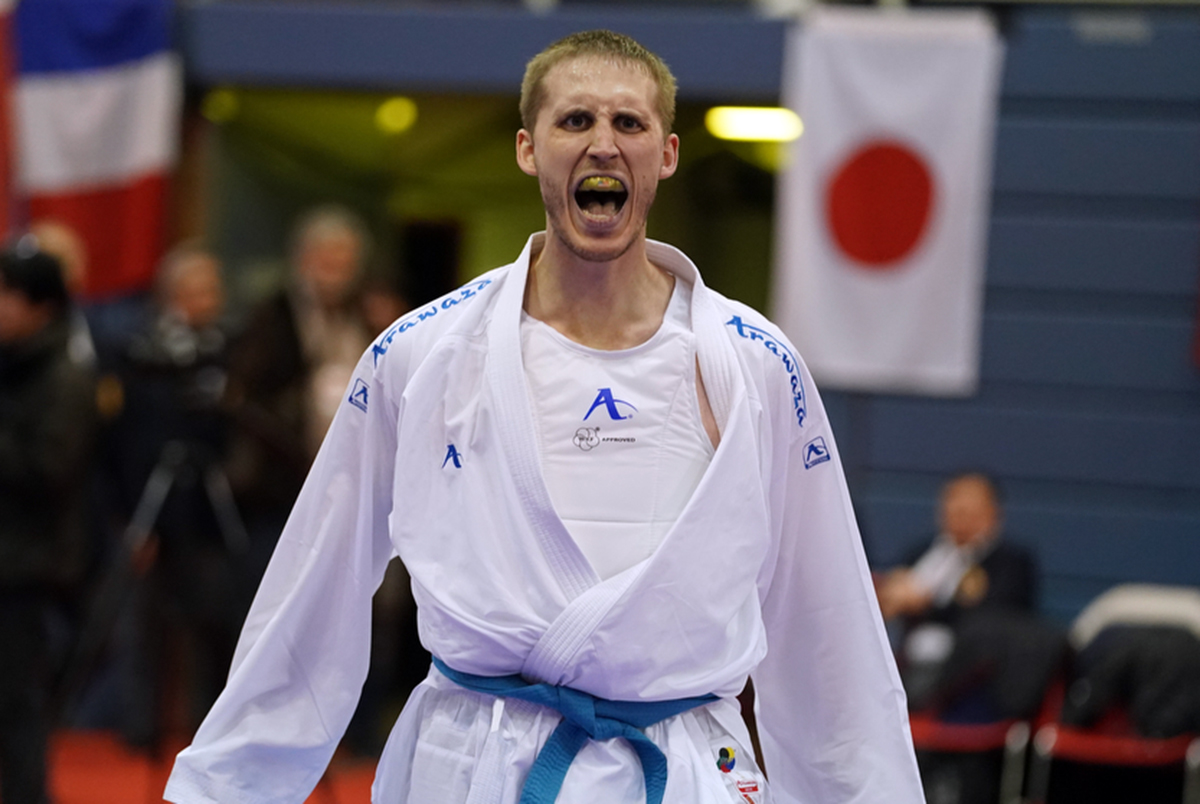 The final of the category of Male Kumite -84kg will be a real clash of titans since Grand Winner Aktas will fight for gold against World Champion Ivan Kvesic of Croatia. The current World title-holder defeated front-runner Zabiollah Poorshab of Iran and made it to his first title-deciding bout since winning silver at the Karate 1-Premier League Shanghai last year.

DAY OF UPSETS IN SALZBURG

The rest of the categories at stake were determined by major upsets and by favourites failing to reach the finals. In Female Kumite -68kg, Feryal Abdelaziz of Egypt produced one of the highlights of the day when she defeated Grand Winner Irina Zaretska of Azerbaijan in a thrilling semi-final. The silver medallist of Karate 1-Premier League Dubai and current African champion beat Grand Winner Zaretska 12-5 and made it to her fourth final this year (silver medals in Karate 1-Premier League Paris and Dubai and gold in UFAK Championships). The title of the category will be contested by Li Gong of China who edged Sherilyn Wold of the Netherlands in semi-finals (1-1). 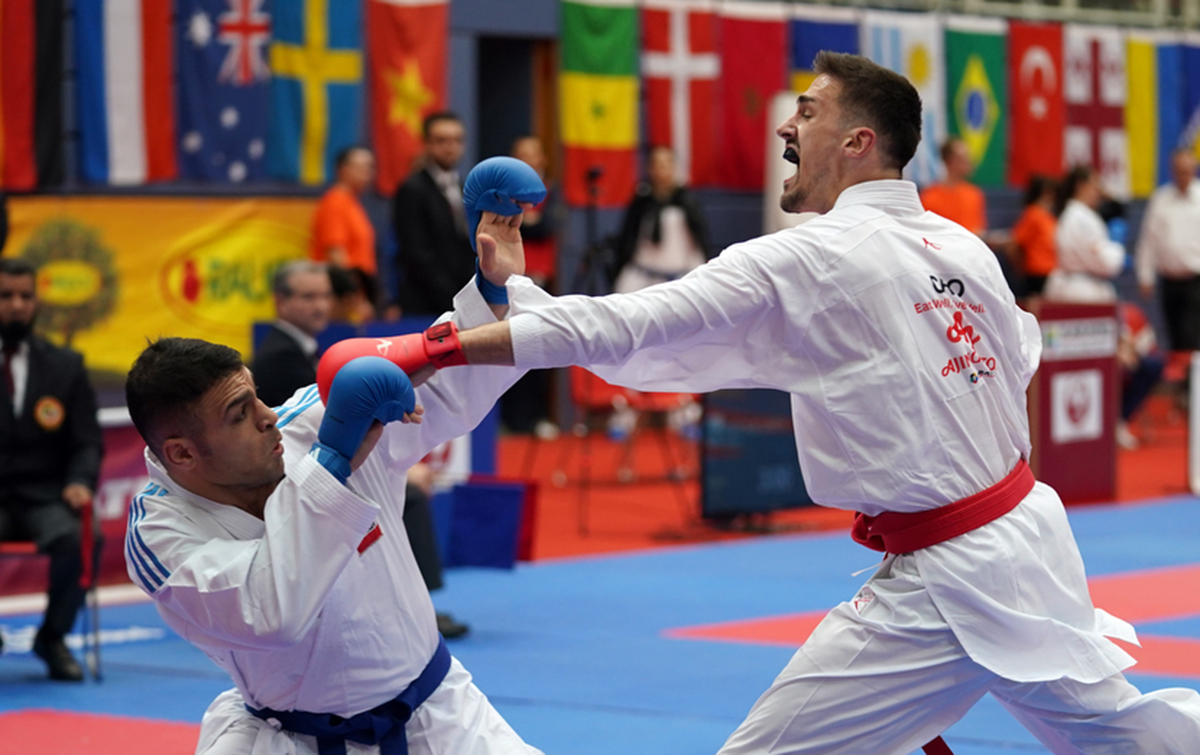 Two newcomers will fight for the title in Male Kumite +84kg. Brian Irr of the USA and Ryzvan Talibov of Ukraine will clash for gold after surprising favourites along the way. It is the first final of Karate 1-Premier League for Brian Irr who has the continental crown in 2018 as his best result. The representative of Team USA edged Gogita Arkania of Georgia in semi-finals 3-3.

Meanwhile, Ryzvan Talibov also surprised with his qualification to the final. Talibov had never reached the medal stage of an international event and qualified to his first title-deciding bout following a tight victory over Asiman Gurbanli of Azerbaijan 4-4. 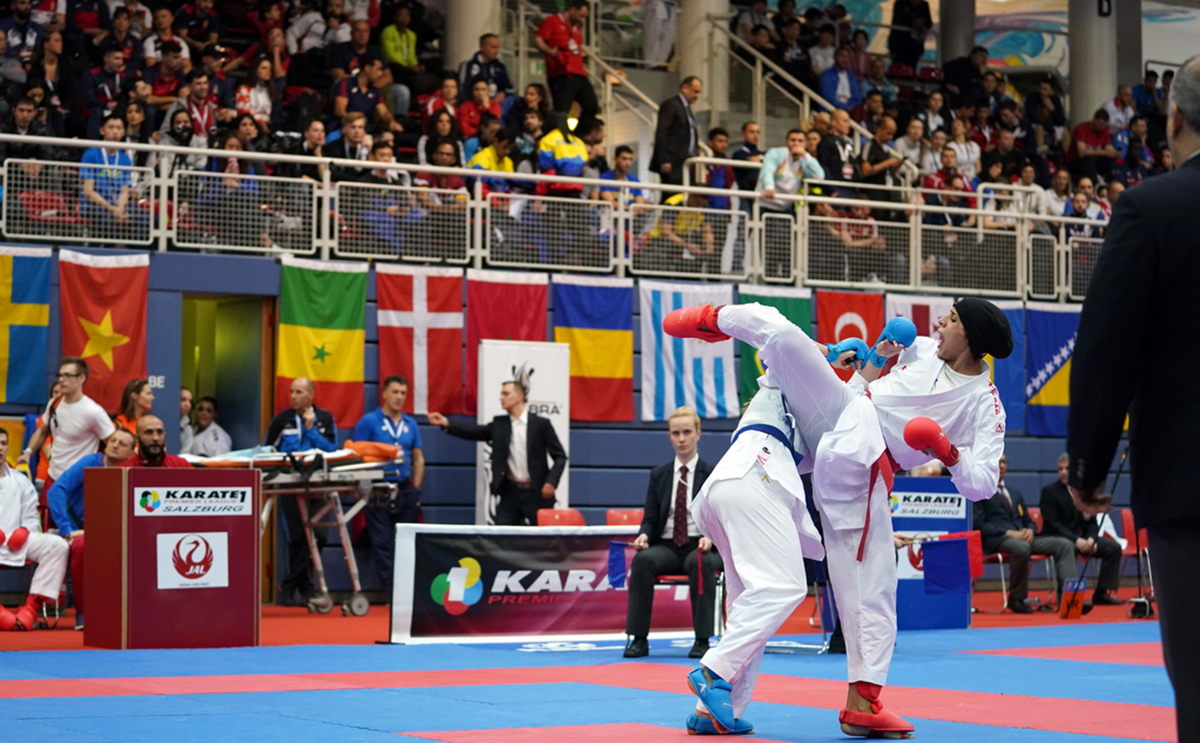 The category of Female Kumite +68kg will have Hamideh Abbasali of Iran and Clio Ferracuti of Italy fighting for gold. Abbasali had taken gold in Paris and reached the final stage in Salzburg after beating Maria Torres of Spain 4-3. Ferracuti had been away from the finals of Karate 1-Premier League since her silver at the event in Tokyo last year. The Italian representative upset Charlotte Grimm of Germany in semi-finals 1-0.

The clash Spain vs Belarus in Female Team Kata completed the list of finalists of the day. CLICK HERE to go to all the info on the event including results and competition programme.