Suprises and emotion on first day of Karate World Championships 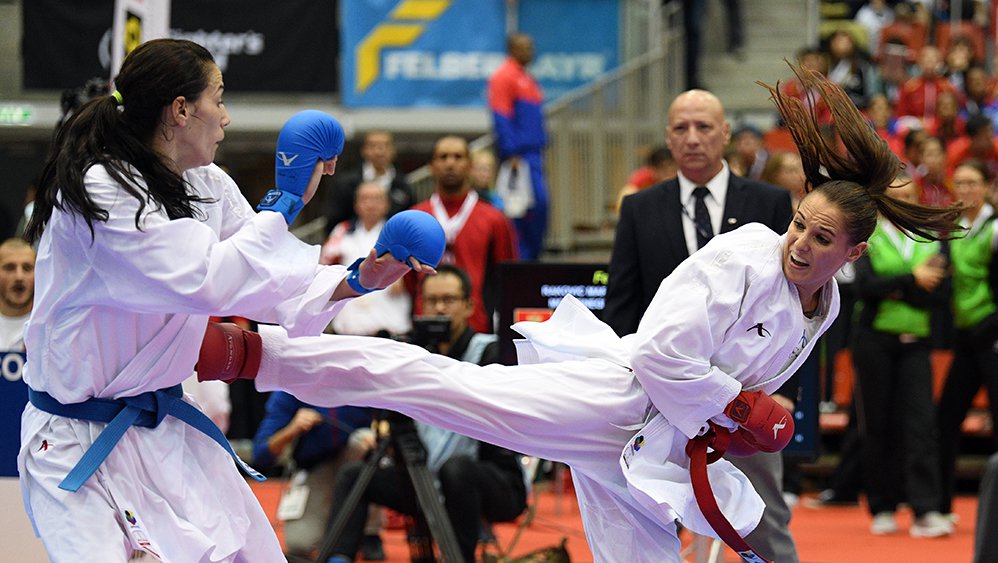 Surprises appeared early over the five tatamis installed in the Tips Arena sport hall in Linz. Egypt Sarah Sayed became one sensation of the day after qualifying for the final of the spectacular Female Kata category. The 21st placed in the world ranking shocked favourites and got the spot in the final in a tight semi-final bout against Italy’s Viviana Bottaro. The young Egyptian karateka was not among the candidates to glory in Linz and had not made it to the podiums of major international events since 2014. However, the promising star showed great determination on her quest to cause a sensation in the biggest Karate event.

“It is the first time in history of Egyptian karate that a female reaches the kata final so of course I am very happy. I made a lot of sacrifices to be here and at the end of the day, all that I did was worth it,” said Sarah Sayed, who admitted that her performance “surprised myself. I over exceeded my expectations.”

“I am very happy with how people reacted to my victories and how great it was to make my country so proud. Kiyou Shimizu is a very respected competitor, but I came here to be the first,” commented the Egyptian sensation.

On the other side of the tatami, the current world champion Kiyou Shimizu will try to earn her second consecutive gold in the competition. The impressive karateka demonstrated her potential during the pool round after winning every bout in unanimous decisions. In one highlight of the tournament so far, defending champion Shimizu and world ranking leader Sandra Sanchez of Spain met in an outstanding clash. The big winner of the 2016 Karate 1-Premier League from Spain presented a high level performance, but Kiyou Shimizu confirmed her star status and qualified for her second final in a row.

Spain vs Japan in Male Kata

The Male Kata competition was just as thrilling, with plenty of favourites trying to shine in the top event of the sport. Showing a flawless performance, Spain’s Damian Quintero qualified for his first final in World Championships, thus confirming his condition of world ranking leader. The European champion defeated on his way to final current silver medallist Ilja Smorguner of Germany, as well as Egypt’s Ahmed Shawky to try to put a golden finishing touch to a sensational season. 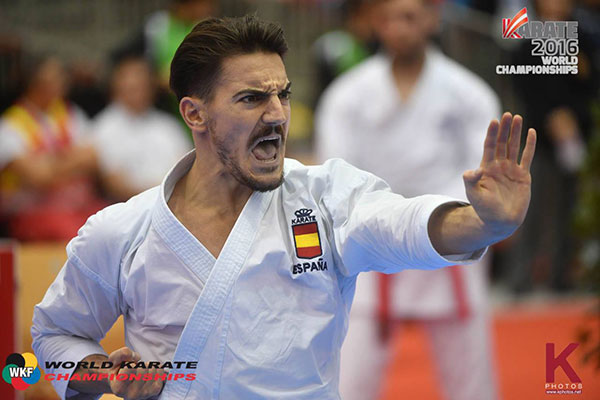 Current world champion Ryo Kiyuna extended Japan’s success in the first day, and earned a spot in the final after presenting an outstanding performance in Linz. The 26-year old karateka hopes to continue the Japanese domination in the category, so to earn his second consecutive gold medal. Kiyuna starred in one of the biggest clashes of the day, the semi-final against two-time world champion Antonio Diaz of Venezuela. In a split decision, Kiruna defeated the Venezuelan hero after two magnificent katas.

The fruitful participation of representatives from the birth nation of the sport continued in the Kumite categories. Japan’s Ryutaro Araga confirmed the forecast and qualified for the final bout in Male Kumite- 86kg in a dominating performance. The Japanese Karate Star beat Venezuela’s Cesar Herrera in the semi-final so to make it to his first final in World Championships.

Azerbaijan’s Aykhan Mamayev became other of the big names of the day after qualifying for the title-deciding bout of the championships. The fifth placed in the world ranking shocked current world champion Gogita Arkania of Georgia in the pool tree round, and confirmed his ticket to the final following his victory over France’s Kenji Grillon.

The third ticket to the final for Japan was earned in Female Kumite +68kg. Japanese Ayumi Uekusa closed the impressive day for the representatives of the Asian country after reaching the key match following her victory over Hamideh Abbasli of Iran.

Uekusa’s rival in the final will be Eleni Chatziliadou of Greece. The young karateka produced other big upset of the day after making it to the title-deciding bout in her second appearance in major international competitions. 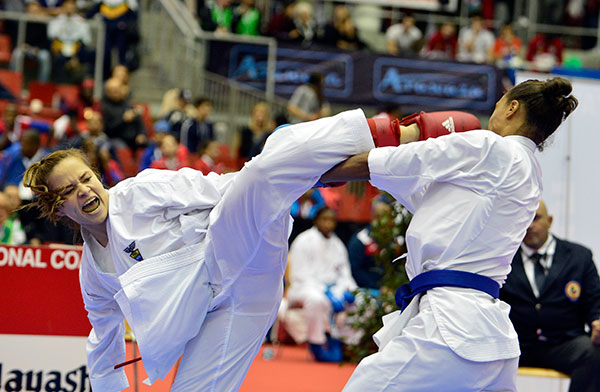 The gold medal of Male Kumite +84kg will be decided between two young rising stars, Achraf Ouchen of Morocco and Sajad Ganjzadeh of Iran. The 2015 World Junior, Cadet and U21 Championships gold medallist from Morocco reached the final clash after beating Belarus’ Andrei Grinevich, and made history for his country.

“It is a great feeling to be in the final and represent Morocco, since it is a big achievement for Moroccan Karate to be in the final of senior world championships,” commented Ouchen. “My intention is presenting a good image of Moroccan karate and do my best.”

As a debutante in World Championships, Iran’s Sajad Ganjzadeh broke all forecasts and made it to the last bout of the event. Iranian upcoming karateka beat Haris Sujkovic of Bosnia and Herzegovina thus continuing the traditional good performances of Iranian Karatekas in world championships.

Austria’s Alisa Buchinger gave hosts many reasons to celebrate as the local star made it to the final of Female Kumite -68kg. The celebrations on the Austrian side were double since the 24-year old achieved her biggest success on her birthday. The Salzburg-born athlete used the home ground factor and the support from family and friends from the stands to defeat Marina Rakovic of Montenegro in the semi-final so to make her Karate dream come true. 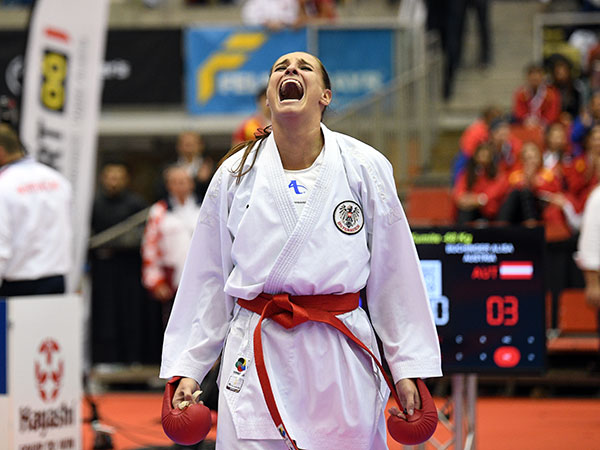 “I can’t describe my feelings; it is my biggest wish and now it came true, and in my birthday it is the best present that I could give myself,” declared the European championships runner-up. “It was great, I had great fights so far, and I hope that I can continue like this and get my gold medal on Sunday,” said Buchinger.

The other finalists is Katrine Petersen from Denmark. The Danish karateka beat Gitte Brunstad of Norway in the semi-final so to achieve the second final of her career.

The Male Kumite -75kg competition did not disappoint and became one highlight of the event as top karatekas clashed in spectacular bouts. Superstar Rafael Aghayev confirmed his status as one of Karate’s biggest legends after reaching his seventh final in World Championships. The four-time gold medallist defeated Aliasghar Asiabari of Iran in a disputed bout, thus increasing his outstanding tally. In his quest to a fifth gold medal, Rafael Aghayev aims at continue signing historic performance as one of most awarded Karatekas of all times. 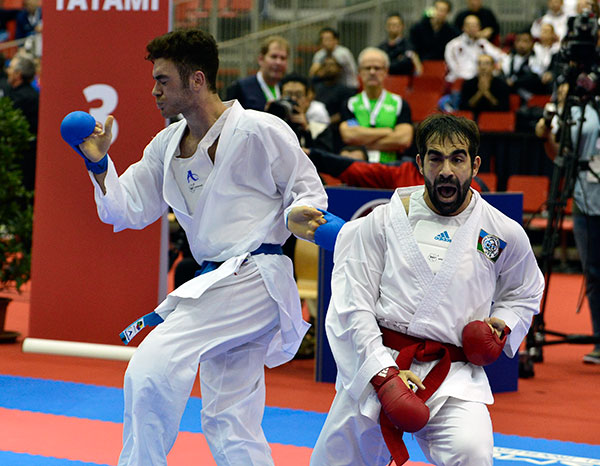 Omar Abdel Rahma of Egypt. The young karateka completed the impressive day for Egyptian delegation, and after his two medals this season in Karate 1-Premier League, the rising figure will try to dethrone one of Karate’s biggest heroes. The young Egyptian upset current silver medallist Luigi Busa of Italy to qualify for the final.

The bronze medal quest in the category will also be one moment to follow for fans since two of the top athletes of today’s Karate, runner-up Busa and USA star Thomas Scott will meet in an anticipated bout.

The first day of action in Linz also served to showcase the always inspiring Para-Karate competition. The Para-Karate athletes demonstrated their impressive abilities and amazed fans with the katas of the Intellectually impaired category.