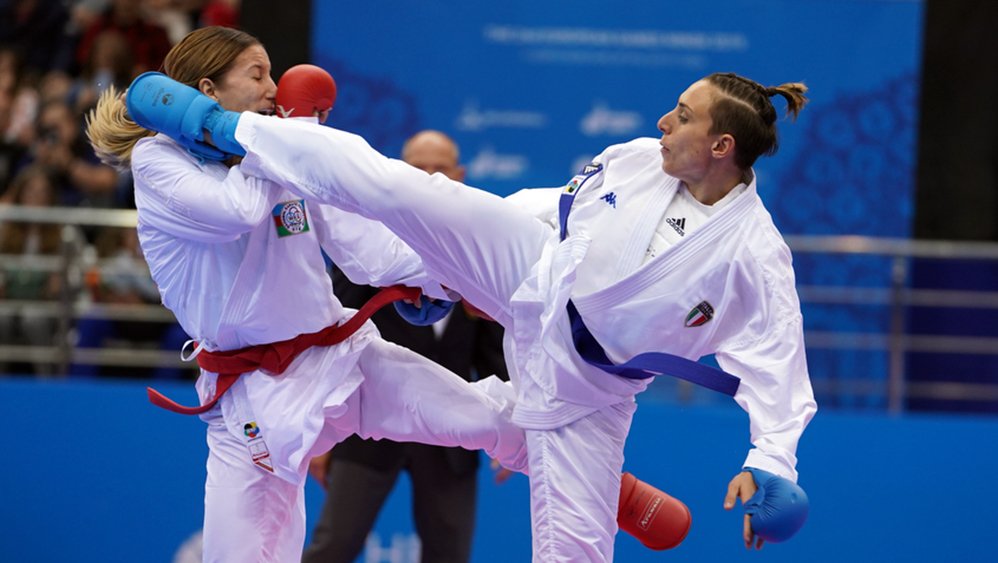 It was a memorable day of Karate action in Minsk (Belarus) as the Karate competition of the 2019 European Games begun in Chizhovka Arena sports hall. Representatives of Spain and new names of the sport dominated the thrilling opening day. Spain’s Sandra Sanchez, Damian Quintero,  and Laura Palacio, Ivan Kvesic of Croatia, Silvia Semeraro of Italy and Asiman Gurbanli of Azerbaijan were the gold medallists today.

It was a memorable day of Karate action in Minsk (Belarus) as the Karate competition of the 2019 European Games begun in Chizhovka Arena sports hall. Representatives of Spain and new names of the sport dominated the thrilling opening day. Spain’s Sandra Sanchez, Damian Quintero, and Laura Palacio, Ivan Kvesic of Croatia, Silvia Semeraro of Italy and Asiman Gurbanli of Azerbaijan were the gold medallists today.

Spain showed an outstanding level in Minsk with a tally of three gold medals today. Athletes of the Iberian nation presented a remarkable performance in Kata with the two titles at stake. Sandra Sanchez extended her record-breaking medal streak and claimed her 42nd consecutive award in international competitions.

The current World and European champion added her second European Games crown to her sensational tally of honours after completing a dominating performance in Minsk. The WKF World ranking leader from Spain defeated Viviana Bottaro of Italy in the final after taking a score of 27.32 with her “Chatanyara Kushanku” kata (Score of 26.14 for Bottaro). 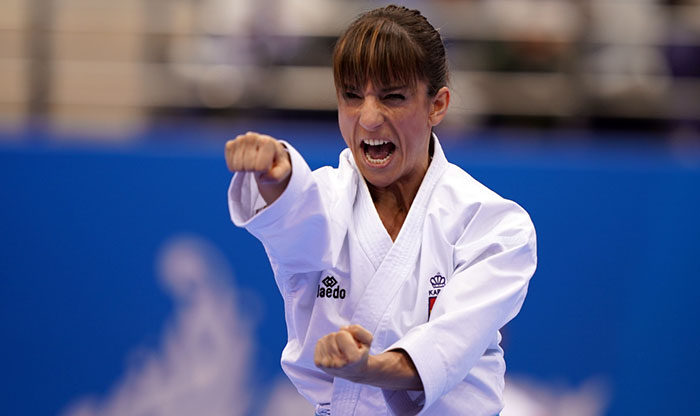 “I feel like if this gold was the first medal that I ever won. I saw the results and I felt like a little girl. This title is extremely important to me. We only have one year to go to the Olympic Games, and I am enjoying an unbelievable season. I just can believe that it is going so well. Sometimes I feel like if I was living a dream. All of this gives me more strength to keep on working hard,” said Sandra Sanchez.

The second title for Spain was taken by Damian Quintero who won the crown in Male Kata. The Spanish European champion claimed his second consecutive title at the European Games and extended his domination of the category with an impressive demonstration of Kata abilities. Damian Quintero took a score of 26.88 with his excellent “Anan Dai” kata and defeated Ali Sofuglu of Turkey who got a score of 25.60. 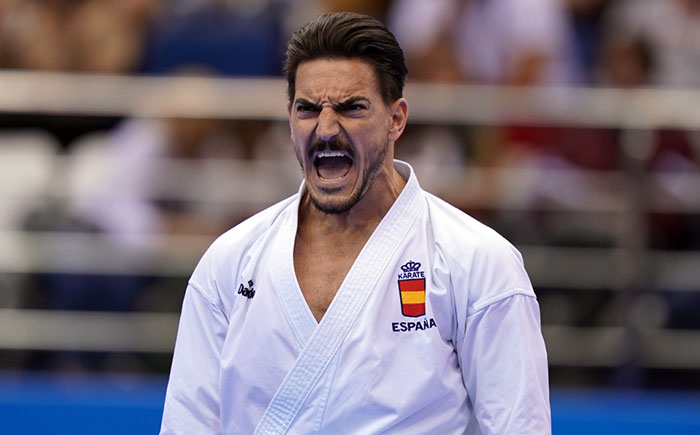 “Four years ago in Baku, when Karate was not yet an Olympic sport, I won gold and it was very special for me. Now, four years later, here I am, with our sport becoming Olympic in Tokyo and I managed to win gold again. It is very important to me that I can still remain in the elite of the sport both in Europe and in the World. It shows the great work and all the efforts in terms of training, physical preparations, nutrition, planning of the season etc.. that we are doing with our coach Jesus del Moral,” said Damian Quintero.

Laura Palacio won the last gold for Spaniards today. The current European champion went straight to victory from the onset of the final bout in Female Kumite +68kg after upsetting Turkey’s Meltem Hocaoglu (4-1). Palacio took an early lead 2-1 and then managed to claim two more “Yuko” to put the final 4-1 in the score-board.

“This is such a difficult tournament, with such great competitors. It is very complicated to prevail. All the karatekas here have an outstanding level and you need to be perfect to take good results. You really need a perfect performance in all the bouts. I did not have the qualification to the final on my mind; I was just going bout by bout. At the European Championships, I could not believe that I got to hear the national anthem, and now here I am again with our national anthem,” said Laura Palacio. 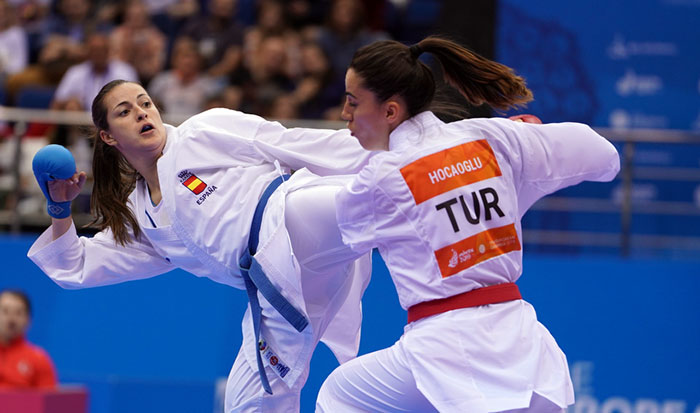 Italy’s Silvia Semeraro produced one of the biggest upsets of the day with her title in Female Kumite -68kg. The Italian karateka who had a bronze medal in the European Championships as the only award this season, defeated World champion and top favourite Irina Zaretska in the final (5-1). Semeraro took early control of the bout with a “Yuko” and an “Ippon”. Despite current title-holder Zaretska’s attempts, the Italian athlete claimed one more “Yuko” to end the bout 5-1.

“I am very happy because this is the result of very hard work. We are going into the Olympic qualification process and I try to bring home as many medals as possible. I have always dreamt of succeeding at the European Games, and now I can go home with this beautiful medal. I want to dedicate this award to everybody, to the whole world, to all of those who have supported me so much,” said Silvia Semeraro. 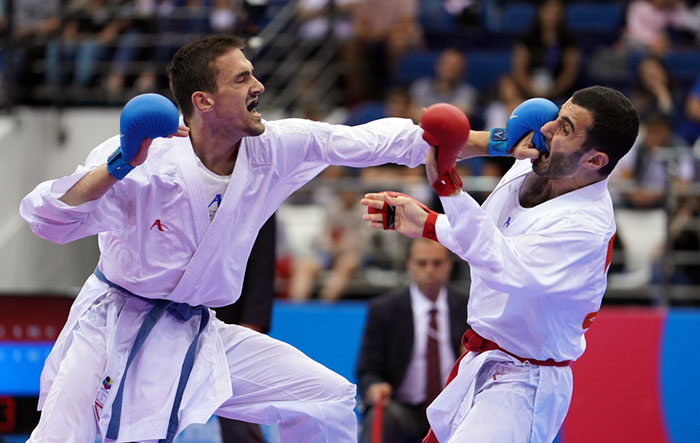 Ivan Kvesic of Croatia won the gold medal in Male Kumite -84kg in a true clash of titans. The final saw World champion Ivan Kvesic facing European title-holder and Grand Winner Ugur Aktas of Turkey. In a very technical bout, none of the finalists could score so the match was decided by “Hantei” or decision with the gold going to Kvesic.

“It was a great motivation for me to beat Ugur Aktas who is the WKF World ranking leader. Now I can collect a lot of points for the Olympic ranking. The bout was a technical battle and it went to the referees’ decision. I am very happy to get this gold,” said Ivan Kvesic.

Action continues on Sunday with the rest of the categories at stake. 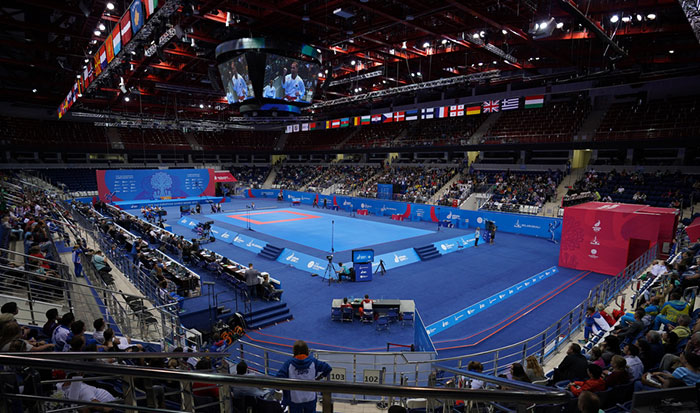