Spanish and Turkish representatives prevail in day 1 of #EuroKarate2019 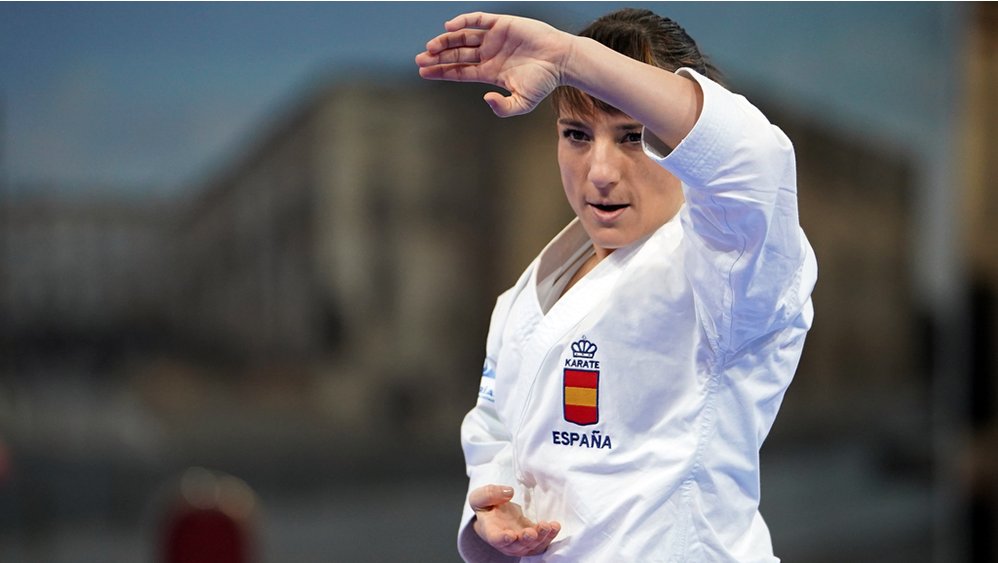 The Spanish delegation enjoyed an impressive start of the 2019 European Karate Championship and confirmed its powerhouse status by placing three representatives in the finals. Damian Quintero, Laura Palacio and Sandra Sanchez used the home-ground factor in their favour to qualify for the title-deciding bouts. Turkey with four spots in the finals and first-class karatekas such as Jonathan Horne and Steven Dacosta took the spotlight of the first day of competition of the tournament which is held in Guadalajara (Spain).

The Spanish delegation enjoyed an impressive start of the 2019 European Karate Championship and confirmed its powerhouse status by placing three representatives in the finals. Damian Quintero, Laura Palacio and Sandra Sanchez used the home-ground factor in their favour to qualify for the title-deciding bouts. Turkey with four spots in the finals and first-class karatekas such as Jonathan Horne and Steven Dacosta took the spotlight of the first day of competition of the tournament which is held in Guadalajara (Spain).

Sandra Sanchez dominated the Female Kata competition. The local star qualified for the final after excelling in her performance of “Papuren” kata thus leading the final pool with the highest score (27.64).

“Each final that I get to play is different and this one is very special because it is in Guadalajara, where everything started for me. It will also be my fifth continental final and my nephews will be here so it will be special because I want to dedicate it to them,” said World ranking leader Sanchez. 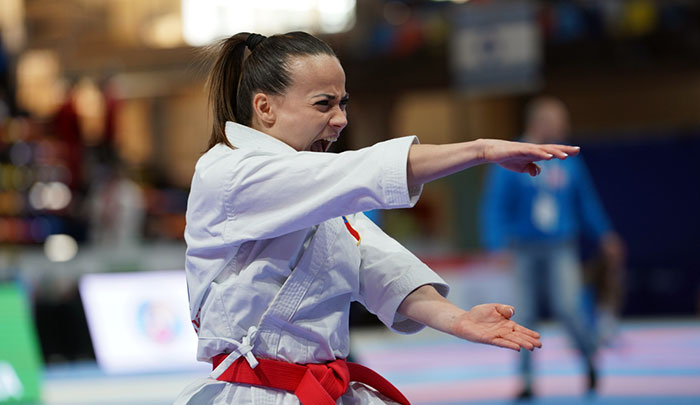 In a repetition of the final last year, Viviana Bottaro of Italy also confirmed her front-runner status after qualifying for her fifth continental final. The third-placed karateka in WKF World ranking presented an excellent “Papuren” kata and prevailed in the pool with a score of 26.94.

“It was a goal that I was really aiming for. It was very important for me to be in the final in order to confirm my level. I am very happy for having the opportunity to participate in this final,” said Bottaro.

QUINTERO VS SOFOUGLU IN MALE KATA

Damian Quintero of Spain also aims for the continental title at home. The Karate Star proved too strong and prevailed in the pool of Male Kata with his rendition of “Suparinpei” kata (26.76 score).

“I am especially thrilled to be in this final because I have the opportunity to try to win my sixth continental gold in individual competition, which has never been achieved in Spain. It is very special for me because in this tournament I am actually feeling the support from the stands,” said Quintero. 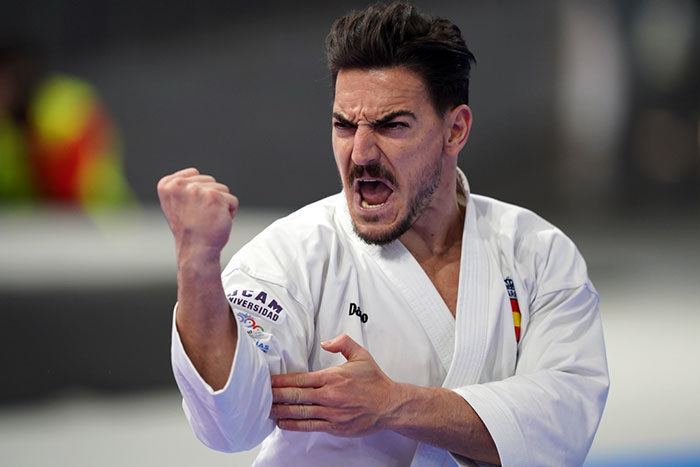 The final of Male Kata will also be a do-over of the final last year in Novi Sad since the other position in the title-deciding bout is taken by Ali Sofuoglu of Turkey. The promising Turkish karateka topped the pool with “Gojushiho Sho” kata and a score of 25.46.

“I am very happy for reaching the final three times in a row. I won two silver medals in the last two championships but I believe it is my time now to win a gold,” said the 23-year-old karateka.

The third golden opportunity for hosts of Spain came in Female Kumite +68kg. Laura Palacio gave the organising country one more reason to celebrate with her qualification to the final. The current EKF bronze medallist defeated Finland’s Titta Keinanen in semi-finals (2-0) to clash for gold against Eleni Chatziliadou of Greece. The defending World champion from Greece aims to get back-to-back world and continental titles after qualifying to the final of the tournament in Guadalajara. The 25-year-old karateka edged Antastasiya Stepashko of Ukraine (2-1) to be in her second continental final. 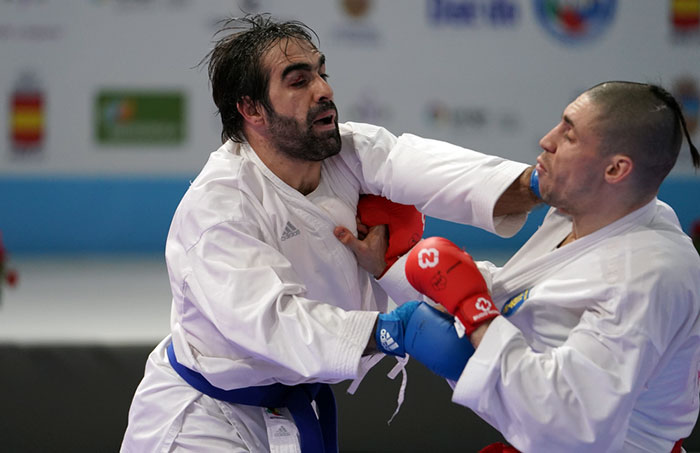 Two of the most-awarded karatekas in Europe will fight for gold in Male Kumite -75kg. Rafael Aghayev of Azerbaijan who has gathered no less than 13 continental gold medals will clash to keep the title he won last year. The five-time World champion from Azerbaijan defeated Stanislav Horuna of Ukraine 5-1 in semi-finals and will meet Luigi Busa of Italy in the title-deciding bout.

Jonathan Horne of Germany continues demonstrating fantastic form, and after being proclaimed Grand Winner and world champion, the German Karate Star extended the winning streak with an impressive performance in Guadalajara. The five-time European champion qualified for a new final after edging Asiman Gurbanli of Azerbaijan in semi-finals by “Hantei” or decision.

“I always like to give my best, and I like to be in the final. The day was a little bit hard for me but I did all that I could, and I am really happy to reach the final again,” said the current World ranking leader in Male Kumite +84kg.

The other final spot in the category went to Slobodan Bitevic of Serbia. The two-time European champion qualified for his fourth final after his titles in 2015 and 2011 and after taking silver in 2008. Bitevic defeated Gogita Arkania of Georgia 1-0 in semi-finals. 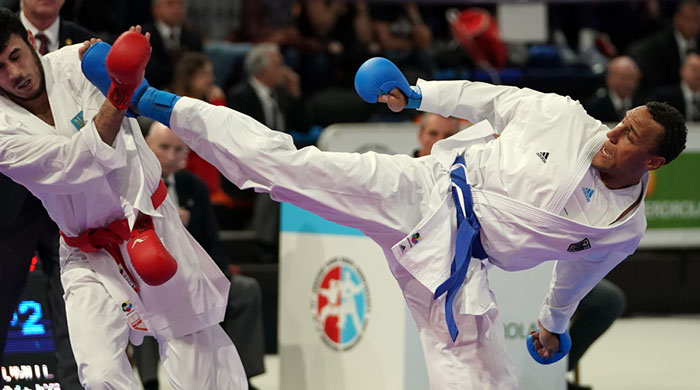 Steven Dacosta showcased a sensational level in Guadalajara. The French star who is the defending World champion aims at recovering the European title which he won for the last time in 2016. Dacosta defeated England’s Jordan Thomas 5-1 in semi-finals.

His rival in the final of Male Kumite -67kg will be Montenegro’s Mario Hodzic. The former underage World and continental title-holder made it to his first continental final in senior competitions after defeating Stefan Josic of Serbia 7-1 in semi-finals.

The other finalist in the category is Russia’s Evgeny Plakhutin. The current bronze medallist defeated Macedonia’s Emil Pavlov to reach his first continental final. 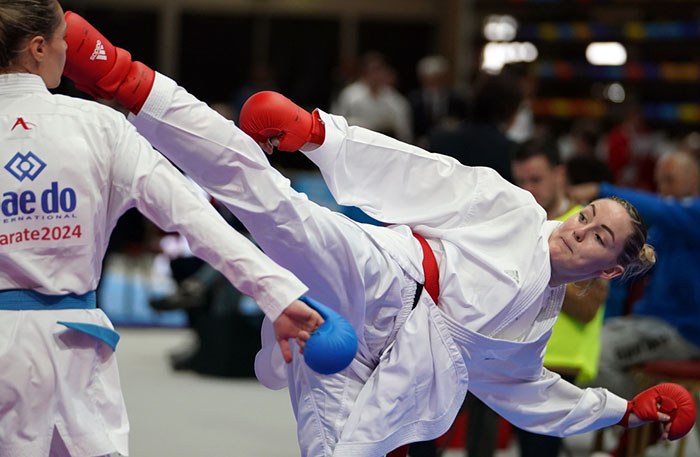 In addition to Jonathan Horne and Sandra Sanchez, two other Grand Winners demonstrated their abilities with their qualification to the finals in Guadalajara. Alizee Agier of France was on top form and made it to the final of Female Kumite -68kg after claiming a convincing 6-0 victory over Italy’s Silvia Semeraro.

The French star who won silver in 2017 will clash for gold against current continental title owner Elena Quirici of Switzerland. The 25-year-old karateka defeated Sherilyn Wold of The Netherlands by “Hantei” or decision in semi-finals.

Also using the Grand Winner status to reach the last stages of the competition, Turkey’s Ugur Aktas qualified for the final of Male Kumite -84kg. The current bronze medallist beat Nikola Malovic of Montenegro 5-3 in a roller-coaster of semi-final.

“Last year I won bronze and the year before I had two gold medals, and here I really want to win gold again. I hope that I will win the title. I will give my best because I want to continue improving to achieve my goal of qualifying for Tokyo 2020,” said Ugur Aktas.

The other spot in the final in this category is taken by Belarus’ Anton Isakau who edged World champion Ivan Kvesic of Croatia 1-0 in semi-finals to reach his first-ever continental final. 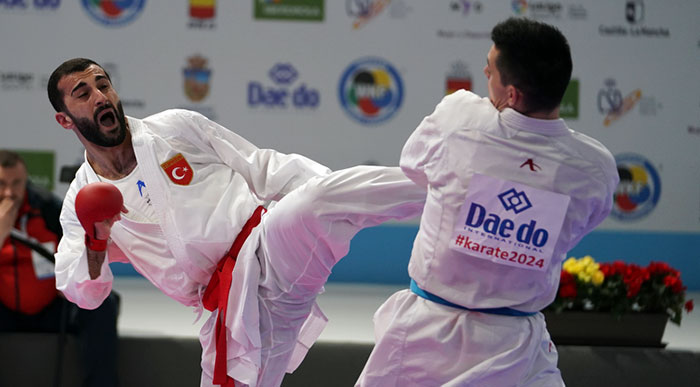 In addition to Ali Sofuoglu’s and Ugur Akta’s qualification to the finals, Turkey wrapped up a successful day with two more spots in the title-deciding bouts. Merve Coban made it to fight for his first continental title after beating Ukraine’s Anita Serogina in the semi-finals of Female Kumite -61kg. Coban will clash for gold against Slovenia’s Tjasa Ristic who produced one of the most outstanding victories in semi-finals following a 9-1 landslide triumph over Slovakia’s Ingrida Suchankova.

Meanwhile, Tuba Yakan took one of the final spots in Female Kumite -55kg. The 2017 continental title-holder convincingly beat Anzhelika Terliuga of Ukraine in semi-final 8-1. Luxemburg’s Jennifer Warling is the other finalist of the category after her 2-1 victory over Scotland’s Amy Connell.

In the last final-deciding bout of the day, Bettina Plank of Austria recovered the winning ways and after taking silver last year, qualified for the final of Female Kumite -50kg following a slim victory over Nurane Aliyeva of Azerbaijan. She will fight for gold against France’s Sophia Bouderbane who produced one of the surprises of the day after eliminating favourite Serap Ozcelik of Turkey in semi-finals (2-0).

Action continues in Guadalajara in day 2 with the team and Para-Karate categories. The opening ceremony will also take place on Friday. The medal bouts of the event will be streamed LIVE on karateworld.tv 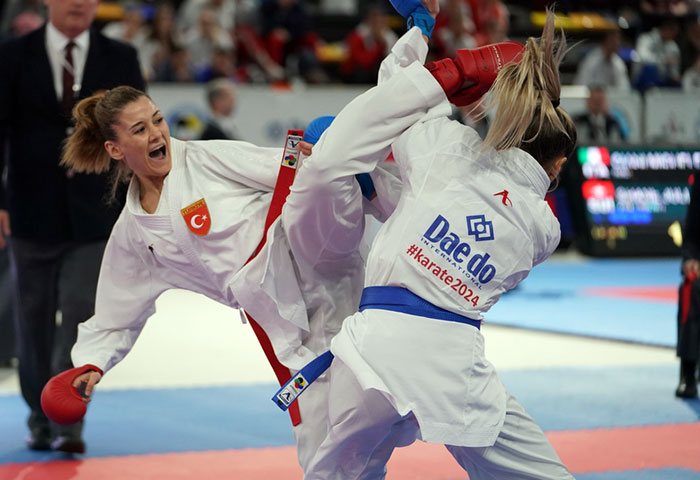