Spain and Japan show Kata domination in day 3 of #KarateMadrid2018 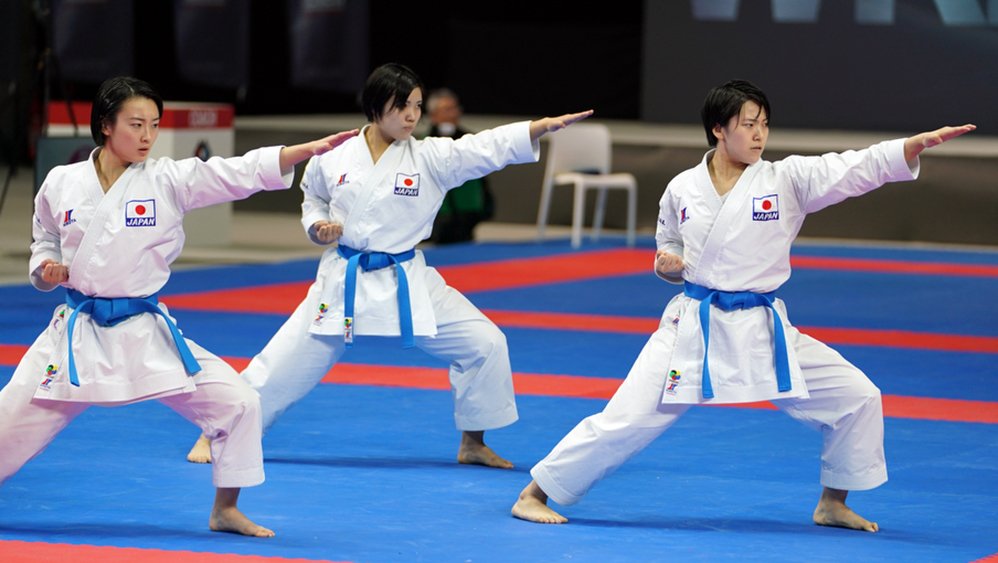 Spain and Japan stated their Kata powerhouse status and completed the total domination of the category after claiming the four spots in the finals of the Team Kata competition. Team Kata and Para-Karate took the spotlight of the third day of action of the 2018 Karate World Championships in Madrid.

Spain and Japan completed the total domination of the Kata category after claiming the four spots in the finals of the Team Kata competition. Team Kata and Para-Karate took the spotlight of the third day of spectacular action of the 2018 Karate World Championships in Madrid.

Following the success of Japanese and Spanish representatives in the Individual Kata competition, with Sandra Sanchez and Damian Quintero, and Kiyou Shimizu and Ryo Kiyuna sharing all the final spots, the Kata team category was also dominated by the two countries. The four Kata finals will be a thrilling confrontation of Japan versus Spain for the supremacy of the category of choreographed movements.

In Male Team Kata, hosts of Spain used the support from the stands to reach the final stage of the competition. The squad formed by José Manuel Carbonell, Sergio Galán and Francisco José Salazar improved the bronze medal that they won in Linz two years ago with the qualification to the gold medal bout. The Spanish side prevailed in the pool phase with two victories by unanimous decision (5-0) and a triumph by split decision (3-2) over Turkey in semi-finals. 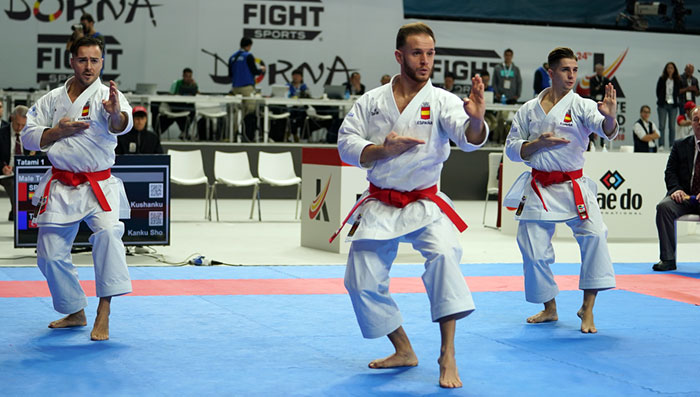 “We have had such an outstanding support today. I have never felt something like this before. Now we just want to give our best in the final,” said Sergio Galan, while team-mate José Manuel Carbonell added: “We do not want to wake up from this dream. With the support that we are receiving, we will try to perform at our best in the final.”

Showcasing outstanding level, the Male Kata Team from Japan demonstrated their prevalence in the category with a clean sheet of victories, three triumphs by unanimous decision 5-0 including the semi-final bout against Italy. The Japanese side, current title-holders, is spearheaded by two-time World champion Ryo Kiyuna and completed by Arata Kinjo and Takuya Uemura.

“It is our second time in the final of the World Championships and we are very proud. The ambiance was different from the events that we are used to attending in Japan. We did our best and enjoyed very much the reactions that we received from fans in the stands,” said Ryo Kiyuna. 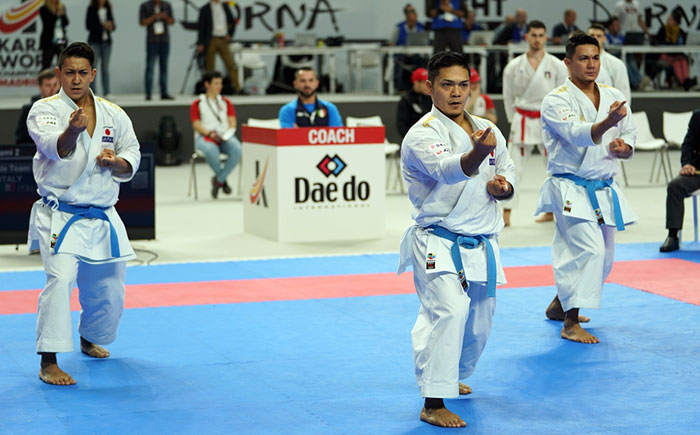 “Japan is the birth-place of Karate and for me, as Japanese and as a Karateka it is great news that the next Olympic Games will be taking place in my country, in Japan. I am very much looking forward to showing my strong Karate there,” added the world title-holder.

The final of the Female Team Kata category will be a repetition of the title-deciding bout two years ago in Linz. The Japanese and Spanish sides will meet again for the world crown in a showdown of Kata excellence.

The current title-holders of Japan demonstrated their domination of the category with a perfect performance over the tatamis of WiZink Center sports hall. The team formed by Saori Ishibashi, Mai Mugiyama and Sae Taira won the first two bouts by unanimous decision and beat Turkey 4-1 in semi-finals to qualify for the final stage of the competition. 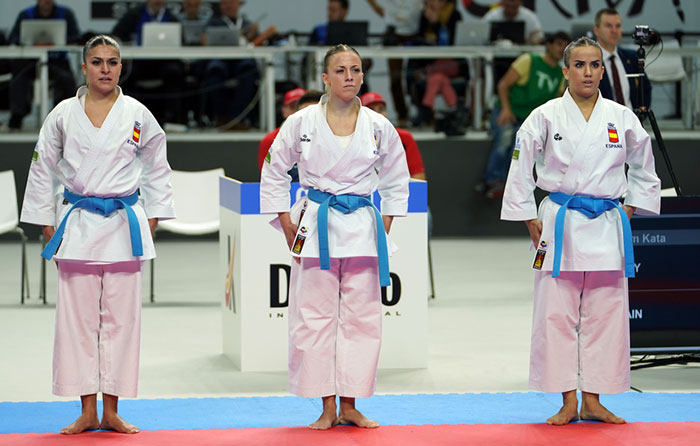 Local Karate fans had even more reasons to celebrate as the Female Kata Team also earned the ticket to the gold-deciding match.  Spain had claimed the silver medal in Linz 2016, and this time at home with a new formation, the squad composed by Marta García Lozano, Lidia Rodríguez Encabo and Raquel Roy took the flag to the host country to the final bout. The young Spaniards won all their bouts by unanimous decision (5-0) including the semi-final against Italy.

“We are euphoric, ecstatic, so, so happy. I don’t know what to say!” stated Marta Garcia Lozano close to tears. “There are no words to describe what we are feeling right now,” added Raquel Roy, while Lidia Rodriguez Encabo said: “We could really feel the support that we have been receiving. We would like to tell all those that helped us much to be here that we will compensate their support by doing our best in the final”.

The third day of the 2018 Karate World Championships will also go down in the history of the sport since the WiZink Center sports hall hosted the new edition of the Para-Karate World Championships. Over a hundred athletes from 33 countries inspired with their performances on the tatamis and demonstrated the impressive power of will and their outstanding abilities. 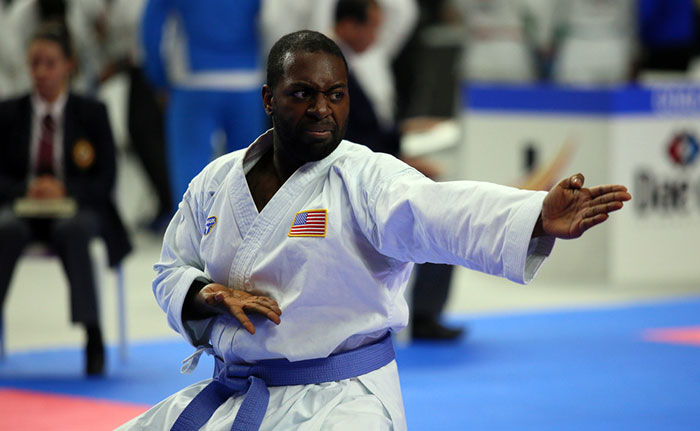 Showing that there are no barriers big enough when it comes to Karate, the three Para-Karate categories met their finalists today. In Visually Impaired, the gold medals will be contested by Brazil’s Deborah Knihs and Germany’s Helga Balkie, and by Azerbaijan’s Sahib Ahadov and Japan’s Yasushi Oba. The finalists of Intellectually Impaired are Patricia Wright of Canada and Salma Alaaeldin Ebrahim of Egypt while the Wheelchair category will have Egypt’s Abdelaziz Abouelnaga and Mohamed Allakany, and Isabel Fernandez Jimenez of Spain and Marina Kulikova of Russia as finalists.