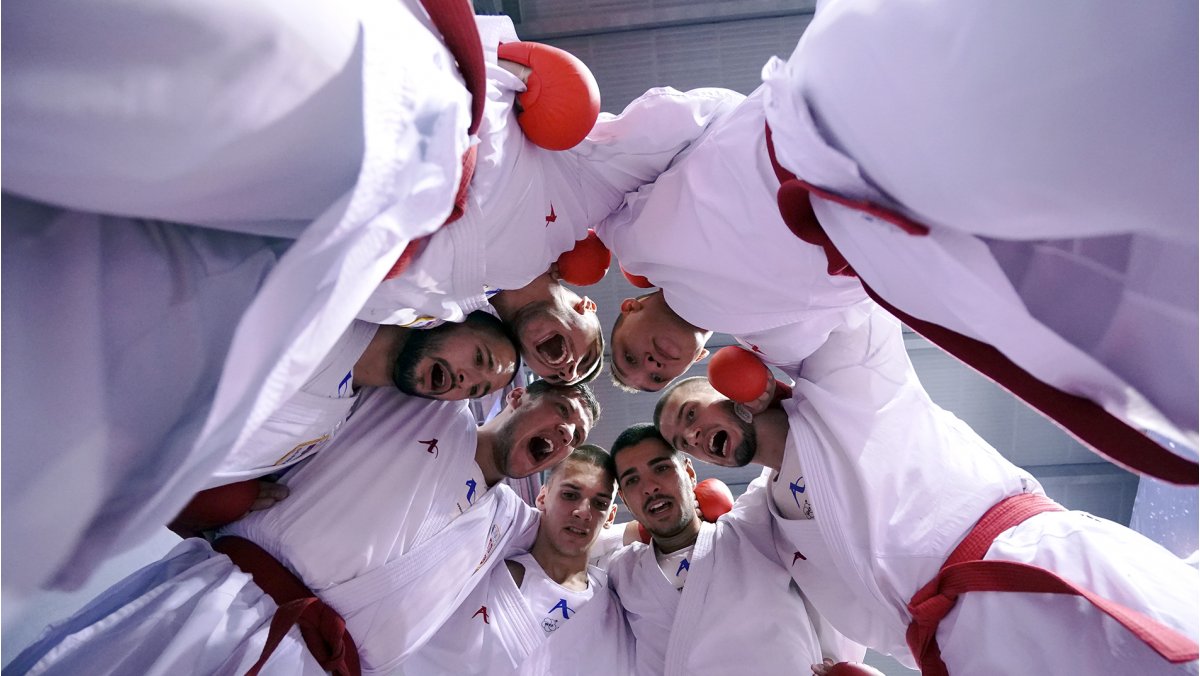 The countries of Japan and Spain in Team Kata, and Serbia, Italy, Egypt, and France in Team Kumite dominated the competition by squads on Day 4 of the 2021 Karate World Senior Championships.

Perpetuating the impressive domination of the category in the last editions of the event, the sides of Spain and Japan will compete for the gold medal in both Male and Female Team Kata.

The two leading Kata nations will clash for the title in Male Team Kata, just as they did in the 2018 World Championships. The Japanese side acts as current titleholders, and they controlled the competition in the preliminary rounds today, with a score of 26.46 points with “Sochin” kata in the final pool.

In a repetition of the last edition of the tournament, Spain also made it to the title-deciding bout in dominating fashion. The renovated Spanish squad topped the final pool with a score of 25.92 with “Chatanyara Kushanku” kata. 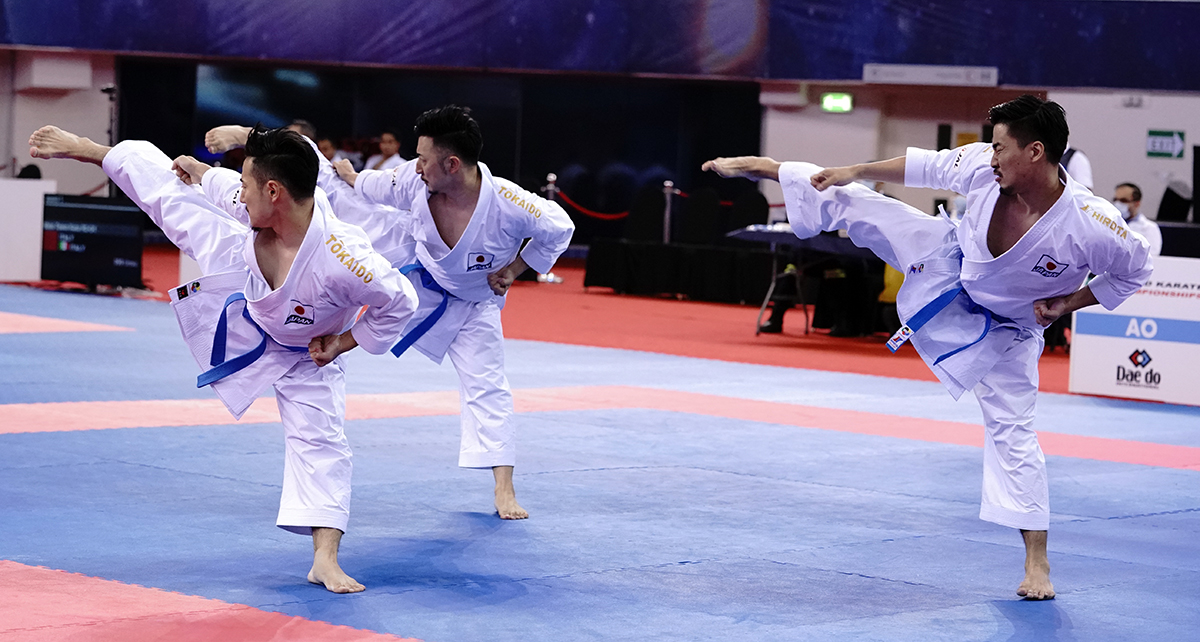 Japan aim at winning their third consecutive World title, while Spain hope to re-take the world crown that they won in 2014.

The Female Team Kata category will also have Spain facing Japan. Defending champions of Japan hope to win their third consecutive crown as they showcased an impressive level. The Japanese Kata squad topped the pool with 26.28 with “Gojushiho Sho” kata.

After losing the final three years ago, the Spaniards expect to avenge their defeat at home in Madrid 2018. The current silver medallists who have finished in the second position in the two last World Championships prevailed in the final pool with a score of 26.26 with “Anan Dai” kata.

The thrill and electric showcase of the best Karate took over the Team Kumite competition. 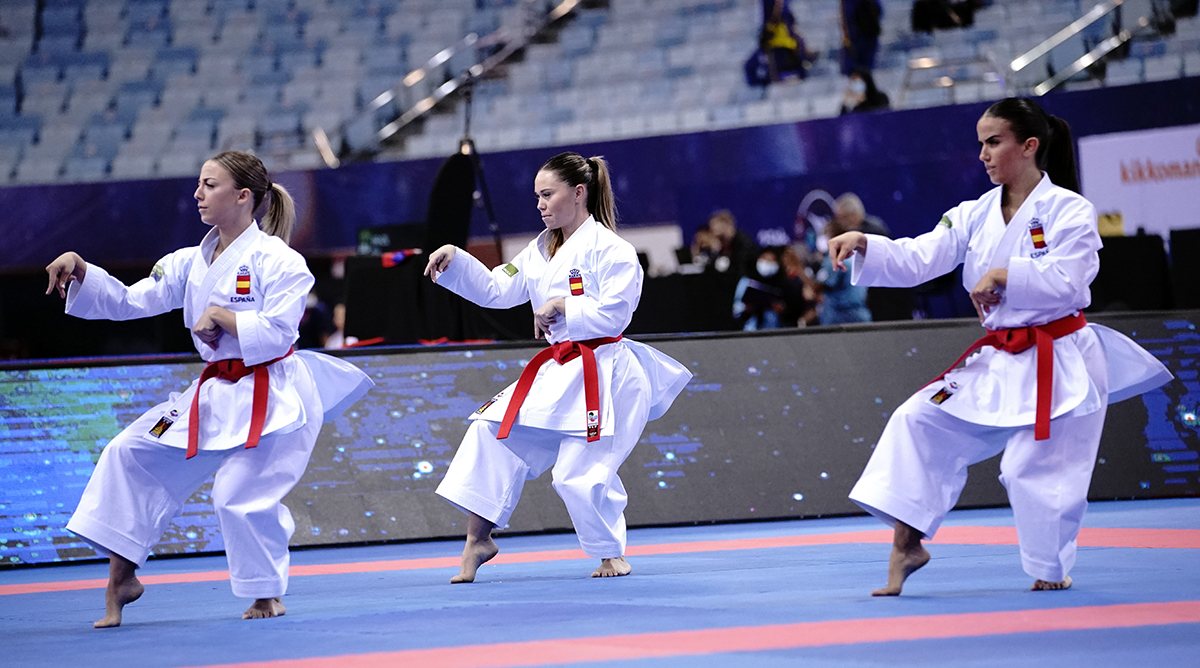 In Male Team Kumite, with defending champions of Iran absent from the event, the title will go to either Serbia or Italy.

The Serbian side will try to recover the title that they won for the last time at home in Belgrade 2010. The European nation claimed a hard-fought victory over Uzbekistan in the tie-breaking match (3-2) of the semi-finals.

Meanwhile, Italy go back to the final of the Male Team Kumite competition for the first time since their silver at 1982 Taipei, thus putting an end to a 39-year drought of top awards at Karate’s biggest event. The Italian side edged Turkey 2-2 in a gripping semi-final round.

Using the contribution of Olympic gold medallist Feryal Abdelaziz as their biggest asset, Egypt qualified for the final of Female Team Kumite for the first time since their victory in 2014 Bremen.

Bronze medallists in the last two editions of the World Championships, the Egyptian side edged Japan in the semi-finals by the highest score as the three bouts ended with 1-1 and a tie.

On the other side of the tatami awaits the French team. The defending title-holders continue demonstrating a fantastic level in team categories as they have reached the final of the female division consecutively in all the World Championships since 2010. Winners of the 2000, 2010, 2012, 2016, and 2018 editions, the French squad defeated Montenegro in the semi-finals 2-0.

The event reaches its final stage as the medals of the individual categories will be decided on Saturday.