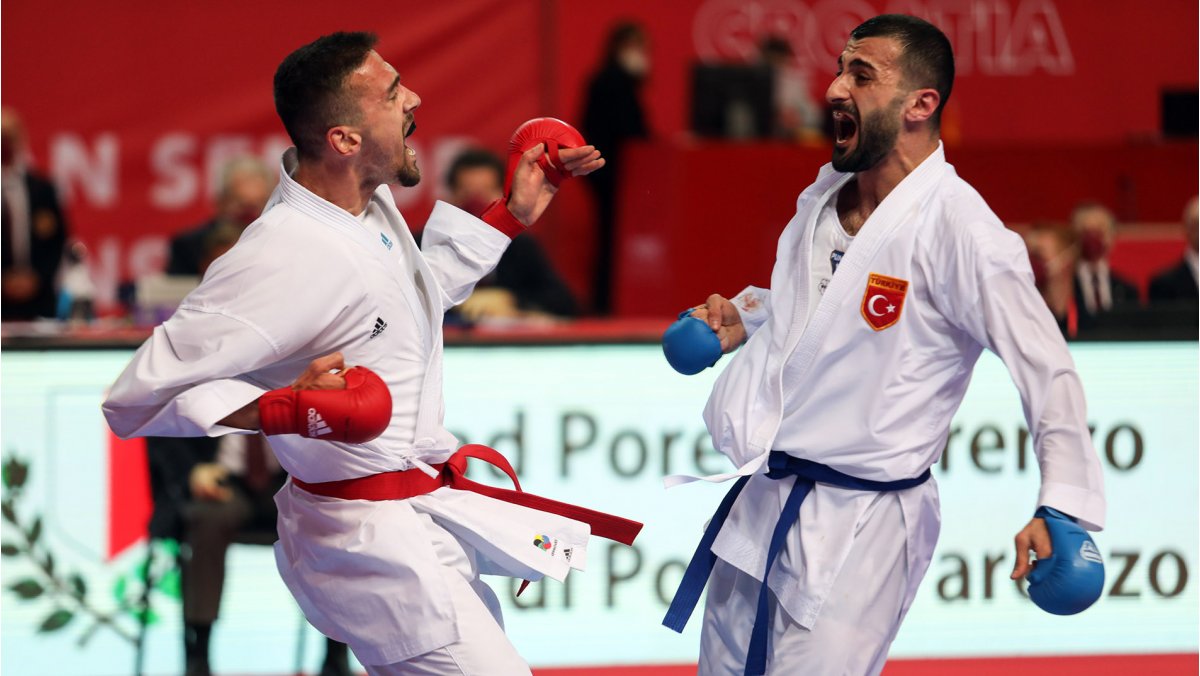 Ugur Aktas of Turkey and Jonathan Horne of Germany were among the big winners of the first day of the EKF Senior Karate Championships.

Ugur Aktas of Turkey and Jonathan Horne of Germany were among the big winners of the first day of the EKF Senior Karate Championships. With the Olympic qualification at stake, the opening day of the tournament was full of excitement.

After winning back-to-back titles at the main World and continental stages, Jonathan Horne of Germany showcased outstanding form to make it to her seventh continental final. The current World title-holder edged Georgios Tzanos of Greece by “Hantei” or decision 1-1 and confirmed his qualification to the Olympic Games by standings.

His rival in the final will be Slobodan Bitevic of Serbia, who is the current European Championships silver medallist, thus producing a repetition of the final two years ago. Bitevic surprised front-runners in the Olympic quest and defeated Asiman Gurbanli of Azerbaijan by 2-0. 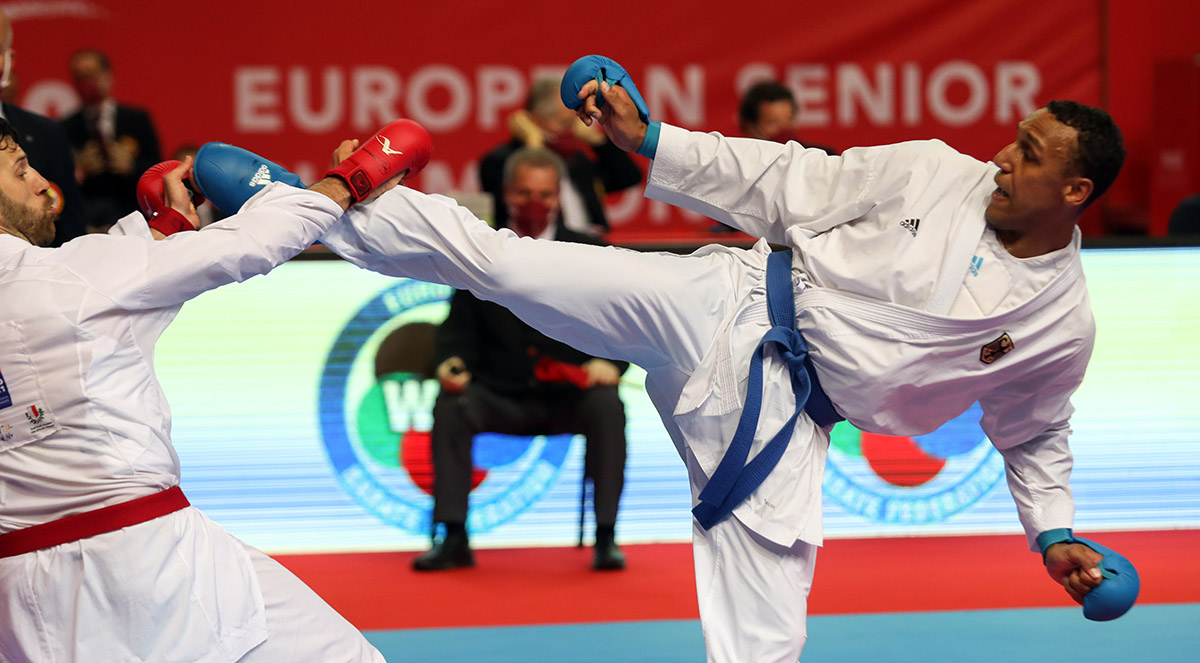 “I am very happy to fight against Slobodan, he is one of my best friends in Karate. After my results here I can say that I am in the Olympics, so all the pressure is now falling. Now, I just want to win the gold medal,” said Horne.

The final of Female Kumite -68kg will see a clash between two of the biggest fan favourite athletes of the category.

Vicky Panetsidou of Greece returns to a final of the European Championships eleven years after her last title. In a true tour de force, the member of the WKF Athletes Commission edged Eda Eltemur of Turkey by “Senshuu” or fist unopposed point (2-2). 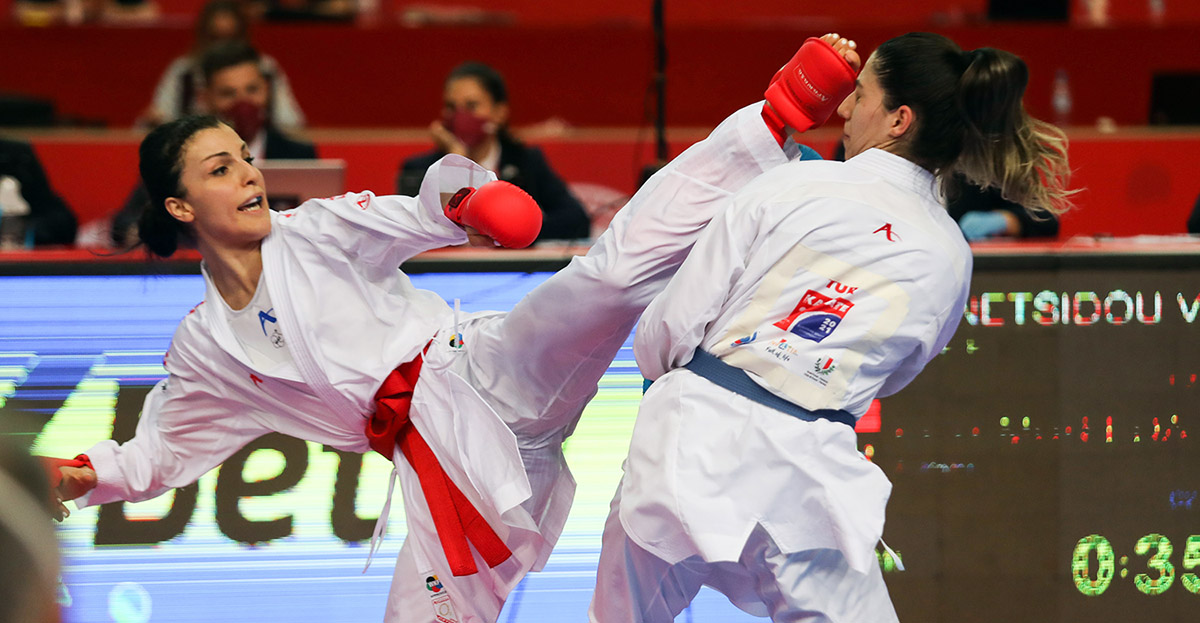 Her rival in the final is World champion Irina Zaretska of Azerbaijan who aims to claim both current World and European crowns after missing the finals two years ago in Guadalajara. The leader of the Olympic standings defeated Katrine Pedersen of Denmark 3-0.

"My first European Championships medal was here in Croatia in 2005, at the event in Zagreb. Now, 16 year later, I will fight for another medal in Croatia. In 2005 I won bronze and now the medal will shine brighter!" said Panetsidou.

Turkey’s Ugur Aktas became one of the big winners of the day after reaching the final of Male Kumite -845kg and securing his ticket to the Olympic Games by standings. The current Grand Winner of the category achieved a hard-fought victory in semi-finals over local hero and current World champion Ivan Kvesic of Croatia 3-2.

The other spot in the final is taken by Paneh Abdullayev of Azerbaijan who surprised favourites and edged Michele Martina of Italy by “Hantei” or decision (1-1) to achieve his first continental medal bout.

TURKEY VS SPAIN IN KATA

Spain’s Sandra Sanchez aims at extending her forceful supremacy of Female Kata. The defending World and European title-holder made it to her sixth consecutive final after topping her pool with a score of 26.6 points with “Papuren” kata.

Just as it happened at the opening event of the season in Istanbul, Sanchez will clash for gold against Turkey’s Dilara Bozan. The promising Turkish athlete who nearly qualified to the Olympics by standings dominated her pool with a score of 25.2 points and “Anan Dai” kata.

“As it has been two years since our last European Championships and since we did not compete in the Karate 1-Premier League Lisbon, I was even more thrilled to participate in this tournament. I was anxious and I wanted to do my best here but once I stepped on the tatami, I managed to let all the tension go and I just went with the flow,” said Sanchez who is the leader of the Olympic standings in the category. 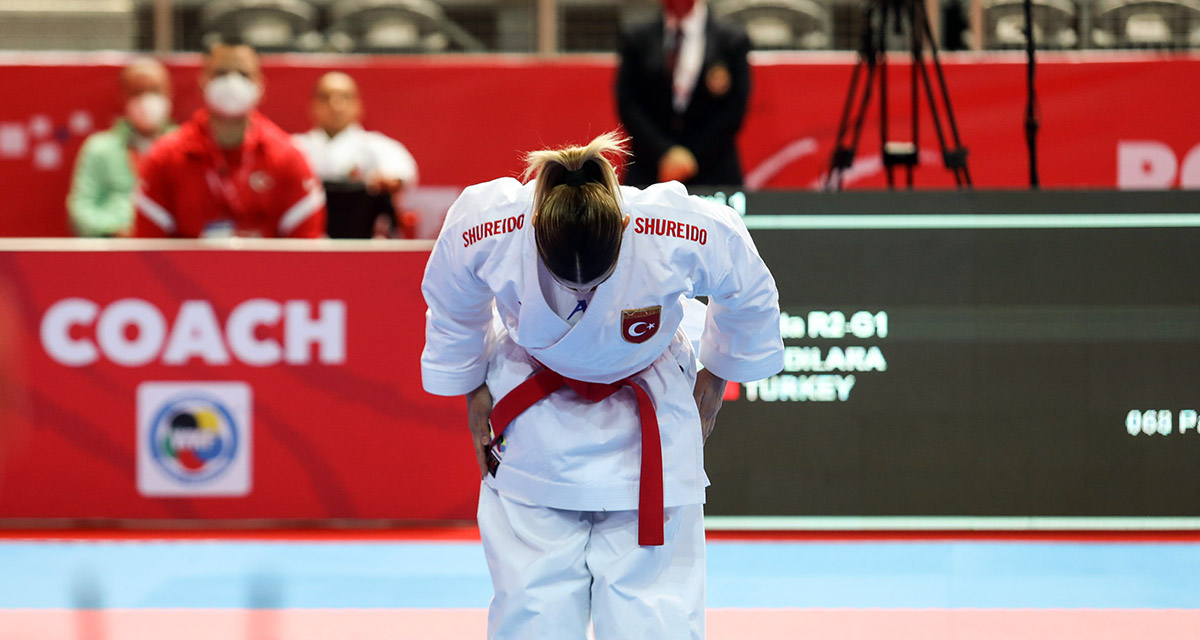 “The European Championships are always special for me. My last final was six years ago in Istanbul and I won the silver medal there. This time, I will do everything in my power to win the gold medal. My other big goal is to qualify for the Olympics at the Qualification tournament in Paris,” said Bozan.

Meanwhile, in Male Kata current title-holder Damian Quintero of Spain reached his tenth continental final following a demonstration on the tatami and a final score of 26.06 points with “Suparinpei” kata.

The final bout will be a repetition of the gold medal bout at the 2019 European Championships as the other side of the tatami will be taken by current silver medallist Ali Sofuoglu of Turkey. The Turkish karateka who is currently qualified for the Olympics topped the podium with a score of 26.26 points with “Kanku Sho” kata. 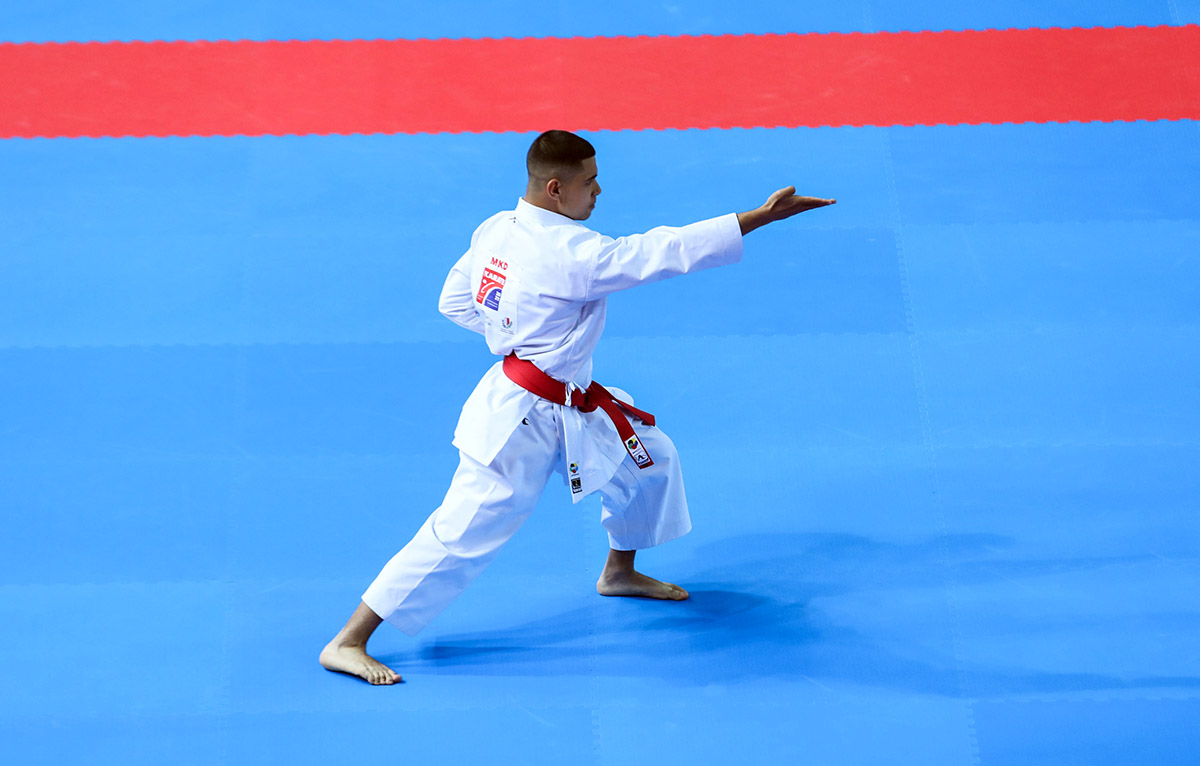 “I had a great feeling competing today even though it has been nearly two months since our last tournament. But now we are at the European Championships, I am fighting for a new continental title, and I believe that I have been growing in my performance from kata to kata. I am very pleased to be in the final again,” said World ranking leader and qualified for Tokyo 2020 Damian Quintero.

“I am happy to be in my fourth final in a row. After the hard work, training and so many flights, it is good to get good results. I believe that I can win the final this time,” adds Sofuoglu of Turkey.

Meltem Hocaoglu Akyol of Turkey demonstrated top form and reached her third final in three events this year. After winning silver in Istanbul and gold in Lisbon, the athlete who currently takes the fifth position in the Olympic standings took a step forward in her intention to qualify for the Games. The current European Championships bronze medallist defeated Clio Ferracuti of Italy in the semi-finals by 4-3.

Meanwhile, Aleksandra Stubleva of Bulgaria surprised favourites to make it to the final of Female Kumite +68kg. Stubleva upset Fortesa Orana of Kosovo in the semi-finals 4-0 to qualify for her first-ever continental final. 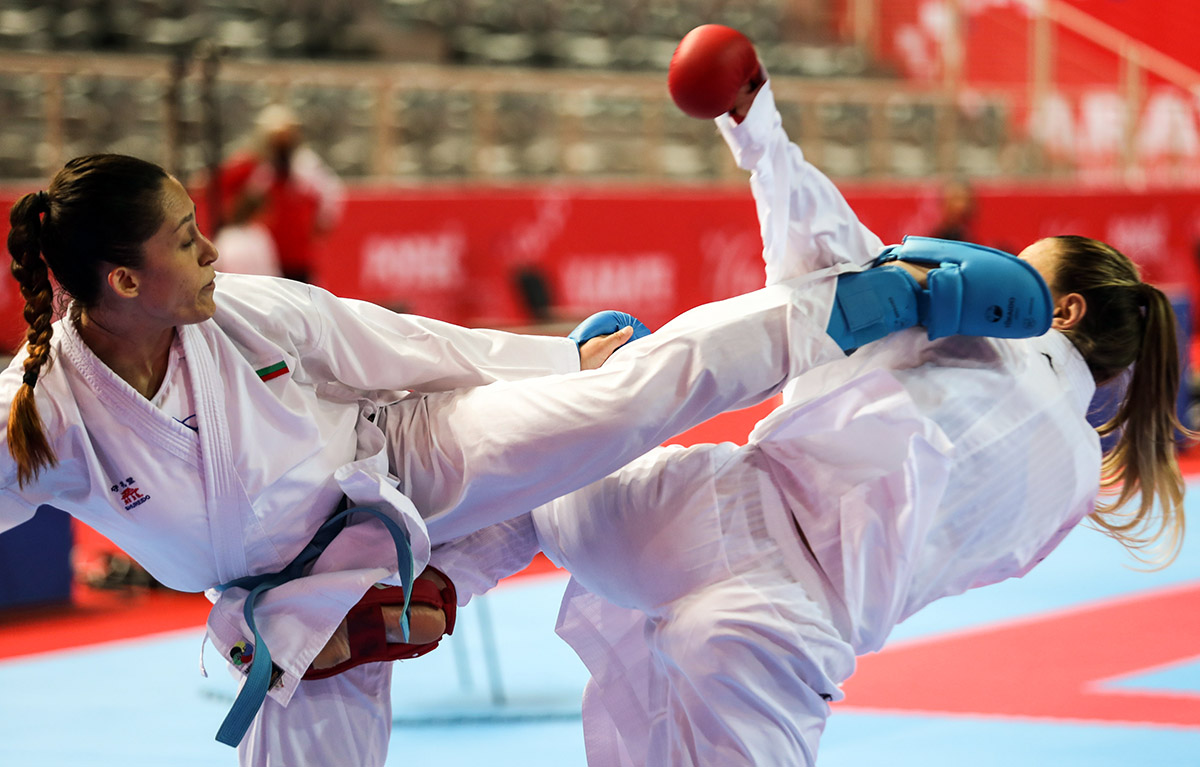 After winning gold in the two events this season, Jovana Prekovic of Serbia showcased sensational form with a third consecutive qualification to the final. Prekovic who is in qualifying position to the Olympics by standings made it to the final after producing a hard-fought triumph over Ingrida Suchankova of Slovakia 4-5. 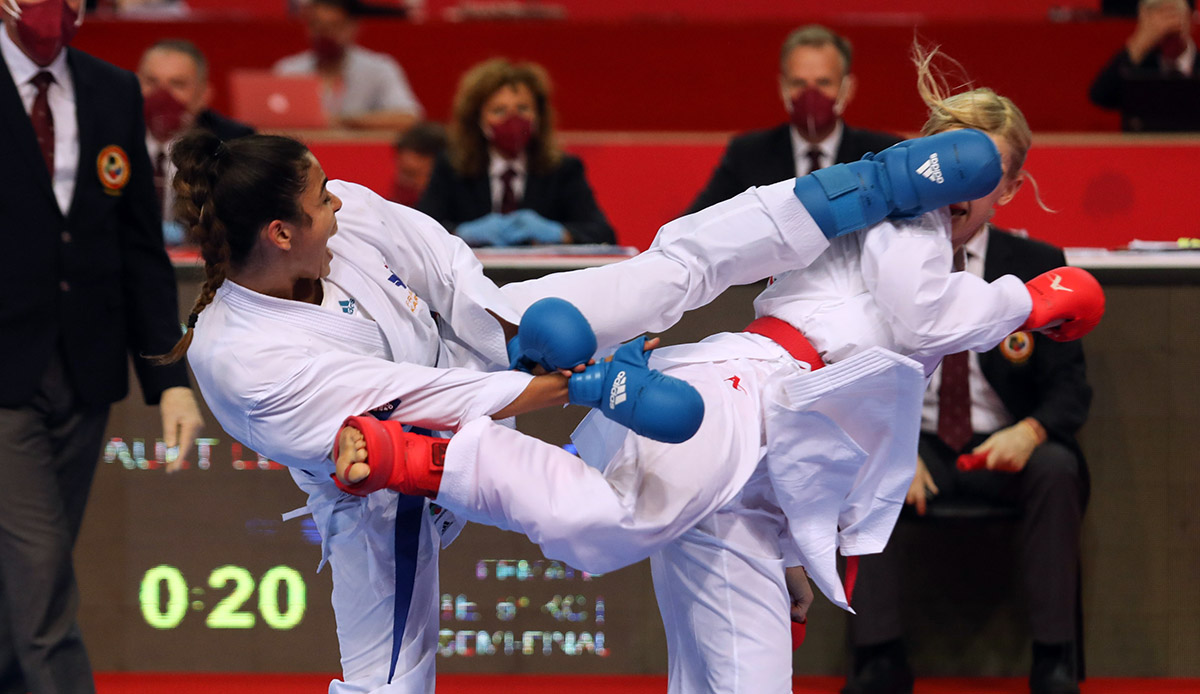 Two of the biggest legends of Karate will clash for gold in the final of Male Kumite -75kg. Karate heroes Stanislav Horuna of Ukraine and Rafael Aghayev of Azerbaijan will meet for the European crown in a repetition of the title-deciding clash of the 2019 European Games.

Meanwhile, Olympic standings third-placed and with a ticket to the Games Rafael Aghayev defeated Noah Bitsch of Germany in one of the most thrilling bouts of the day. Eleven-time European champion Aghayev clinched a “Waza-ari” or two-point kick with seconds to go to win the bout by a slim 2-0.

“I am curious about how the final will go. I still have many fights ahead of me since I also compete in Team Kumite, so I fought today, I will fight tomorrow and the day after tomorrow and on Saturday. But I am motivated, I have a lot of energy, and I am looking for the title,” said Horuna.

“Karate is my life. Some people out there may say that I am too old but the important thing is what I have in my mind. My will is my way and I can accomplish everything I want,” said Aghayev. 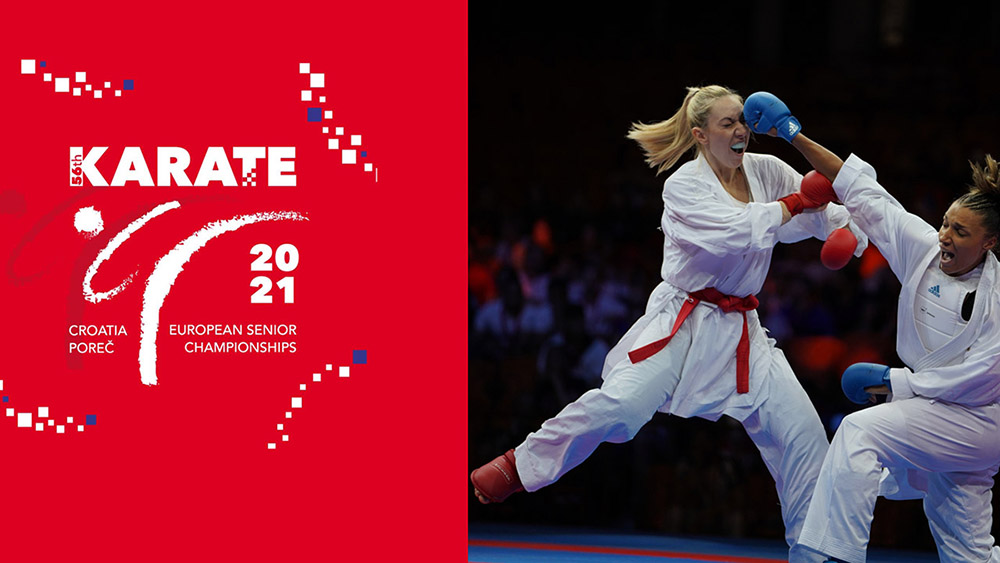