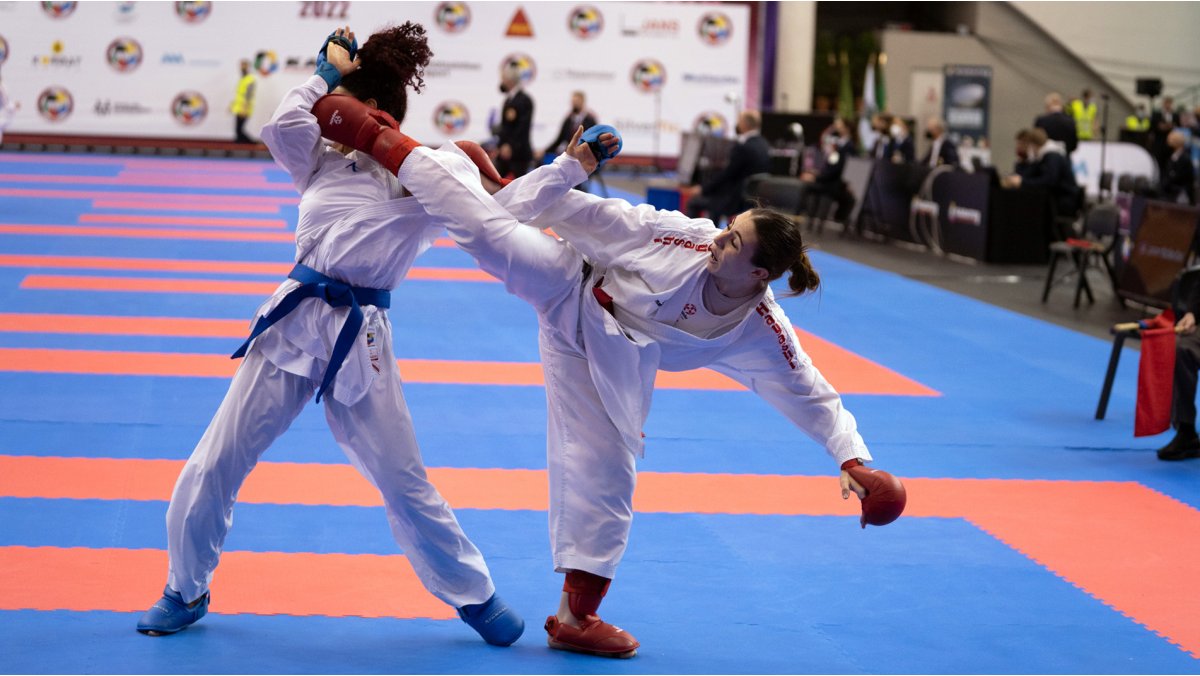 The qualification to the final of stars such as Irina Zaretska, Anita Serogina and Meltem Hocaoglu Akyol and the success of promising karatekas marked the second day of the competition of the Karate 1-Premier League Matosinhos.

World champion Irina Zaretska of Azerbaijan became the star of the day as she qualified for the final of Female Kumite -68kg. The World ranking leader from Azerbaijan has Ukrainian background; after reaching the title-deciding bout following a victory by “Hantei” or decision over Halyna Melnyk of Ukraine, she announced that she will donate the prize money to her country of origin.

The final of the category will be a clash of titans since Olympian Silvia Semeraro of Italy will be her rival in the bout. Semeraro edged Elena Quirici of Switzerland 1-0 in the semi-finals. 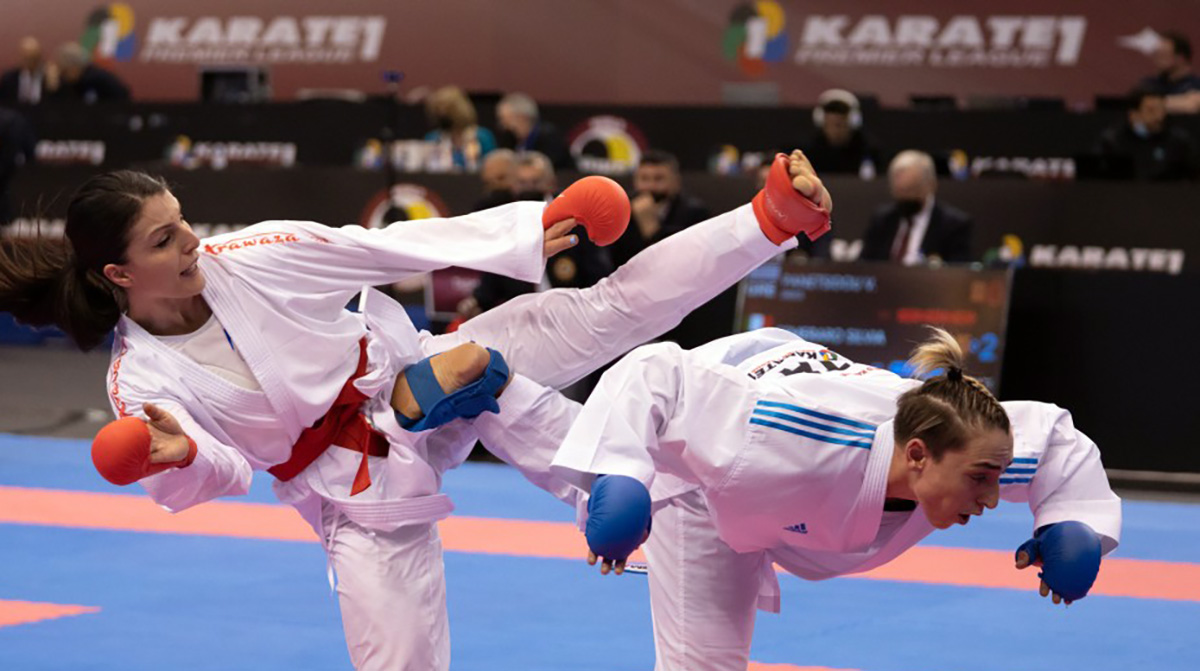 In a demonstration of overcoming adversities, Ukraine’s Anita Serogina took the flag of her country to the final of Female Kumite -61kg. The Olympian gave Ukrainian karate reasons to celebrate as she made it to her second consecutive final of the season after edging Alexandra Grande of Peru 1-0.

Her rival in the final is Assel Kanay of Kazakhstan who defeated Diana Shoshtak of Ukraine 5-4 and prevented an all-Ukrainian final in the event.

“Today, I wanted to fight for myself and for my country. Karate gives me the opportunity to concentrate on something different for a short while because the rest of the time my mind is focused on the situation in my country. Tomorrow I am in the final and I want to win gold for my country.”

In her first tournament as Grand Winner, Meltem Hocaoglu Akyol of Turkey showed excellent form to qualify for the final of Female Kumite +68kg. The current Grand Winner of the category beat Japan’s Ayaka Saito 3-0 in the semi-finals.

The other spot in the final is for up-and-coming karateka Lucija Lesjak of Croatia. The World Championships bronze medallist claimed a convincing 6-1 victory over Ingrid Creemers of the Netherlands. 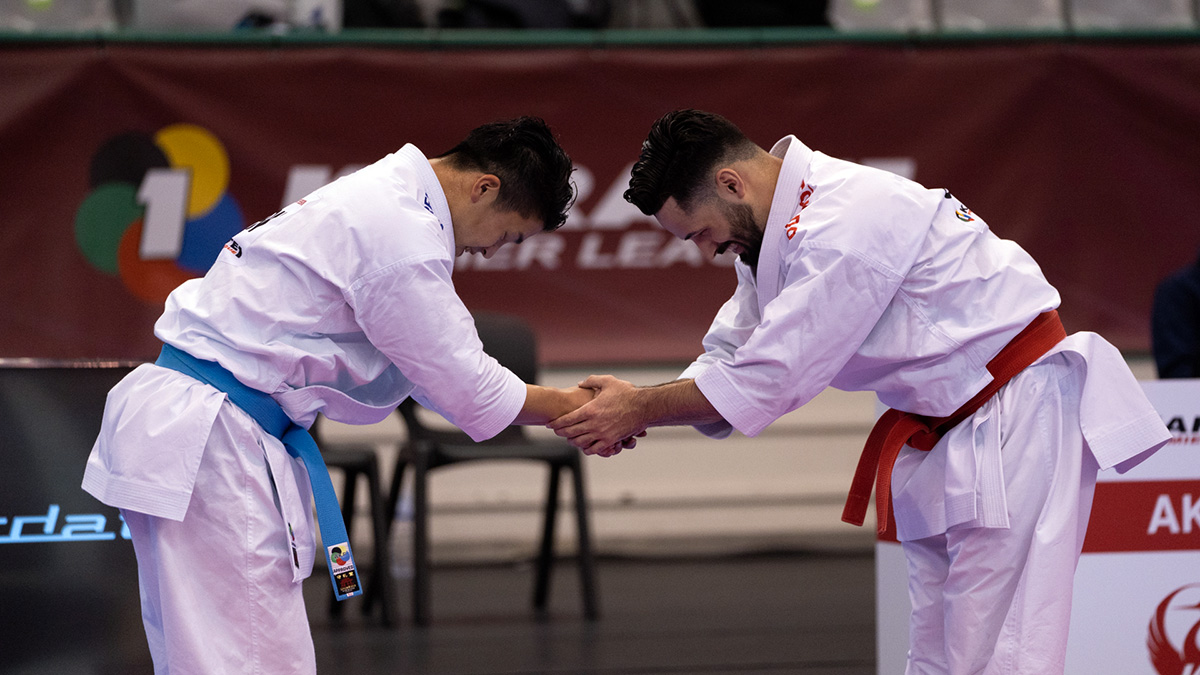 The category of Male Kata had promising karatekas producing the big upset of the tournament. European champion Ali Sofuoglu of Turkey qualified for his first final this season after beating teammate Enes Ozdemir by 26.94 to 25.72.

Meanwhile, Kakeru Nishiyama of Japan made it to his second Karate 1-Premier League final after upsetting Olympian Ariel Torres of the US (26.76 to 25.44).

The final of Male Kumite -84kg also celebrates the growing pre-eminence of the younger karatekas. Brian Timmermans of the Netherlands qualified for his first-ever final of Karate 1-Premier League after edging Italy’s Andrea Minardi.

Also showcasing the strength of new generations, the final of Male Kumite +84kg will see Rob Timmermans of Curacao clashing against Babacar Seck Sakho of Spain.

The current continental silver medallist from Curacao defeated Luca Costa of Belgium in the semi-finals 5-1. Meanwhile, the bronze medallist at #Karate1Fujairah from Spain edged Andjelo Kvesic of Croatia 1-0.

CLICK HERE to go to all the info on the Karate 1-Premier League Matosinhos.