New names in quest to gold at The World Games 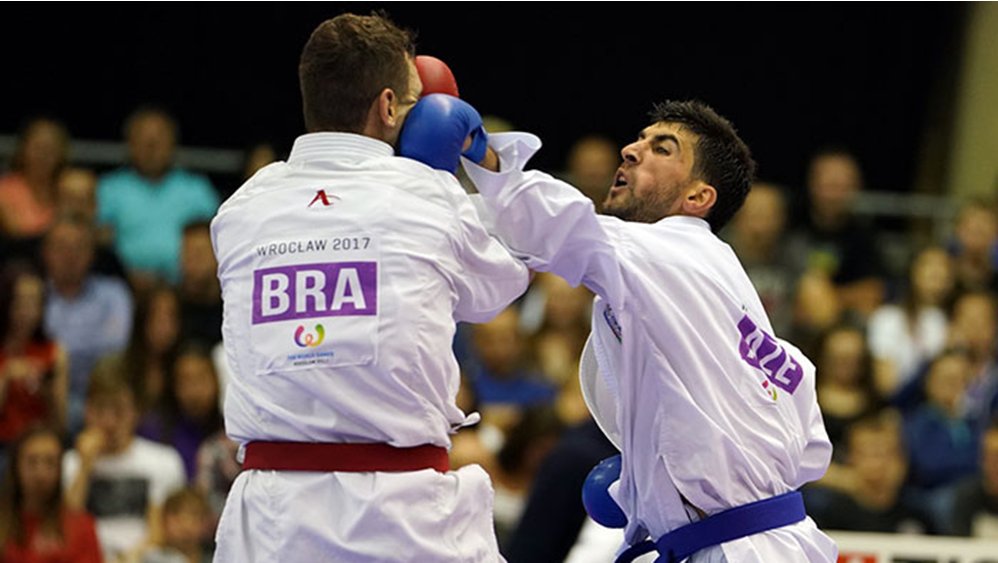 Upcoming karatekas surprised in the morning session of the second day of Karate action at The World Games and qualified for the semifinals of the thrilling competition. Favourites also showed power and will clash for the medals at the historic event.

Upcoming karatekas surprised in the morning session of the second day of Karate action at The World Games and qualified for the semifinals of the thrilling competition. Favourites also showed power and will clash for the medals at the historic event.

The final clash of the last World Championships in Female Kumite -68kg category will be repeated today in Wroclaw since the two finalists of the tournament will meet in the semifinals of The World Games. Title-holder Alisa Buchinger of Austria and runner-up Katrine Pedersen of Denmark will clash for a spot in the final in one of the highlights of the competition.

In the other semifinal of the category, Japan?s Kayo Someya extended the excellent performance of representatives of the birth nation of the sport and will fight for the final against one of the surprising athletes of the day, Lamya Matoub of Algeria who upset favorites in the quest for medals.

Karate fans of the host ry celebrated the qualification for semifinals of Justyna Gradowska, Michal Babos and Kamil Warda in a successful session for the organising nation. Twenty-seven-year-old Gradowska presented an efficient performance in the pool phase of Female Kumite -61kg and will try to become the first Polish karateka of the host ry to reach the final in the competition.

Her rival in semifinals will be Anita Serogina of Ukraine who stated her favourite status after defeating Australia?s Kristina Mah and getting a tie against Peru?s Alexandra Grande.

The Peruvian karateka also earned the spot in semifinals and will clash for the title-deciding bout against Slovakia?s Ingrida Suchankova. The world ranking leader from Slovakia was defeated by local karateka Justyna Gradowska but beat World Championships runner-up Lucie Ignace of France to be in the semifinal.

Meanwhile, Kamil Warda presented an impressive performance in the pool phase of Male Kumite -84kg, and after beating favourite Aykan Mamayev of Azerbaijan, getting a tie against Jorge Perez of Dominican Republic and losing against Ryutaro Araga of Japan, the Polish karateka took a spot in the semifinals.

The other semifinal in Male Kumite -84kg will be one of the highlights of the afternoon session, as World champion and world ranking leader Ryutaro Araga will clash against European champion Ugur Aktas of Turkey in a bout featuring two of the top competitors in the category.

Also showing a great level in the pool round, Poland?s Michal Babos made it to semifinals of Male Kumite +84kg. The local karateka beat Kenny Guillem of France New Caledonia, lost against Croatia?s Andjelo Kvesic and edged top favourite Achraf Ouchen of Morocco to earn the spot in the semifinals.

Babos will clash in semifinals against Japan?s Hideyoshi Kagawa who continued the fruitful performance of the Japanese delegation at the event.

In the other semifinal, a repetition of the final match of the last World Championships will decide the finalist in Worclaw. Defending world champion Sajad Ganjzadeh of Iran and silver medallist Achraf Ouchen of Morocco will clash in an anticipated bout.

Stanislav Horuna of Ukraine dazzled in the morning session after sailing to the semifinal with a dominating performance. After claiming three convincing victories by 6-1, 6-0 and 4-0 over Thomas Scott of USA, Maciej Jan Boguszewski of Poland and Kazakhstan?s Yermek Ainazarov, the European Championships silver medallist demonstrated his top level at the event.

His rival in semifinals will be Hernani Verissimo of Brazil who got two wins and one defeat to fight for the medals.

Their two rivals will be Isabela Rodrigues of Brazil and Iran?s Hamideh Abbasali who topped the other pool.

Action will continue in the afternoon session with the title-deciding bouts of the thrilling second day of competition.