New Karate World champions crowned as history is made in Madrid 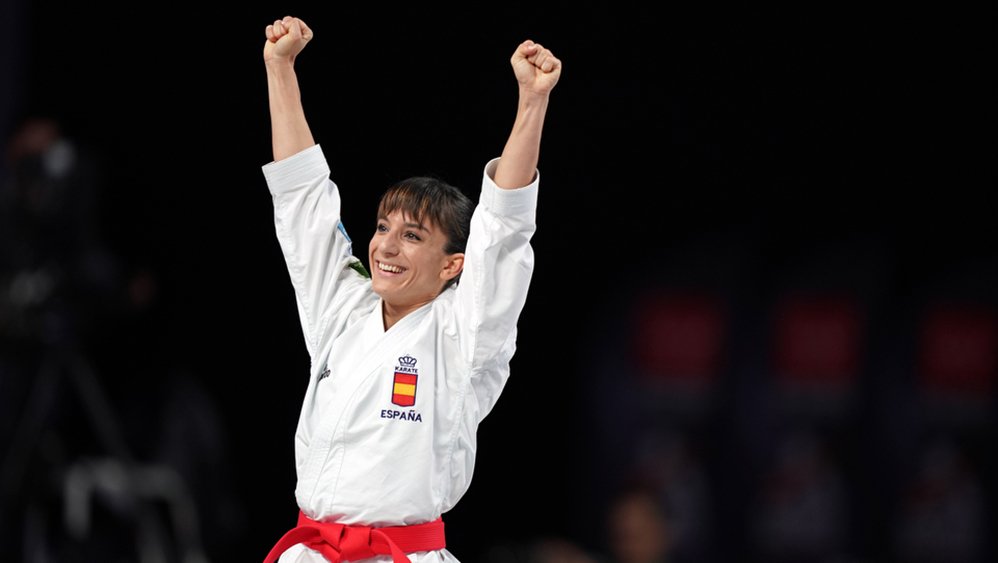 The sport of Karate had a historic day today as the new world champions of the discipline were crowned in front of a full arena in Madrid. The new kings and queens of the modality were proclaimed in the fifth day of action of the 2018 Karate World Championships being held at WiZink Center sports hall in the capital of Spain. Local Kata queen Sandra Sanchez and up-coming karatekas took the spotlight of the memorable day.

The sport of Karate had a historic day today as the new world champions of the discipline were crowned in front of a full arena in Madrid. The new kings and queens of the modality were proclaimed in the fifth day of action of the 2018 Karate World Championships being held at WiZink Center sports hall in the capital of Spain. Local Kata queen Sandra Sanchez, representatives of France and Japan, and up-coming karatekas took the spotlight of the memorable day.

The WiZink Center sports hall turned into a local celebration when one of the biggest stars of the host country, Sandra Sanchez made the dreams of Spanish Karate come true. The 37-year-old karateka faced two-time world champion and dominating force of Female Kata Kiyou Shimizu of Japan, a karateka that had always defeated the Spanish representative. Both athletes, who are close friends out of the tatami, performed excellent “Chantanyara Kushanku” kata, but the support from the packed stands drove Sanchez to victory. The World ranking leader from Spain took the final bout 3-2 and ended Shimizu's four-year leadership in World Championships.

“I just can’t believe it. I am still shaking from so many emotions. My coach Jesús (del Moral) told me earlier that I should try to use all the energy that I was receiving from the stands; I tried to put all the support on my performance on the tatami. I also want to point out that I am extremely grateful that the audience also supported Kiyou Shimizu in her kata.  I wanted both of us to make our best kata and if the judges decided to give me the victory, then it would be because I deserved it. Today, when the flags went up, I could not believe that I had three for me, and she had two,” stated Sandra Sanchez. 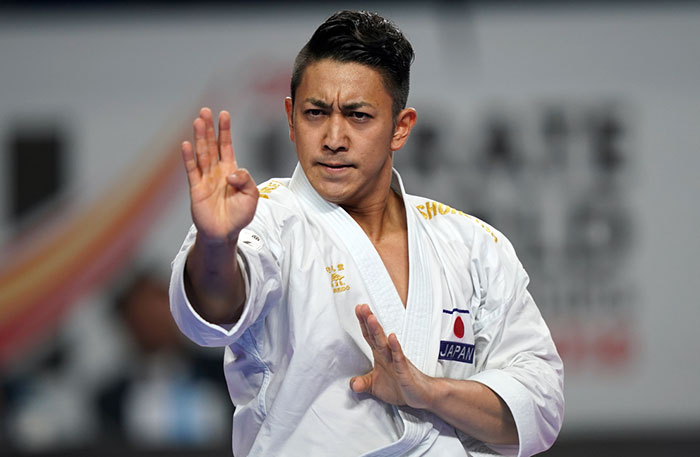 Japan managed to bounce back from the disappointment of Shimizu’s defeat and re-took the title in Male Kata. The Japanese Kata king claimed his third consecutive world crown, thus stating his domination in the category. The 29-year-old karateka defeated Spain’s Damian Quintero in a repetition of the final two years ago in Linz. This time, Kiyuna beat the local representative by unanimous decision (5-0) and prevented the second title for hosts in the category.

“I am very happy for this victory. The crowd was very impressive today; I have competed with Damian many times over, so I knew that I had to give my best in order to get the title. I have worked very hard to be here, and I am very pleased to have won because this tournament is crucial for the Olympic qualification,” said Ryo Kiyuna. 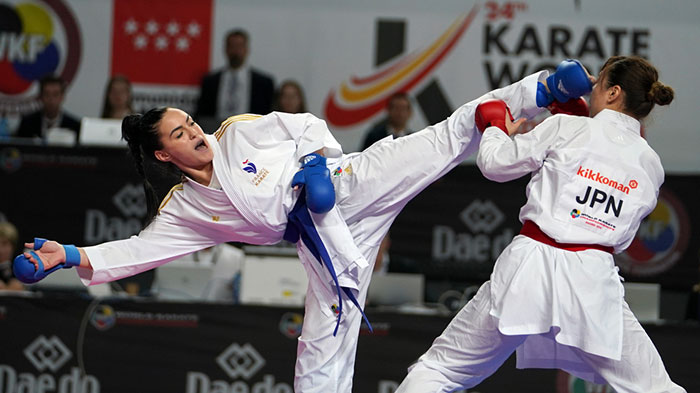 The French delegation had plenty of reasons to celebrate since the powerhouse nation of the sport took two gold medals today. Steven Dacosta presented the most outstanding performance today in a memorable final to win the crown in Male Kumite -67kg. His rival, Vinicius Figuera of Brazil showcased great level and took no less than five points. But Steven Dacosta was in stellar mode and outscored his opponent with an “Ippon” masterclass. The 21-year-old karateka won the bout 6-5 and won the first gold medal of the day for France.

“It was a magnificent moment for me. I have prepared a lot for this, not only physically but mentally. In the final, I did not stop to think too much. I just tried to do what I do, and it worked out great for me,” said Steven Dacosta.

“Each title is different but the most important thing is that I could win it here with my team-mates. It is a very special tournament, “ said Leila Heurtault.

“It has been a team effort. What we achieved here, we achieved it together,” added Lea Avazeri. 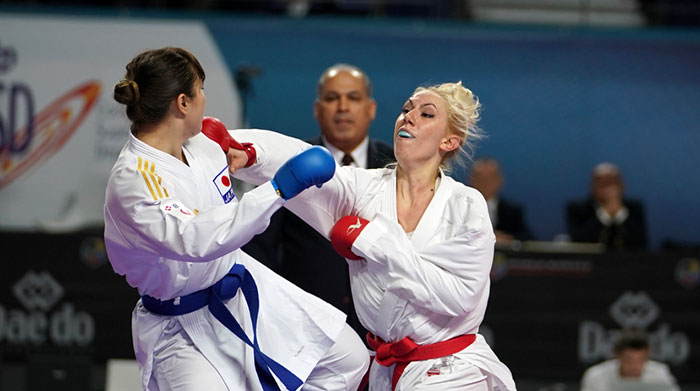 Eleni Chatziliadou of Greece became one of the stars of the event after producing the other big upset of the day. The two-time World Championships medallists defeated front-runner and defending champion Ayumi Uekusa of Japan in a thrilling final. In a repetition of the title-deciding bout two years ago in Linz, the Greek karateka overpowered the current WKF World ranking leader from Japan by 3-0 in an efficient display thus avenging the defeat she suffered in the 2016 World Championships.

“I have dreamt about this moment since I was a child. When I was a kid and started doing Karate, I told my father that I would be World champion one day, and now I made it!” said Eleni Chatziliadou.

“It was a very difficult final. Ayumi Uekusa is the hardest competitor, I have so much respect for her, so I am very happy that I could beat her,” added the 26-year-old karateka. 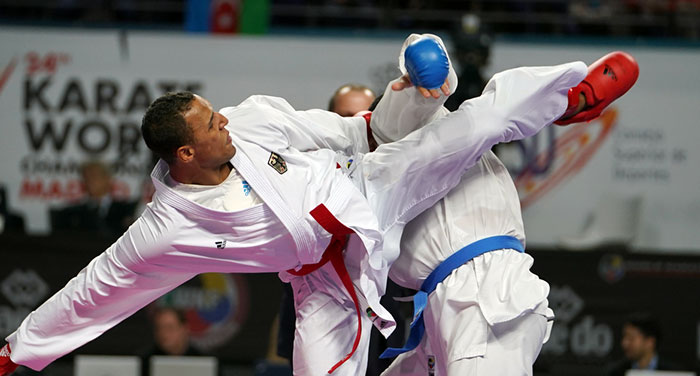 In an excellent display of top form, Jonathan Horne of Germany achieved the biggest success of over ten years of international career taking the gold medal of Male Kumite +84kg. The German fan favourite, who had the bronze medal in the 2008 World Championships as best result, defeated Sajad Ganjzadeh of Iran by 5-2 in a thrilling final bout. The Iranian karateka scored an early “Wazari” but Jonathan Horne bounced back with an outstanding “Ippon” and then two “Yuko” so to reach the top of the podium.

“It is indescribable. This gold medal shows that if you really want something when you finally get it, you cannot be any happier,” said Jonathan Horne.

“The final had a tough start for me. But when you receive the first point, you feel that you have nothing to lose. Then, I felt comfortable and did my best to win,” added the 29-year-old karateka. 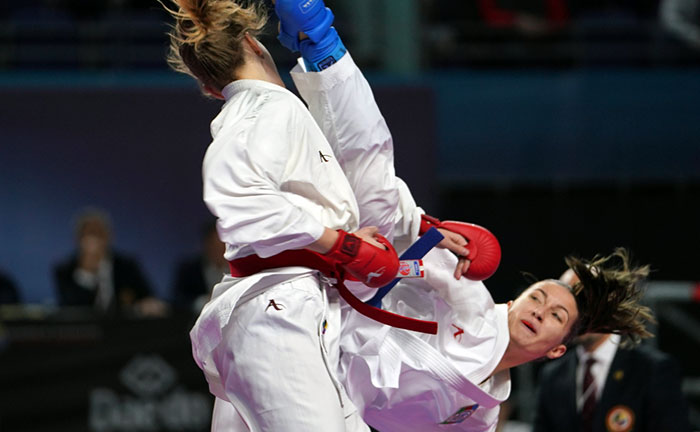 Irina Zaretska of Azerbaijan confirmed her rising star status with an impressive victory in the final of Female Kumite -68kg. The karateka from Azerbaijan, who was the 2017 Grand Winner edged Victoria Isaeva of Russia in a tight bout (1-1) decided by “Senshuu” or first awarded point. It was the first world title for the 22-year-old karateka who had already taken the crown in underage World Championships.

“It was very hard but I believed in me and I did my best in these championships. I am so happy that I am World champion,” said Zaretska.

Surprises dominated the competition thus continuing the dazzling pattern of the previous days of action, as young and promising athletes shocked with their quest to gold. In Male Kumite -84, Ivan Kvesic of Croatia became new World champion after defeating Valeri Chobotar of Ukraine in the final. The 21-year-old karateka claimed the world crown after edging his rival by “Hantei” or decision following a 0-0 bout.

Jovana Prekovic of Serbia also surprised and confirmed to be in excellent form. The 25-year-old athlete defeated favourite and World ranking leader Xiaoyan Yin of China in an electric final of Female Kumite -61kg. The Serbian karateka, who had the European title in 2017 as best result, overpowered the Chinese ace by 8-5 in a spectacular final. 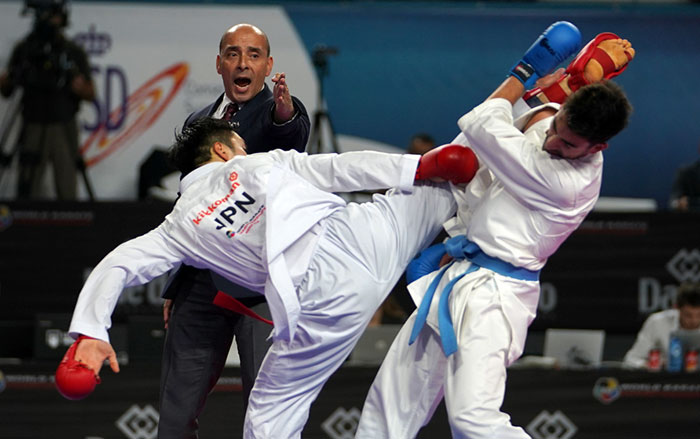 The category of Male Kumite -75kg also had the younger competitor prevailing. 26-year-old Bahman Asgari Ghoncheh of Iran defeated experienced Luigi Busa of Italy and took the world title in the disputed category. The Iranian karateka had two underage World Championships titles as best results and defeated the legendary Italian fan favourite by a slim 1-0.

In the most spectacular demonstration of the poise of younger generations, 21-year-old Dorota Banaszczyk of Poland produced one of the most surprising results of the day when the young karateka became new world champion of Female Kumite -55kg. The Polish promising karateka was placed in the 28th position of the WKF World ranking before the tournament. Nonetheless, Banaszczyk surprised and took the world crown after beating Jana Bitsch of Germany 2-0.

The last young karateka prevailing today was Angelo Crescenzo of Italy. The 25-year-old karateka beat Naoto Sago of Japan in Male Kumite -60kg in a point-filled final bout (5-2). Crescenzo arrived at the tournament as fourth-placed in the ranking and is defending European Championships runner-up. The Italian karateka gave the first gold medal to the powerhouse nation today. 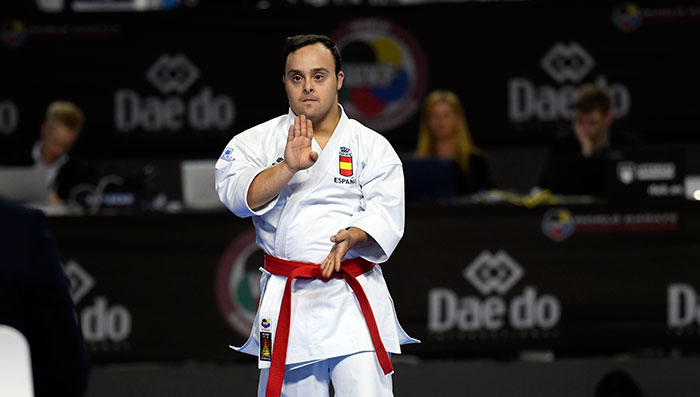 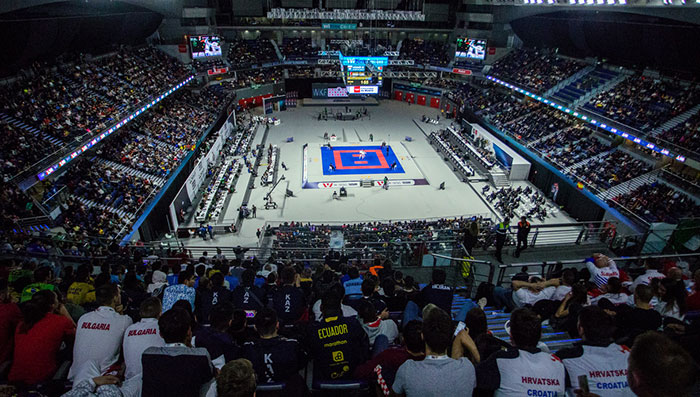