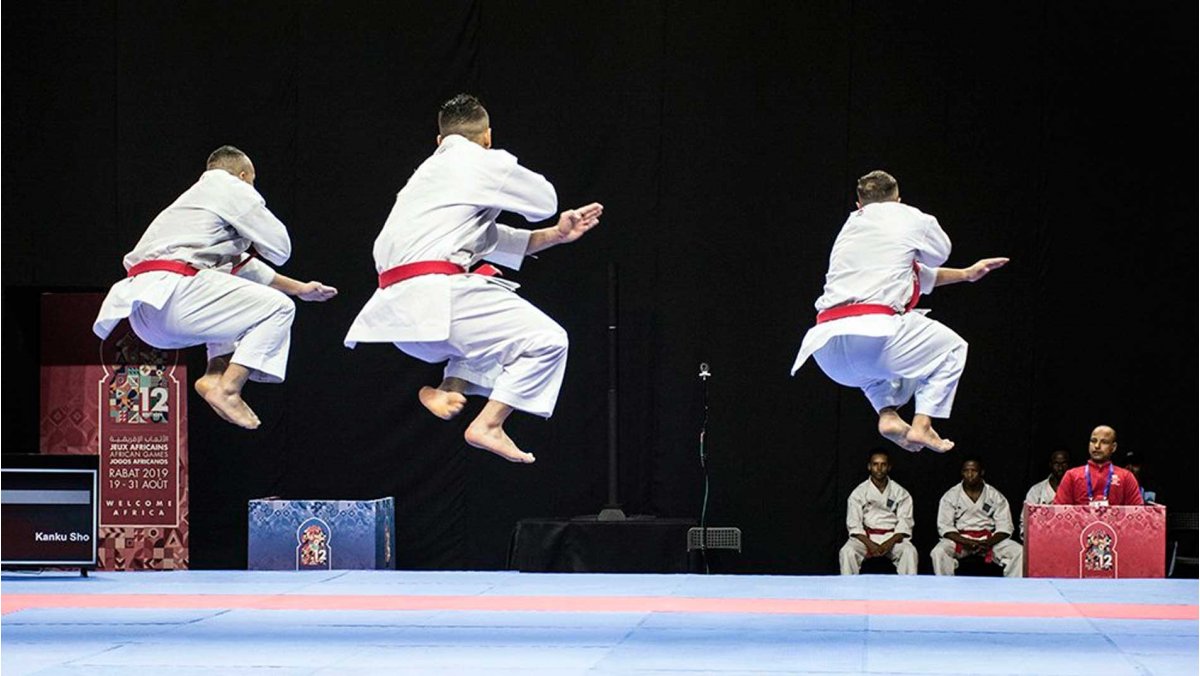 The Karate competition at the 2019 African Games begun with a memorable showcase of abilities on the tatamis of the event being held in Rabat (Morocco) and with top favourites reaching the finals. The representatives of the organising ry demonstrated top level claiming ten spots in the gold-medal bouts.

The Karate competition of the 2019 African Games begun with a memorable showcase of abilities on the tatamis of the event being held in Rabat (Morocco). The representatives of the organising ry demonstrated outstanding level after claiming no less than ten spots in the gold-medal bouts of the tournament.

The final of Female Kata will have the two most dominating African karatekas of the category clashing head-to-head for gold. Current UFAK silver medallist Sarah Sayed of Egypt will fight for the title against the defending continental champion Sanae Agalmam of Morocco as the two front-runners prevailed in the elimination rounds. Sarah Sayed who was 2016 World Championships runner-up made it to the final after getting a score of 25.5 with “Suparinpei” kata while local favourite Agalmam dominated her pool with “Unsu” kata and a score of 26.0. The final of the African Games in Female Kata will thus be a repetition of the title-deciding bout of the last edition of the UFAK Championships. 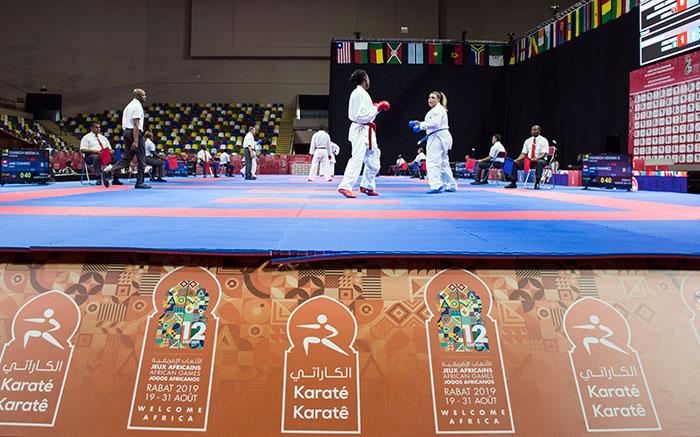 Sanae Agalmam’s successful performance was not the only remarkable demonstration of local karatekas during the first day of competition in Rabat. Khawla Ouhammad also reached the final in Female Kumite -55kg after upsetting Benin’s Oceanne Ganiero by 5-2. Her rival in the title-deciding bout is Yassmin Attia of Egypt who used her favourite status to qualify for the last bout. Attia who won bronze at the continental championships beat Algeria’s Widad Draou in semi-finals by 2-0.

Meanwhile, in Male Kumite -67kg local representative Abderrahmane Eddaqaq also made it to the final after beating Botswana’s Lemogang Koolopile Tsaone in semi-finals 3-0. The other contender for gold in the category is Algeria’s Faical Bouakal who edged Cameroon’s Jean Marc Kollo Ndzomo (3-2) in semi-finals.

The third spot in the finals for Morocco was taken by Nisrine Brouk in Female Kumite -68kg. Brouk produced one of the biggest upsets of the day thus extending hosts’ success after eliminating top favourite Lamya Matoub of Algeria. The young karateka from Morocco only had one appearance at a major international event under her belt but claimed an outstanding 8-2 victory in semi-finals over continental silver medallist and World Championships bronze medallist Matoub. The other front-runner of the category did manage to qualify for the final since continental bronze medallist and winner of 2019 Karate 1-Premier League Dubai Feryal Abdelaziz of Egypt dominated the other side of the pool. 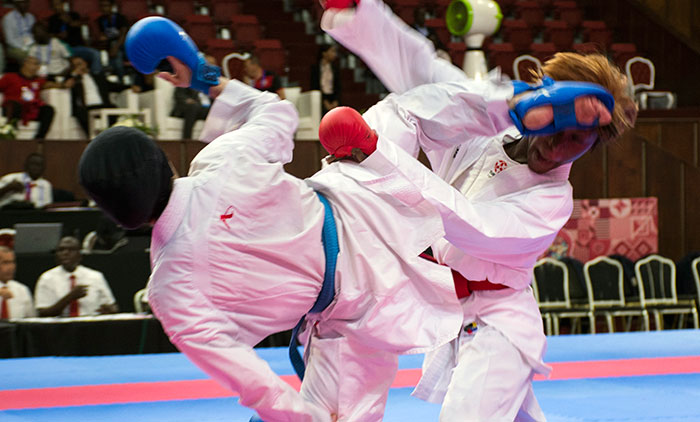 The Moroccan showdown continued in Female Kumite -50kg since Aicha Sayah also qualified for the final. The continental champion aims at extending her domination of the category following a 3-0 victory in semi-finals over Congo’s Fatoumata Diabate Pembe. The gold medal bout will not be an easy task for the promising local karateka since the other spot in the final was claimed by current continental silver medallist Radwa Sayed of Egypt. It will be a repetition of the title-deciding bout of the UFAK Championships barely one month ago.

The final of Male Kumite -60kg will also have Moroccan representation. Abdessalam Ameknassi reached the title-deciding bout of the category after edging Fallou Beye of Senegal 2-2. His rival in the final will be Egypt’s Malek Salama who took a slim 1-0 victory in semi-finals over Tunisia Nader Azzouzi.

One of the biggest stars of Moroccan karate Achraf Ouchen also used the home-ground factor in his favour and took the flag of the host ry to the final of Male Kumite +84kg. The 2016 World Championships silver medallist upset Taha Tarek Mahmoud of Egypt in semi-finals 5-0 and qualified for his first final since his silver medal at the 2017 Karate 1-Series A Toledo. The other side of the tatami will be taken by Algeria’s Hocine Daikhi who edged Libya’s Dabaa Mohamed in semi-finals (2-1). 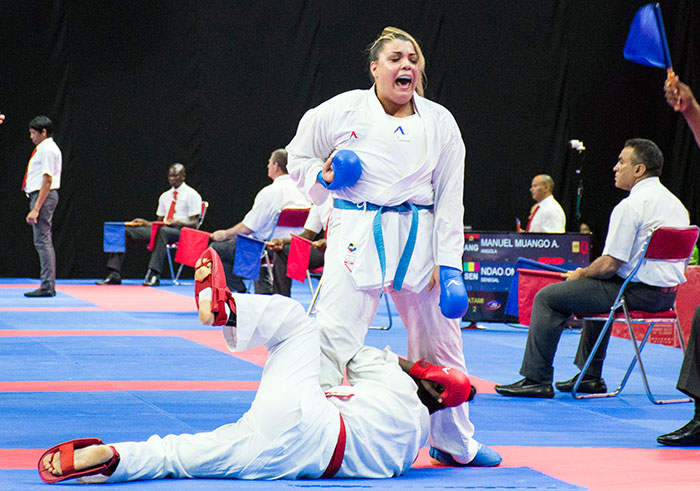 The outstanding performance of Moroccan athletes today was completed by Nabil Ech-Chaabi in Male Kumite -84kg. The young karateka who had made his debut in senior competitions one month ago at the continental championships surprised favourites and made it to the final after beating Mali’s Ouattara Mamadou in semi-finals 3-0. The other spot in the final is for Tunisia’s Thameur Slimani who beat Samy Brahimi Anys of Algeria in semi-finals 5-2.

Favourites took a stand in Female Kumite +68kg since current continental champion Chahnez Jami of Tunisia qualified to fight for back-to-back UFAK and African Games titles. The karateka who is ranked 19th in WKF World ranking claimed a convincing 6-0 victory over Cameroon’s Stella Ogandoa Nsioma in semi-finals. The other spot in the final is for Egypt’s Menna Shaaban Okila who fought her way to her first final in major international events after beating Botswana’s Mosa Maleke by 6-0 in semi-finals.

Boutheina Hasnaoui of Tunisia against Algeria’s Chaima Midi in Female Kumite -61kg, Abdalla Mamduh Abdelaziz of Egypt against Cameroon’s Etienne Martial Nonagni Bayomog in Male Kumite -75kg and the teams of Egypt against Morocco in both Female and Male Team Kata completed the list of finalist of the first day of action of Karate at the African Games. 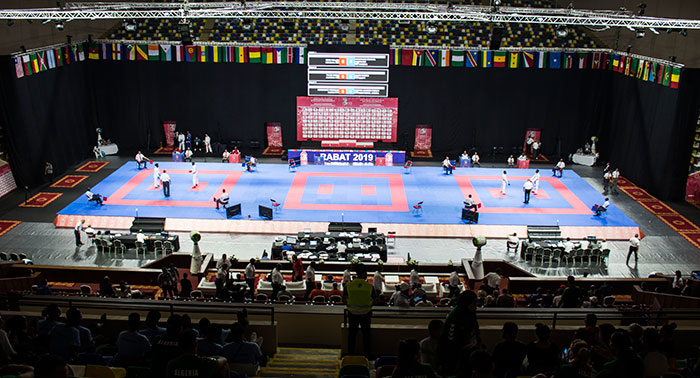