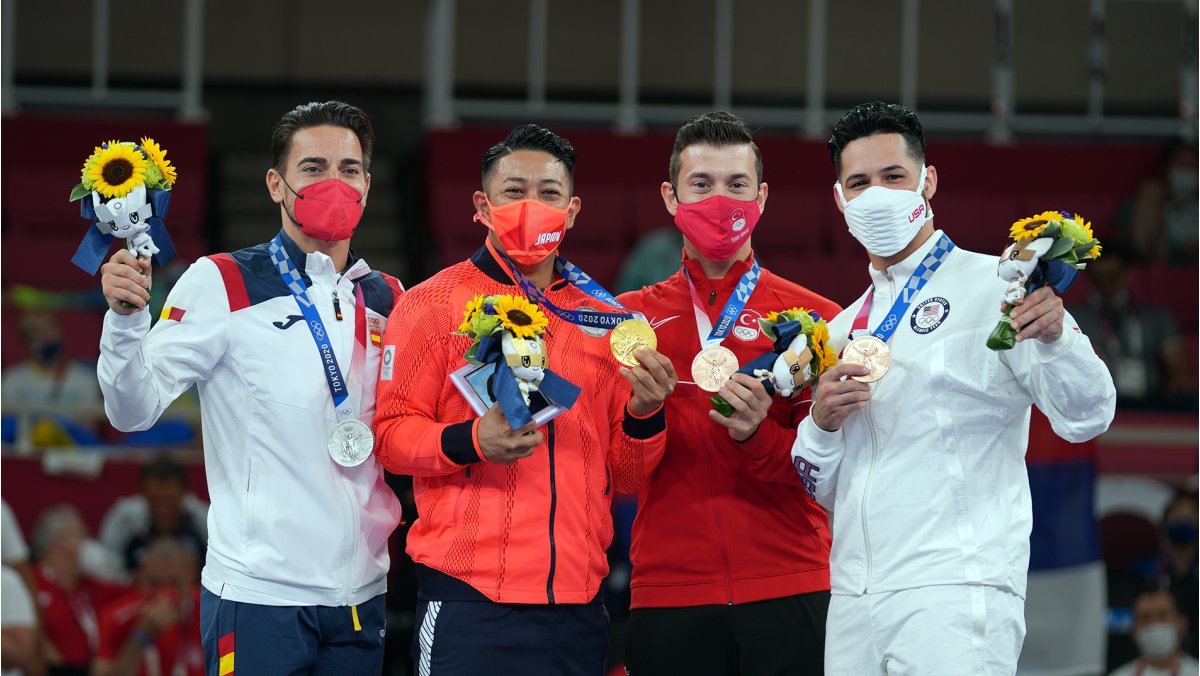 Coming into Tokyo 2020, Kiyuna said that he was capable of scoring a perfect score, such was the belief in his admittedly formidable abilities. In the end, he wasn’t far off. He scored an impreRyo Kiyuna (JPN) triumphed over long-time rival Damian Quintessive 28.72 in the final to Quintero’s 27.66.

“I didn’t get to where I am without being supported by a lot of people, I’m full of gratitude,” said Kiyuna, who carried a photo of his late mother with him to the medals podium following his win. “I wanted my mother to see the view from the top of the podium, and to tell her that I kept my promise of winning gold at the Olympic Games. She can rest assured.” 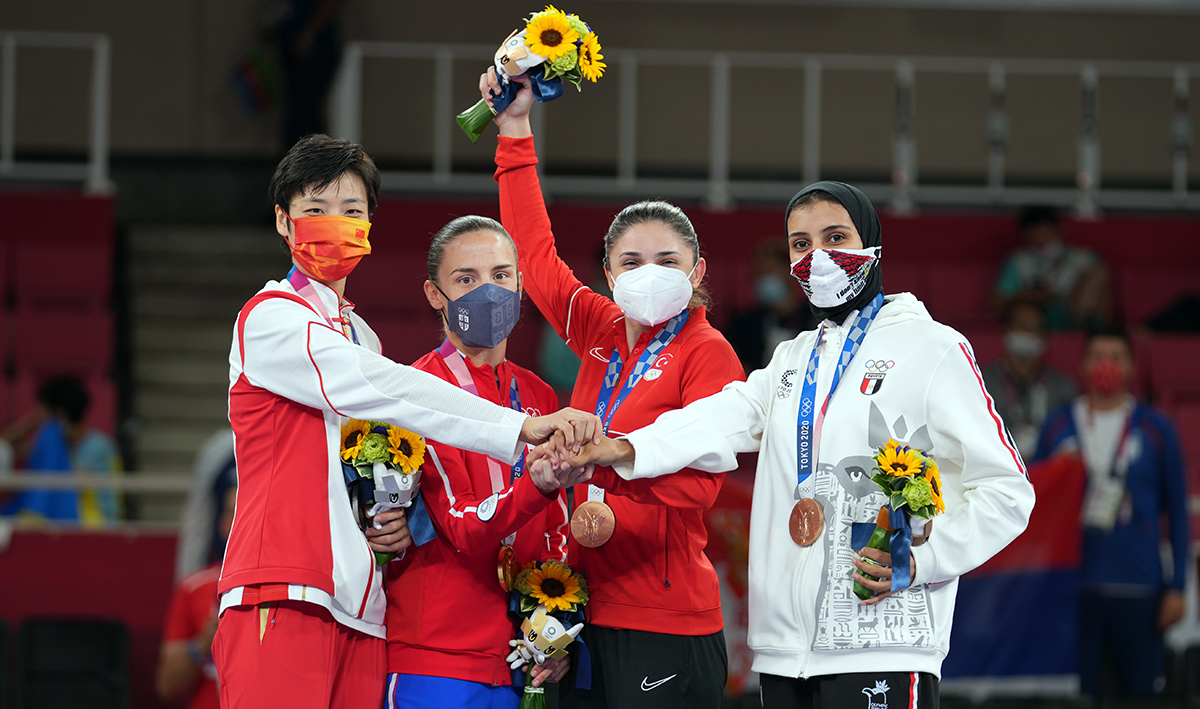 Kiyuna will have brought great delight to the entire country of Japan, whose athletes had so far been kept off the top spot on the podium at the venerable martial arts hall. Kiyou Shimizu came close the previous night but had to settle for silver after being pipped to gold by Spain’s Sandra Sanchez.

“I appreciate standing on this stage at the Olympics,” said Kiyuna, who tipped his hat to everyone involved in organizing the event during the pandemic. “There are so many people who have been working so hard with COVID-19 and I appreciate that I can stand here even in this situation.”

Born in Okinawa, the birthplace of Karate, Kiyuna is a three-time World Champion that is quite clearly at the top of his game. Indeed, the 31-year-old has not lost a bout since February 2018. 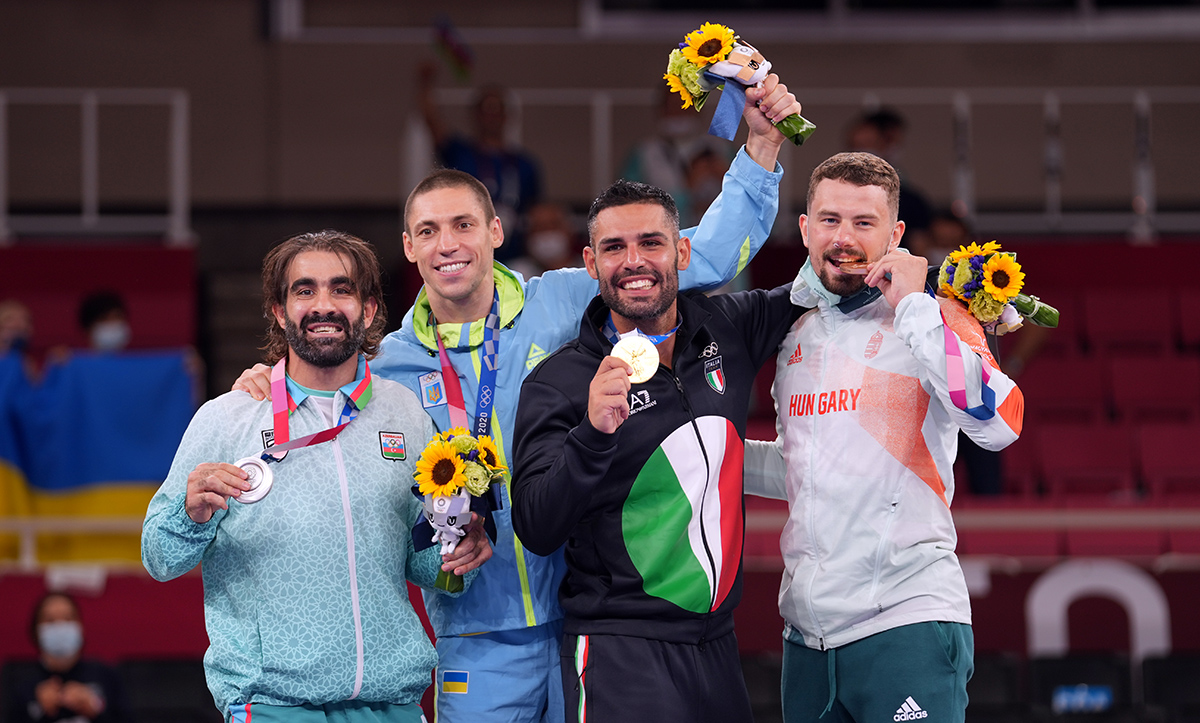 The gold medal will be a just reward for all the hard work and dedication Kiyuna has put into his craft since he started practicing Karate at the age of 5. He claims to never take a day off from the dojo, training 365 days a year – five to six hours daily on technical practice and one to two hours on physical training.

His message tonight for everyone watching at home was a simple one: “Never give up, always continue, and follow your dreams.”

Taking home the bronze medals in the Men’s Kata were Ali Sofuoglu (TUR) and Ariel Torres (USA), who can be equally proud of their excellent showings today.

“It’s an indescribable happiness for me because it’s the first time for Karate being in the Olympics, and I am one of only 32 medallists here,” said Sofuoglu. “We have no limits in Karate, so we shouldn't stop here. We need to strive to be better.” 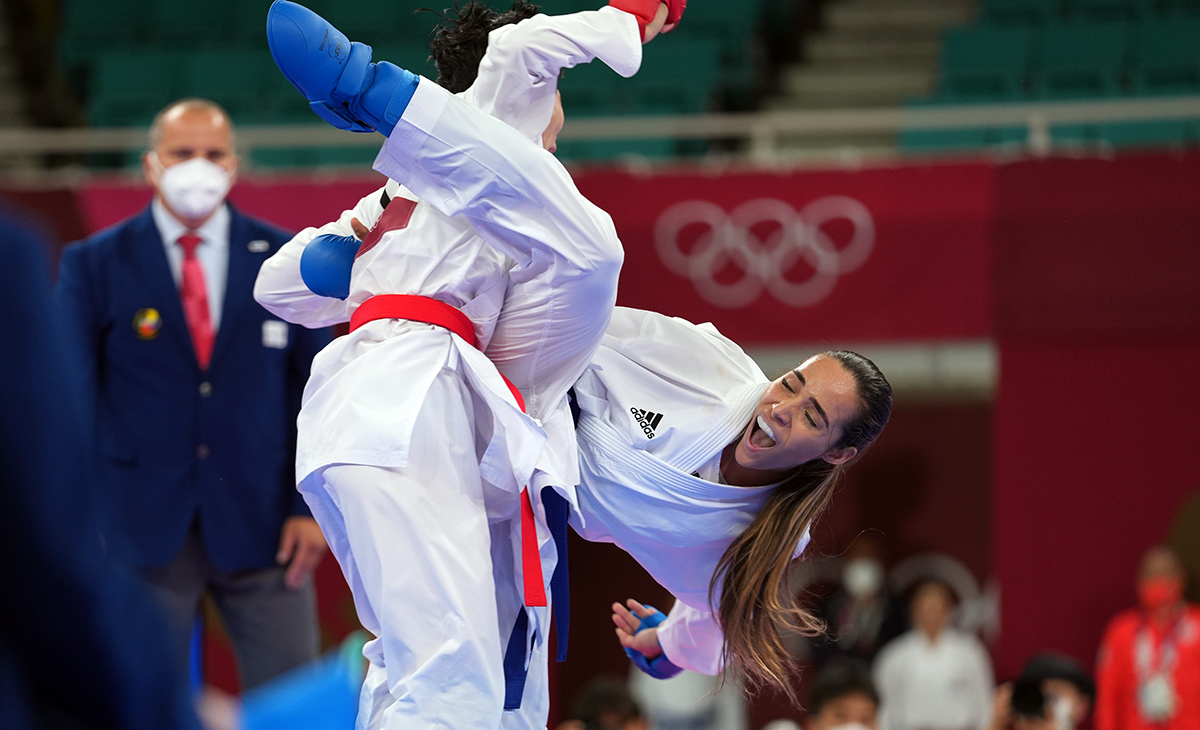 The perennially humble Torres said he was confident yet pragmatic about his chances of winning a medal at these Games. “Looking back I have come a really long way,” he said. “I am standing here and all I want is to do the best Kata I can ever do and if I can win a medal, God willing, I’ll win it and if not I’ll feel like God had a plan for me from the very beginning.

“And if it wasn’t a medal that’s fine, we keep pushing forward and I’ll keep fighting. I never gave up.”

So little separated the two that neither was able to score a point during the bout and the gold medal was awarded by Hantei (judges’ decision). As gutting as it was for Yin to walk away with the sliver, it was a fully deserved victory for the current World Champion who had outwitted and outscored her opponents throughout the day. 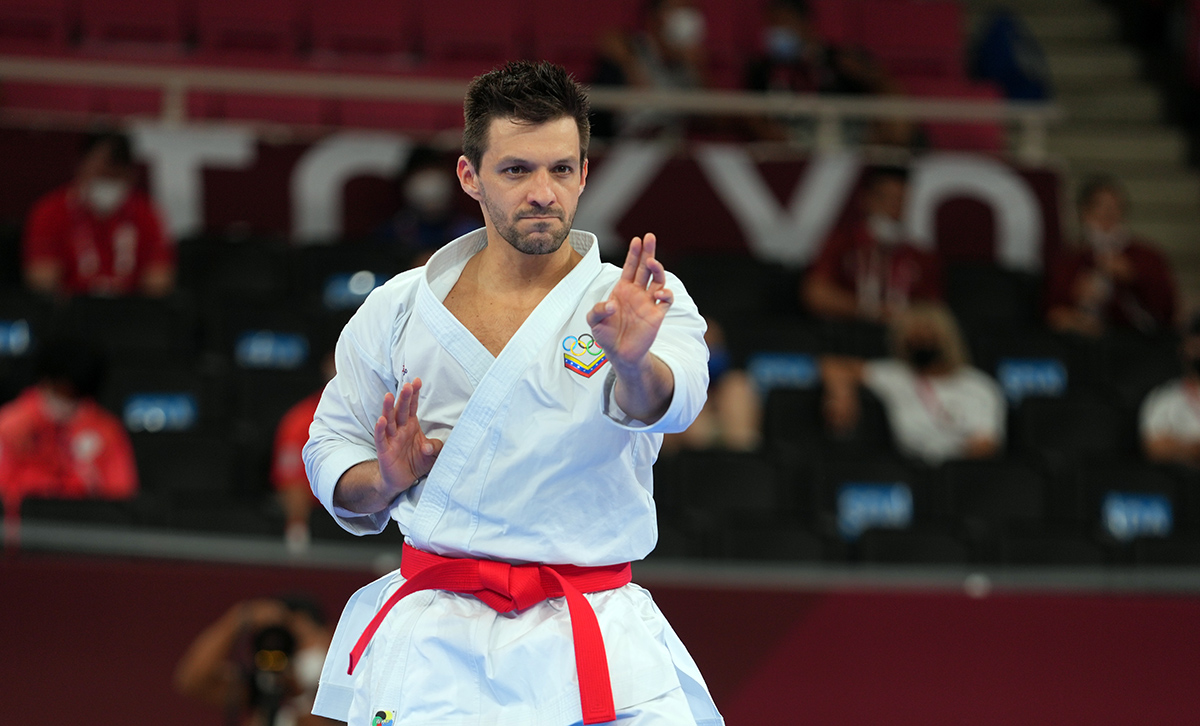 “For my country this is a very important medal as it is the second gold medal for Serbia at these Games,” the 25-year-old Prekovic said. “And I am so happy that Karate brought this medal to my country.”

Prekovic was also full of praise for her fellow karatekas for showcasing the best that the sport has to offer on the world’s biggest sporting stage: “It’s a historic moment for us, for Karate, to be here at the Olympic Games and we showed that we are all strong and brave and deserve these medals.”

In the Men’s Kumite -75kg, Karate legend Rafael Aghayev (AZE) fell agonizingly short of Olympic glory in what he claims will be his last competition before retirement. World No. 1 Luigi Busa (ITA) claimed top honours in the gold medal match with a hard-fought 1-0 victory.

“I’m very happy to have won this gold medal and I’m going to be celebrating with my family and my whole team,” said Busa. “It’s been a really fantastic experience and if I can do anything to help Karate be a part of Paris 2024 or Los Angeles 2028 I will.”

CLICK HERE to go to the Tokyo 2020 - Karate microsite. 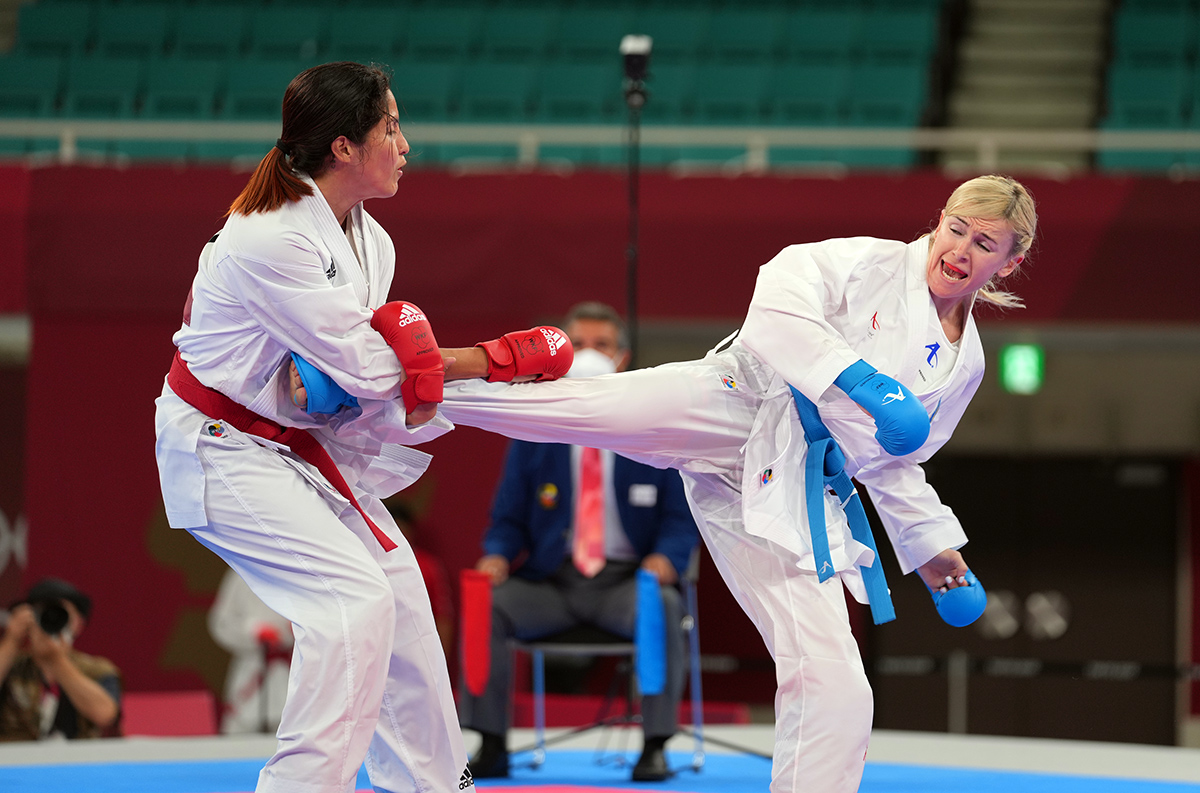