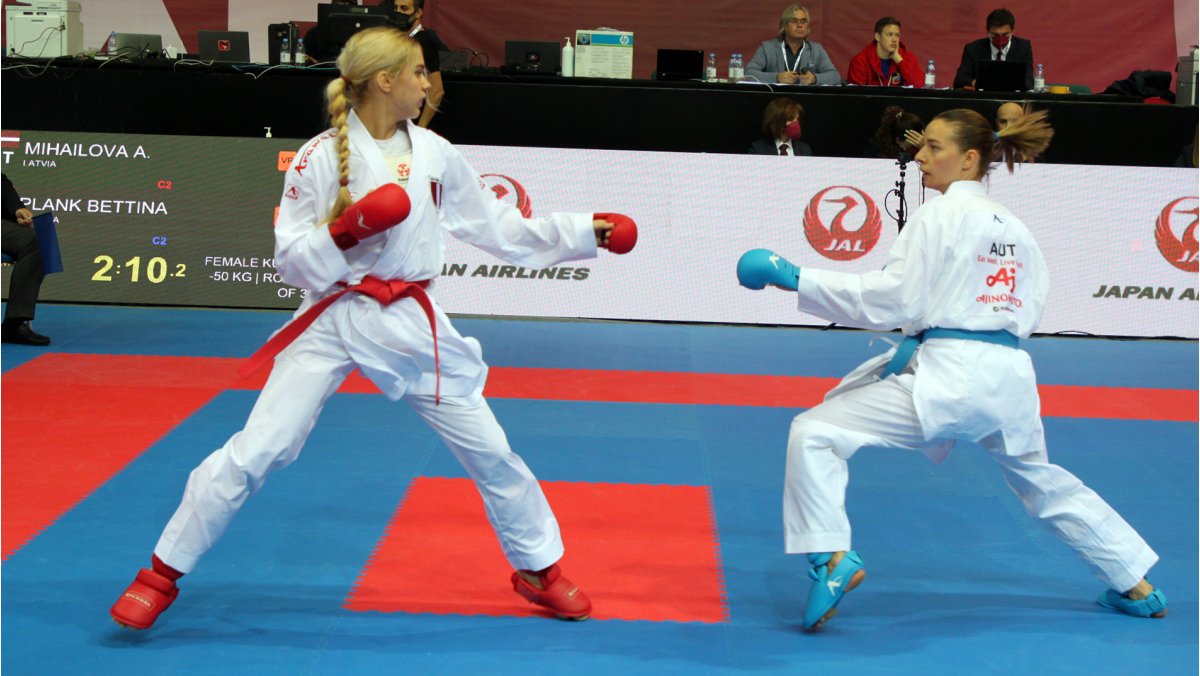 The Karate 1-Premier League Moscow started today with Karate’s Olympic athletes qualifying for the medals rounds of the event.

Sandra Sanchez of Spain, Sakura Kokumai of the United States, Bettina Plank of Austria, Ali Elsawy of Egypt, Abdallah Abdelaziz of Egypt, and Moldir Zhangbyrbay of Kazakhstan were among the Olympic karatekas succeeding on the opening day of the competition.

Following her historic performance at the Olympic Games Tokyo, Sandra Sanchez of Spain became one of the big winners of day 1 of #Karate1Moscow.

The Olympic gold medallist dominated the Female Kata competition with a top score of 27.66 in her “Papuren” Kata, as she showed excellent form in her first appearance after winning the Olympic crown.

“I am very thrilled to go back to the competition since the emotional journey of the Olympics. I still can’t believe that I won gold at the Olympics and I am very pleased to be competing again. It is what I love to do,” said Sandra Sanchez.

The final of Female Kata will have an Olympic flavour as Sanchez will clash for the title against Olympian Sakura Kokumai of the United States. The Pan American Games title-holder who finished in fifth place at the Olympics topped her pool with a score of 25.6 also with “Papuren” kata. 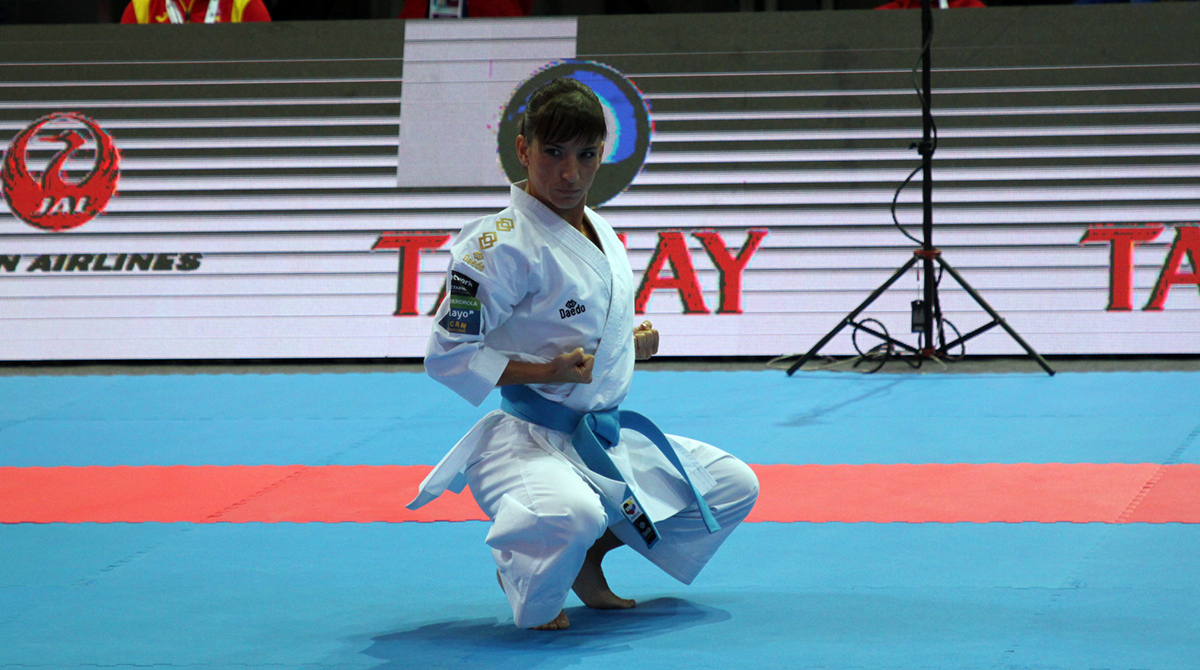 Fresh of the bronze medal at the Olympics, Bettina Plank of Austria showed excellent form and qualified for the final round of the event of the category.

Plank who won bronze at the Karate 1-Premier League Dubai this year defeated Jelena Pehar of Croatia in semi-finals 5-0.

The other spot in the final was claimed by also Olympian Moldir Zhangbyrbay of Kazakhstan. The silver medallist at the 2021 Karate 1-Premier League Lisbon who finished in the fourth place of her pool at the Olympics edged Yorgelis Salazar of Venezuela in semi-finals 3-1.

One Olympian and one athlete who barely made it to the Olympics will take the spotlight in the final of Male Kumite -67kg.

After finishing in third place in the pool at the Olympics, Ali Elsawy of Egypt took a stand in Moscow and achieved a convincing 7-3 victory over Youness Oualad Haj Amar of Belgium.

The Olympian will fight for the title against Yves Martial Tadissi of Hungary who nearly qualified for the Olympics as he ended in fourth place at the Olympic Qualification tournament. 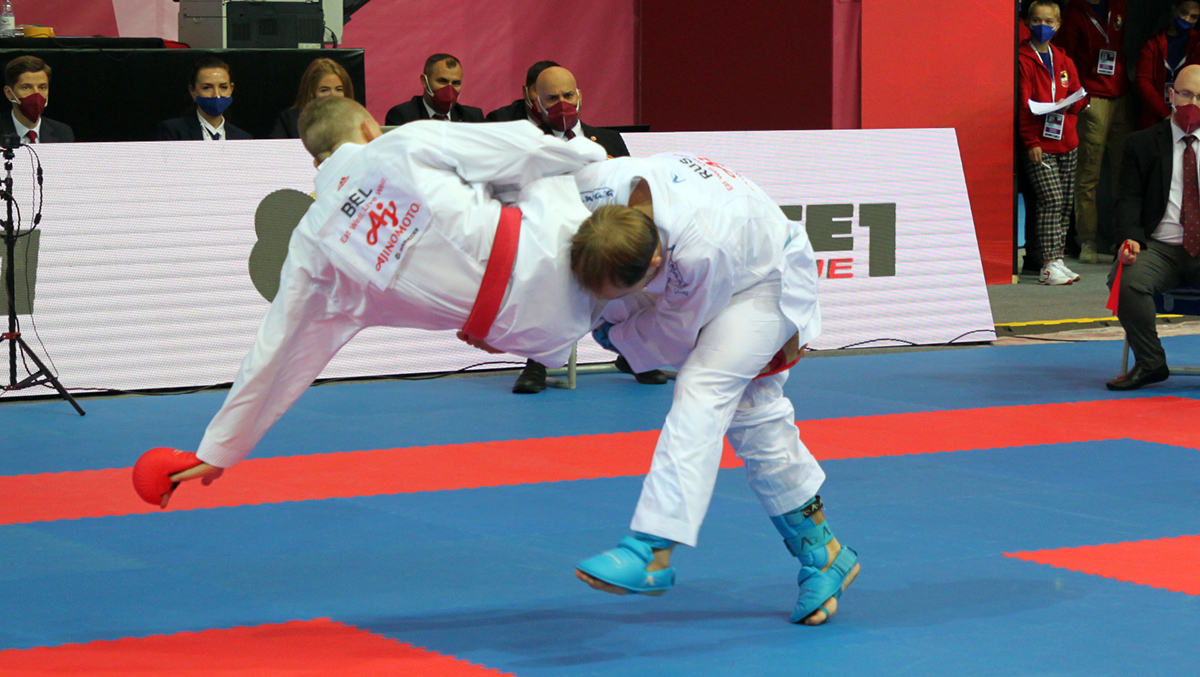 The last Olympic athlete succeeding in Moscow was Abdallah Abdelaziz of Egypt in Male Kumite -75kg. The winner of the 2021 Karate 1-Premier League Cairo who ended in the fifth place of his pool at the Olympics defeated Quentin Mahauden of Belgium in semi-finals 6-3.

The other semi-final bout finished with a victory by “Hantei” or decision for Daniele De Vivo of Italy (0-0). It is the first final in senior competition for the promising Italian.

Local karatekas used the home-ground factor to succeed at the event. One of the most promising Karate athletes in Russia, Anna Chernysheva of Russia confirmed her raising status with a forceful qualification to the final of Female Kumite -55kg.

The athlete who qualified for the Olympics defeated Jennifer Warling of Luxembourg 5-1 in the semi-finals and will fight for the crown after winning the continental title this year in Porec (Croatia).

The local athlete will clash for the title against Sabina Zakharova of Kazakhstan. Completing an impressive performance, Zakharova added another final for the Kazakh delegation after edging local representative Alexandra Belousova by “Senshuu” or first-unopposed point 4-4.

The second spot in the finals for Russian karatekas was claimed by Evgeny Plakhutin. The current European Championships runner-up took a slim 1-0 victory in the semi-finals of Male Kumite -60kg over Olympian and current World champion Angelo Crescenzo of Italy.

In another clash of Russia vs Kazakhstan, Plakhutin will fight for gold against Kazakh athlete Kaisar Alpysbay. The winner of the 2021 Karate 1-Premier League Lisbon edged Abdel Ali Jina of Morocco 3-3. 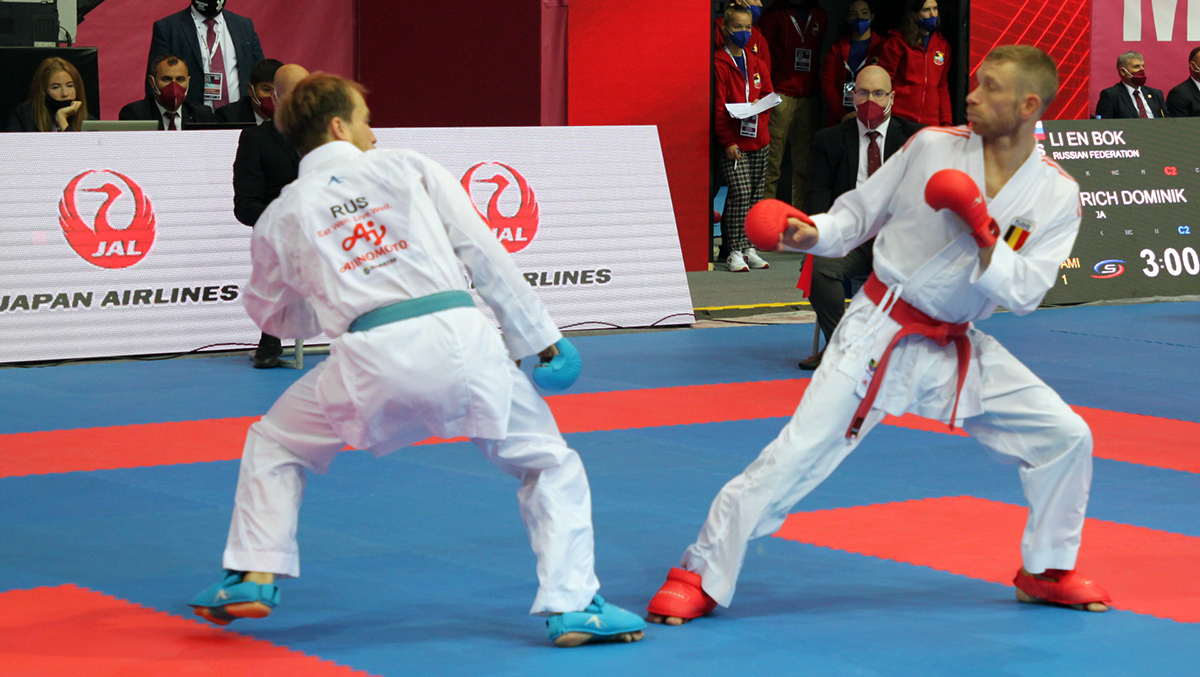