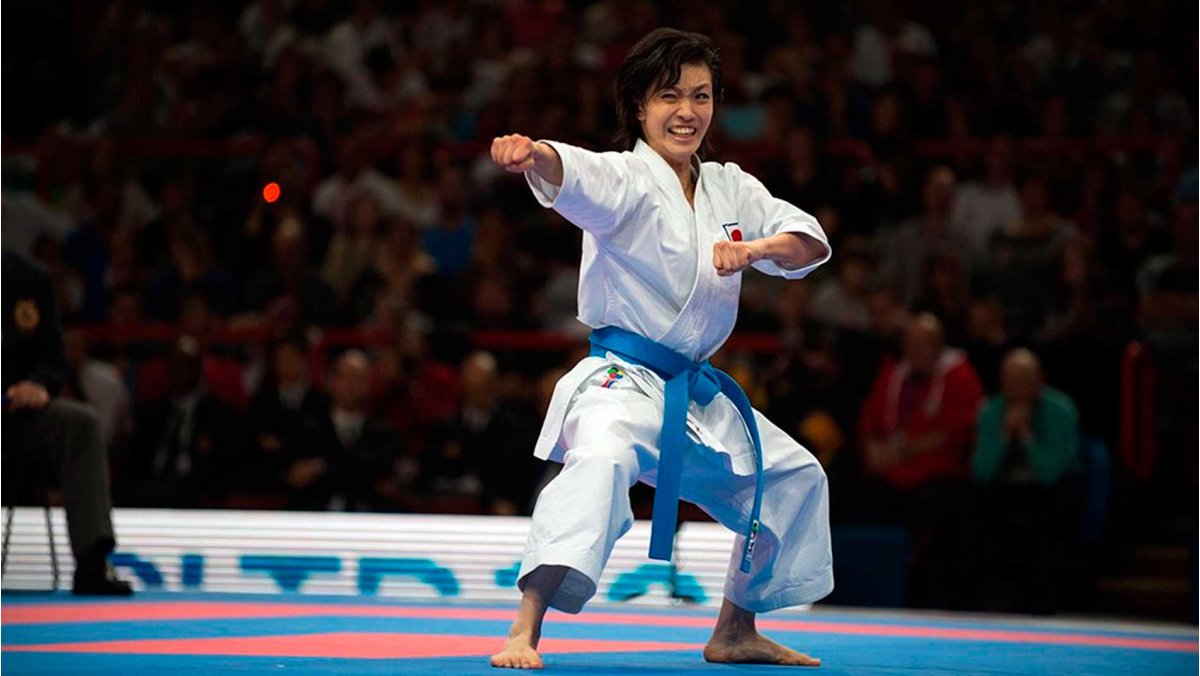 We go back in time to 2012 in our second episode of the Karate World Championships flashback, and we travel to Paris to witness one of the biggest Karate events in the history of the sport.

We go back in time to 2012 in our second episode of the Karate World Championships flashback, and we travel to Paris to relive one of the biggest Karate events in the history of the sport.

The 2012 Karate World Championships in Paris are considered as the epitome of the magnificence of Karate events. Flawless organisation, memorable performances, athletes at their best, Karate values constantly displayed and a record-breaking attendance at a splendid sports hall… Paris 2012 had all the ingredients of one of the most exceptional and amazing Karate tournaments of all times.

Belgrade 2010 had laid the groundwork for a massive Karate event. Two years later, all the expectations were exceeded. In an example of the remarkable social appeal of Karate in France, thousands of enthusiasts of the sport of all ages flocked Paris Bercy to experience the unprecedented sporting spirit of the Karate World Championships. Not only the sports hall of the French capital had a full house throughout the event; TV audiences followed the pattern and over 25 million people worldwide tuned in to see the top karatekas in the globe competing for the world crown. 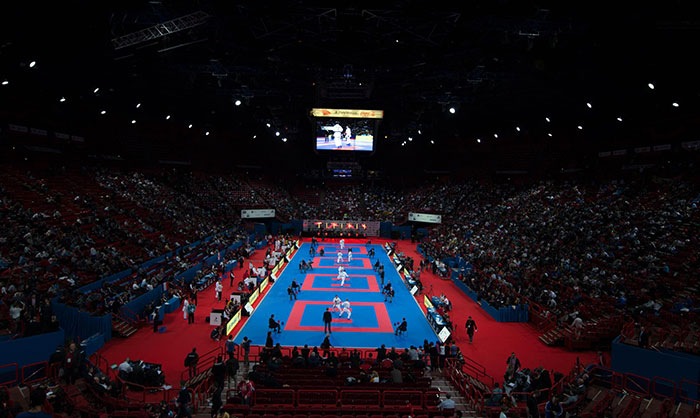 RIKA USAMI, QUEEN OF THE WORLD

It was arguably the most exceptional Karate performance of all times. The sport of Karate would never be the same, and all the glorious moments of this discipline would forever be measured by the historic display of Karate’s excellence presented in the final of the Female Kata competition.

When Japan’s Rika Usami took the stage of Paris Bercy to compete for gold against local heroine Sandy Scordo, the world of Karate held its breath. At 26 years old, the Japanese Kata ace had reached the title-deciding bout after taking bronze two years earlier in Belgrade. On the other side of the tatami awaited Sandy Scordo, renowned karateka with a whole country supporting her every move at the event. 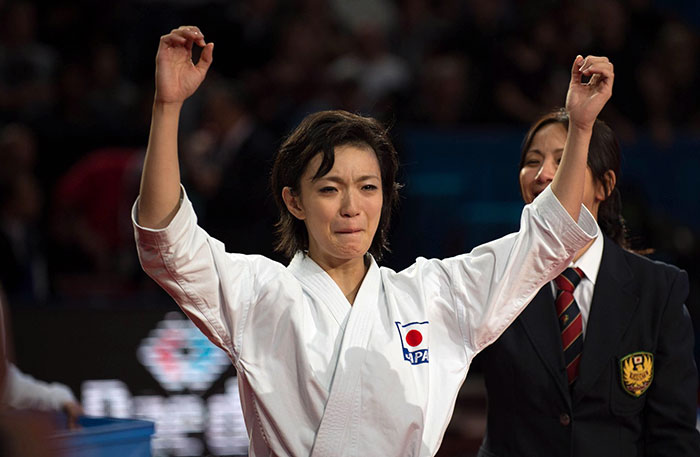 Everything would change when Rika Usami started her presentation of “Chatanyara Kushanku” kata. It was the perfect combination of passion, power, concentration, ‘kime’ and tradition. When the Japanese karateka finished the last move, the full arena raised from their seats to acclaim the glorious performance. Among tears not only from Rika Usami herself but from Karate fans in the audience, the Japanese idol was crowned as Kata champion and legend of the sport.

Rika Usami’s historic performance caused such an impact in the world of Karate, that over 6 million people have watched her perfect kata on WKF YouTube channel. Relive the memorable moment here: https://www.youtube.com/watch?v=iiiznDpoapQ

Paris 2012 was a true celebration of French Karate. Local karatekas took the opportunity of the perfect event to shine in front of family and friends and presented an impressive participation so to end up topping the medal table of the tournament. With 13 medals and seven golds, France wrapped up a memorable participation at home. The event confirmed a host of top French karatekas in the elite of the sport and established France as major Karate powerhouse. 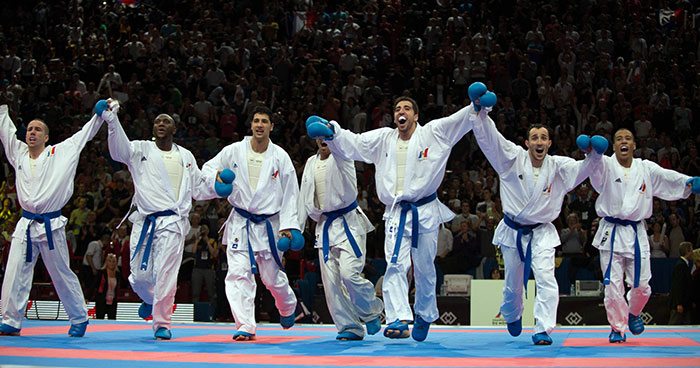 Among the successful French karatekas using the home-ground in their favour, Alexandra Recchia took the spotlight with a remarkable performance in Female Kumite -50kg. The fierce competitor had led France to win gold in Female Team Kumite two years earlier, and she had already taken a medal (bronze) in the 2008 World Championships, also in the team competition. However, it was at home when the Karate Star especially dazzled. In a French celebration, Recchia defeated China’s Hong Li in the final in a spectacular performance (8-1) so to win her first gold medal in individual competition at the World Championships. Not much later, Recchia contributed to the gold medal in Female Team Kumite thus taking home two top awards in Paris 2012. 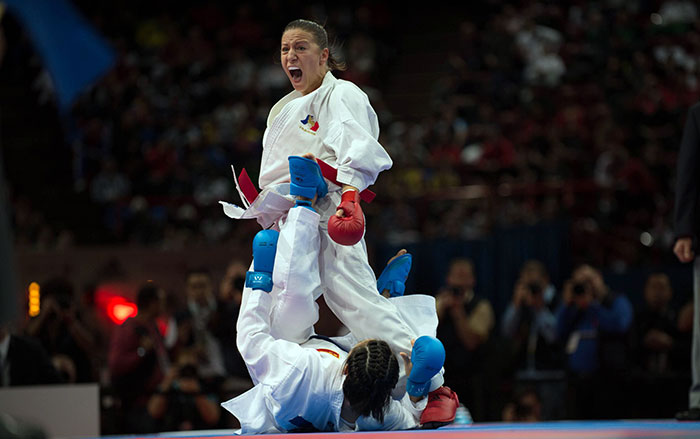 Nonetheless, it would be in the team competition when the local heroes demonstrated an outstanding level. Both team kumite categories were dominated by the French athletes who used the support of the stands to reach the top of the podium. In Male Team Kumite, the local side defeated Turkey while the French ladies beat Croatia in the final, much to the delight of the thousands of fans filling up Paris Bercy sports hall.

Two other competitors achieved the star status in Paris in 2012. Antonio Diaz of Venezuela demonstrated to be one of the best Kata competitors of all times after taking his second consecutive world title. After defeating legend Luca Valdesi of Italy in the final in Belgrade, the Venezuelan hero repeated the remarkable accomplishment of winning the world crown, this time beating local representative Vu Duc Minh Dack. Moreover, Antonio Diaz managed to reach the top of the podium winning all his bouts by unanimous decision (5-0), the first time that this achievement was completed at World Championships. 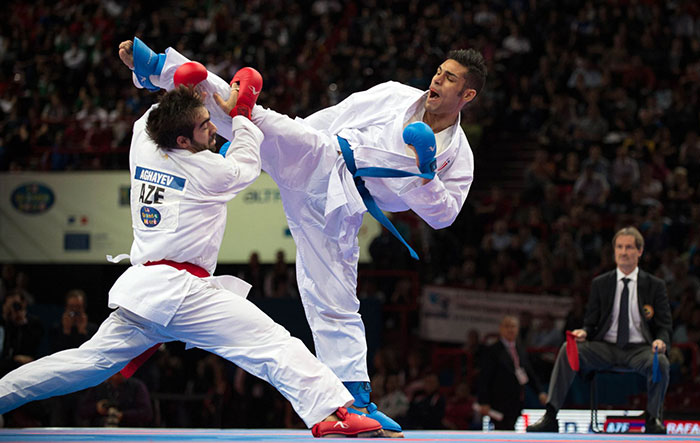 Luigi Busa of Italy became the other of the big name of the event with his victory in Male Kumite -75kg. The Italian karateka got the World crown after defeating superstar Rafael Aghayev of Azerbaijan in a memorable final. The popular athlete from Azerbaijan reached Paris with three consecutive World titles under his belt, and he was the big favourite to continue making history in the sport. However, Luigi Busa surprised and after a ferocious final bout that ended 0-0, the Italian karateka won the world crown by ‘Hantei’ or unanimous decision (4-1).

Nearly 1000 competitors from 116 countries took part in the memorable event, thus breaking all participation records until that moment. France topped the final medal table, followed by Japan and Italy, with over 20 nations claiming medals at the tournament. The 2012 Karate World Championships represented a milestone in the history of the sport; this event demonstrated the spectacular sporting spirit and the exceptional social impact of a major Karate event.