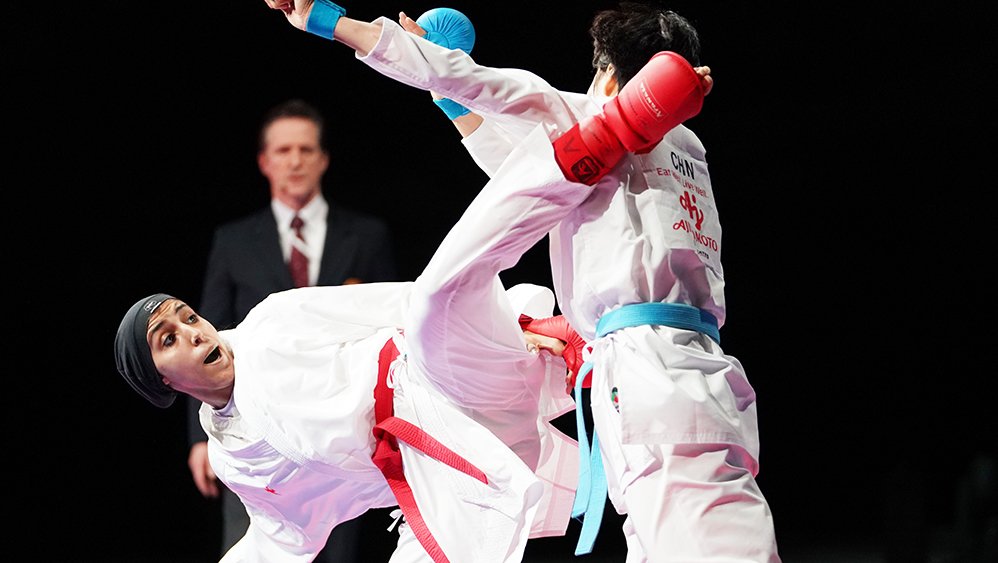 The leaders of the four Male categories of the Karate Olympic standings remain unchanged after the last update; however, the race to take the four positions in each category that give direct qualification for Tokyo 2020 gets even more intense with differences reducing.

Three-time World champion Ryo Kiyuna of Japan continues on top of the Male Kata category after his victory in the Karate 1-Premier League Rabat. Damian Quintero of Spain, Ali Sofuoglu of Turkey, Mattia Busato of Italy and Antonio Diaz of Venezuela claim the rest of the qualifying positions as another Japanese competitor, Kazumasa Moto is ranked sixth at 457.5‬ points of the fifth place. 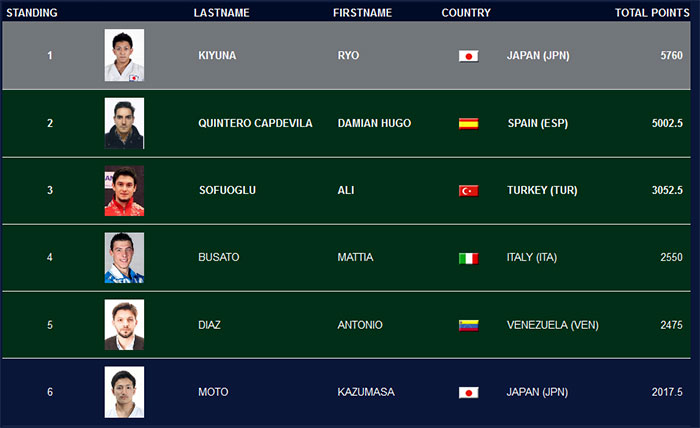 Two competitors who could not claim medals in Rabat – Steven Dacosta and Luigi Busa – maintain their leadership of their categories despite failing to reach the podiums in the last major event. France’s Steven Dacosta keeps the first place in Male Kumite -67kg. In this category, World champion Angelo Crescenzo of Italy is second at only ‭180 points after his bronze medal in Rabat‬. One of the sensations of the season of Karate 1-Premier League Darkhan Assadilov of Kazakhstan and Vinicius Figueira of Brazil complete the list of qualified positions while Grand Winner Eray Samdan of Turkey is fifth at 360 points. The first Japanese competitor is Naoto Sago in eight place. 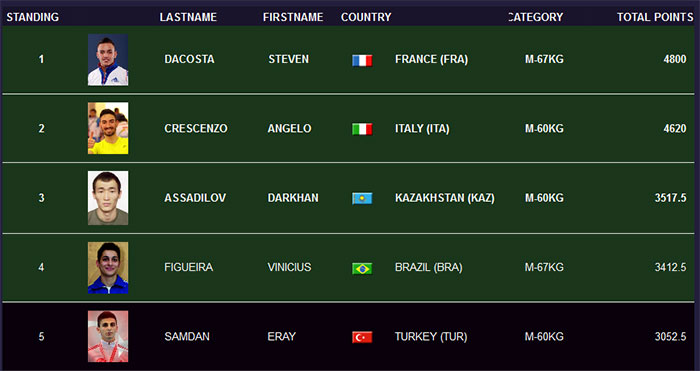 Meanwhile, in Male Kumite -75kg Italy’s Luigi Busa used his victory at the European Championships to remain on top of the category. Five-time World champion Rafael Aghayev of Azerbaijan reduced the differences following his bronze in Rabat and is placed only at ‭45‬ points. Ken Nishimura, who is the first qualified Japanese athlete, World champion Bahman Asgari Ghoncheh of Iran and Stanislav Horuna of Ukraine who won in Rabat take the rest of the qualifying positions. 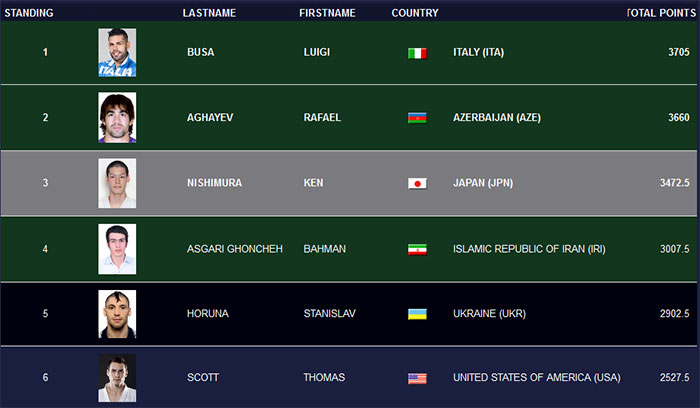 Favourites are taking the four positions in Male Kumite +75kg as the current World champions in the two merging categories, the current Grand Winner and a former Grand Winner dominate the category. Turkey’s Ugur Aktas continues on top after his bronze in Rabat with Jonathan Horne of Germany, Iran’s Sajad Ganjzadeh and Croatia’s Ivan Kvesic wrapping up the four top positions. Ryutaro Araga in seventh place claims for the moment the Japanese ticket in the category.

The Karate Olympic standings in female categories have two new leaders. Xiaoyan Yin of China takes the first place in Female Kumite -61kg after her victory in Rabat, with a slim ‭150‬ point-difference over second-placed Giana Lotfy of Egypt. Merve Coban of Turkey and Gwendoline Philippe of France claim the rest of the four spots. The qualifying place for the Japanese representative is for the moment for Mayumi Someya in the 14th position. 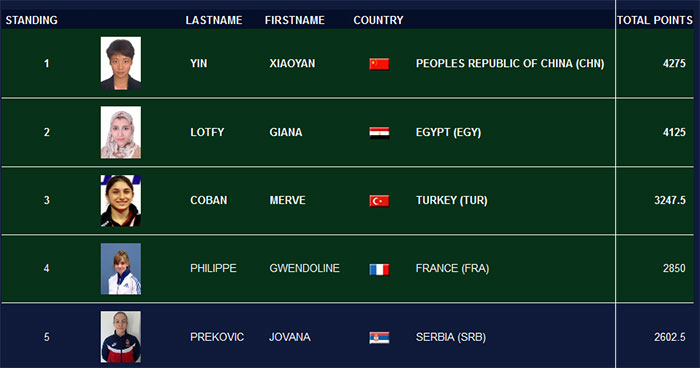 The other new leader is Elena Quirici of Switzerland who prevailed in Rabat and now heads the category of Female Kumite +61kg. Less than 500 points separate the four top-positions in one of the tighter categories. World champion Eleni Chatzlidou of Greece, Grand Winner Ayumi Uekusa of Japan and World title-holder Irina Zaretska of Azerbaijan are in qualifying spots. The rivalry is so intense in this category that the last place to get the direct qualification for the Olympic Games goes to Meltem Hocaoglu of Turkey in the eight place due to the presence of another Japanese competitor – Kayo Someya – and the merging of categories. 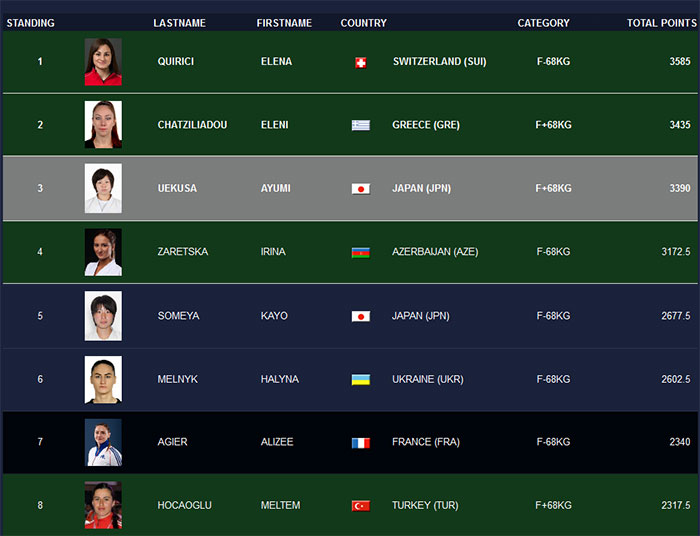 Meanwhile, Serap Ozcelik of Turkey increases her distance with second-placed Tzu-Yun Wen of Chinese Taipei in Female Kumite -55kg after her victory in Rabat. World champion Miho Miyahara takes the place for Japanese quota while Anzhelika Terliuga of Ukraine is fourth after winning gold at the Karate 1-Premier League Rabat. Bronze medallist in Rabat Bettina Plank of Austria is placed in the last of the qualifying spots with World champion Dorota Banaszczyk of Poland in fifth place but out of the qualifying ticket due to the merging of categories. 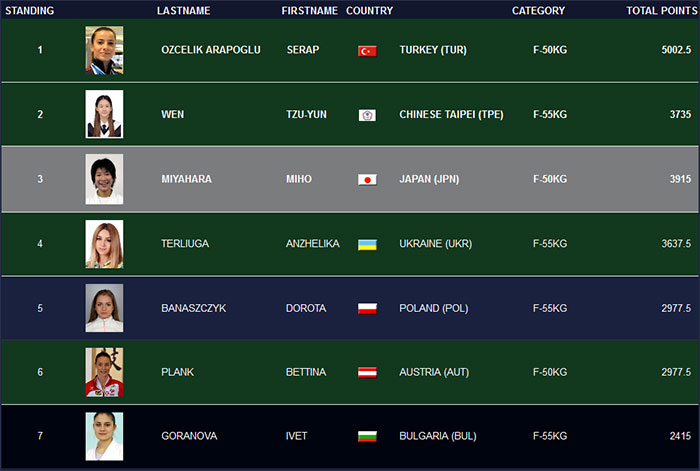 In Female Kata, Sandra Sanchez of Spain and Kiyou Shimizu of Japan grow the distance on top of the Female Kata category. The World champion from Spain remains on top even though the victory in the Karate 1-Premier League Rabat was for Shimizu. No less than 1,612.5‬ points separate Shimizu from third-placed Viviana Bottaro of Italy as Mo Sheung Grace Lau of Hong Kong and Sakura Kokumai of the USA take the rest of the qualifying positions. Maria Dimitrova of the Dominican Republic stays in sixth place at just 97.5 points. 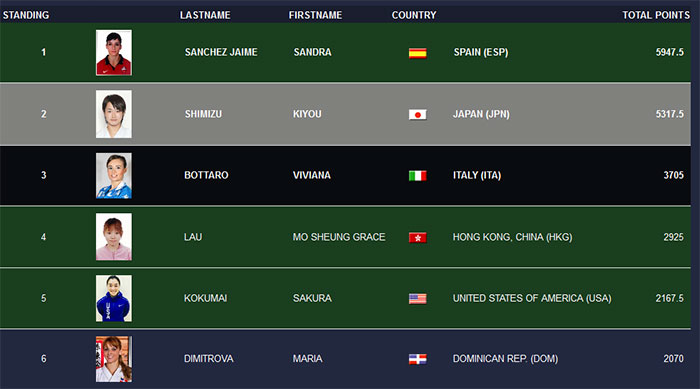 The top four athletes in each category at the end of the qualifying process will earn the direct ticket to participate in the Olympic Games Tokyo 2020. Japanese representatives will have one quota place in each category, going to the top-ranked athlete of the host country. In the categories that are merged (Male Kumite -67kg, Male Kumite +75kg, Female Kumite -55kg and Female Kumite +61kg), two of the qualifying spots will go to each one of the merged categories.

To learn more about the qualifying process for Tokyo 2020, CLICK HERE.