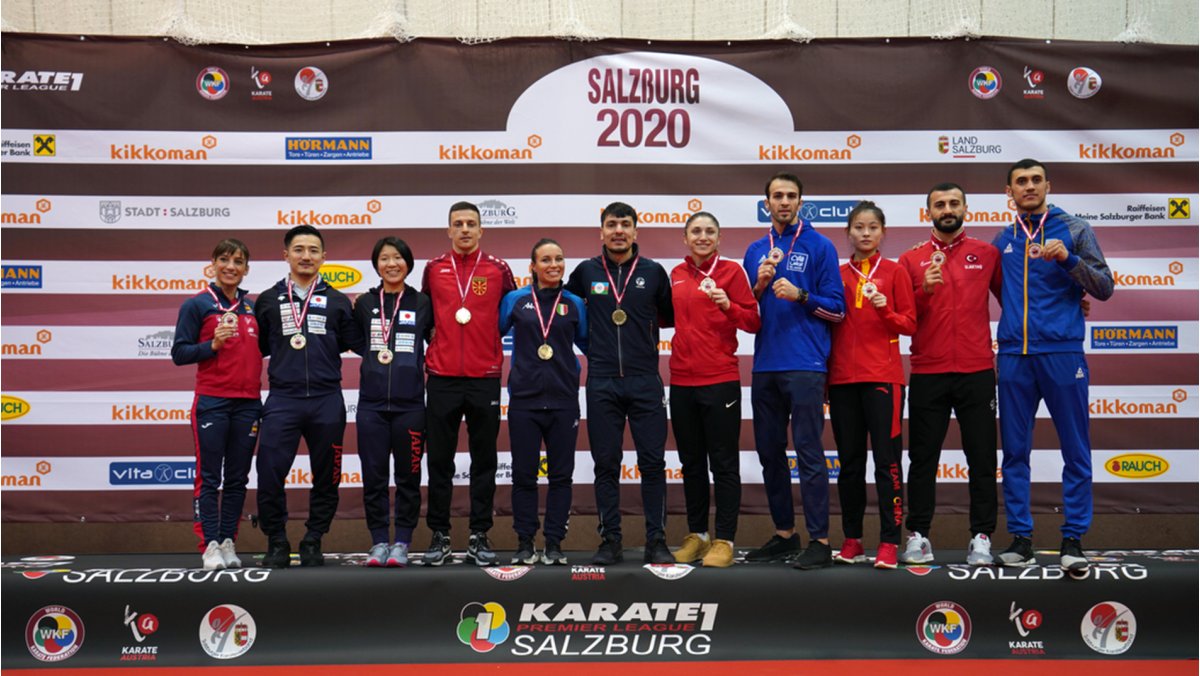 Up-and-coming Karate Stars were the big winners of the Karate 1-Premier League Salzburg. The third stop of the season of Karate’s first-class international events finished in Salzburg (Austria) with Sandra Sanchez, Kazumasa Moto, Sara Cardin, Ugur Aktas and Bahman Asgari Ghoncheh among the heroes of the tournament.

Up-and-coming Karate Stars were the big winners of the Karate 1-Premier League Salzburg. The third stop of the season of Karate’s first-class international events finished in Salzburg (Austria) with Sandra Sanchez, Kazumasa Moto, Sara Cardin, Ugur Aktas and Bahman Asgari Ghoncheh among the heroes of the tournament.

Spain’s Sandra Sanchez demonstrated outstanding domination of the Female Kata category and claimed her third medal in three events this year. The current Grand Winner defeated Sakura Kokumai of the USA in the final thus repeating the result of the Karate 1-Premier League in Dubai. Sanchez excelled with “Chatanyara Kushanku” kata and received a score of 27.38 for 25.4 for Kokumai.

Sandra Sanchez said: “I feel very proud of this gold medal because it is the recognition for the work that (coach) Jesus del Moral has been doing, sometimes in the shadows. He deserves all the credit for all the success. With this tournament, we close a period that comprised of the first big three tournaments, Paris, Dubai and Salzburg. We had the chance to fine-tune details in kata and now we focus on our next big goal, the European Championships.” 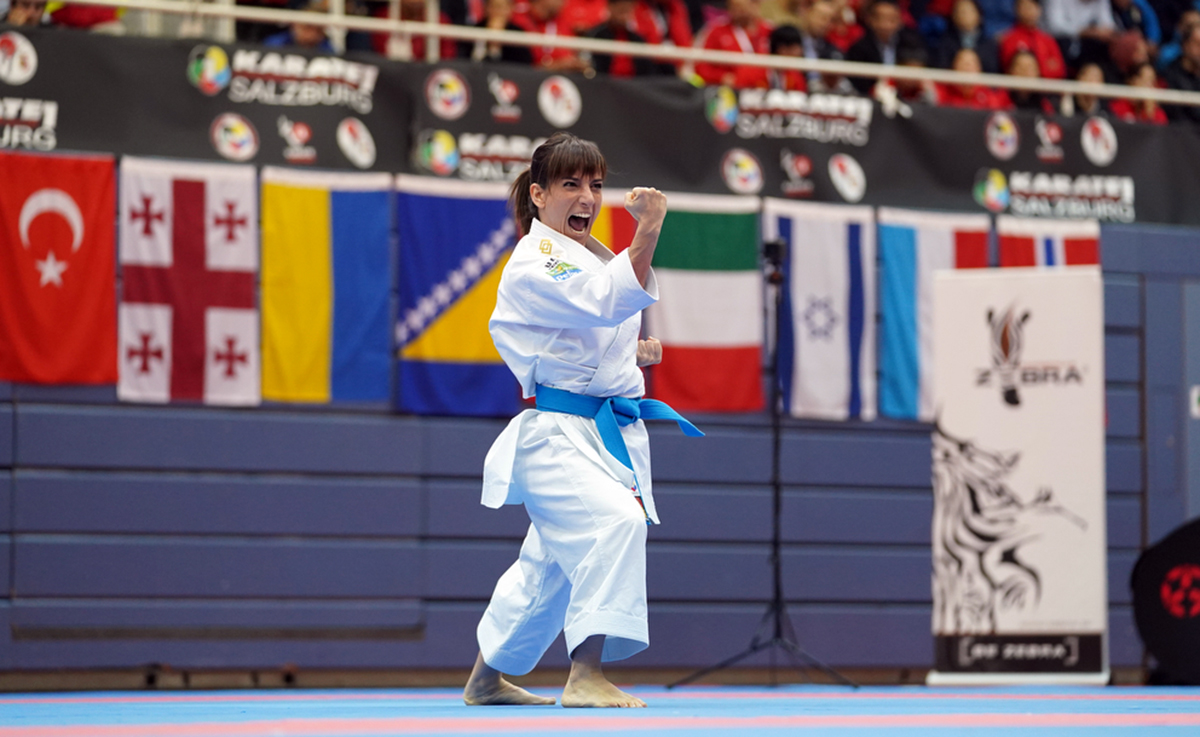 Turkey’s Ugur Aktas became one of the two Grand Winners reaching the top of the podium today. The final of Male Kumite -84kg was set to be a clash of titans with Grand Winner Ugur Aktas facing World champion Ivan Kvesic of Croatia. However, the clash could not happen as Kvesic retired due to an injury. 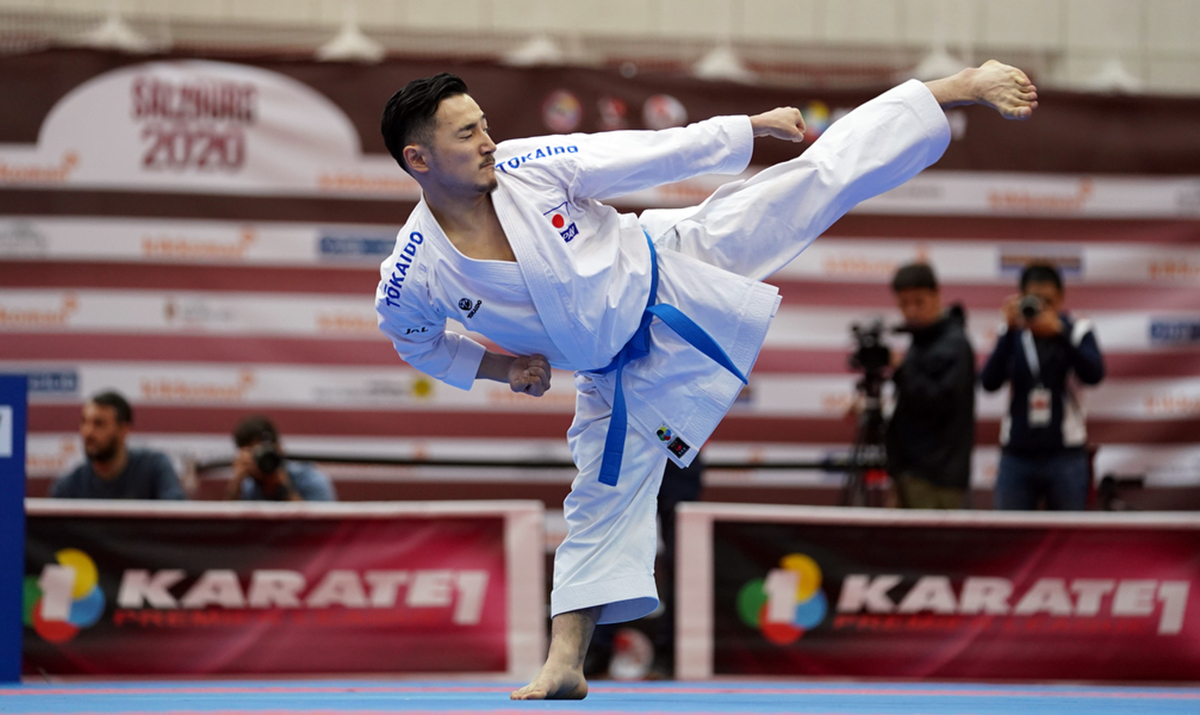 The final of Male Kata had two upcoming karatekas fighting for gold. The title went to Kazumasa Moto of Japan who claimed his first Karate 1-Premier League crown. The 24-year-old Japanese karateka had five gold medals in Karate 1-Series A events as best results including the title in Salzburg last year but had not managed to prevail in Karate 1-Premier League events thus far. Moto performed a flawless “Gankaku” kata and got a score of 27.48. His rival in the final Ali Sofuoglu of Turkey received a score of 26.46.

Kazumasa Moto said: “It is my first gold in Karate 1-Premier League so I am very happy. Today I concentrated on my kata to show everyone my best possible performance.”

Miho Miyahara said: “I am so happy! Winning today was very good but what I really want is to win my ticket to the Olympic Games!” 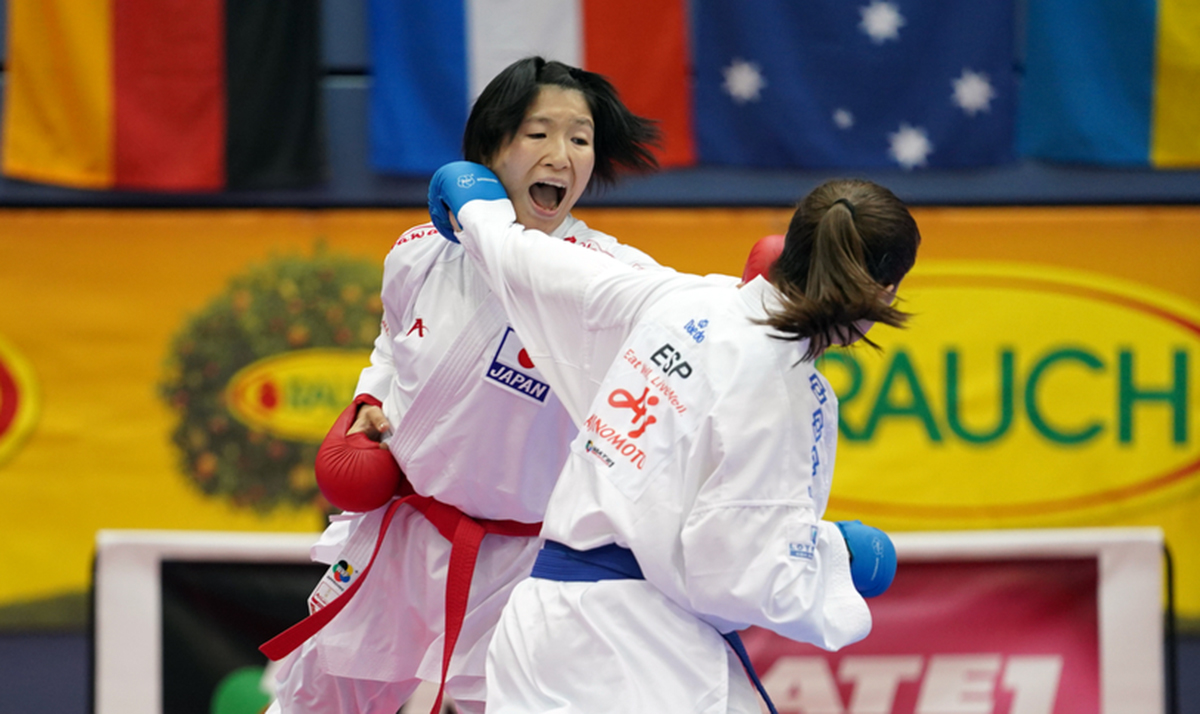 Bahman Asgari Ghoncheh of Iran became the third World title-holder succeeding today in Salzburg together with Sandra Sanchez and Miho Miyahara. The current World champion in Male Kumite -75kg defeated Stanislav Horuna of Ukraine in a thrilling bout. The clash went scoreless until the last seconds of the match. With only 9 seconds to go, Bahman Asgari Ghoncheh claimed an “Ippon” that gave the Iranian representative his third gold this year after his titles in Paris and Santiago.

In an electric bout, Emil Pavlov of North Macedonia upset World champion Angelo Crescenzo of Italy to win the gold medal in Male Kumite -60kg. The final match went tied to the last minute of the clash as the two competitors had scored two “Yuko” each. Crescenzo then took a clear lead with a “Waza-ari”. When the title appeared to go to the Italian ace, Emil Pavlov connected an impressive “Ippon” with only a few seconds to the end of the bout. Pavlov won the match and the title 5-4. It is the first crown for Pavlov after his victory at the Karate 1-Premier League Moscow last year. 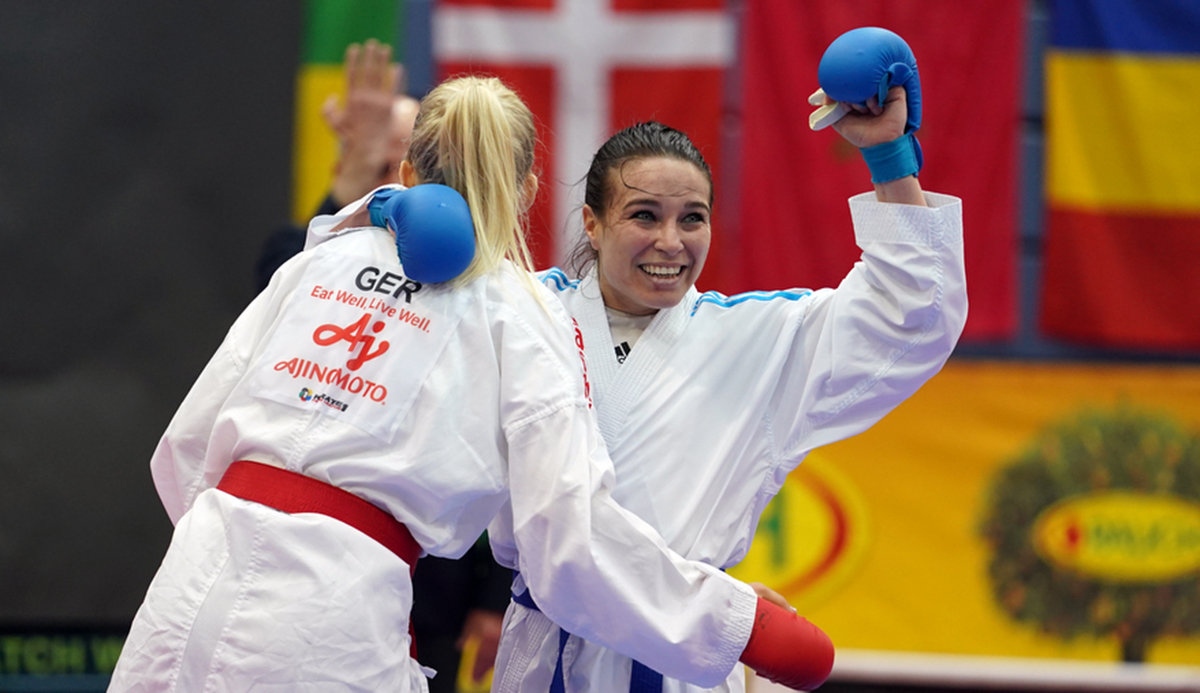 It was one of the highlights of the day. Two competitors who had been away from the top of the podium in the last events clashed for gold in a tight final of Female Kumite -55kg. Sara Cardin of Italy won her first title of Karate 1-Premier League in nearly two years after edging Jana Messerschmidt of Germany 3-2. The two competitors exchanged early “Yuko” but one final “Yuko” by former World champion Cardin gave the Italian fan favourite the bout and the gold medal.

China’s Li Gong won her second consecutive title in Karate 1-Premier League following her victory in Dubai two weeks ago. The Chinese representative defeated Feryal Abdelaziz of Egypt 3-1 in the final of Female Kumite -68kg. An “Ippon” is all that Li Gong needed to take the title in Salzburg. Abdelaziz tried to come-back and scored a late “Yuko” but Li Gong confirmed the victory in the bout and her second gold medal in Karate 1-Premier League events. 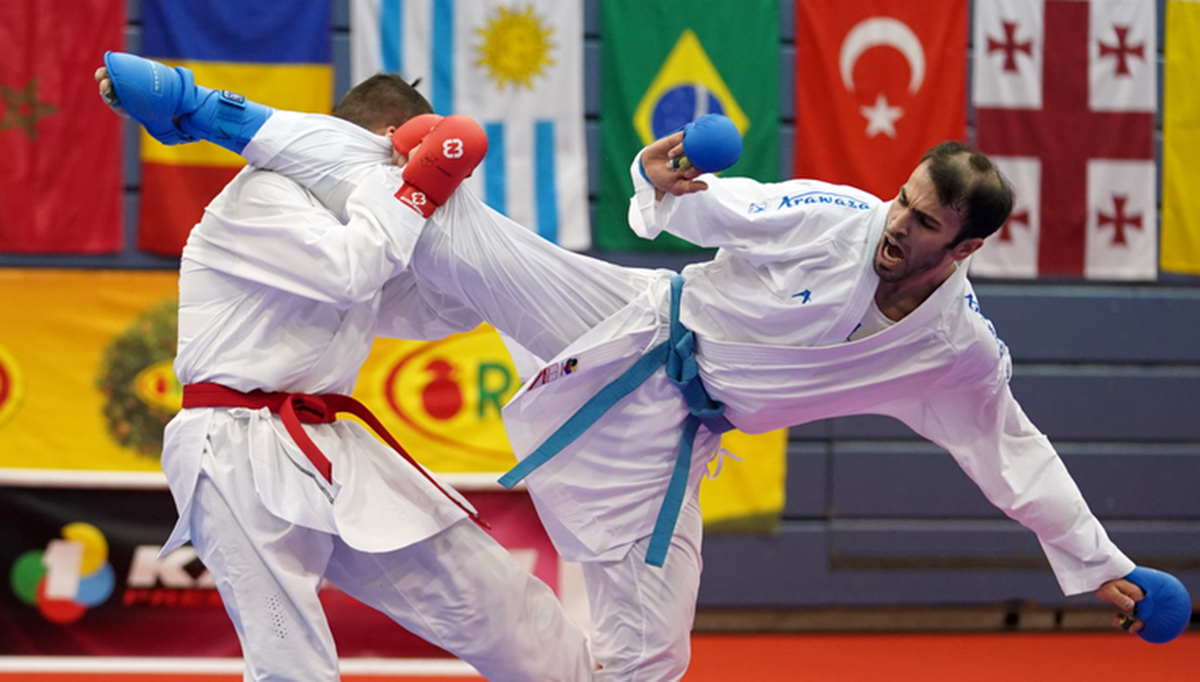 (Iranian karatekas performed at a great level in Salzburg)

Iranian representatives added one more title to their tally of awards today with Hamideh Abbasali’s victory in Female Kumite +68kg. The Iranian karateka achieved a hard-fought victory over Clio Ferracuti 2-1. Ferracuti had scored an early “Yuko” but Abbasali claimed a “Waza-ari” to take the bout. It is the second title this year for Abbasali who had won gold in Paris.

In the rest of the bouts, Rafiz Hasanov of Azerbaijan defeated Luca Maresca of Italy 3-1 in the final of Male Kumite -67kg. Merve Coban of Turkey edged Haya Jumaa of Canada by “Hantei” or decision (0-0) in Female Kumite -61kg, as Ryzvan Talibov of Ukraine beat Brian Irr of the USA 3-1 in Male Kumite +84kg to claim his first-ever title in international competitions. Spain and Turkey took the crowns in Team Kata.

(All the medallists of Karate 1-Premier League Salzburg)

The Karate 1-Premier League moves now to Rabat (Morocco) where the fourth stage of the event will be held from March 13 to 15.

CLICK HERE to go to all the info on the Karate 1-Premier League Salzburg including results.