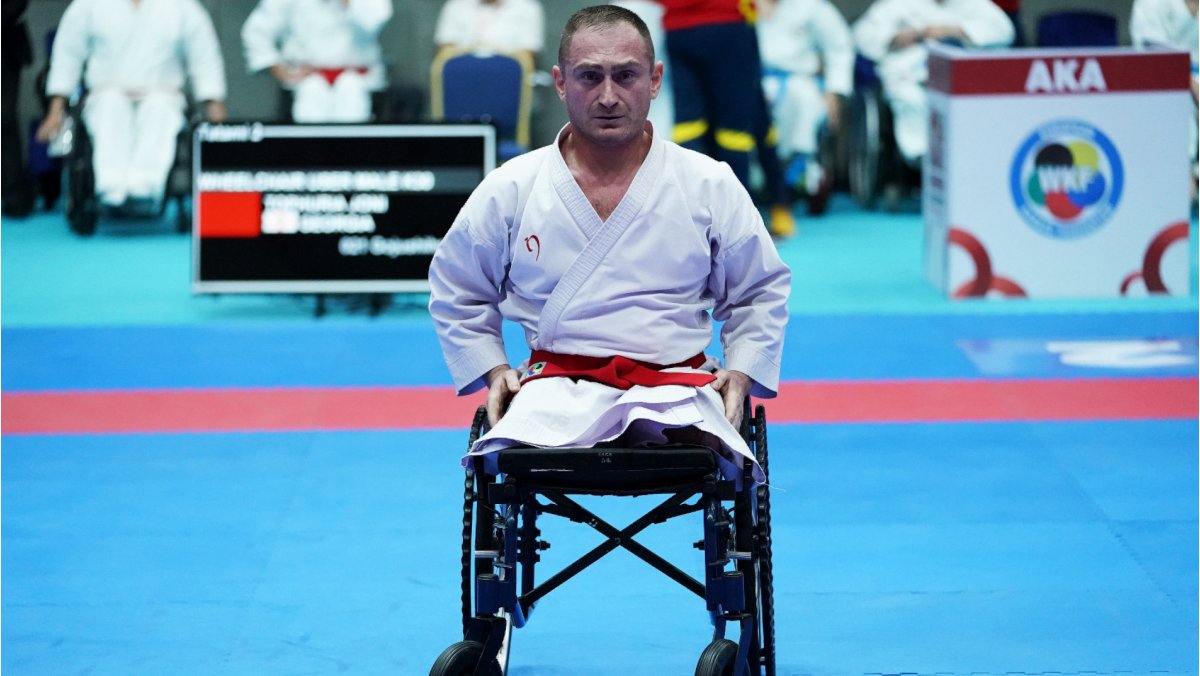 The third day of the competition at the 2022 European Karate Championships put Para-Karate in the spotlight. Para-Karate athletes such as Joni Tophuria demonstrated the many values of the sport and showcased the enthusing effects of Karate on people with disabilities.

Joni Tophuria of Georgia has always been a man of action. In 2012, while in the military, he was sent on a mission to Afghanistan. The explosion of a mine changed his life forever.  As a result of the detonation, Tophuria lost both lower limbs and was confined to a wheelchair.

Despite the daunting event that almost cost him his life, Tophuria showed tremendous strength of will and did not allow this situation to keep him from doing what he loved most: sports. 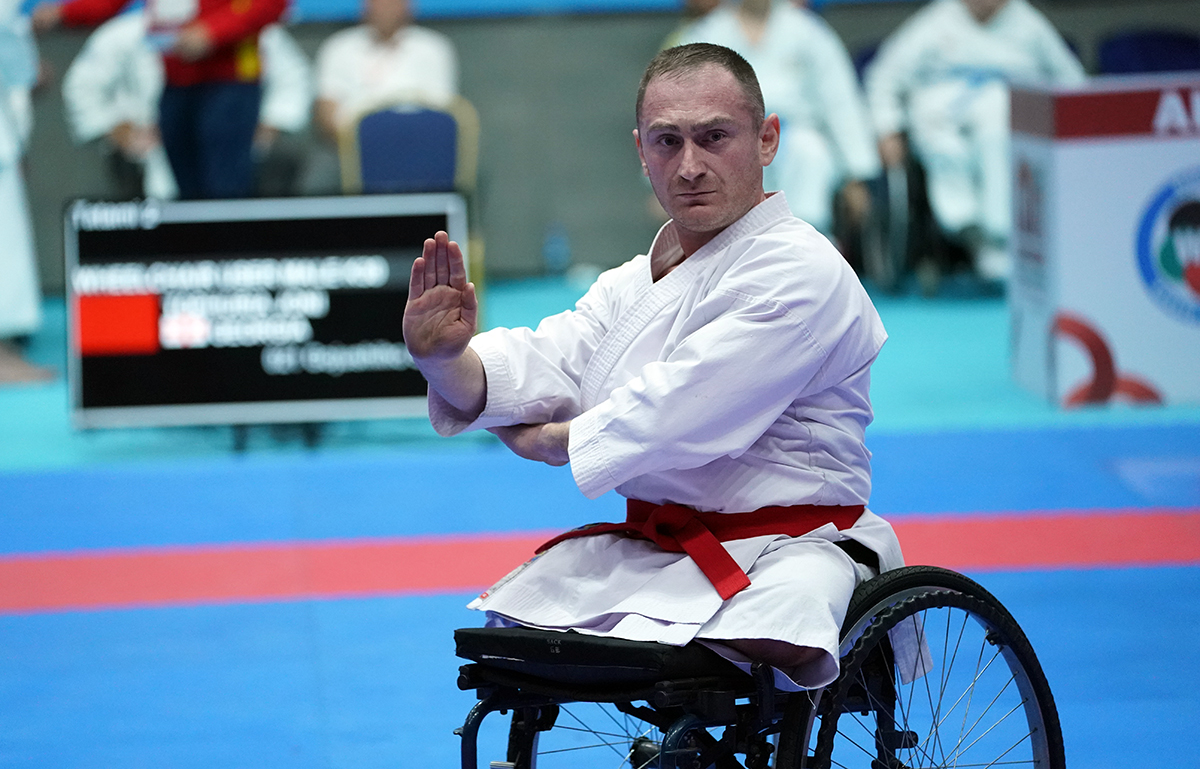 Only five years after the explosion, Tophuria became a national champion and European titleholder in para-rowing. He also tried wheelchair basketball, with impressive results, as he took first place as a member of the US Marines team.

Demonstrating an outstanding physical condition, he also practiced hand-cycling, a discipline in which he became a national champion and record-holder in the 10 Mile-dash.

His experience in Karate started in 2019. Driven by the many values of Karate, he practiced Karate to expand his versatile approach to sports. Tophuria embodied all the ideals of the sport and soon started succeeding in Para-Karate. He is a two-time national champion, winner of the Slovak Grand Prix, and has represented his country at the World and continental stages. 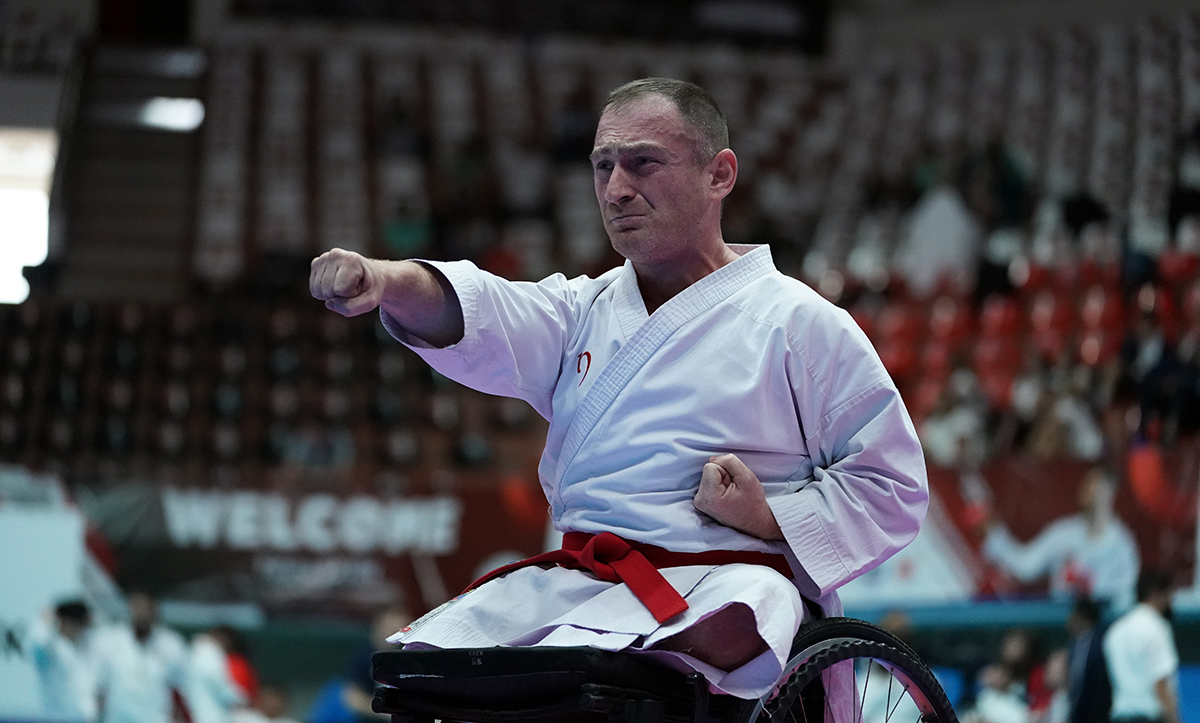 In Gaziantep, he demonstrated his power in the Wheelchair User Male K30 competition. In the first round, he received a score of 39.30, so to finish in the second position in the pool, after Vicente Yanguez of Spain.

Qualified for the bronze medal match, he faced Sven Baum of Germany. In the bout for bronze, Tophuria took a score of 40.38 for 37.22 for Baum thus earning his first continental medal.

Newly-proclaimed bronze medallist, Joni Tophuria demonstrated that with Karate, when there’s a strong will, there’s always a way to success.