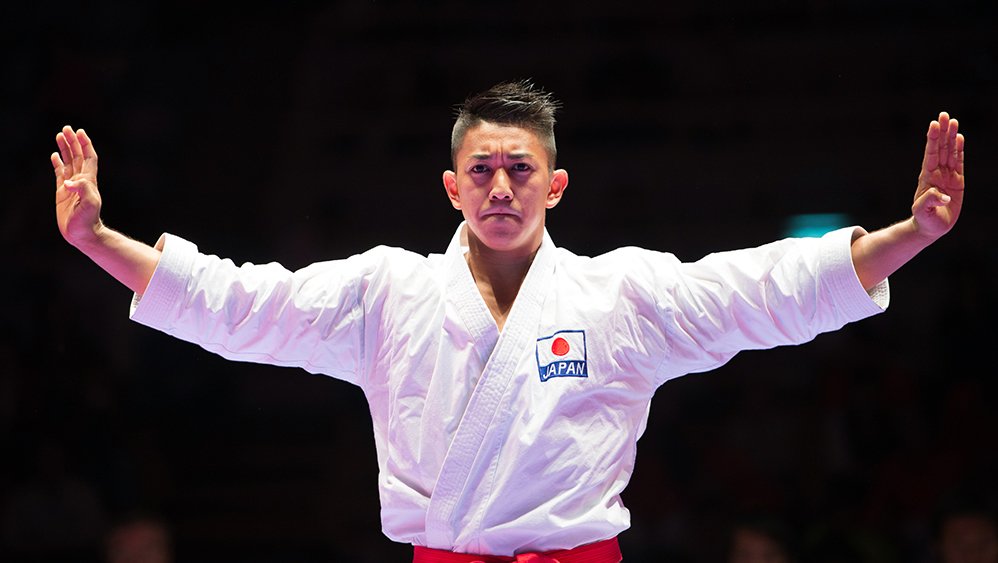 The Karate 1-Premier League Tokyo will be the last opportunity of the season to showcase the best karatekas in the world in Karate’s first-class series of international competitions. With the year of Karate 1-Premier League coming to an end in Tokyo this weekend, fan favourites aim to finish the season with the coveted Triple Crown; for the moment, only Japan’s Ayumi Uekusa and Ryo Kiyuna have managed to take three titles this season. Other 11 top karatekas hope to reach the sought-after recognition.

The Karate 1-Premier League Tokyo will be the last opportunity of the season for the best karatekas in the world to be showcased in Karate’s first-class series of international competitions. With the year of Karate 1-Premier League coming to an end in Tokyo this weekend, fan favourites aim to finish the season with the coveted Triple Crown; for the moment, only Japan’s Ayumi Uekusa and Ryo Kiyuna have managed to take three titles this season. Other 11 top karatekas hope to reach the sought-after recognition.

After her impressive demonstrations of efficiency this year, Japan’s Ayumi Uekusa has stated her top form by claiming three crowns in Karate 1-Premier League this year. With her victories in Dubai, Rotterdam, and in Berlin barely one month ago, the current Grand Winner in the category of Female Kumite +68kg is showcasing exceptional level. This weekend, competing at home in Tokyo, the Japanese star will try to wrap up one of the best performance in the event in last years.

Also from Japan and also hoping to take the home-ground factor in his favour, Ryo Kiyuna is together with Ayumi Ueksa the only competitor with three crowns this season. Following his victories in Paris, Istanbul and Berlin, the two-time World champion is the top favourite to break the impressive record of three golds in Karate 1-Premier League in the same year. 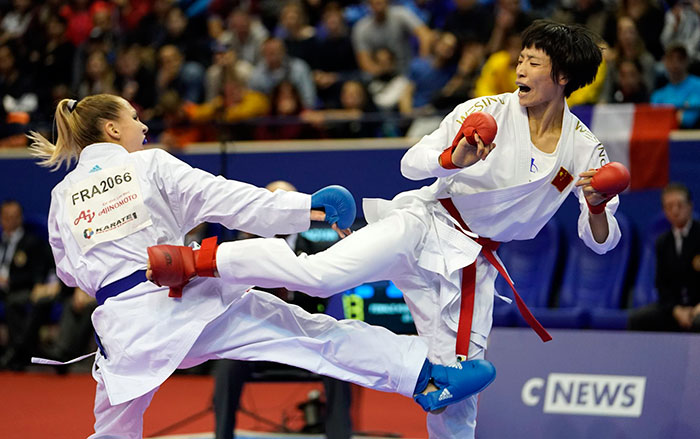 In Female Kata, the competition will be fierce since two of the best Kata karatekas of all times will clash for the Triple Crown. With the Grand Winners award of the category already in Sandra Sanchez’s hands, now the big question is who will claim three gold medals this year. Both Sandra Sanchez of Spain and Kiyou Shimizu of Japan have taken two titles respectively, and are front-runners of a category which also has Viviana Bottaro of Italy and Mo Sheung Grace Lau of Hong Kong as gold medallist this season.

Meanwhile, the defending Grand Winner is also taking the spotlight in Female Kumite -61kg. In addition to heading the WKF World Ranking, China’s Xiaoyan Yin also appears as a candidate to win three Karate 1-Premier League this year. The Chinese favourite who prevailed in Paris and Dubai hopes to take the gold medal so to maintain the Grand Winners status. 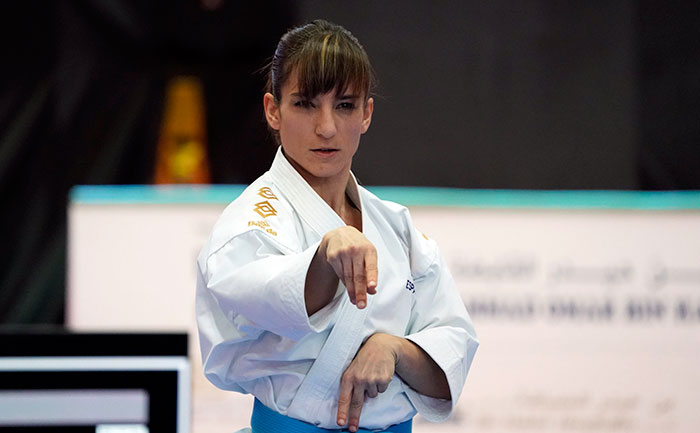 The list of current Grand Winners with two titles this year is completed with Iran’s Sajed Ganjzadeh. The defending world champion has taken two golds this season, in Paris and Berlin, and aims at extending his impressive tally of awards in Tokyo.

In addition to Ryo Kiyuna, Ayumi Uekusa and Kiyou Shimizu, Japan also have representation of the quest to the Triple Crown in Female Kumite -50kg. Local athlete Miho Miyahara has become one of the biggest rising stars of the season with two titles, in Paris and Rabat. In the race to the third golf, the promising Japanese karateka will clash against experienced and current Grand Winner Serap Ozcelik. The mighty Turkish karateka has also prevailed twice this year, in Berlin and Dubai, and is also in line to renovate the Grand Winner award. 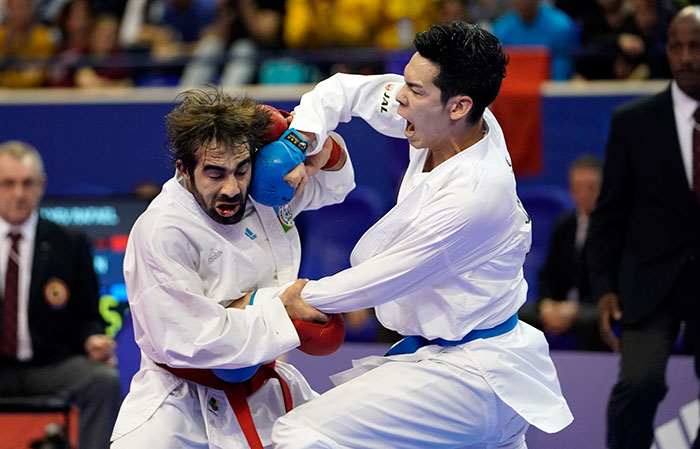 One of the biggest surprises of the year, Japan’s Ken Nishimura is also contending for the Triple Crown. The young Japanese karateka has been featured in one of the most thrilling showdowns of the season, his face-off with Karate superstar Rafael Aghayev. With two crowns also under his belt, and with the Grand Winners award already secured, the five-time World champion from Azerbaijan will fight against Ken Nishimura – among other top competitors in the disputed Male Kumite -75kg– for the control of the category.

Powerhouse nation of France will also have representation in the thrilling quest to the Triple Crown. French top karateka  Alizee Agier hopes to complete a remarkable season following her victories in Paris and Dubai. After an uncertain second half of the season, the former World champion is one of the front-runners of Female Kumite -68kg and also a candidate to the Grand Winners award.

One of the top competitors this year, Sara Cardin also appears as one of the karatekas aiming for the third title this year. The successful Italian athlete took the crowns in Dubai and Istanbul and hopes to close the season in style in Tokyo with yet another victory.

Eray Samdan of Turkey in Male Kumite -60kg completes the list of karatekas who can finish the Karate 1-Premier League Tokyo with three gold medals in the biggest international series of events of the sport.

The last day of the event will be broadcast to a number of TV Networks around the world and will be streamed LIVE on WKF’s online platform, karateworld.tv. 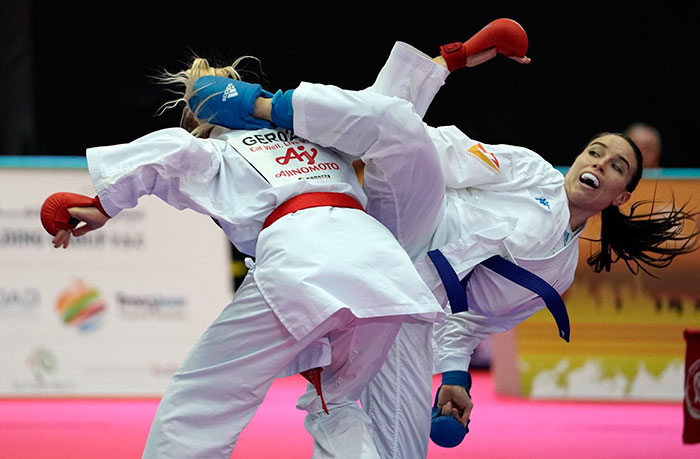