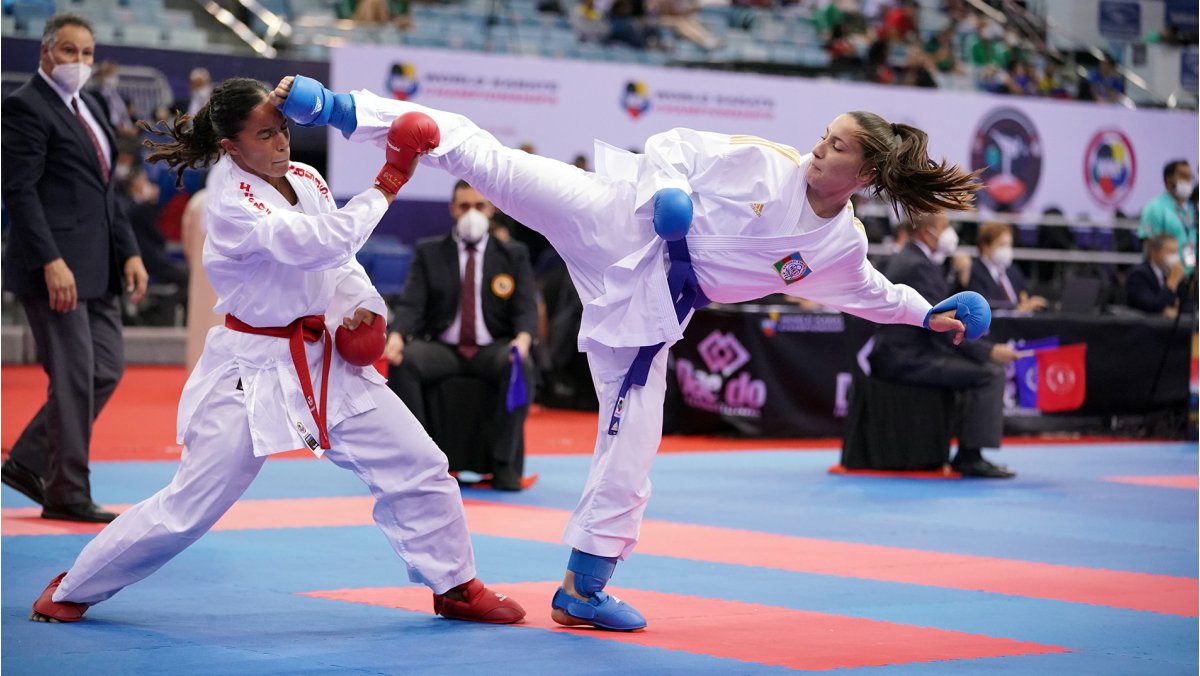 Defending World champion Irina Zaretska of Azerbaijan became the big star of the day as she qualified to fight for her second consecutive world crown. Many surprises took over the competition in the thrilling first day of action.

Azerbaijan’s Irina Zaretska was one of the #KarateWorldChamps succeeding today as she produced a fantastic performance to defend her World crown in Female Kumite -68kg.

“I came to the tatami today and did the best that I could. I tried to enjoy myself and show the best Karate that I had.

“For the past four years all I had in my mind was the Olympics. But the Olympic Games are in the past; I won the silver medal there, but now I think on what’s to come”.

Her rival in the title-deciding bout is Silvia Semeraro of Italy. The Olympian and two-time continental championships medallist beat Melissa Bratic of Canada (1-0) in the semi-finals to be in her first World Championships final.

“WHAT MATTERS IS YOUR HEART”

One of the most veteran karatekas of the international scene, 37-year-old Gogita Arkania starred in the come-back of the tournament since he went back to the final of the World Championships seven years after winning the World title in 2014.

The Georgian karateka, who also represented the sport in the Olympic Games, qualified for his third medal in World Championships (he also won bronze in Tokyo 2008) after beating Andjelo Kvesic of Croatia (3-1) in the semi-finals. 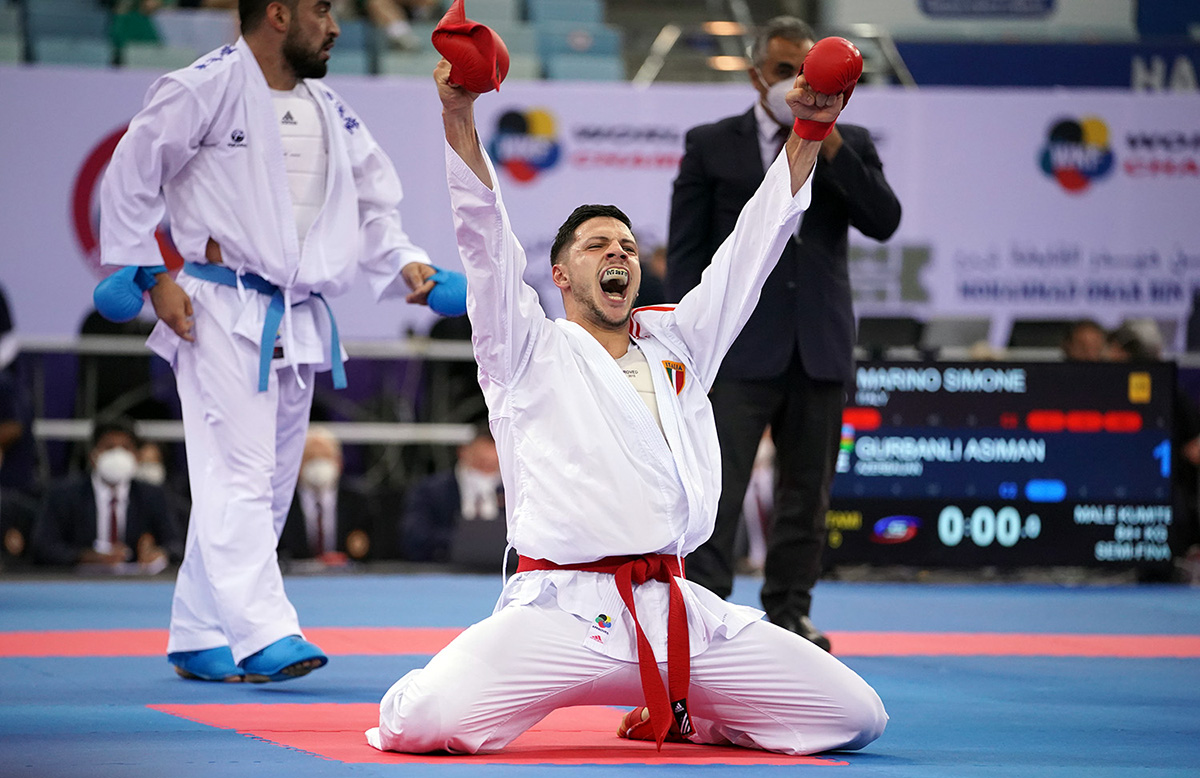 “It is an amazing feeling; it is really great that I could qualify for the final again”

“After the Olympic Games I was not in shape, but my team worked hard with me to keep me back on track and for that, I am extremely grateful. I was more motivated than ever. Now, as well as in the Olympics, I have demonstrated that age is only a number. What matters is your heart”.

Meanwhile, Simone Marino opened the medal count for Italy today and qualified for his first World Championships final. Italy’s Marino is the perfect antagonist to his rival on Saturday’s final as with 24-years-old, he has only two appearances at World Championships and just two medals in international competitions under his belt.

“I did not expect to reach the final like this, but I did it and I have my coach to thank for all the efforts and for the success that it is that I am here.”

Spain’s Maria Torres and Egypt’s Menna Shaaban Okila will clash to be the new World champions in Female Kumite +68kg. A first time for both karatekas, the two Karate athletes surprised favourites to reach the final stages of the category.

The Spanish karateka overcame the disappointment of barely missing the ticket to the Olympic Games at the Olympic qualification tournament and made it to improve her two bronze medals at underage World Championships. 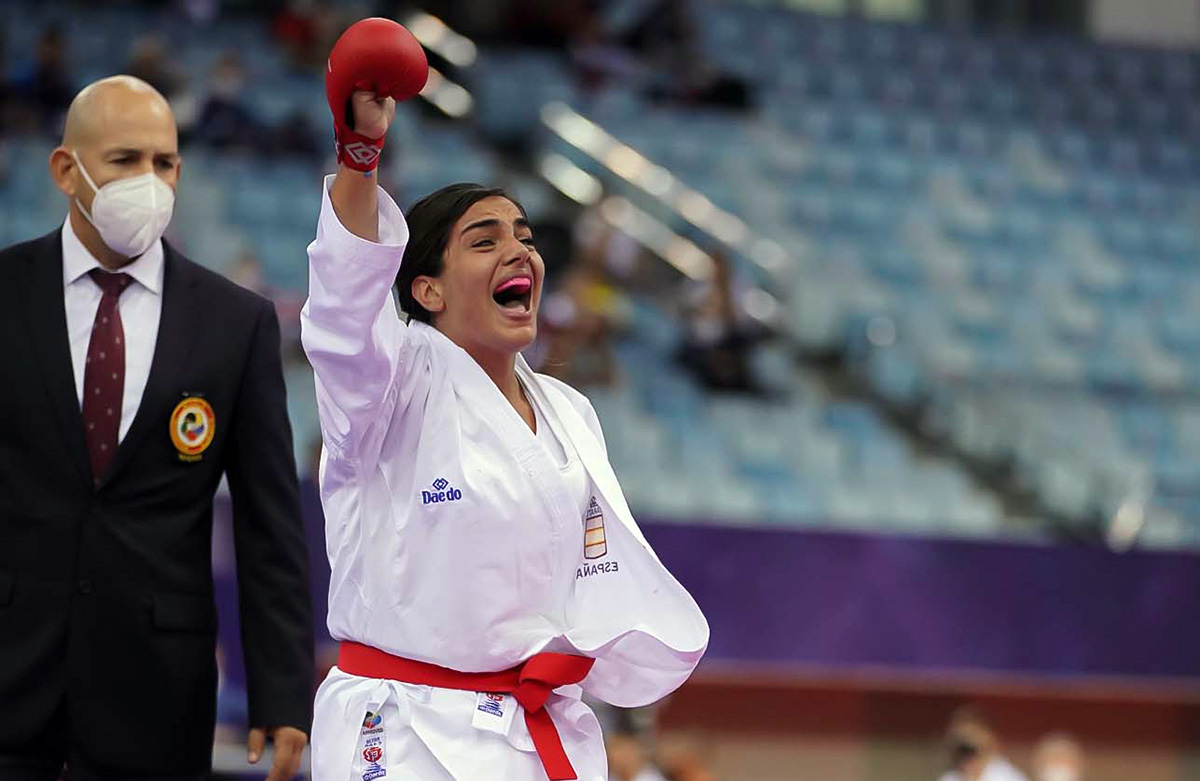 “I fought with all my heart, with all my body, and when you do that, sometimes you win, and sometimes you lose. This is Karate, but today, I got to win. I feel especially happy because it’s been a hard year for me after losing in the Olympic Qualification tournament. I still cannot believe it that I am in the final!”

Also a first-time World Championships finalist, Menna Shaaban Okila of Egypt edged Croatia’s Lucija Lesjak of Croatia 2-1 in the semi-finals. It is the chance for the Egyptian karateka to win her first gold medal as she has five bronze medals in international events as her best results.

#KarateWorldChamp Eleni Chatziliadou of Greece suffered an early defeat against Brenda Pereira Padilha of Brazil (3-1) and was unable to fight to recover her world title.

After their successful performance at the Olympic Games, the Powerhouse nation of Egypt continues adding honours to their tally of awards as they took another qualification to the finals with Youssef Badawy’s impressive appearance in Male Kumite -84kg.

The Egyptian karateka who is the current U21 World Championships bronze medallist surprised favourites and made it to the final after upsetting France’s Jessie Da Costa (2-2).

The surprising outcome of the category was completed by Fabian Huaiquiman of Chile. In his first World Championships appearance, the Chilean athlete qualified for his first final in senior categories after edging Nabil Ech-Chaabi of Morocco (5-5).

Defending title-holder Ivan Kvesic of Croatia is set to fight for the bronze medal as he qualified for the repechage since he was defeated by finalist Badawy in the first round (5-4).

Egypt also succeeded in Male Kumite -75kg as the representative of the African nation Abdalla Mamduh Abdelaziz qualified for the final.

The current UFAK champion defeated Quentin Mahauden of Belgium in the semi-finals 3-0 and will fight for his first World Championships medal.

Also a first-time medallist in World Championships, Dastonbek Otabolaev of Uzbekistan aims at his second gold medal in international events following a slim 1-0 victory over Olympian Thomas Scott of the USA.

The competition continues Wednesday with the rest of the individual categories.

CLICK HERE to go to all the info of #KarateDubai2021.