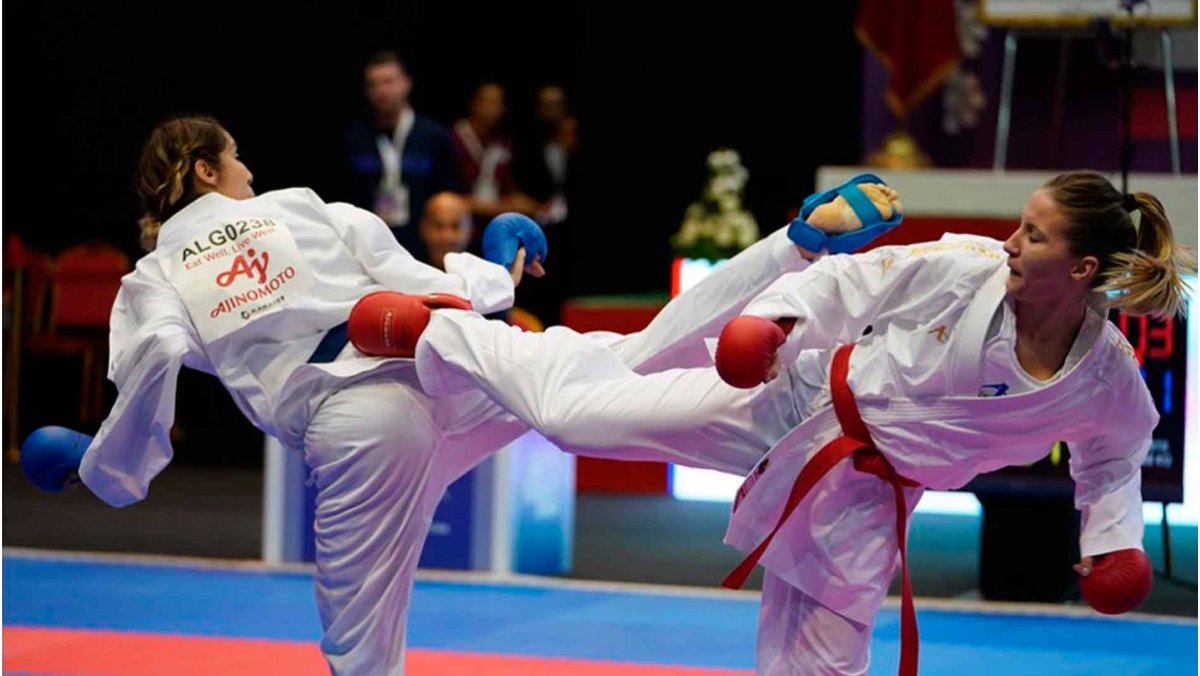 Grand Winner Xiaoyan Yin aims at winning the Triple Crown in Karate 1-Premier League after reaching the final of the event being held this weekend in Rabat (Morocco). The Chinese karateka was one of the athletes shining in day 2 of Karate action in Rabat with heroes such as Iryna Zaretska and Jonathan Horne also easing into the finals of the fourth stop of the season of Karate 1-Premier League.

Grand Winner Xiaoyan Yin aims at winning the Triple Crown in Karate 1-Premier League after reaching the final of the event being held this weekend in Rabat (Morocco). The Chinese karateka was one of the athletes shining in day 2 of Karate action in Rabat with heroes such as Iryna Zaretska and Jonathan Horne also easing into the finals of the fourth stop of the season of Karate 1-Premier League.

The spotlight on the second day of competition in Rabat was captured by China’s Xiaoyan Yin who presented an impressive demonstration of offensive Karate. The 24-year-old karateka dominated the pool with a tally of 11-3 in three bouts; then, in one of the highlights of the day, Xiaoyan Yin defeated promising French karateka Gwendoline Phillipe in semi-finals. The Chinese ace won the semi-final bout by ‘senshu’, or first unopposed point advantage (2-2) so to compete for her third victory in 2018 Karate 1-Premier League.

“I am very glad that I can be in another final. My goal is to be number one this year,” said the Chinese star who despite getting two golds in Karate 1-Premier League this season and three medals last year prefers to stay grounded.

“I think that there are many other competitors that are better than me. I just want to continue working to keep my good form. On Sunday, I will give my best to try to win the final”, added the current Asian champion. 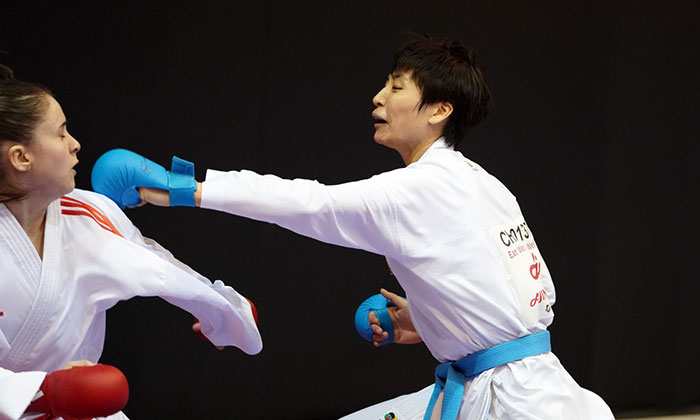 Following Yiaoyan Yin’s success, another Grand Winner in contention presented an impressive display of effective Karate. Iryna Zaretska of Azerbaijan qualified for the final of Female Kumite -68kg in her first appearance of the season thus producing a remarkable debut. The Grand Winner representing Azerbaijan defeated Lamya Matoub of France in semi-finals (3-1).

“It was my first appearance this year so for me, it was very special to compete here in Rabat. When you are Grand Winner, you have a special karate-gi with golden embroidery, you receive a lot of attention and you have a certain status to maintain. This is very important to me so I am very happy that I could start the season like this,” said Zaretska.

“I hope that I will be able to compete in the rest of the events this year. I am still in time to be Grand Winner again, this is my big goal. I also have the European Championships and the World Championships to think of,” added the current Grand Winner. 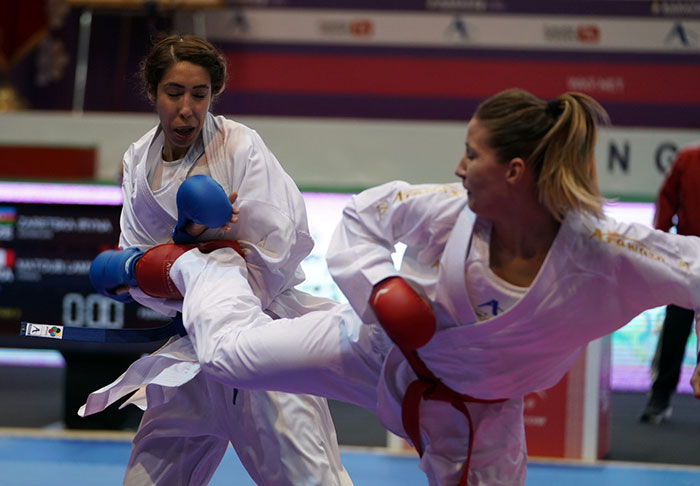 Iryna Zaretska will clash for gold against Denmark’s Katrine Pedersen. The Danish World Championships runner-up also presented a firm performance and qualified for her second final of the year. The Karate 1-Series A Guadalajara silver medallist beat Miroslava Kopunova in semi-finals (2-0) and will fight for her first medal in Karate 1-Premier League in nearly two years.

Spain continued its outstanding performance in kata categories and celebrated the qualification of promising karateka Sergio Galan for the final of Male Kata. The 22-year-old karateka shocked with his excellent demonstration of kata abilities and defeated Hong Kong’s Chi Ming Lau by unanimous decision to reach his first final in senior competitions.

“I knew that this tournament could be a good opportunity for me. I am so glad that I could reach the final. I have had very difficult opponents today but I went kata by kata, trying to give my best in every bout,” said Sergio Galan. 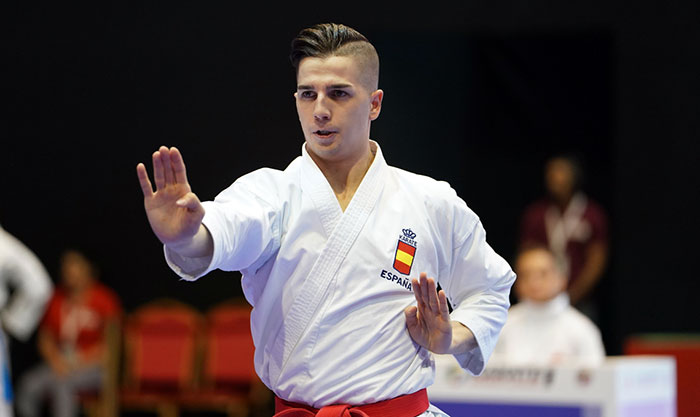 “The only secret (of Spain’s success in Kata) is hard work. Our head coach is doing a great job and we work very hard. What you see on the tatami is the result of our work and dedication,” said the promising Spanish karateka reflecting on Spain taking their ninth medal in Kata competition at the 2018 Karate 1-Premier League.

The final of Male Kata will be a clash of Kata powerhouses since Sergio Galan will meet Turkey’s Ali Sofuoglu in the bout for the gold medal. The European Championships runner-up from Turkey defeated teammate Mehmet Yakan in semi-finals by unanimous decision and will try to extend the count of five medals in Kata categories of the Turkish representatives in Karate 1-Premier League this year.

The German delegation also finished the day on a high note since Jonathan Horne qualified for the final of Male Kumite +84kg. The World Ranking leader upset Turkey’s Ridvan Kaptan 2-0 in semi-finals and will clash for his second gold this year. The 2015 European champion took the top of the podium in Rotterdam barely one month ago and earned bronze in Paris.

“I felt very good today. I did all that I had planned for my bouts and I feel great for reaching the final,” said Horne.

“I want to get the gold medal at the World Championships, this is the only medal I miss in my collection, and this year I will do anything on my hands to prepare for it,” added the German karateka.

The other belt in the final will be worn by Mehdi Filali of France. The French young karateka beat Asiman Gurbanli of Azerbaijan to qualify for his first final this year. 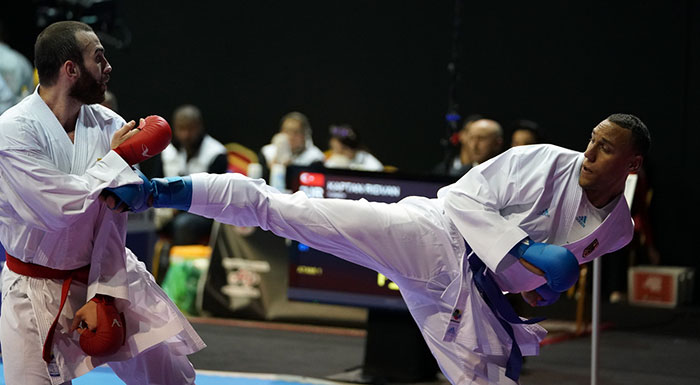 Just as it happened in Male Kumite -67kg, the final of Male Kumite -84kg will be an all-Egypt confrontation thus stating the traditional successful performance of Egyptian karatekas in the event. Mohamed Elkotby will fight for gold against Ahmed Elmasry. It will be the third final for Elmasry this year who is fast becoming one of the karatekas on top form this season. It will be the first final in two international appearances for Elkotby.

Meanwhile, the Female Kumite +68kg will see a Finland versus Spain confrontation. Titta Keinanen edged Eleni Xatziliadou of Greece in semi-finals and reached the last day of competition by Hantei or "Winner by decision". Spain’s Laura Palacio took the other spot in the final after defeating Sweden’s Hana Antunovic by 2-1. The bout between the Spaniard and Finnish karatekas will be a repetition of the final of the Karate 1-Series A Guadalajara. The victory in the event being held in the Spanish city went to Laura Palacio’s hands.

The competition will conclude on Sunday with all the finals.  The final day of action of the Karate 1-Premier League Rabat will be broadcast to a worldwide viewing audience on many TV Networks around the world and on KARATEWORLD.TV.

For a full list of TV Networks and countries CLICK HERE and select your country to see where you can watch the Karate 1-Premier League Rabat.