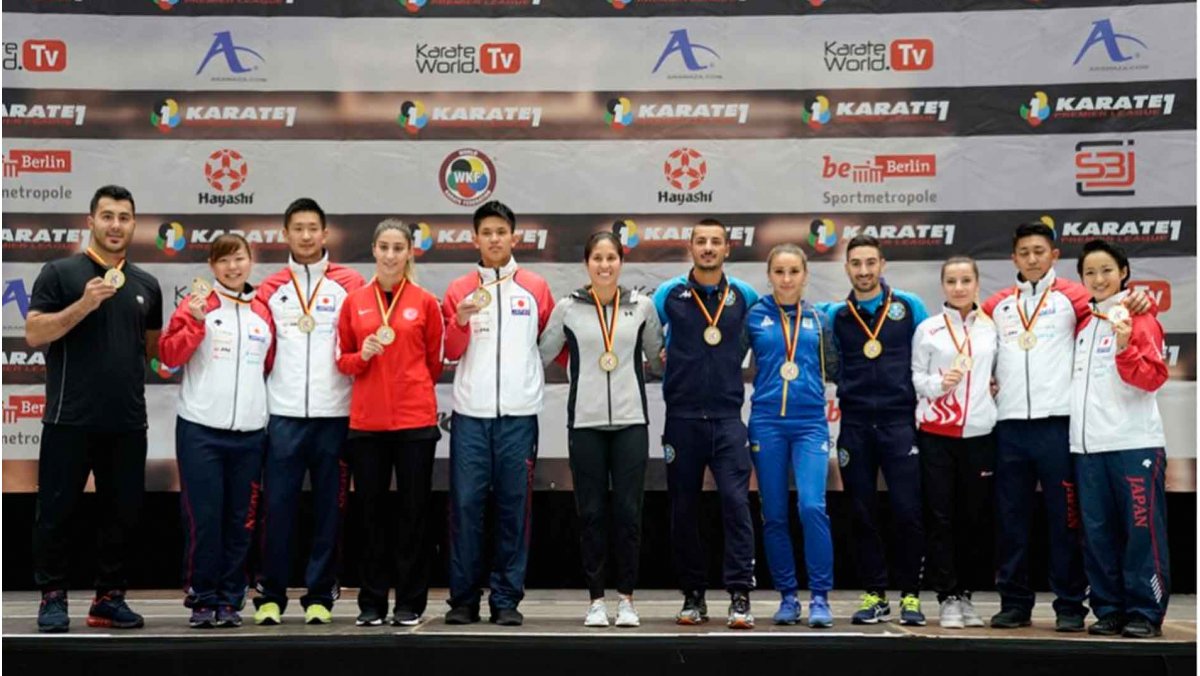 The current Grand Winners wrapped up their participation at the Karate 1-Premier League Berlin with crushing victories and taking the gold medals of the tournament. The sixth stage of the season of Karate’s first-class series of international events finished in Berlin as Grand Winners and new names of the sport took the spotlight of the final day of action.

The current Grand Winners wrapped up their participation at the Karate 1-Premier League Berlin with crushing victories. The sixth stage of the season of Karate’s first-class series of international events finished in Berlin as Grand Winners and new names of the sport took the spotlight of the final day of action.

Turkey’s Serap Ozcelik became one of the biggest stars of the day with her victory in Female Kumite -55kg. The current Grand Winner beat Japan’s Ayako Tadano by ‘Hantei’ or decision in a tight final bout (0-0). The second-placed in WKF World Ranking from Turkey demonstrated to be on top form and took her third gold this year after her victories in the Karate 1-Premier League Dubai and the European Championships.

“I am very happy with this gold medal. It was a very difficult tournament but I just wanted to win, so I am very glad that I could do it,” said Ozcelik.

The success of the Grand Winners today was extended by Ukraine’s Anzhelika Terliuga. The fan-favourite karateka from Ukraine defeated Estonia’s Li Lirisman in the final of Female Kumite -55kg after presenting a firm and convincing performance on the tatami. The current Grand Winner of the category scored an outstanding Ippon by ‘Ura-mawashi geri’ kick, and then took a ‘Yuko’ to close the bout 4-0 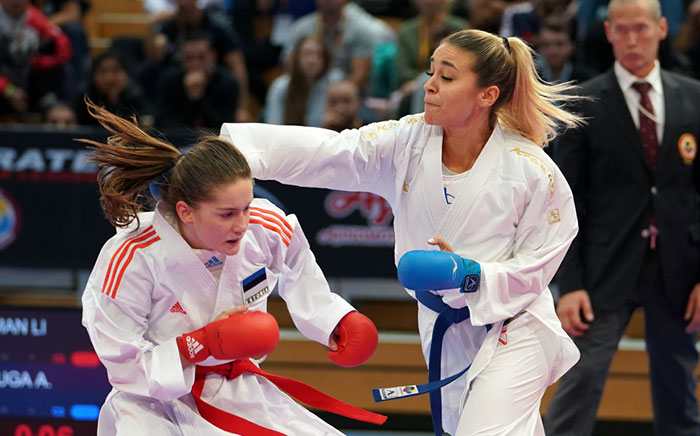 “I feel very good about this gold medal. The Karate 1-Premier League in Germany is my favourite tournament, I have won gold medals here three years in a row. I feel a special atmosphere here that helps me win,” said Anzhelika Terliuga.

“It was important for me to start the Olympic qualification process with a victory. I hope I will get all the medals in the next two years, so I can make my dream of being in the Olympic Games 2020 come true,” added the Grand Winner.

Japan topped the podium of the tournament with a final count of 14 medals and five golds. Two of the leaders of the Japanese success were Grand Winners Ryutaro Araga and Ayumi Uekusa. The two owners of the karate-gi with golden embroidery dominated their categories and take a step forward in their quest to re-take the Grand Winner award next month in Tokyo.

Ryutaro Araga defeated Daniyar Yuldashev of Kazakhstan by 3-0 following an efficient demonstration on the tatami. It is Araga’s second consecutive gold medal after his victory in the AKF Championships. 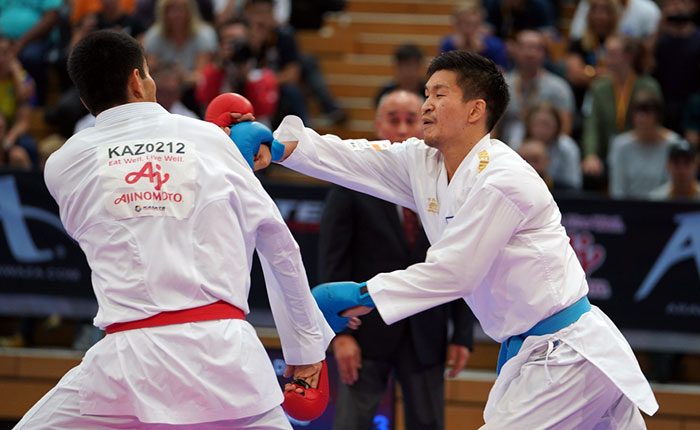 “It was a very high-level competition. You can tell that the best in the world are here. It was a difficult tournament and I am happy to win again,” said Ryutaro Araga.

“The season did not start very well for me. But now we go to Tokyo where I hope to get a lot of support since we will be competing at home,” added the Grand Winner.

Meanwhile, Ayumi Uekusa continued on excellent form and achieved her fourth gold medal this year. The Japanese Grand Winner beat Clio Ferracuti of Italy in the final of Female Kumite +68kg (5-1) in a showdown of brilliance by the current World champion. 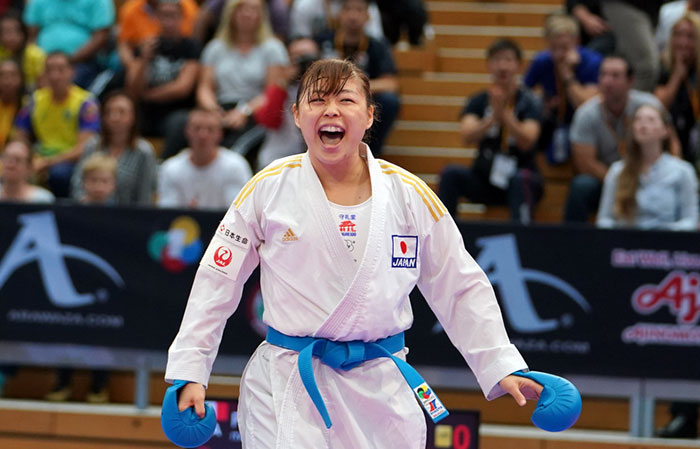 After being absent for most of the season and only taking one medal this year – his gold in Karate 1-Premier League Paris – Sajad Ganjzadeh of Iran came back to the top with his victory in Berlin. The Grand Winner of Male Kumite +84kg upset Gogita Arkania of Georgia in a hard-fought bout between the two last World champions in the category. Ganjzadeh, who won the World title in 2016 dominated the fight over the 2014 world title-holder so to win his sixth gold medal in Karate 1-Premier League.

Japan continued prevailing in the Kata competition as the representatives of the birth nation of the sport claimed four of the eight medals at stake. Kiyou Shimizu excelled at her presentation of “Chatanyara Kushanku” kata and defeated Grand Winner Sandra Sanchez of Spain by split decision (3-2) in the final of Female Kata. It is the sixth gold medal in eight events for World champion Shimizu who has taken the AKF title and the Asian Games crown this year. 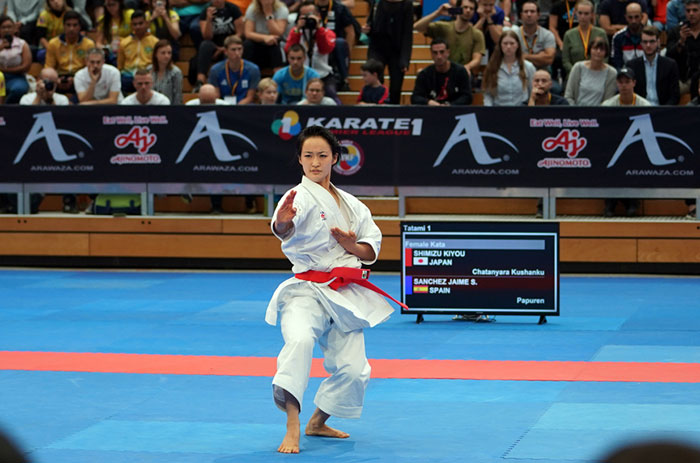 The Italian delegation also had plenty of reasons to celebrate as they finished the event with four medals including two golds. Both of the titles for Italian karatekas came by ‘Senshuu’ or first scored point. Angelo Crescenzo defeated Yugo Kozaki of Japan in a roller-coaster final of the Male Kumite -60kg. The Italian representative took a ‘Wazari’ and two ‘Yuko’, the same as his opponent today. However, Crescenzo claimed the gold medal as he was first to score.

Japan’s Yusei Sakiyama produced the biggest upset of the day, as the up-and-coming Japanese karateka crushed five-time World champion Rafael Aghayev of Azerbaijan in the final of Male Kumite -75kg. In the most surprising result of the tournament, the young athlete from Japan presented such a demonstration of offensive Karate, that the renowned star from Azerbaijan could not stop the flood of points coming his way. Sakiyama started the bout with an early ‘Yuko’. Then the karateka from Japan produced an outstanding ‘Ippon’ to take a clear lead in the bout. While Aghayev scored three ‘Yuko’, Sakiyama maintained the advantage and claimed two more ‘Yuko’ to wrap up the outstanding demonstration with a final 6-3. 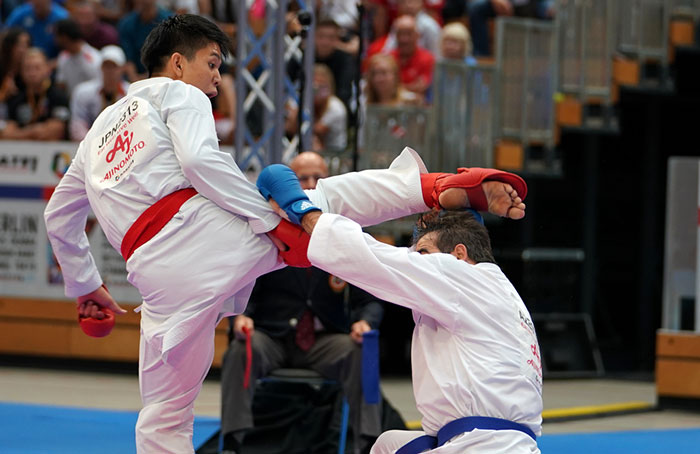 The title-deciding bout of Female Kumite -68kg also had a thrilling outcome as Eda Eltemur of Turkey prevented a clean sweep by the Grand Winners. In one of the highest scoring bouts of the day, the Turkish karateka defeated Irina Zaretska of Azerbaijan by an impressive 7-3. Alexandra Grande’s victory over France’s Leila Hertault in Female Kumite -61kg (3-1) completed the list of gold medallists in Berlin. 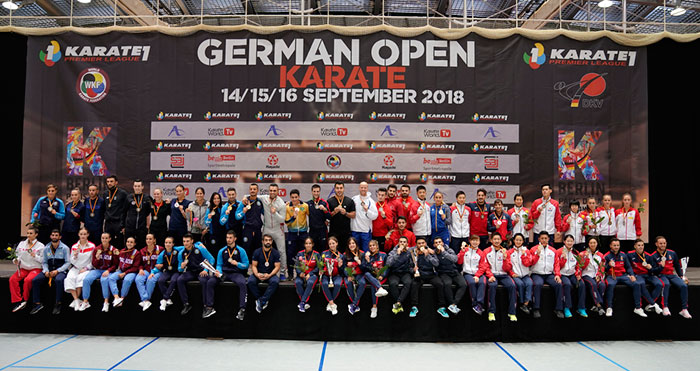