Grand Winners produced a superb display at the Karate 1-Premier League Shanghai and secured the gold medals at stake in the fourth event of the season. Serap Ozcelik, Ugur Aktas, Alizee Agier and Ryo Kiyuna were among the big winners in Shanghai while Xiaoyan Yin triumphed at home and delighted local fans who enjoyed the spectacular demonstration on the tatami.

Grand Winners produced a superb display at the Karate 1-Premier League Shanghai and secured the gold medals at stake in the fourth event of the season. Serap Ozcelik, Ugur Aktas, Alizee Agier and Ryo Kiyuna were among the big winners in Shanghai while Xiaoyan Yin triumphed at home and delighted local fans.

The owners of the "Best of the Best" award demonstrated excellent form and dominated the competition with victories here in Shanghai. Serap Ozcelik of Turkey achieved her fifth gold medal in seven events and confirmed her favourite status in the category of Female Kumite -50kg. The current Grand Winner in the category beat Alexandra Recchia of France in a tight bout 5-4. Ozcelik took a clear lead after scoring two “Yuko” and an impressive “Ippon”. However, former World champion Alexandra Recchia showed outstanding resilience and claimed four “Yuko” to stay on a brink of forcing the tie. Nonetheless, Ozcelik maintained the differences and won the bout 5-4.

“I am very happy because this victory puts me closer to my big goal of winning the Grand Winner award again. The bout today was very difficult because Alexandra (Recchia) is very strong. I know her very well, and I am very glad that she could be in the final today,” said Serap Ozcelik. 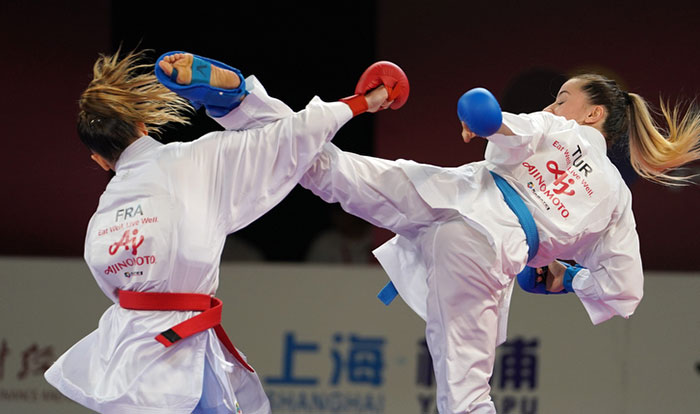 Alizee Agier of France also used the Grand Winner status to reach the top of the podium. The French fan favourite produced one of the highlights of the day with her sensational victory over China’s Li Gong. The Chinese karateka tried to have the support from the stands in her favour, and scored one “Ippon” and one “Yuko”. However, Agier showed fantastic form and presented a repertoire of offensive Karate to score two “Wazari”, one “Yuko” and one memorable “Ippon”.

The third gold for Grand Winners today was claimed by Ugur Aktas of Turkey. The Turkish star prevailed in Male Kumite -84kg after getting a 4-3 victory over Ivan Kvesic of Croatia. The World champion from Croatia tried to upset Aktas, but the WKF World ranking leader kept the control of the match to take his second gold of the season in Karate 1-Premier League.

“I really wanted to win this match. In the World Championships I lost against him (Ivan Kvesic) in semi-finals, so I am happy that I could win this time. I know that it is a long way to achieve my goals but I will do my best to make my dreams of qualifying for the Olympic Games come true,” said Ugur Aktas. 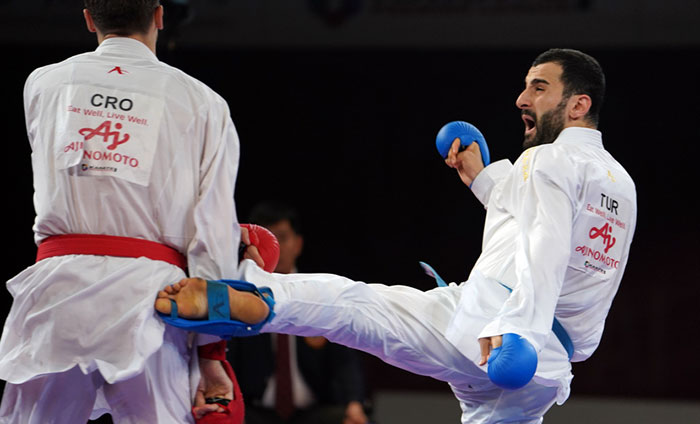 Japan’s Ryo Kiyuna extended his impressive domination of Male Kata with his fourth title in four appearances this year thus completing the gold medal count for the Grand Winners. The current WKF World ranking leader from Japan defeated Damian Quintero of Spain in the final after excelling with his “Ohan Dai” kata and taking a score 28.26 for 26.16 the European champion from Spain. With this title, Kiyuna claims his eighth consecutive crown in international competitions.

Chinese Karate fans were delighted by Xiaoyan Yin’s victory at home in Shanghai. The local star claimed the only title for hosts in individual competition after defeating Jovana Prekovic of Serbia in Female Kumite -61kg. Prekovic, who is the current World champion was shocked by the efficiency of the representative of the organising country as Xiaoyan Yin upset Prekovic with a fantastic performance 7-4.

“I am very excited about this victory. I was encouraged by all the spectators here today and I feel fantastic for winning the gold medal at home. It is great to win in front of your friends,” said Xiaoyan Yin. 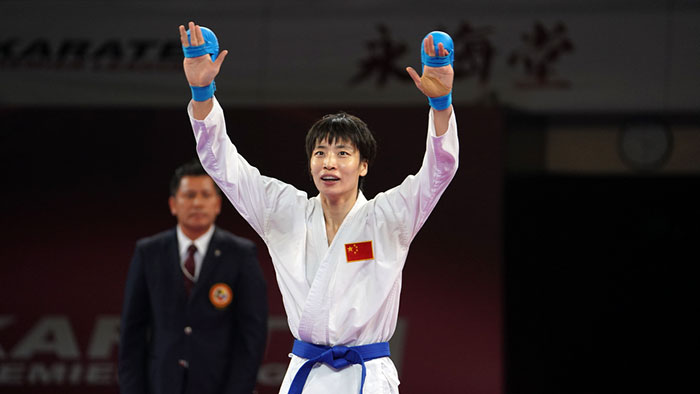 The outstanding duel that the two top competitors in Female Kata are headlining this year, featuring Spain’s Sandra Sanchez and Japan’s Kiyou Shimizu went this time to Sanchez’s hands. The Grand Winner from Spain excelled in her performance of “Chatanyara Kushanku” Kata and earned a score of 26.74 for 26.54 of the Japanese Kata ace.

“When I step into the tatami, it is like if I go into a different world. I receive an energy that helps me overcome all the difficulties. I am very happy because this victory puts Kiyou Shimizu and me with two gold medals each in Karate 1-Premier League. This is very important because it leaves the race for the Grand Winner very open for the two of us,” said Sanchez.

It was the sixth time that the two front-runners met in the final of a major event this year, with the Spanish World champion taking four golds and the Japanese two-time World title-holder winning two gold medals. 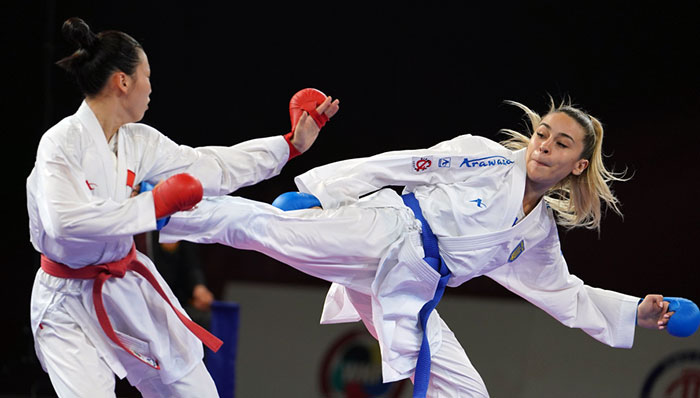 In Female Kumite -55kg, Anzhelika Terliuga of Ukraine impressed with a demonstration of offensive Karate and upset local hopeful Jiaime Ding 6-0. The Ukrainian former Grand Winner proved too strong for the Chinese karateka and took the victory and the gold medal after scoring three “Yuko” and a sensational “Ippon”.  It is the third title for the Ukrainian WKF World ranking leader this year.

The list of gold medallists is completed by Sofya Berultseva of Kazakhstan who upset local hopeful Mengmeng Gao in Female Kumite +68kg (7-5) in roller-coaster of bout. Meanwhile, Andres Madera of Venezuela defeated Seyedali Karimi of Iran by accumulation of sanctions in Male Kumite -67kg.

The two finals with team-mates clashing against each other were solved with Kazakhstan’s Darkhan Assadilov beating colleague Kaisar Alpysbair by “kiken” or injury in Male Kumite -60kg while Iran’s Sajad Ganjzadeh defeated team-mate Saleh Abazari in Male Kumite +84kg by “Hantei” or decision. The gold medals in team categories went for Kuwait in Male Team Kata and Japan in Female Team Kata.

The Karate 1-Premier League travels now to Tokyo (Japan) where the fifth event of the season will take place from September 6 to 8.