Get to Know EMIL PAVLOV, FYR of Macedonia Athlete of the Year and #EuroKarate2019 medallist 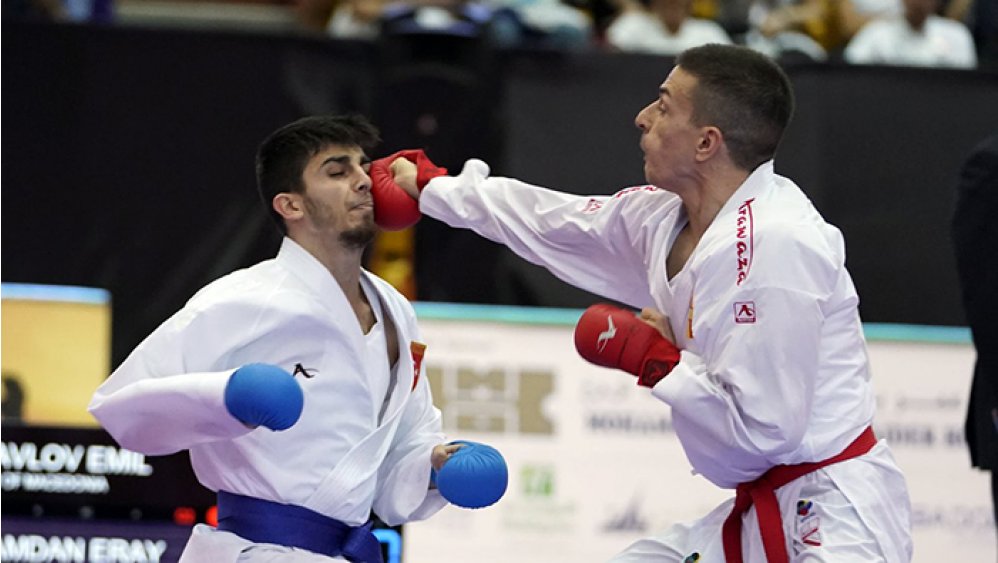 It was one of the highlights of the 2019 European Karate Championships. At the event which was held this past weekend in Guadalajara, Emil Pavlov of FYR of Macedonia and Bogdan Marian Florin Gogolosi of Romania were clashing for the bronze medal of Male Kumite -60kg. The Romanian karateka had taken a clear lead with a ‘Wazari’.

It was one of the highlights of the 2019 European Karate Championships. At the event held this past weekend in Guadalajara, Emil Pavlov of FYR of Macedonia and Bogdan Marian Florin Gogolosi of Romania were clashing for the bronze medal of Male Kumite -60kg. The Romanian karateka had taken a clear lead with a ‘Wazari’.

Emil Pavlov struggled to fight back and managed to get two ‘Yukos’ so to tie the match. As minutes passed, the bout was heading to the end with Gogolosi still keeping the advantage of ‘Senshu’ or first unopposed point. It seemed that the bronze medal was going to the Romanian side. However, with only 23 seconds left, Emil Pavlov found a path to bring out a flying ‘Tsuki’ that took Gogolosi by surprise. The Macedonian karateka was awarded the ‘Yuko’ to win the bout 3-2. Emil Pavlov took home the bronze medal. This tight victory showcases Pavlov's resilience, one of the aspects that have made him the best Macedonian karateka of all times. 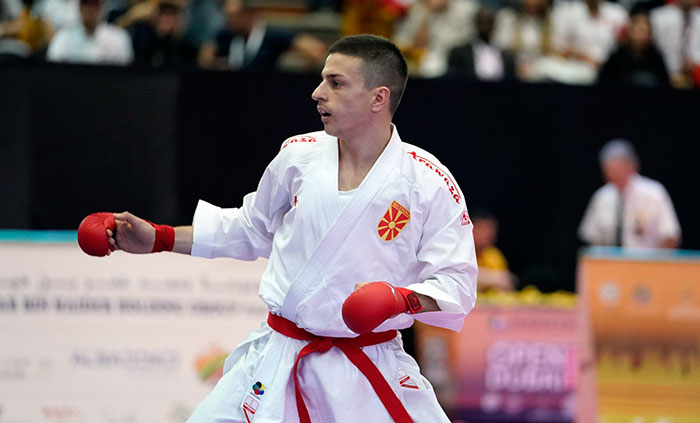 “For me, it is never enough, I always try to give my best. Despite previous results, I always try to get better and better. I was European champion twice, but I am always hungry for more medals,” said the karateka who will be 27-years-old next Saturday.

A LEGEND AT HOME

In nearly ten years of international career, Emil Pavlov is getting used to being the true record-breaker of Macedonian Karate. The first-dan karateka was the first Karate athlete of his country to win a gold medal at the European biggest event; moreover, he was the first-ever Macedonian athlete to take gold at any European Championships.

“I am very proud to be the first athlete in FYR of Macedonia to win a gold medal at the European Championships in all Olympic sports. It is very important to me. I think that younger generations and other athletes will believe in themselves after seeing what I did. They will realise that they also can do it. It is just the result of hard work,” added Pavlov. 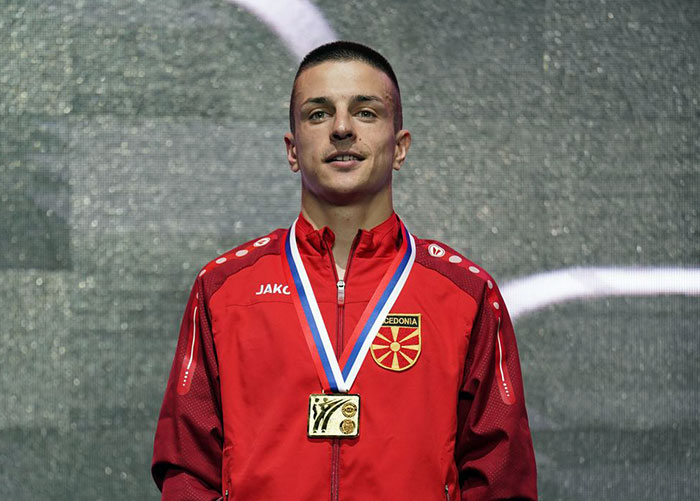 At only 21-years-old, Pavlov won his first gold medal in international competitions. It was in Salzburg (Austria) at the 2013 Karate 1-Premier League Grand Final. A year later, Pavlov broke all the records for Macedonian Karate when he reached the top of the podium at the 2014 European Championships.

Also winner of the 2014 Balkan Senior Championships, Pavlov has won four medals at Karate 1-Premier League events. At the European Championships, he added a bronze medal in 2016 to the title he won in 2014. Last year in Novi Sad, Pavlov recovered the European crown. He won his second continental title after edging Italy’s Angelo Crescenzo in the final by 3-1. This past weekend in Guadalajara, the karateka who takes the 13th place at the WKF World ranking won his fourth continental medal. 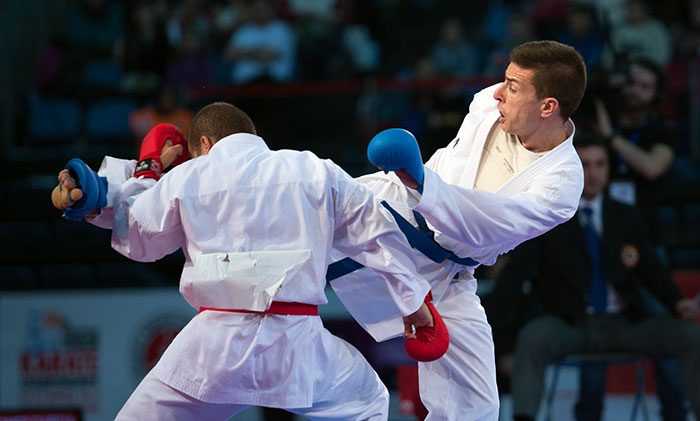 “You can tell that the best athletes in Europe are here and it is very difficult to succeed. I wanted to be in the final again, but this time I could not do it. Anyway, for me it is important to win another medal,” stated the Macedonian karateka.

ATHLETE OF THE YEAR

Pavlov’s popularity in his country was officially established last December. He was designated FYR of Macedonia’s “Sportsman of the Year”. The Macedonian karateka topped other sporting stars in the country and received the award that recognises the best athlete in the nation among all the sports disciplines.

“It is a great honour to be distinguished with the award of Athlete of the Year. There are many good athletes in other sports, so it is a great feeling and a big boost for me personally and for Karate. It gives me the courage to continue trying to be better every day and to continue fighting hard to get better results,” added Pavlov. 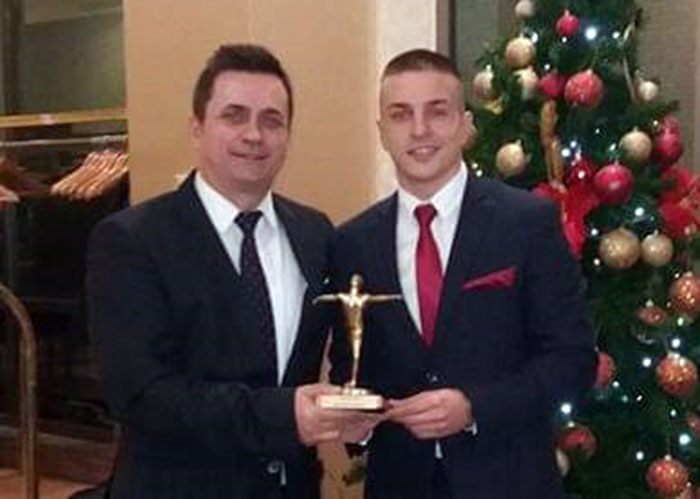 When asked about his relationship with the sport, Emil Pavlov is adamant about the importance of Karate in his life.

“Karate has always played a crucial role in my life. Karate gave me confidence, discipline, self-motivation, it helped me in hard times, and it helps me to take good decision every day.  I can say that Karate helped me a lot in every possible way,” said Pavlov.

The 26-going-to-27-year-old athlete started doing Karate at a young age as a gamble among friends. Years later, all his friends had quit the sport. Not Emil.

“I really got into it and trained and trained. I never gave up. I always believed in myself and I loved Karate from the first day,” added the top karateka.

Now, as Karate is heading to its Olympic debut in Tokyo 2020, and while the sport is also going through troubled times with the exclusion from the Paris 2024 Olympic Games, Emil Pavlov has a clear idea about what the future may bring.

“I know one thing, that I will continue doing Karate until my last day. I will always be involved in karate.” 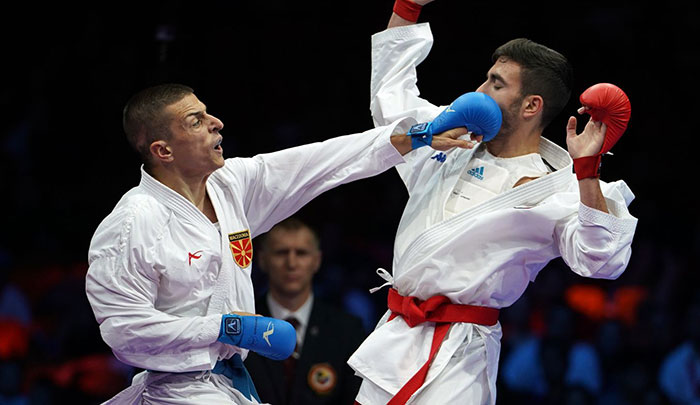