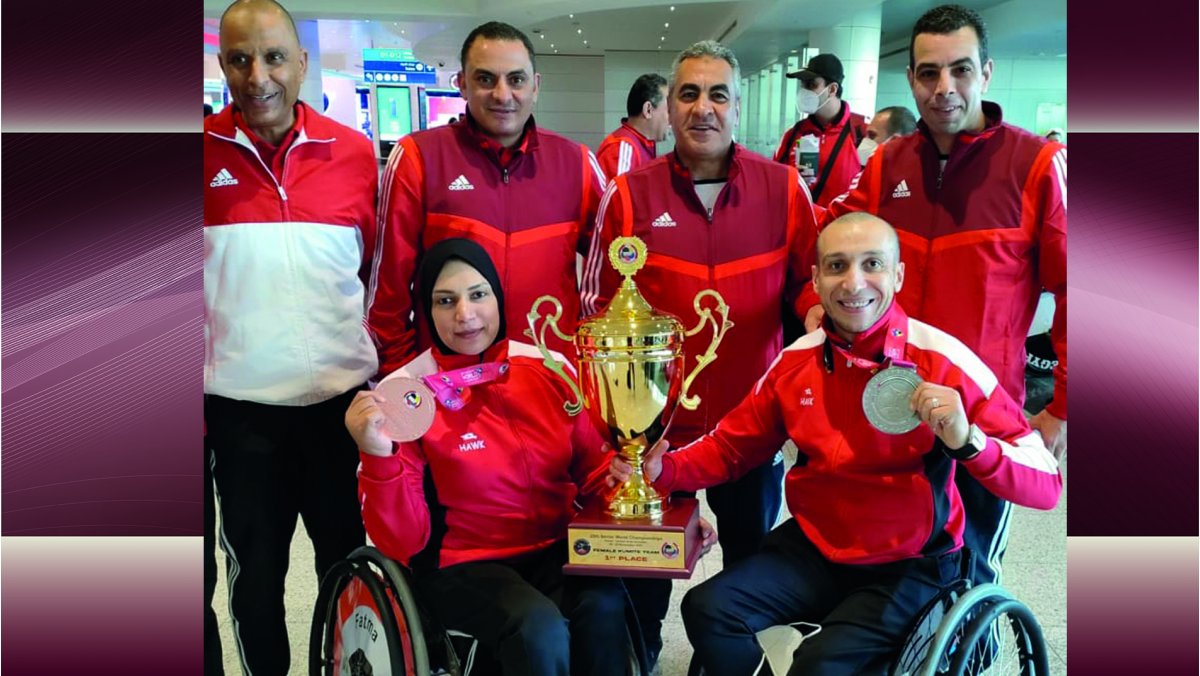 Just in time to celebrate the International Day of People with Disabilities, and as the WKF is announcing the launching of the Para-Karate World ranking, get to know the two Para-Karate athletes and learn how they starred in the arguably most touching and inspiring love story of the last edition of the World Senior Championships.

This is how love conquers all difficulties, featuring Muhammad and Fatima.

Twenty years ago, Muhammad Al-Laqani suffered a devastating car accident that put him in a wheelchair for the rest of his life.

Fatima Mahmoud was never far from wheelchairs herself as she had a motor disability since childhood as a result of polio.

Through hard work and resilience, Muhammad Al-Laqani earned a Ph.D. degree in Self-Motivation and Skills Development. His passion for Karate gave him the strength of will to dominate the sport thus winning the silver medal at the 2018 Para-Karate World Championships. In Dubai last month, he repeated the impressive performance and also took the silver medal.

Meanwhile, Fatima Mahmoud became the first makeup artist in Egypt and the Arab world to challenge people with disabilities. Also passionate about Karate, she won the bronze medal at the 2021 Para-Karate World Championships. 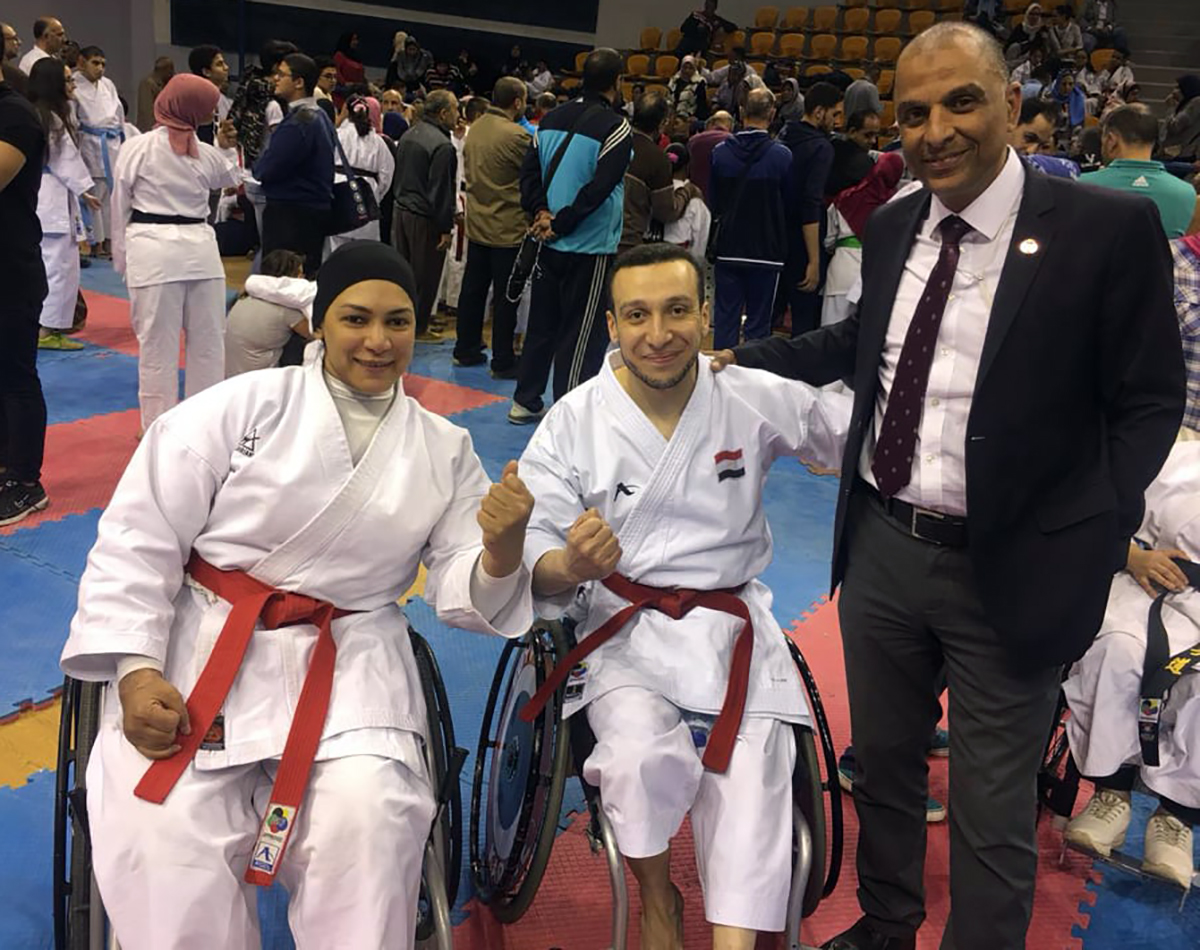 Eleven years ago, Muhammad was giving a lecture on motivation, and then, he met Fatima.

“When I saw her and spoke to her, I found out that she had a tremendous will, and I saw that she had a pure, beautiful heart. Soon we decided to get engaged and to get marry, and our lives began”

“We are together on the sweet and the bitter. We were able to face all odds and all circumstances to set an example on how to love without conditions. We have showed that our circumstances did not stand in front of our love.”

Despite all challenges, the two Egyptian athletes grew strong together, defeating all situations, and always with Karate as a strong link. 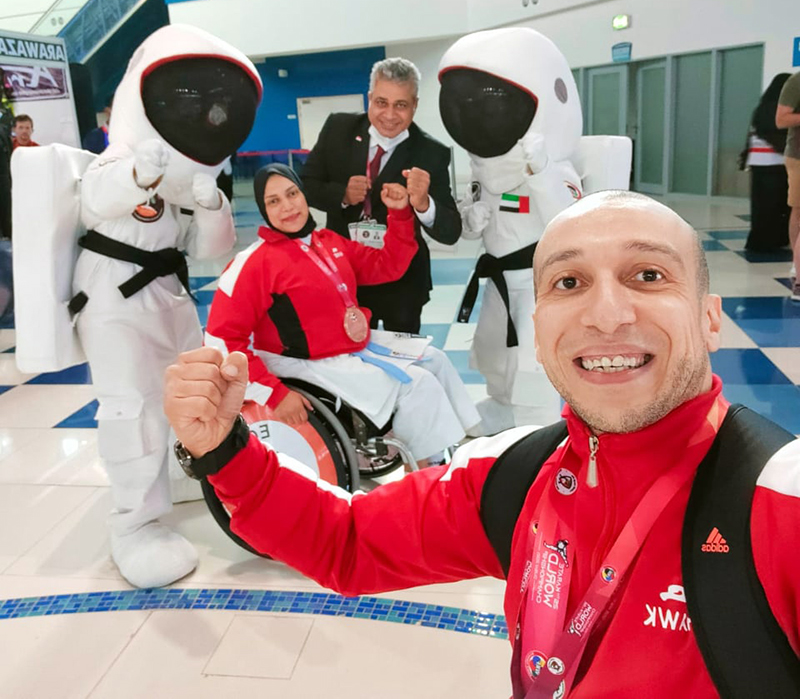 “Both of us love karate. Now we are training in the same club, and we have equipped part of the house with a floor for the practise of Karate. We continued with technical and physical training and we have been encouraging each other over years to fulfil our dream.”

“We decided to bear all the challenges and we achieved a historic success: the first couple to win medals in a Para-Karate World Championships.”

At the World Championships in Dubai, Muhammad Al-Laqani brilliantly reached the final of Male Wheelchair User K30 so as to lose the title-deciding bout against team-mate and defending champion Abdelaziz Abouelnaga.

Meanwhile, Fatima Mahmoud made it to the bronze medal bout in Female Wheelchair user K30 where she defeated team-mate Yomna Elsayed.

THE GREATEST SUCCESS OF ALL

However, Muhammad and Fatima’s greatest joy came far from the tatamis or from the professional fields.

“The Lord blessed us with our beautiful son Hamza, our beloved six years old. He practices karate with us all the time, and he moves with us every day. He was with us in the national team camp,” said Al-Laqani.

Muhammad and Fatima’s resilience makes them the perfect showcase of the strength of the Karate Values now that the International Day of People with Disabilities is celebrated on December 3rd.

CLICK HERE to go to the WKF Para-Karate World ranking.

“Maybe not everyone knows that our lives are full of challenges and difficulties and that we find many barriers along the way, but we decided to complete our lives with will and seek the help of God while we are together.”