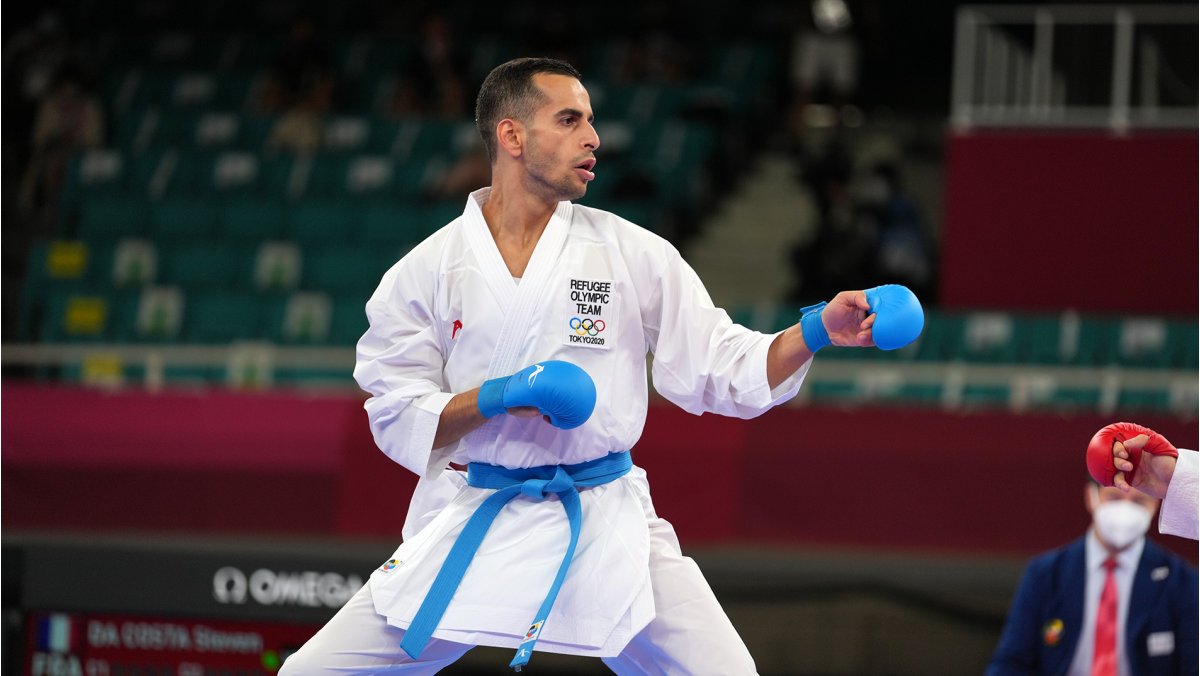 Hamoon Derafshipour’s focus on performing at the Olympic Games Tokyo 2020 has barely wavered.

After leaving Iran two years ago to settle in Canada, Hamoon Derafshipour’s focus on performing at the Olympic Games Tokyo 2020 has barely wavered.

“I'm currently only focusing on my competitions to be successful and win them,” he says when asked about his decision to uproot his life to ensure his wife, Samira Malekipour, could be his coach. “At this moment, it doesn't matter what happened in the past and what will be happening in the future.”

The bronze medallist in Kumite at the 2018 World Championships is part of the IOC Refugee Olympic Team competing in Tokyo. He’s one of two male karatekas in the 29-strong group of refugee athletes participating in 12 sports at the Games. Wael Shueb of Syria is the other.

Malekipour, herself an elite karateka, was not allowed to train her husband in the build-up to Tokyo 2020 due to existing rules in their native country, so they fled to Canada in an attempt to give Derafshipour a better opportunity to fulfill his dreams of taking part in Karate’s debut Olympics. 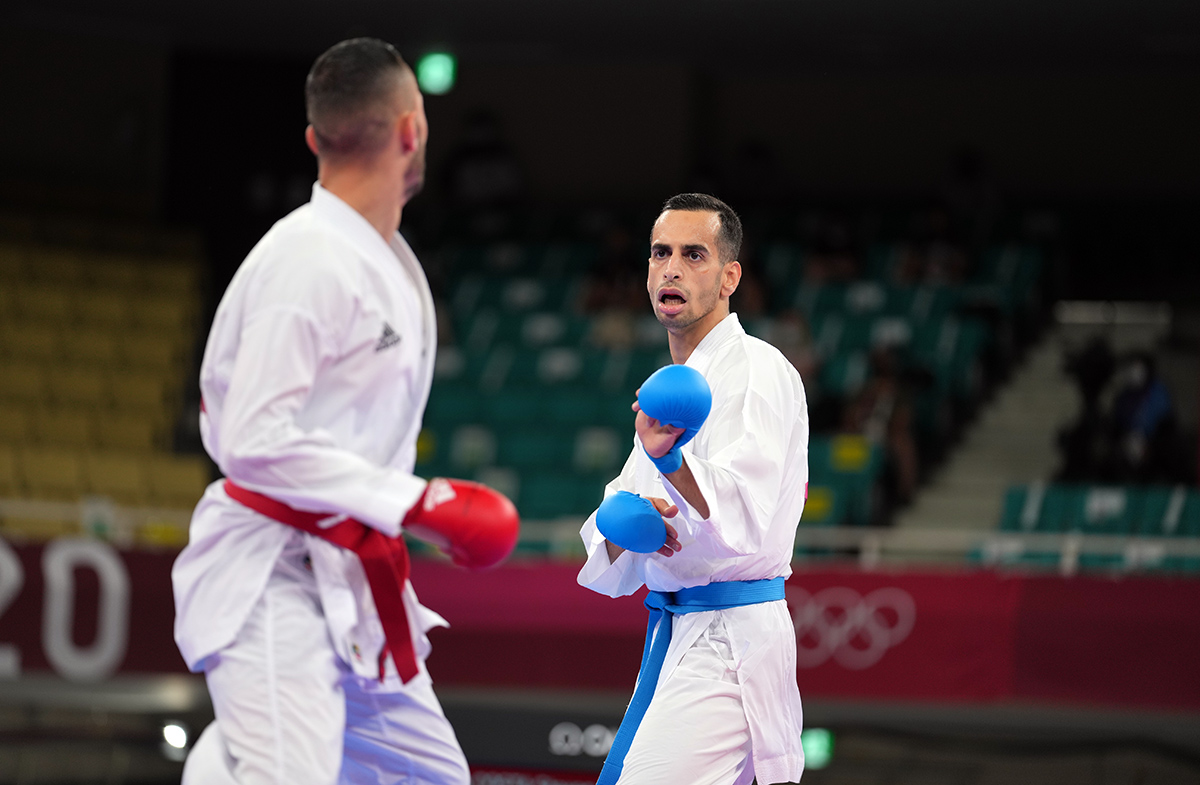 The 28-year-old, born in Kermanshah near the Iran and Iraq border, has had to deal with the challenges of relocating to a new country and integrating into the Waterloo community in Ontario. He’s also overcome the training problems that came with the COVID-19 pandemic shutting the gyms – one in Kitchener, another in Cambridge – where he and his wife are Karate instructors.

The couple has also worked for a supplier of interior components for the North American automotive industry, to helped fund Derafshipour’s Olympic Karate ambitions.

Derafshipour, who competed for the Iran national team for many years, says his wife has kept him going through the hard times.

“Samira knows and understands me better than anyone else and this is a significant positive point in my life,” he explains. “She has been an athlete and champion as well. Therefore, she keeps me motivated all the time.”

When he took up Karate aged 7, he never thought about performing on the planet’s greatest sporting stage, simply “competing in very high-level karate competitions. But I have had the dream of competing in the Olympics since I was 14 or 15 years old.”

Derafshipour will accomplish his goal when he sets foot on the tatami in Tokyo to take part in the Men’s Kumite -67kg category today, 5 August. It’s the first of three days of what will be an action-packed Olympic Karate competition at Tokyo 2020. 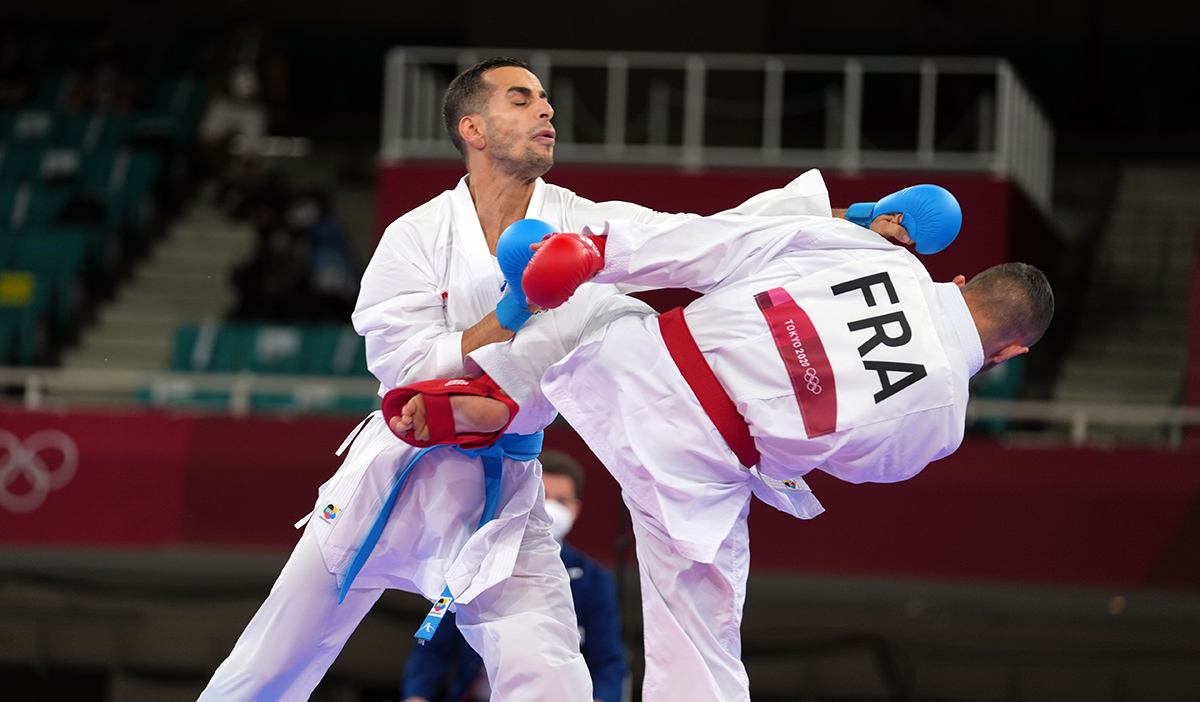 The two-time Asian champion says he’s “proud and excited” to be part of an Olympics featuring his beloved sport for the first time, adding: “I'm really happy to be in the Olympics and I believe that I deserve it. However, my main happiness would be after winning a medal.”

Derafshipour, who has also claimed five medals in the Karate 1 events, getting to Tokyo is just half the battle.

“We are very excited about taking part in Tokyo. But it is not enough for us. We want to get results and win a medal,” he says, speaking for himself and his wife. It’s truly a team effort.

Derafshipour is hoping his lifelong devotion to Karate will bring rewards in the Japanese capital.

And he pays tribute to the sport he loves for giving him a new lease of life in the North American country where he now resides. Post-Olympics, his aspirations appear tied to the sport.

“Karate has been the most important part of my life … and everything I've achieved in my life has been due to Karate,” he says. “It has given us a good life in Canada and we are very happy living here. Canada is my home and I hope to compete under the Canada flag soon.”