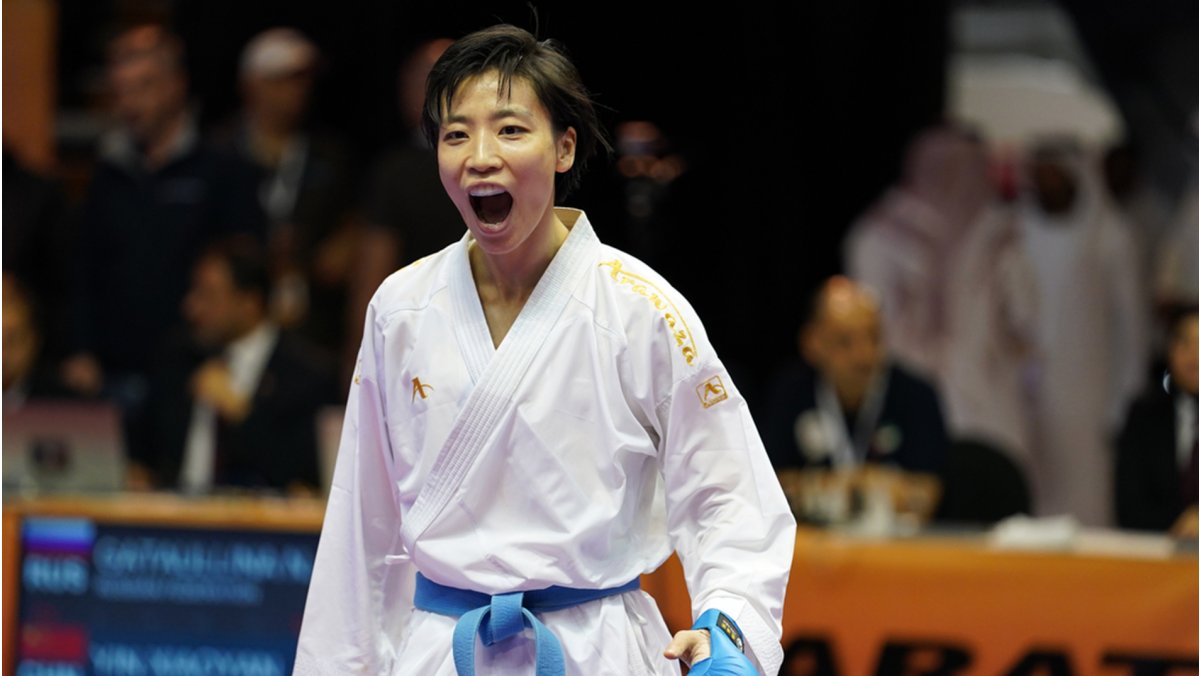 The final of Male Kata will have two of the most revered competitors face to face. Antonio Diaz of Venezuela and Damian Quintero of Spain will meet in the final in one of the most anticipated highlights of the competition. Current World Championships runner-up Damian Quintero confirmed his front-runner status and qualified for his fourth consecutive final this season. The number 2 in WKF World ranking topped the pool with “Anan Dai” kata and a score of 26.68.

His rival in the final is Antonio Diaz of Venezuela. The Kata legend from Venezuela made it to his first final since taking silver at the 2018 Karate 1-Premier League Rotterdam and adds one more recognition to his medal-full career. Diaz dominated his pool with “Suparinpei” kata and a score of 25.36 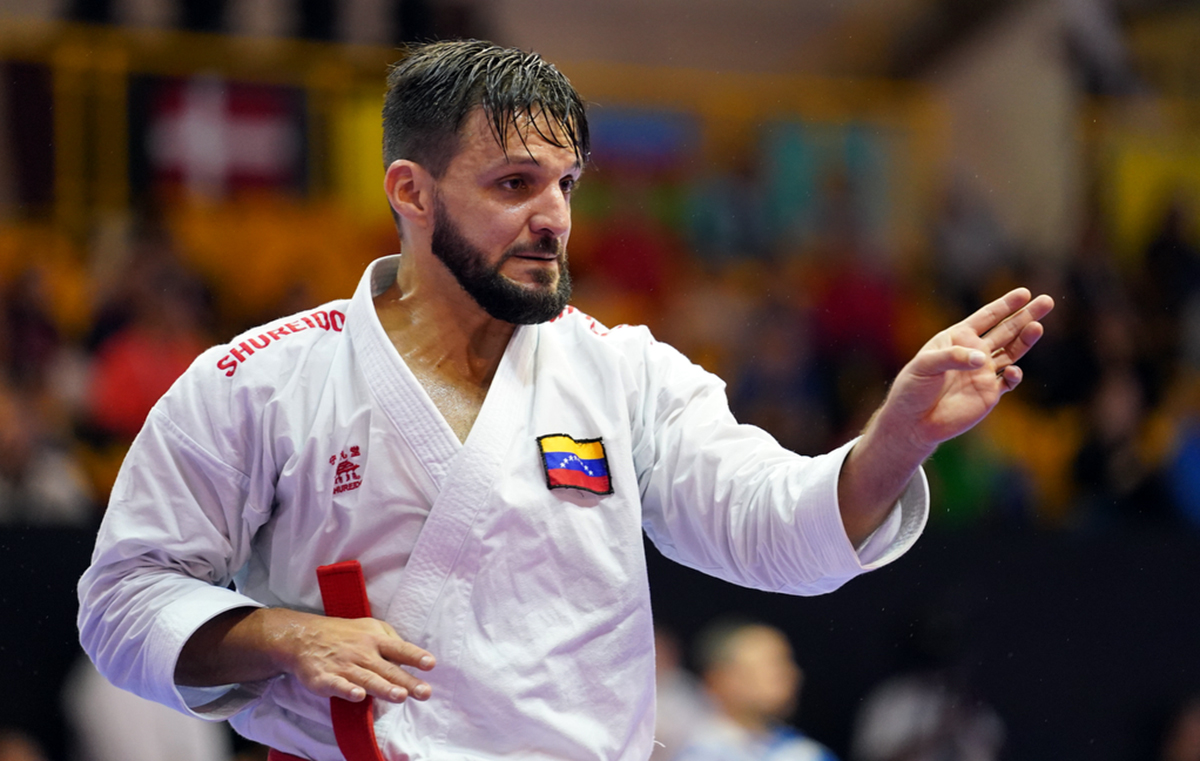 Antonio Diaz said: “I am very pleased to be in the final, especially now that we are so close to the Olympic Games. This qualification to the final is very important to me because it is the first time that I make it in nearly two years and because it almost secures my ticket to Tokyo 2020. The level of Kata has increased so much over the last years that now every competitor has options to succeed. My goal is to ensure my qualification to the Games and to continue enjoying every tournament.”

After the successful performance of Grand Winners in the opening day of competition, China’s Xiaoyan Yin continued the medal count for the owners of the golden karategi in day 2 of #Karate1Dubai. The World ranking leader from China defeated Russia’s Nailya Gataullina in semi-finals (6-1) and qualifies for her second final this year. Her rival in the final is Shima Alesaadi of Iran. The Iranian karateka surprised favourites and made it to her first-ever final in international competitions following a victory by “Hantei” or decision over Egypt’s Giana Lotfy (2-2). 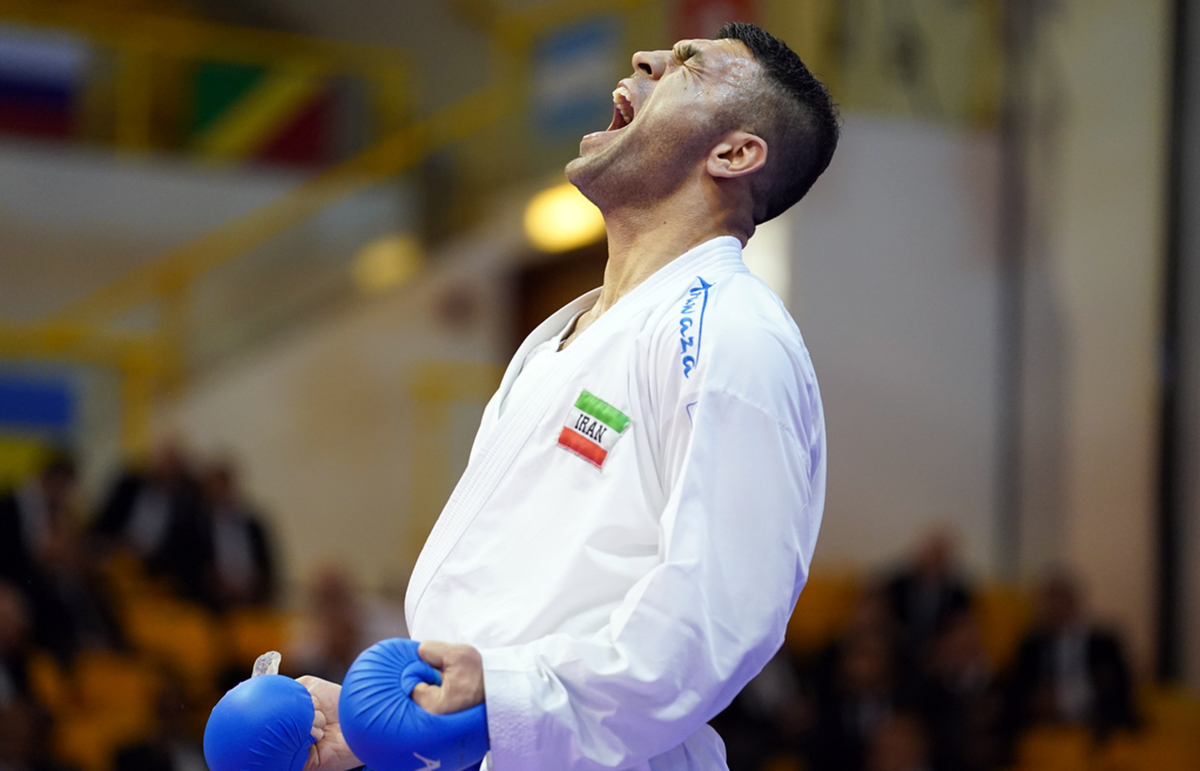 JONATHAN HORNE BACK TO WINNING WAYS

The final of the category is completed with Gogita Arkania of Georgia. The third-placed karateka in the ranking beat Rodrigo Rojas of Chile in the semi-final by “Hantei” or decision (0-0).

Jonathan Horne said: “It’s being a good start of the year for me. I hope it continues that way and that I can keep on making the best of my performance. I have fought against Gogita (Arkania) many times; sometimes it went my way and sometimes it went his way, so anything can happen tomorrow.” 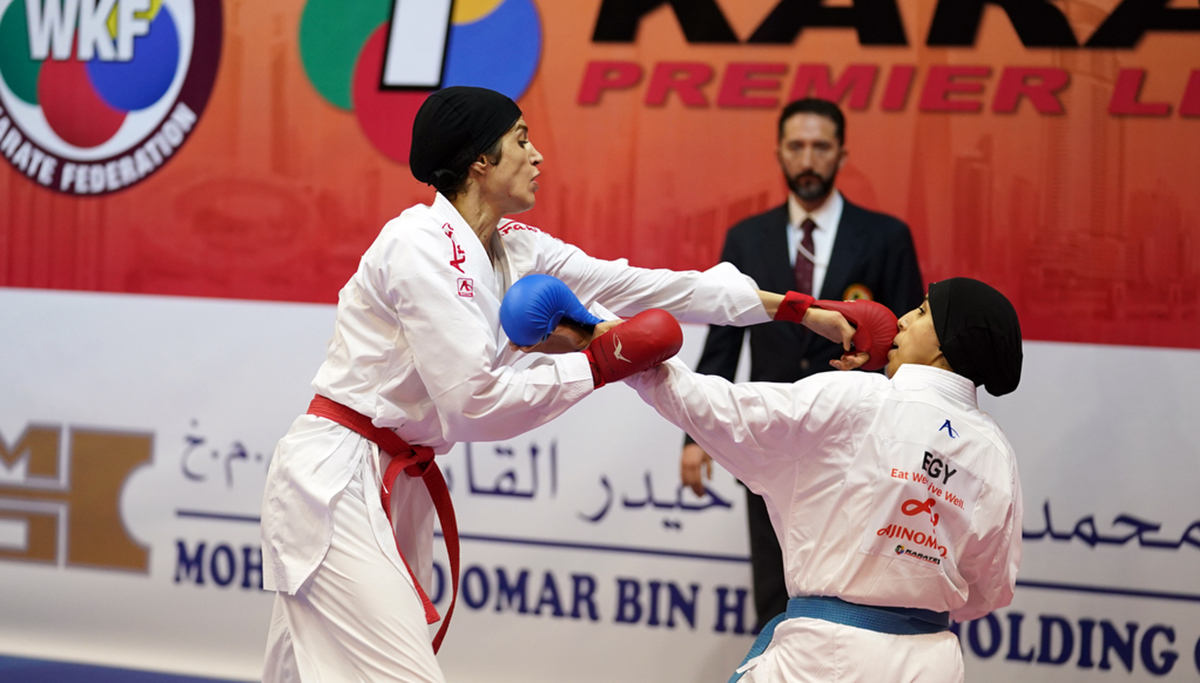 The rest of the categories at stake today did not have Grand Winners involved in the gold medal bouts. In Male Kumite -84kg. Zabiollah Poorshab won the All-Iran semi-final against team-mate Mahdi Kohdabakhshi 3-2 to reach his first final since his victory at the 2019 Karate 1-Premier League Moscow. The other spot on the tatami in the title-deciding bout of the category will be taken by Daniyar Yuldashev of Kazakhstan who upset Petar Spasenovski of North Macedonia 6-0 in the second semi-final. 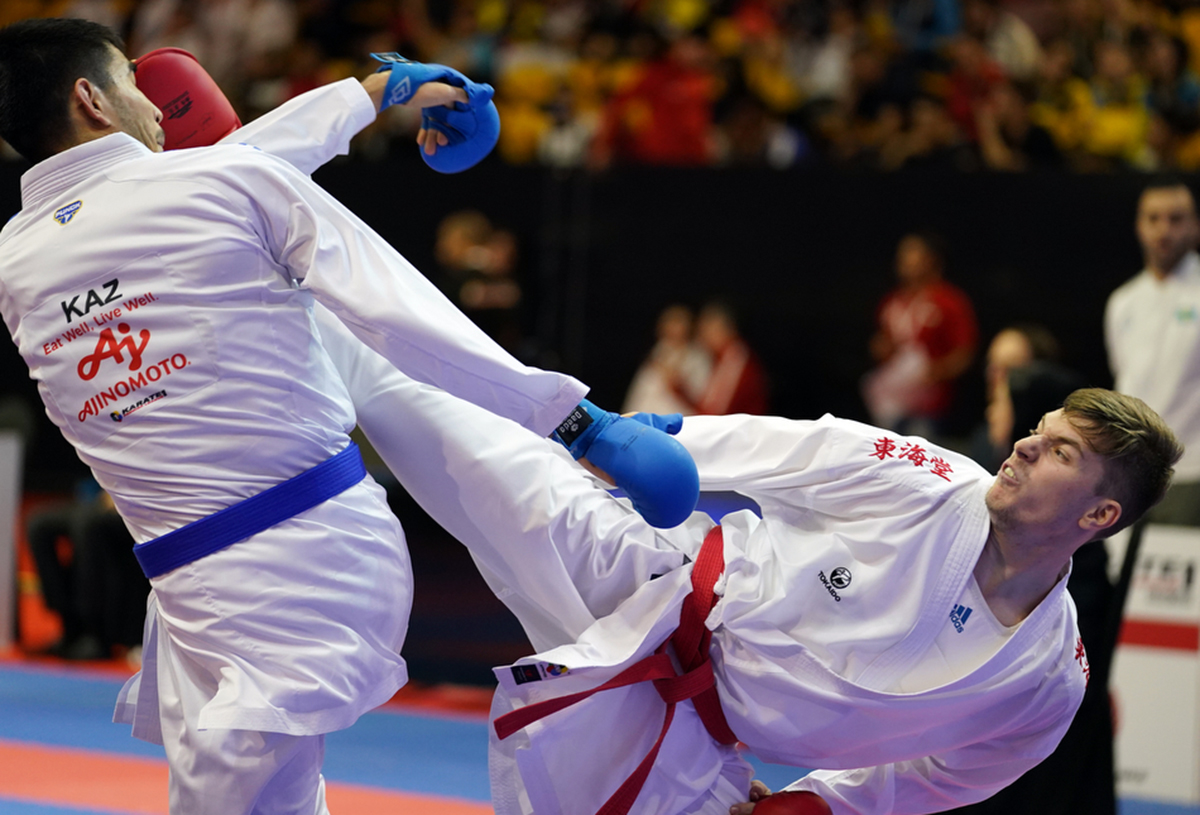 Egypt managed to place one more athlete in the finals of the event thus wrapping up an impressive day of competition. Shymaa Abouel Yazed surprised favourites in Female Kumite +68kg and qualified for her first final of Karate 1-Premier League in nearly six years. The Egyptian karateka who claimed silver at the 2014 Karate 1-Premier League Istanbul as her best result in the competition beat team-mate Menna Shaaban Okila 2-1 in an all-Egypt semi-final. The other side of the tatami in the final of the category will be taken by Meltem Hocaoglu Akyol of Turkey. It is the second final this year for the Turkish competitor who won silver in Paris. Meltem Hocaoglu Akyol beat Sofya Berultseva of Kazakhstan in semi-finals 4-1.

The competition concludes on Sunday with the bronze medal bouts and the finals. CLICK HERE to go to all the information on the Karate 1-Premier League Dubai including competition programme and results. 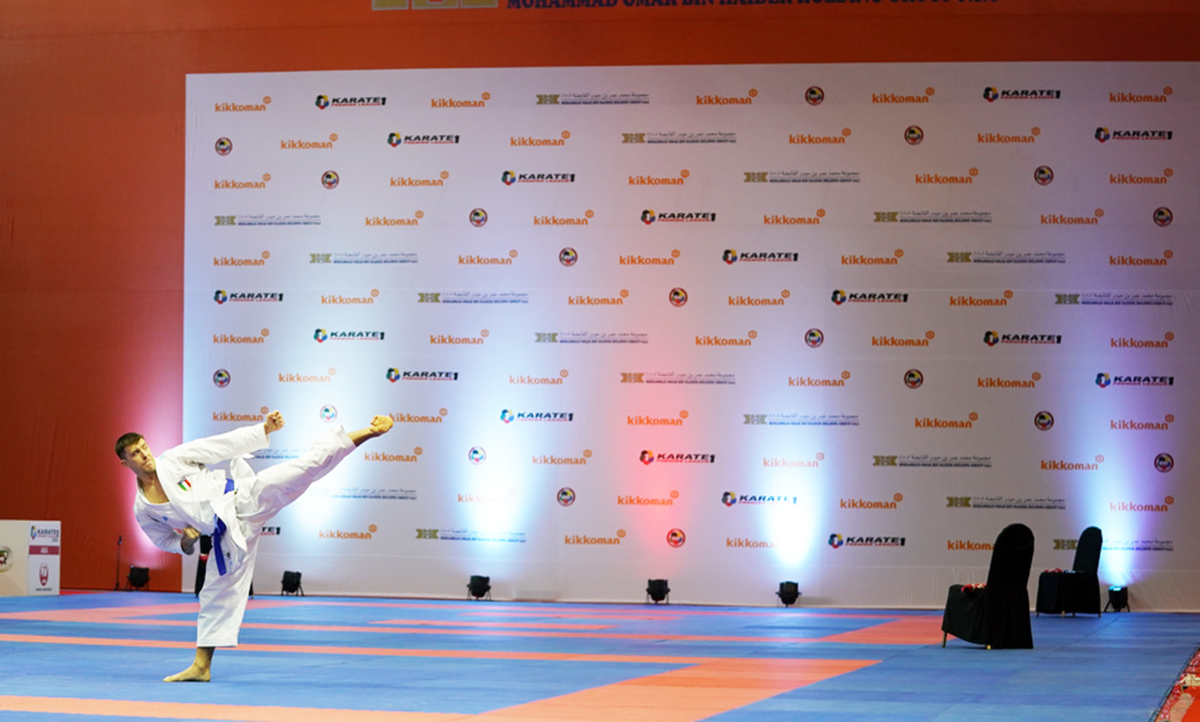