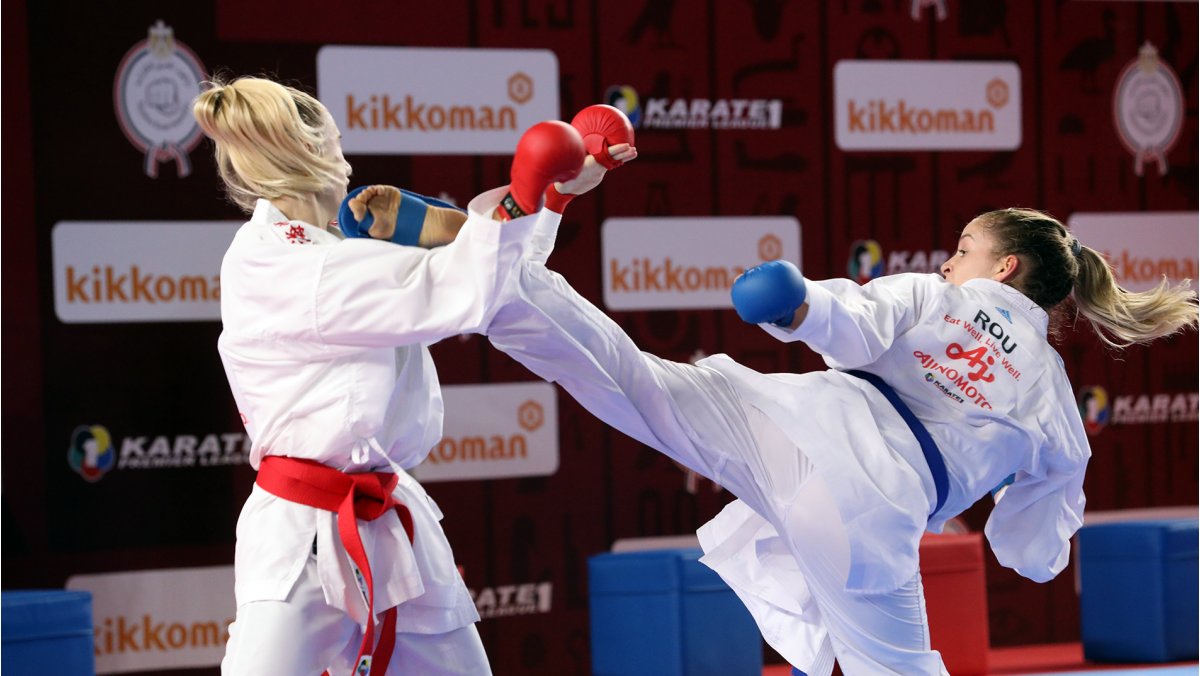 Olympic karatekas Anita Serogina and Elena Quirici were the big stars of the second day of competition of the 2021 Karate 1-Premier League Cairo. The Olympians of the sport demonstrated top form as many up-and-coming athletes left their mark today in Cairo.

After finishing in the third position of her pool at the Olympic Games, Anita Serogina of Ukraine demonstrated to continue on top form in Cairo. The EKF Championships runner-up defeated Celine Pottiez (BEL), Kanini Mulli (KEN) and Johanna-Anna Nilsson (SWE) to qualify for the final round of Female Kumite -61kg.

The list of athletes reaching the final round in this category is completed with Haya Jumaa of Canada, Noursin Aly of Egypt and Sabrina Zefino Pereira of Brazil.

Canada's Haya Jumaa returned to the final round of a Karate 1-Premier League tournament after claiming silver at the event in Salzburg last year. Jumaa who nearly made it to the Olympics with a seventh position of the Olympic standings dominated the pool with victories over Sarah Lundquist Aakerman (DEN), Miruna Mihaela Malauta (ROU), and Nina Radjenovic (SUI). 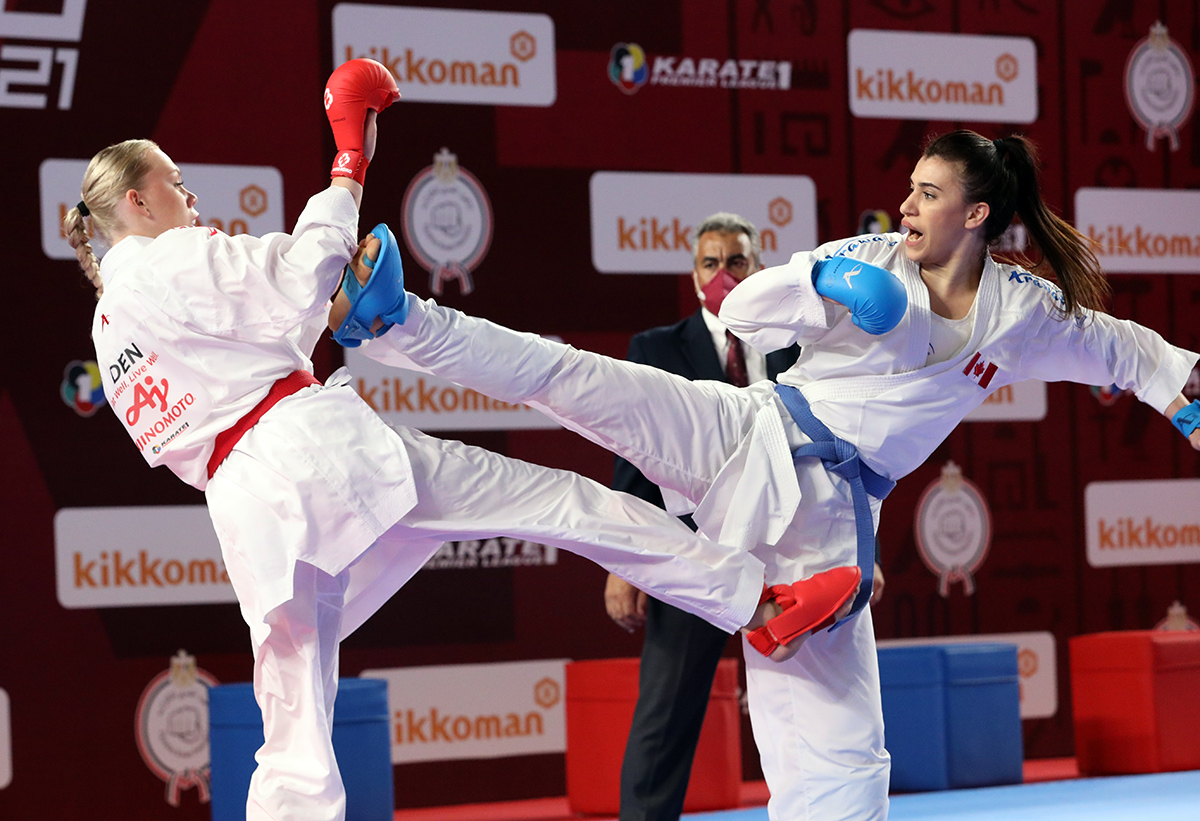 Brazil's Sabrina Zefino Pereira followed the success of her sister Carolaini yesterday and also qualified for the final round. The 2017 U21 continental champion topped the pool with victories over Giulia Angelucci (ITA), Anna Rodina (RUS) and a tie against Ingrida Suchankova (SVK).

After the outstanding performance of local karatekas on day 1, Noursin Aly continued the success of the Egyptian representatives. The 2019 Junior continental champion prevailed in her pool with triumphs over Jacqueline Factos (ECU), Diana Shostak (UKR) and a tie against Nelle de Vos (BEL).

Switzerland's Elena Quirici who finished in the third place of his pool in the Olympic Karate tournament celebrated her historic participation at the Games with a qualification to the final round of Female Kumite -68kg. The silver medallist of the Karate 1-Premier League Lisbon this year topped the pool after defeating Nesrine Bougrine (BEL) and Halyna Melnyk (UKR).

Two Ukrainian karatekas succeeded in the Round Robin of the category and claimed spots in the final round. Halyna Melnyk of Ukraine reached the final round with her second position in the pool after beating Nesrine Bougrine (BEL) and losing against Elena Quirici (SUI). The 27-year-old karateka has never won gold at the Karate 1-Premier League (silver in Rabat 2019 and Dubai 2018). 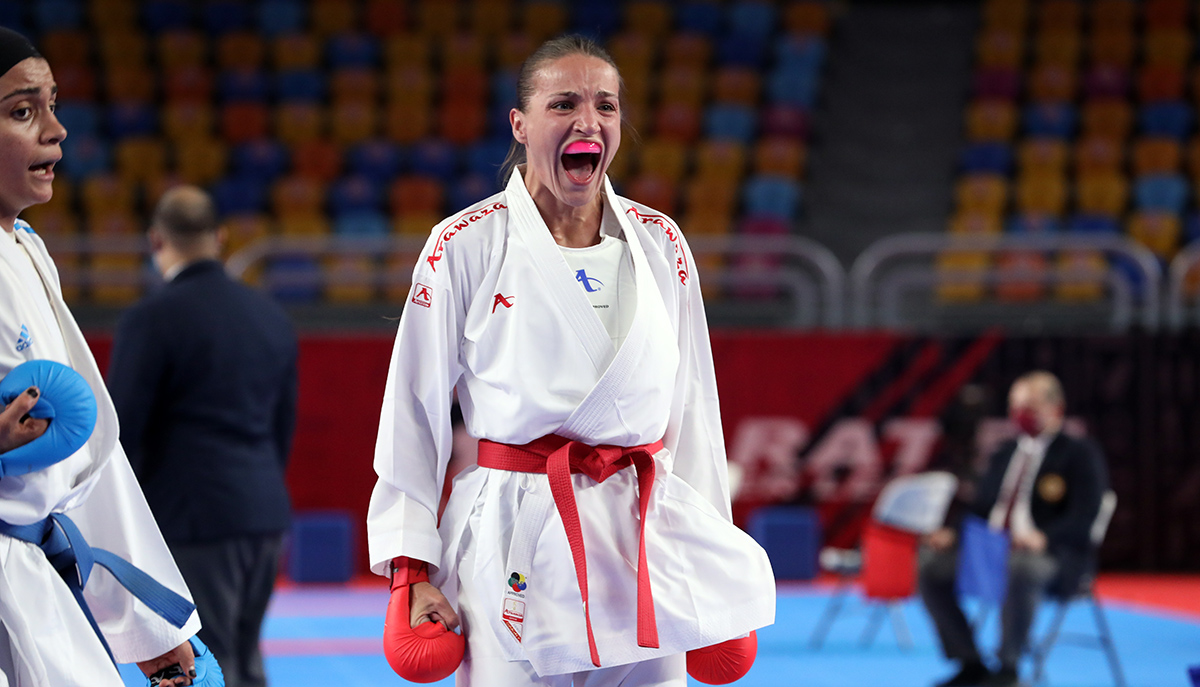 Teammate Elina Sielimienieva also finished in the second position of her pool with triumphs over Yasmin Elhawary (EGY) and Phanice Shisia (KEN) and a tie against Maryam Ajaray (MAR). Sieliminieva had never competed at the international level in senior categories and is the current U21 Continental championships bronze medallist.

The leader of pool 1 was Maryam Ajaray of Morocco. With victories over Phanice Shisia (KEN) and Yasmin Elhawary (EGY) and a tie against Elina Sielimienieva (UKR), the defending Junior continental champion reaches her first final in senior competition.

Up-and-coming karatekas took a stand in Male Kata. Gakuji Tozaki of the USA and Sakichi Abe of Japan will clash for the gold medal of #Karate1Cairo. A first-time Karate 1-Premier League finalist and ANOC Beach Games bronze medallist, Tozaki reached the final bout after topping the pool with a score of 25.94.

Meanwhile, Sakichi Abe surprised the favourites and made it to the final after dominating the pool with a score of 26.72. At only 18-years-old, Abe also reaches his first final of Karate 1-Premier League. 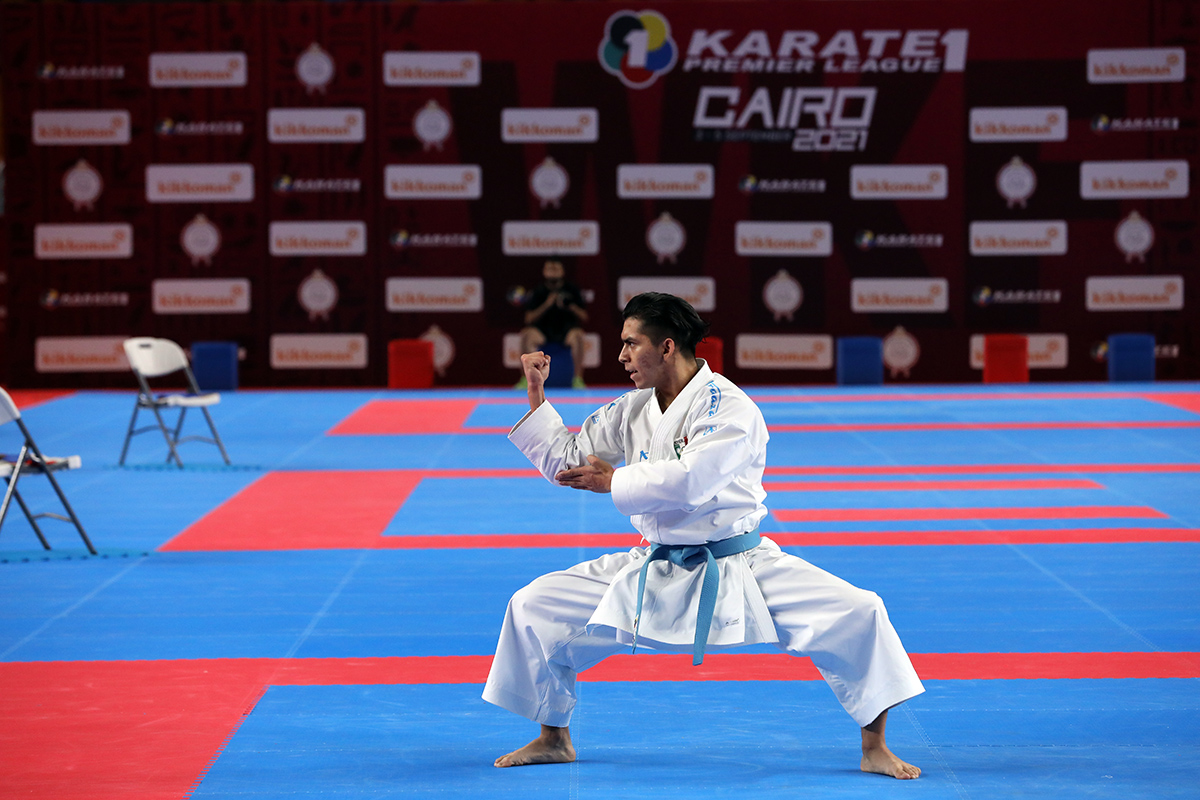 The second Egyptian representative qualifying for the final round today was Omar Ashraf Mohamed in Male Kumite -84kg. With only four international appearances under his belt Mohamed who is the 2017 World Junior Championships bronze medallist reached the final round after beating Faraj Alnashri (KSA), Kostiantyn Tsymbal (UKR), and Brian Timmermans (NED).

Teammates Youssef Badawy and Mohamed Ramadan followed suit and also qualified for the final round. Badawy who is the current U21 World Championships bronze medallist beat Andrii Toroshanko (UKR), Adi Gyurik (SVK) and Anouar Bougrine (BEL) to dominate the pool.

Mohamed Ramadan on the other hand beat Bjorn Kulovuori (FIN) and Robin Rettenbacher (AUT) and tied against Valerii Chobotar (UKR) to qualify for the final round.  The current continental championships runner-up will fight for his second medal of the season after taking bronze in Istanbul.

The last spot in the final round of Male Kumite -84kg was taken by Walid Deghali of Belgium. In his first final of Karate 1-Premier League, Deghali claimed victories over Filipe Alberto (BRA), Vlad Iorga (ROU), and Tomas Kosa (SVK). 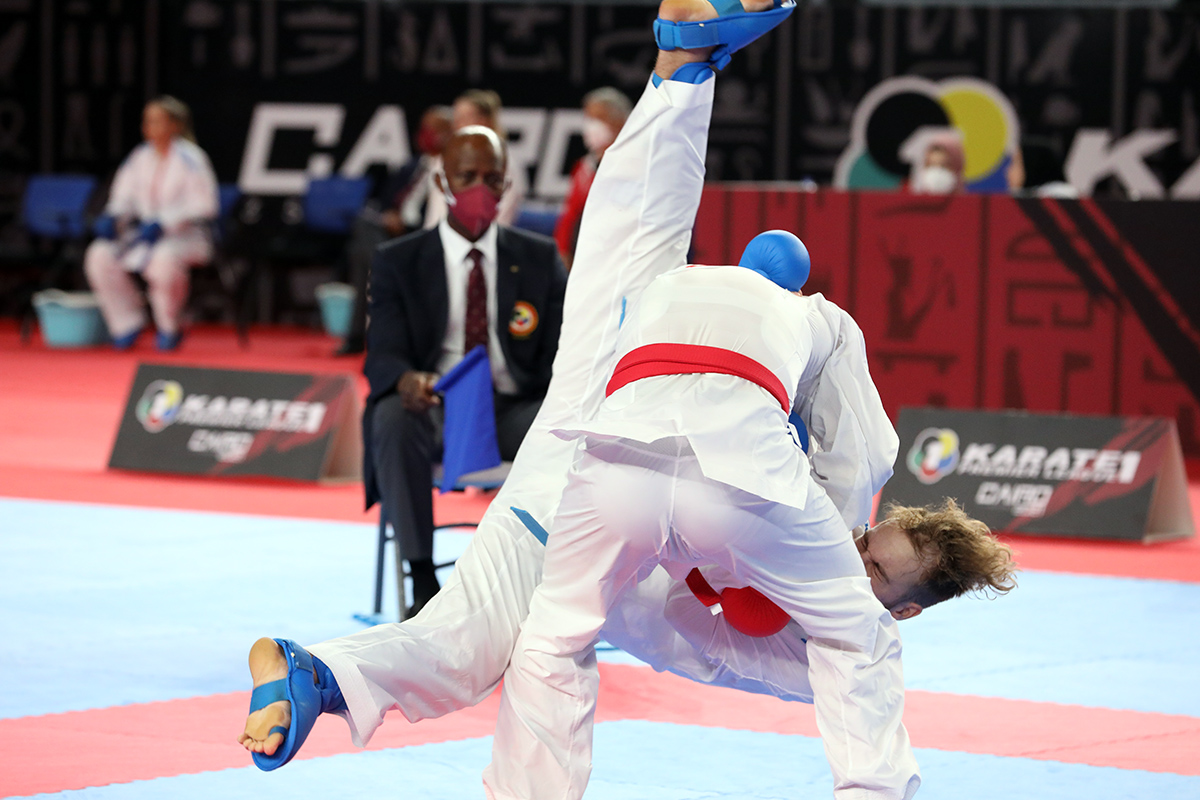 Two more Egyptian karatekas made it to the final stages as Taha Tarek Mahmoud and Hazem Ahmed Mohamed took the category of Male Kumite +84kg by a storm.

Meanwhile, Hazem Ahmed Mohamed finished in the second position of pool 3 after claiming triumphs over Ihor Lahunov (UKR) and Danil Kamyshov (RUS) and a defeat against Luca Costa (BEL). 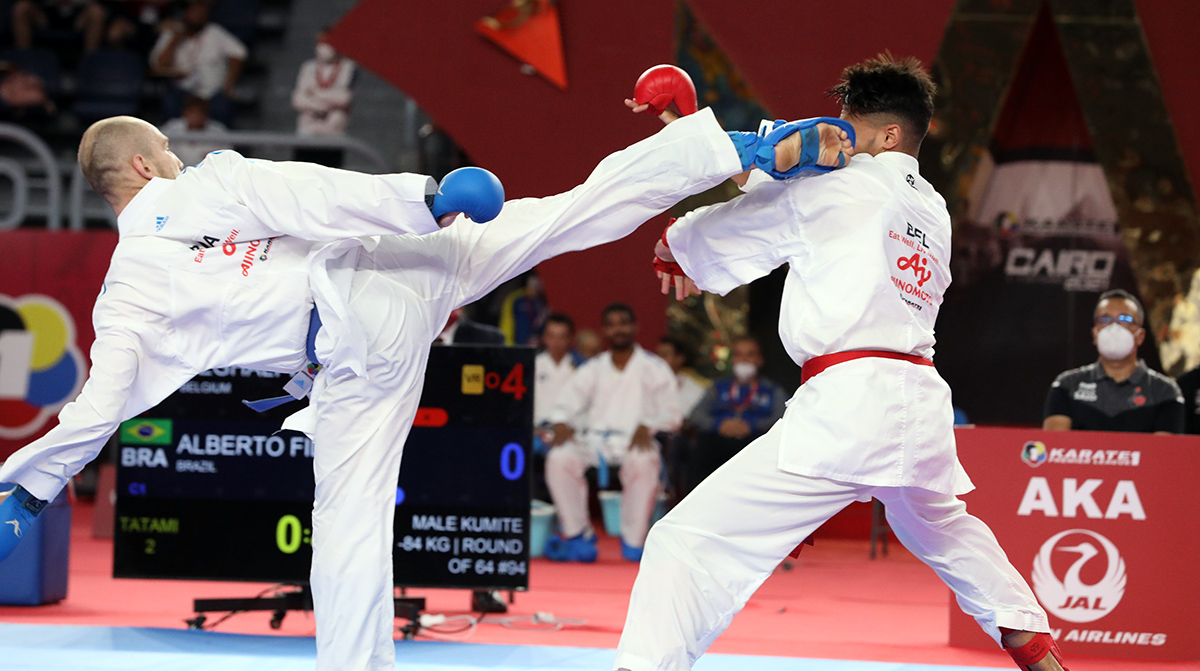 Two of the most successful delegations in this event ? Ukraine and Egypt ? will go home with two more medals as the title in Female Kumite +68kg will have Ukraine?s Anastasiya Stepashko and Egypt?s Sohila Abouismail as contenders.

The final will be a repetition of the title-deciding clash of the 2016 Karate 1-Premier League Sharm El Sheikh, the last event of its kind in Egypt. The gold medal in the final bout five years ago went for Stepashko.

Spain vs Brazil in Female Team Kata complete the list of finalists of the day.

The medals of the Karate 1-Premier League Cairo will be decided on the last day of the competition on Sunday.