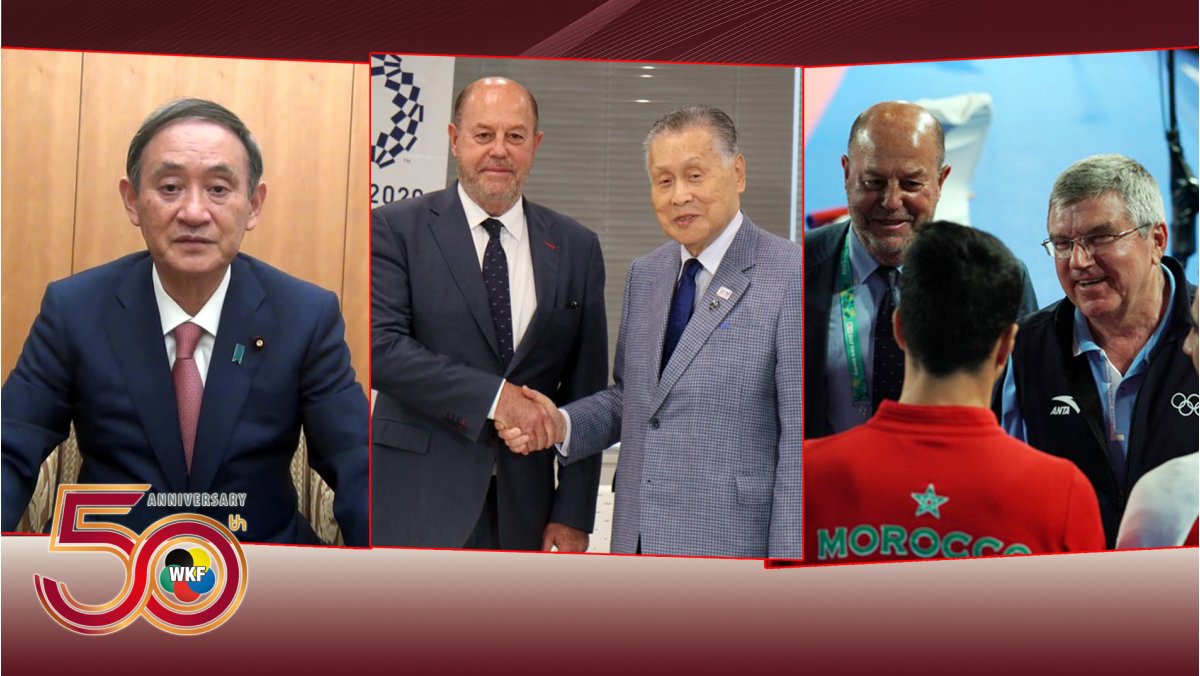 The World Karate Federation is celebrating the 50th anniversary of the creation of the organisation and many personalities and sports officials are congratulating Karate’s international governing body on the milestone.

The World Karate Federation is celebrating the 50th anniversary of the creation of the organisation and many personalities and sports officials are congratulating Karate’s international governing body on the milestone. Japan Prime Minister Yoshihide Suga, Tokyo 2020 President Yoshiro Mori, and IOC President Thomas Bach are among the dignitaries praising the WKF for reaching five decades of history.

As Karate is getting ready to make its Olympic debut in the Olympic Games Tokyo 2020, the WKF received the best wishes from the Prime Minister of Japan Yoshihide Suga. A black belt in Karate and a follower of the sport, Mr Suga highlighted his experience in the discipline in a video message sent to the WKF.

“I trained my mind and body in Karate during my time at the university and this discipline has been a big support in my life over the years. As a deep lover of Karate, I look forward to witnessing the historic moments of Tokyo 2020 with all of you", added Mr Suga. “I wish the World Karate Federation all the success in its future endeavours and all the best for all the Karate family.”

“(The Olympic Games) must be a unique opportunity to spread the value and traditions of Japanese martial arts to the world through the showcase of Karate as a universal sport,” said Japan’s Prime Minister. 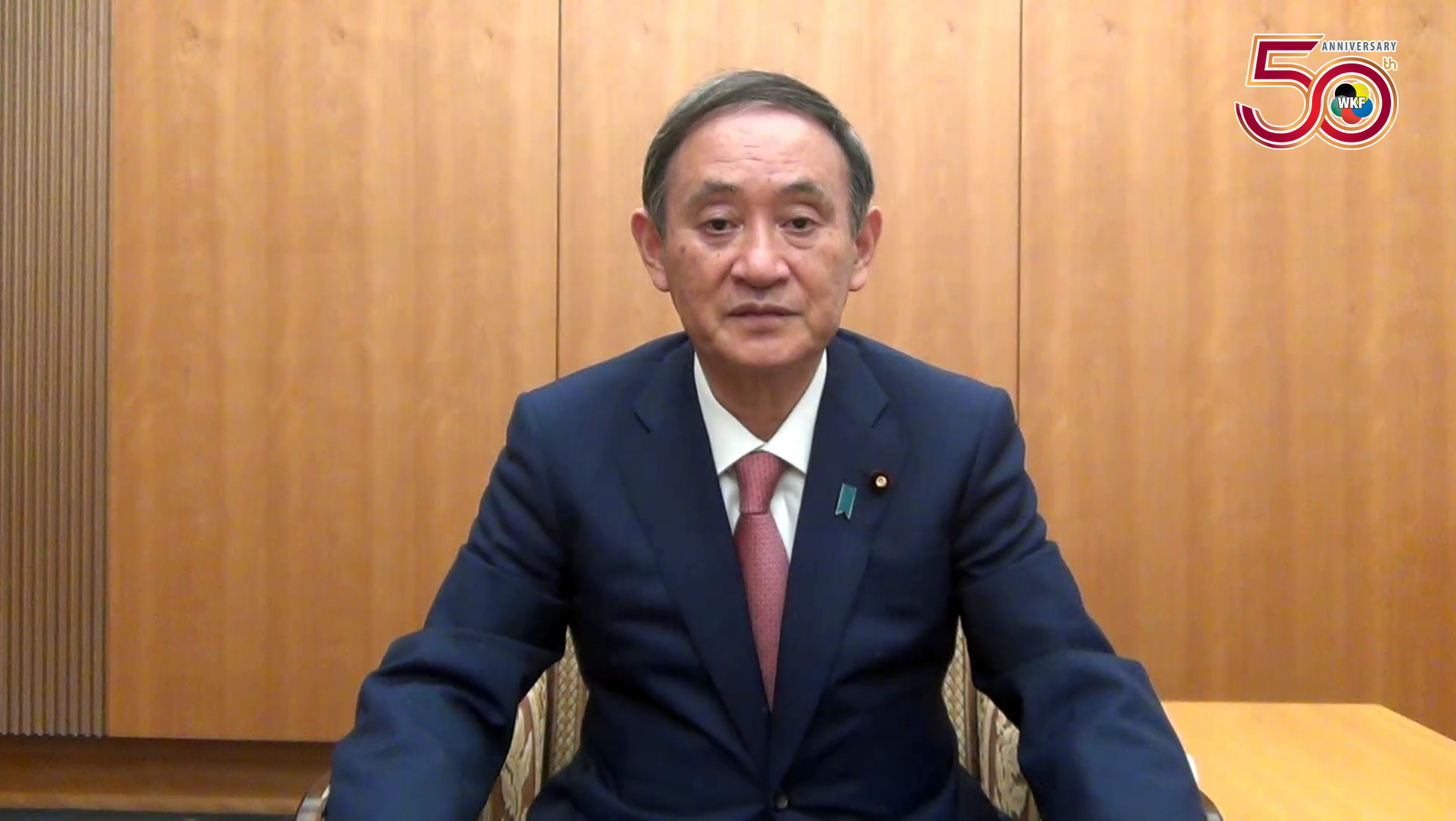 Thomas Bach: “Extraordinary growth and development of Karate in the world”

IOC President Thomas Bach sent a congratulatory message to the WKF stating that Karate’s international organisation “can look back with pride on a period of extraordinary growth and development of Karate in the world,” said Mr Bach.

“The close partnership that the IOC enjoys with the World Karate Federation has continued to grow and strengthen. As we have seen during the unprecedented situation that the world is currently facing with the global coronavirus crisis, we are always stronger together. The IOC is privileged to have reliable partners like the World Karate Federation at our side as we promote the role of sport as an essential factor in fighting the pandemic and as an integral part of the solution for the crisis recovery,” added IOC President in the letter of congratulation.

The head of the International Olympic Committee stressed the importance of Karate’s first Olympic appearance in Tokyo as a showcase of the impact of sports in society. “The Olympic Games Tokyo 2020 next year will be an even more significant occasion to highlight your 50th anniversary and to celebrate the power of sport at the home of Karate in the historic Nippon Budokan,” stated Mr Bach. 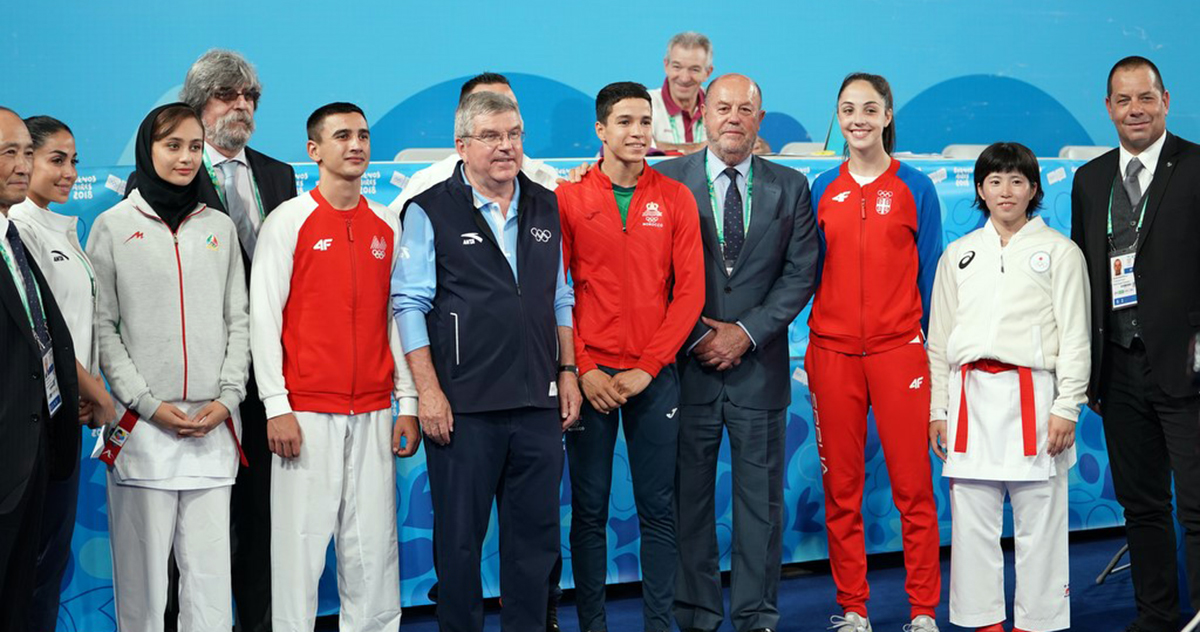 Yoshiro Mori: “The flame of Karate will continue to burn in our hearts until the Tokyo 2020 Olympic Games next summer”

The President of the Tokyo 2020 Olympic Games Organising Committee Yoshiro Mori highlighted the expectations ahead of Karate’s Olympic presentation next year in a message sent to the WKF.

“Since August 2016 and the 129th IOC Session in Rio where Karate was approved as one of the additional events in the package for the Tokyo 2020 Olympic Games, our excitement remains unabated,” said Mr Mori.

“Japan is the birthplace of Karate, and its joining of the Olympic Games in Tokyo, along with the spread of global excellence, with strong ties to Japan and Japanese culture, will ensure a positive legacy for Japan, the Olympic Games and Karate,” added the Tokyo 2020 President.

The World Karate Federation was created on October 10th, 1970 in the inaugural congress which was held in Tokyo (Japan) on the eve of the first edition of the World Championships. To celebrate the historic moment, the WKF is launching several initiatives and a digital campaign.

“It is an honour to have received the warm and thoughtful messages of personalities such as Mr Suga, Mr Mori and Mr Bach, among others. I highly appreciate their kindness and consideration. On behalf of all the karatekas around the world, I thank them for their support and their kind wishes. I am sure that with their cooperation, our sport will continue reaching new heights and that we will make the most of our Olympic debut next year in Tokyo,” said WKF President Antonio Espinós.

Heads of federations, sports officials and Karate fans around the world have also congratulated the World Karate Federation on WKF’s 50th anniversary.