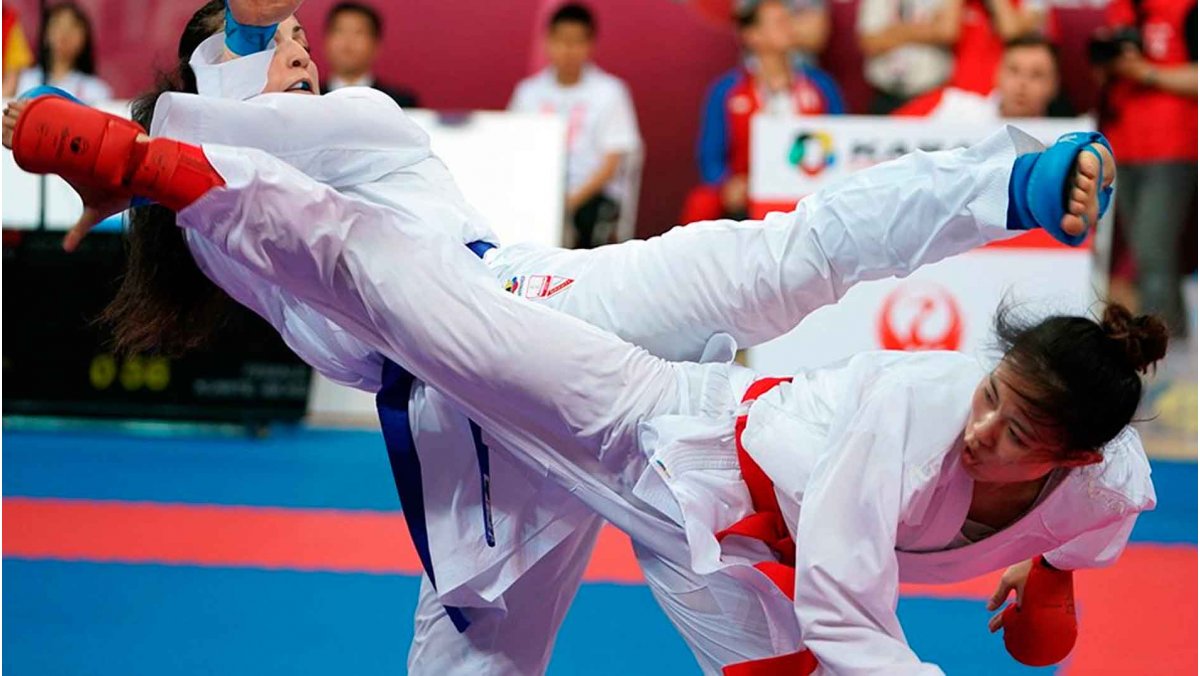 The host nation of the Karate 1-Premier League Shanghai enjoyed a successful second day of competition as the representatives of the organising country reached three finals today. Spearheaded by Xiaoyan Yin, the remarkable performance of the Chinese delegation was one of the highlights of the thrilling second day of action in Shanghai.

Hosts of China enjoyed a successful second day of competition of the Karate 1-Premier League Shanghai as the representatives of the organising country reached three finals today. Spearheaded by Xiaoyan Yin, the remarkable performance of the Chinese delegation was one of the highlights of the thrilling second day of action in Shanghai.

Chinese representatives had celebrated Jiamei Ding’s qualification to the finals on the first day. Hosts saw their top athletes also succeeding at home on the second day since Xiaoyan Yin, Mengmeng Gao and Li Gong qualified for the title-deciding bouts in Female Kumite -61kg, Female Kumite +68kg and Female Kumite -68kg respectively. Xiaoyan Yin defeated Italy’s Laura Pasqua with a late “Yuko” in semi-finals (1-0) to make it to her second final of Karate 1-Premier League this year. 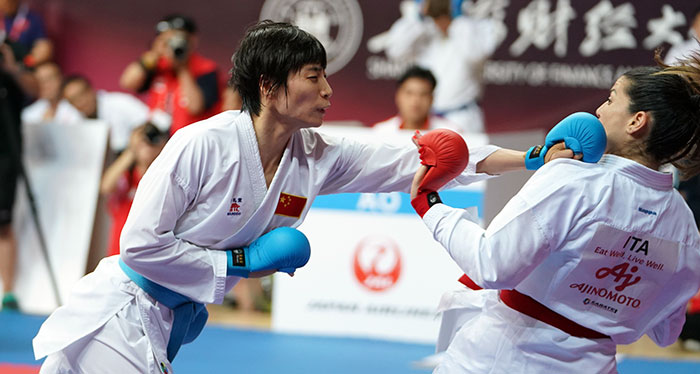 The other spot in the final of Female Kumite -61kg is for Jovana Prekovic of Serbia. The current World champion used her front-runner status to take a convincing 5-1 victory over Japan’s Mayumi Someya to qualify for her first final of the season. The title-deciding bout will be a repetition of the gold medal clash in the last World Championships.

Meanwhile, in Female Kumite -68kg Li Gong shocked favourites following an impressive 6-0 victory in semi-finals over Vicky Panetsidou of Greece. The winner of the 2018 Karate 1-Series A Shanghai has never made it to the finals of Karate 1-Premier League and will try to use the support from the stands in the decisive bout against Grand Winner Alizee Agier from France. The French star performed at an outstanding level and aims at her the second gold medal this year after her triumph at the European Championships. The defending continental champion took an impressive 5-0 victory over Elena Quirici of Switzerland in semi-finals to reach the title-deciding bout. 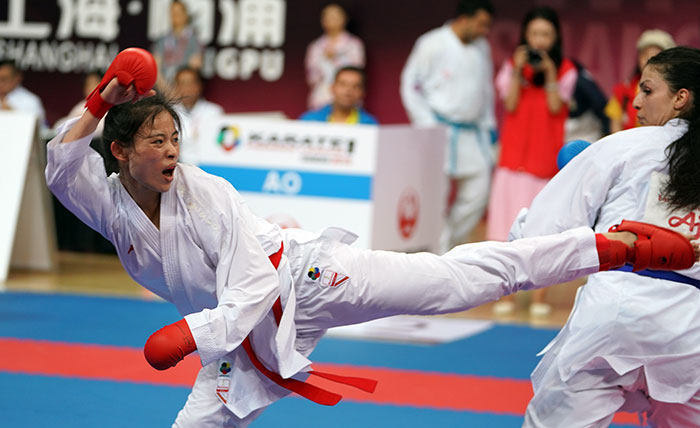 The successful day for hosts was completed with Mengmeng Gao’s triumph in Female Kumite +68kg. The silver medallist of 2018 Karate 1-Series A Shanghai edged Italy’s Clio Ferracuti in semi-finals 1-0 and will compete for her first medal in Karate 1-Premier League in over two years.

Also claiming a surprising qualification for the finals, Sofya Berultseva of Kazakhstan shocked favourites and won the ticket to her first-ever title-deciding bout in Karate 1-Premier League after claiming a 5-3 triumph over Grand Winner Ayumi Uekusa of Japan.

JAPAN VS SPAIN FOR KATA DOMINATION

Just as it happened in Female Kata, representatives of Spain and Japan will clash for gold in Male Kata. Ryo Kiyuna and Damian Quintero will compete for the domination of the category after prevailing in the previous rounds today. World champion and current Grand Winner Kiyuna topped his pool with “Anan Dai” kata and a score of 26.68 while European champion Quintero also used “Anan Dai” to dominate the pool (score of 26.94). It is the fourth time in four events this year that the two front-runners of the category will compete for gold. 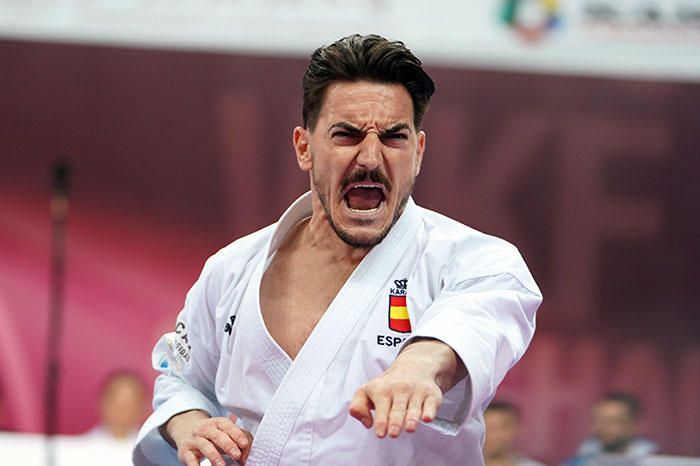 Grand Winner Ugur Aktas continues taking the spotlight at Karate 1-Premier League events as the Turkish fan favourite qualified for his second final this season. The current European champion who has taken medals in six of the seven events this year beat Mahdi Ghararizadeh Mahani of Iran in semi-finals 2-0.

“I am very happy about winning the match and going to the final because I could only get bronze at the last tournament in Rabat. Now, I want to do my best to succeed in the final and win the gold medal here,” said Ugur Aktas.

World champion Ivan Kvesic awaits on the other side of the tatami in the final. The Croatian karateka reached his first final this year after claiming a convincing 6-3 triumph over Iran’s Zabiollah Poorshab in semi-finals. 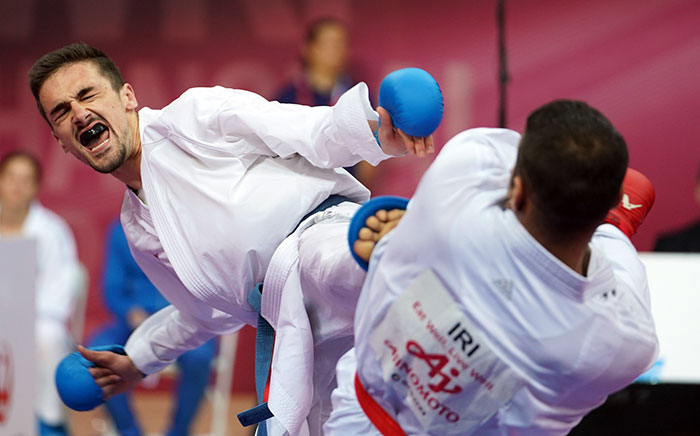 The last bout in Male Kumite +84kg will see an all-Iran confrontation since Saleh Abazari and Sajad Ganjzadeh will clash for gold. Abazari who has claimed medals in five of his six appearances this year upset Grand Winner Jonathan Horne of Germany 1-0 in semi-finals while team-mate Ganjzadeh defeated Gogita Arkania of Georgia 2-1 in semi-finals and will fight for his fourth medal this year.

The winners of Karate 1-Premier League Shanghai will be decided on Sunday. All the medal bouts of the thrilling event will be streamed LIVE on karateworld.tv 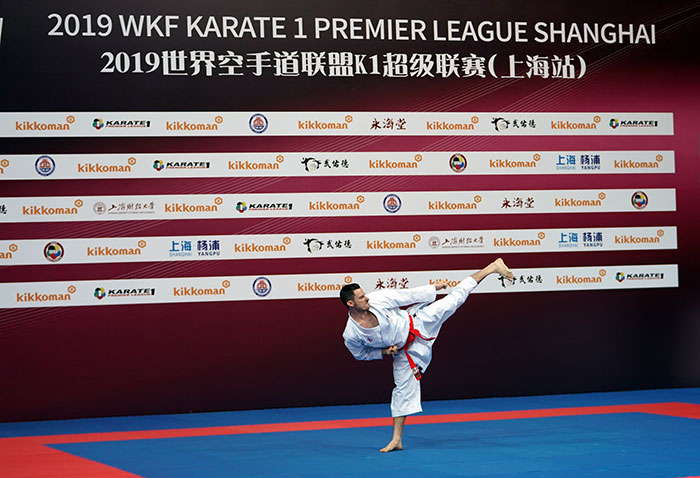