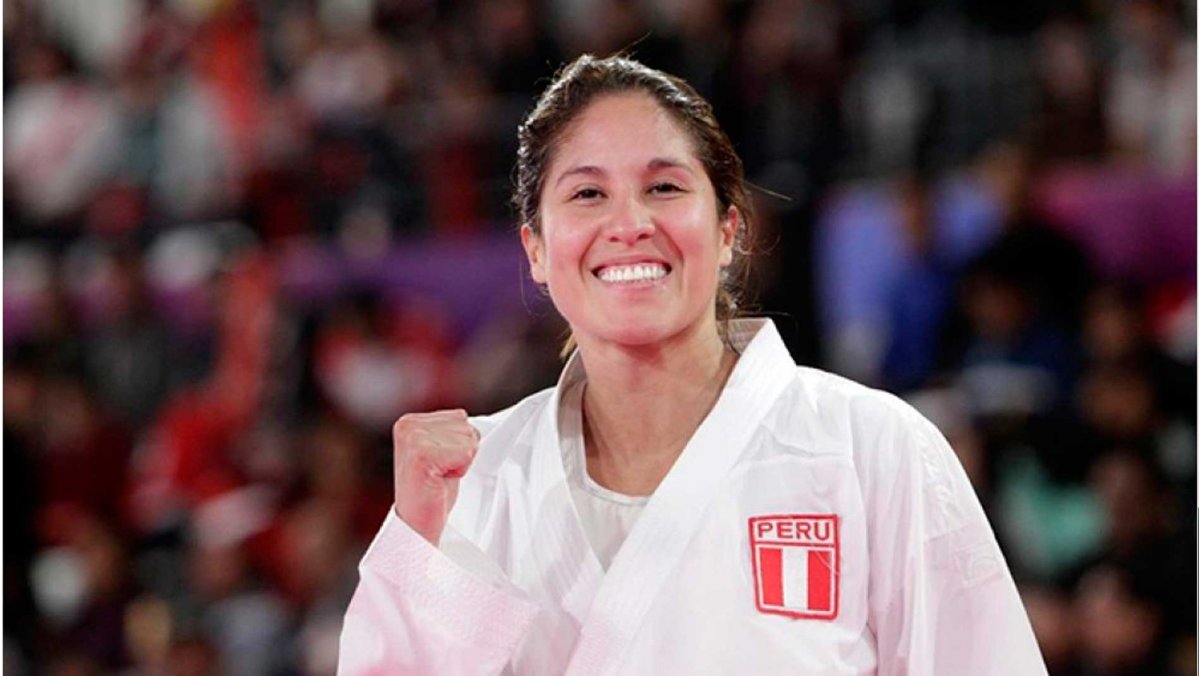 Peru’s Alexandra Grande became the big star of the second day of Karate competition at the Pan American Games. The local fan favourite gave hosts plenty of reasons to celebrate as she took the second gold medal for the organising ry in the Karate tournament in Lima.

Peru’s Alexandra Grande became the big star of the second day of the Karate competition at the Pan American Games. The local fan favourite gave hosts plenty of reasons to celebrate as she took the second gold medal for the organising ry in the Karate tournament in Lima.

With the support of a full Polideportivo Villa El Salvador in Peru’s capital, top-ranked Peruvian karateka Alexandra Grande used the home-ground factor in her favour to claim a much-celebrated gold medal in Female Kumite -61kg. Alexandra Grande, who defended the title of Pan American Games champion at home, demonstrated an outstanding level and took the flag of the organising nation to the top of the podium. The current title-holder and Ambassador of Lima 2019 defeated Venezuela’s Claudymar Garces by 6-1 after completing six “Yuko” by one “Yuko” of her rival. It is the fourth medal for Grande this year after her victory at the Karate 1-Series A Montreal, the second place at the Karate 1-Series A Istanbul and the bronze medal at the continental championships.

Representatives of the USA also took the spotlight on the second day of Karate action in Lima since karatekas of the North American ry claimed two gold medals today. Shannon Nishi opened the gold medal for the American powerhouse nation after prevailing in Female Kumite -50kg. The 34-year-old athlete who is placed in the 31st position in WKF World Ranking surprised front-runners and became the new champion of the Pan American Games following a 2-0 victory over Mexico’s Alicia Hernandez.

Brian Irr took the second gold for team USA in Male Kumite +84kg. The current Pan American bronze medallist fought his way to the top of the podium with an impressive performance in Lima and a conclusive 5-0 victory over Canada’s Daniel Gaysinsky in the final. Irr connected one “Wazari” and one “Ippon” to take the crown.

Karatekas from the USA had one more chance to increase their gold medal today but Kamran Madani lost the final of Male Kumite -84kg against Carlos Sinisterra of Colombia. The Colombian karateka who had the bronze at the 2016 Pan American Championships as his best result shocked favourites and defeated Madani in the final by a slim 1-0.

In a day of historic performances in Lima, Valeria Kumizaki of Brazil increased her tally of awards and confirmed her domination of the Female Kumite -55kg category. The front-runner of the division was the current title-holder as she had prevailed in the last edition of the Pan American Games four years ago.

It was history repeating at the Pan American Games: the final of the category had the same two contenders as the title-deciding bout four years ago. The result was also the same since Valeria Kumizaki upset Kathryn Campbell of Canada, just as it happened in 2015. In Lima, the seventh-ranked karateka in WKF World Ranking from Brazil took the crown after completing four “Yuko” by one “Yuko” for Campbell to a final 4-1.

The Karate competition continues on Sunday with the final day of action from Lima and the last of the categories at stake.