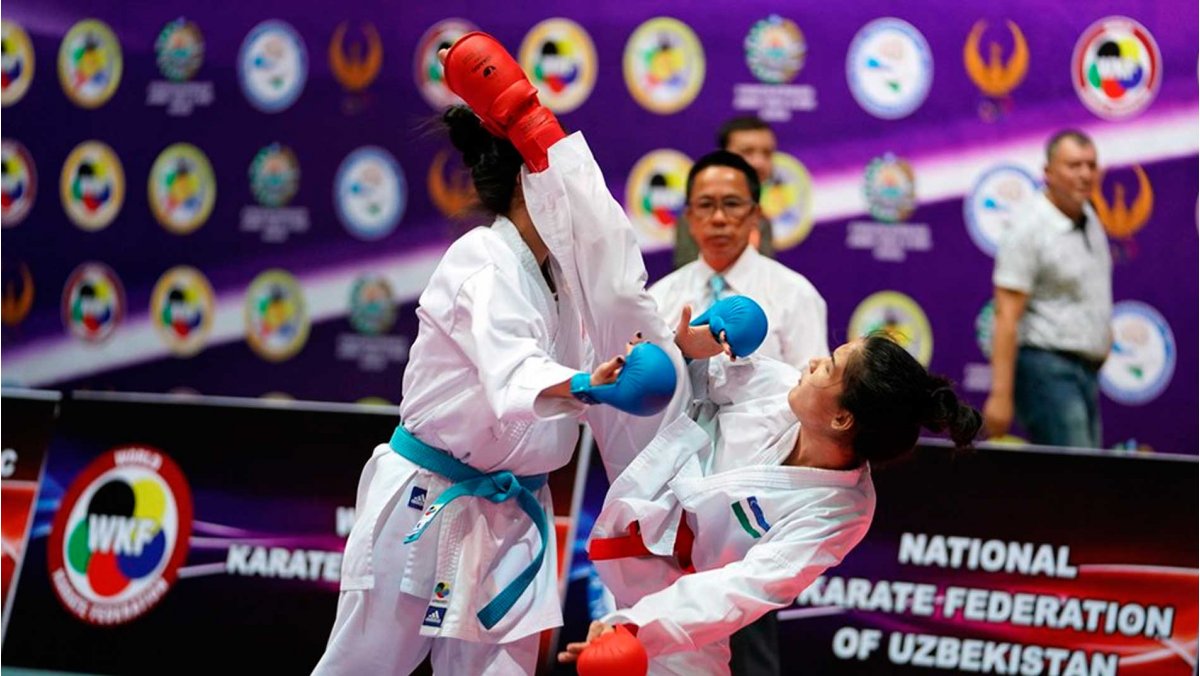 The 2019 AKF Senior Championships started in Tashkent (Uzbekistan) with favourites leaving their mark in the opening day. Miho Miyahara, Xiaoyan Yin, and karatekas from the host ry took the spotlight in the first day of competition.

The 2019 AKF Senior Championships started in Tashkent (Uzbekistan) with favourites leaving their mark in the opening day. Miho Miyahara, Xiaoyan Yin, and karatekas from the host ry took the spotlight on the first day of competition.

The thrill of the quest to medals in Tashkent begun at the Sports Complex "Uzbekistan" with the first categories at stake. The competition was opened with Female Kata; Kiyou Shimizu of Japan and Lau Mo Sheung Grace of Hong Kong confirmed their favourite status taking the highest scores in the first pool.

The Male Kata category also saw favourites taking a stand. Three-time World champion and defending title-holder Ryo Kiyuna of Japan claimed the highest score of the first round while the other pool of the first round was topped by Heejun Park of Republic of Korea

The competition in Male Kata and Female Kata continues Saturday with the rest of the rounds. 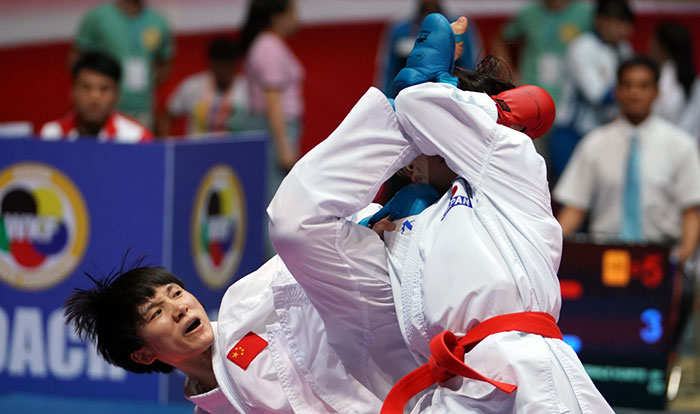 The opening day also saw Miho Miyahara of Japan claiming star status. The current World champion qualified for the final of Female Kumite -50kg thus taking a step in her goal to retain the title. The 2018 continental champion beat Ranran Li of China 5-3 in semi-finals.

Her rival in the title-deciding bout will be Bakhriniso Babaeva of Uzbekistan who achieved the first success for the host ry with her qualification to the final. It will be the second final ever for the promising karateka who surprised favourites and defeated Shiau-Shuang Gu of Chinese Taipei 5-0 in semi-finals.

The second final spot for hosts was taken by Sevinch Rakhimova in Female Kumite -55kg. The Uzbek karateka upset Siti Nur Azwani Nor Azli of Malaysia 2-0 in semi-finals to make it to her first final in her second international appearance. The other finalist in this category is Travat Khaksar of Iran who beat opened the successful day for representatives of the powerhouse nation of the sport.

Much to the celebration of fans of the organising ry, local star Sadriddin Saymatov also took the flag of the host nation to the finals. The former Grand Winner who is the most promising Uzbek karateka did not disappoint and reached the last bout in Male Kumite -60kg after defeating Kuwait?s Abdullah Shaaban 5-4. 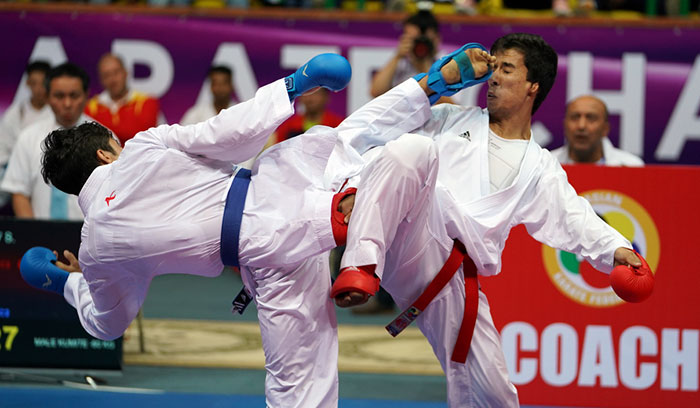 Saymatov will clash for gold against Kyrgyzstan?s Rafael Akbarov who shocked with his first qualification to a final in international competitions. The karateka from Kyrgyzstan beat China?s Boxiang An in semi-finals.

The outstanding performance of local karatekas today was wrapped up by Nodira Djumaniyazova who made it to the final of Female Kumite -68kg. The representative of the host ry claimed a convincing 7-4 victory in semi-finals over Jou Chao of Chinese Taipei. Her rival in the final will be Ceyco Georgia Zefanya of Indonesia who upset favourite Kayo Someya of Japan in a sensational semi-final 12-8.

In an outstanding demonstration of abilities, China?s Xiaoyan Yin became one of the big names of the opening day. The current continental champion demonstrated great superiority and qualified for the final of Female Kumite -61kg after registering 16-0 in three bouts including an 8-0 victory over Chinese Taipei?s Yan-Yi Yu in semi-finals.

The other finalist of the category is Rozita Alipourkeshka of Iran. The Iranian representative edged Ayami Moriguchi of Japan in semi-finals by ?Hantei? or decision and qualified for her second final in six years. 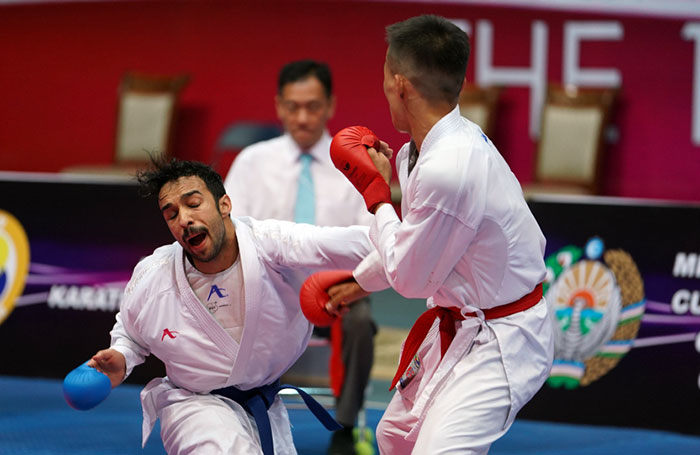 Iran also made it to two more finals. In Female Kumite +68kg, Hamideh Abbasali will fight for gold after taking a conclusive 9-0 victory over Yan Kai Ho of Hong Kong in semi-finals. The other spot in the final of this category is for Kazakhstan?s Sofya Berultseva who will try to continue the success she had in Karate 1-Premier League Shanghai with another gold medal.

Meanwhile, Zabiollah Poorshab demonstrated top form and qualified for the title-deciding bout in Male Kumite -84kg. The current World Championships bronze medallist beat Kuwait?s Mohammad Almijadi in semi-finals by ?Hantei? or decision and will clash for gold against Jordan?s Mahmoud Sajan who also took a victory by ?Hantei? over favourite Ryutaro Araga of Japan. 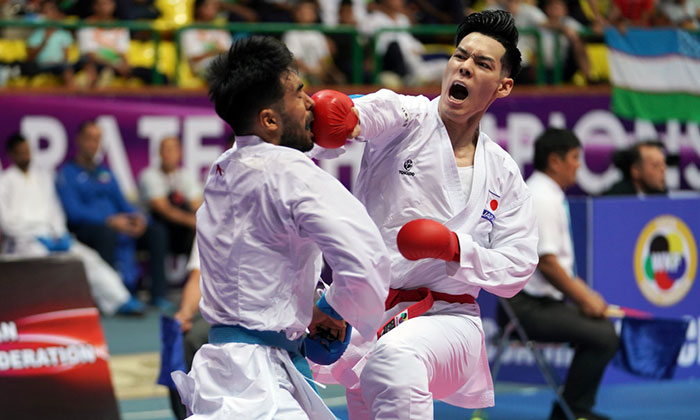 Saudi Arabia?s Abdulaziz Alhakami was the surprising other finalists in this category. The young karateka had only reached the final of one major international event, in the 2016 Karate 1-Premier League Okinawa. He made it to the title-deciding bout following an impressive 9-5 victory over Kuwait?s Omar Alajenaei in semi-finals. 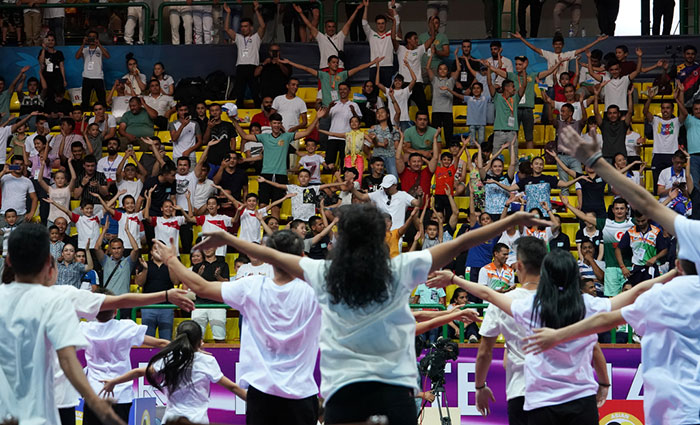