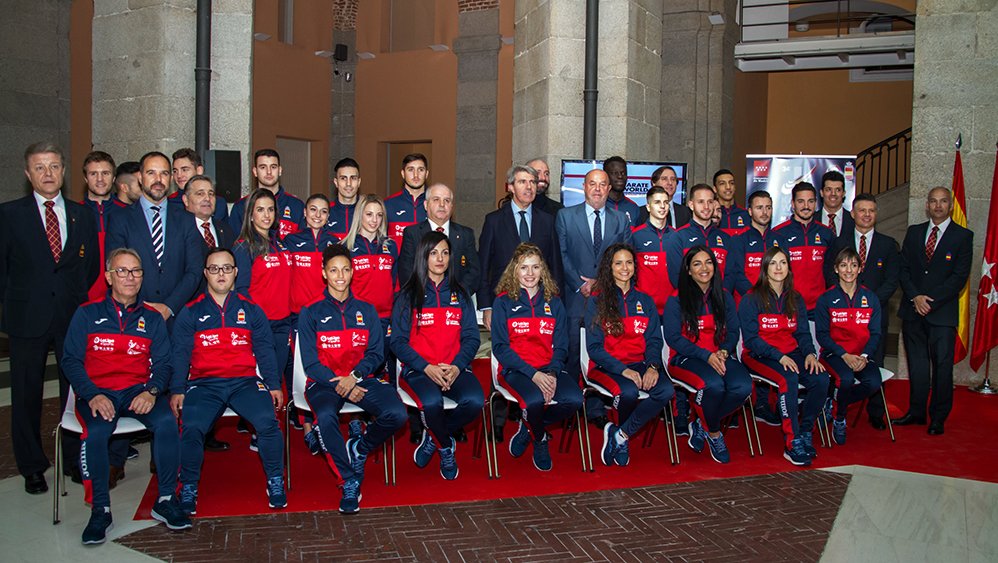 The 24th Karate World Championships were officially presented on Monday in Madrid. The ceremony was held at the headquarters of the Madrid region in the capital city of Spain, and it showcased the support of the authorities to the tournament taking place at the WiZink Center sports hall from November 6 and 11.

The 24th Karate World Championships were officially presented in Madrid. The ceremony was held at the headquarters of the Madrid region in the capital city of Spain, and it showcased the support of the authorities to the tournament taking place at the WiZink Center sports hall from November 6 and 11.

“We are very proud to host another first-class international event. Now, we are welcoming the Karate World Championships, and this shows that Madrid is at the top of all the most important sports events,” said the president of the Madrid region Ángel Garrido.

“The support to the practise of sport is a priority of the government of the Madrid region. We are engaged in countless actions to achieve this goal; in Madrid we do not make a difference of ages, genres, capacities or sports disciplines; this time around I would like to point out the many values of Karate: balance, precision, perseverance, and above all, discipline and respect to others,” said Mr Garrido. 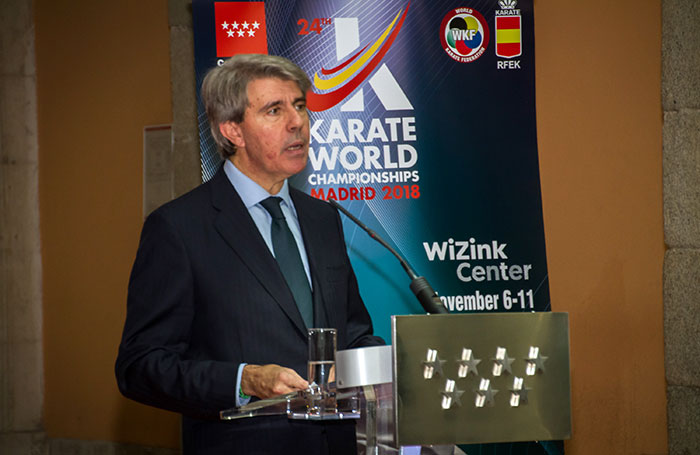 “Karate will be making its debut as an Olympic sport in Tokyo 2020 and there is no better stepping stone that these World Championships in Madrid. We hope that this event will be one of the best in history. Madrid is with all of you and Madrid will always be supporting each one of you,” said the regional president making a reference to the athletes on site.

WKF President Antonio Espinós stressed the records that the event is already breaking and defined the 2018 World Championships as “the most important tournament” of its kind.

“We would not be here today if it wasn’t for the support of the government of the Madrid region. The Karate world will always be thankful to the Madrid region for giving us the opportunity to host this event in Madrid,” said WKF President Antonio Espinós.

“It means so much to me on the personal level that this event will take place in Spain, in my country. It is the fourth time that the Karate World Championships are being held in Spain, but this time it will be extremely special,” added the Spaniard. 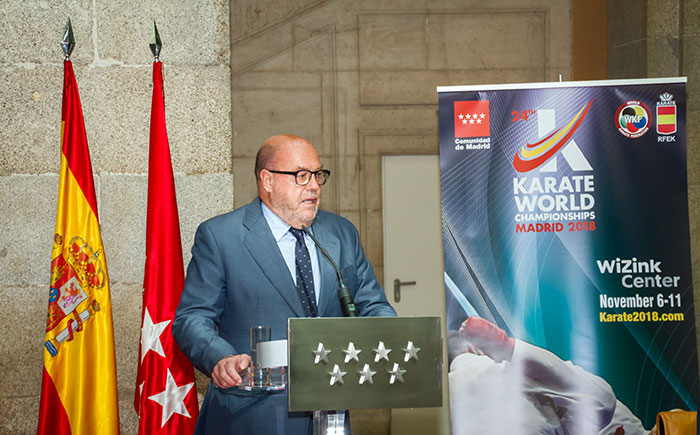 “Never before in the history of Karate has an event like this been so important. This edition of the World Championships is the last one before the debut of our sport in the Olympic Games Tokyo 2020 and it is the tournament providing a higher point count for the Olympic standings. So, these World Championships will be a perfect prelude of the Karate competition at the Olympic Games. I hope all Karate fans will be able to enjoy this unique and historic event,” stated Mr Espinós.

ANTONIO MORENO: “MADRID WILL BE THE STARTING POINT OF ATHLETES IN THE QUALIFICATION TO TOKYO 2020”

Meanwhile, the President of the Spanish Karate Federation Antonio Moreno pointed out the transcendence of acting as hosts of the tournament.

“It makes me very proud, as president of the Spanish Karate Federation, to enjoy this event which will be the most important Karate World Championships in the history of the sport. It is so important that it will be the starting point of many athletes in their quest to qualify for the Olympic Games Tokyo 2020. For a sport like ours, to be included in the Olympic programme means that the level of our athletes will continue growing exponentially,” said Antonio Moreno.

“We hope that we will add more medals to all the awards that we have won in World Championships in the past, especially when those events were held in Spain. Karate in Spain is experiencing memorable moments, and we are proud to be a powerhouse of the sport, with athletes as representative as World ranking leader Sandra Sanchez and second-place in World Ranking Damian Quintero, among others,” added the president of the Spanish Karate Federation. 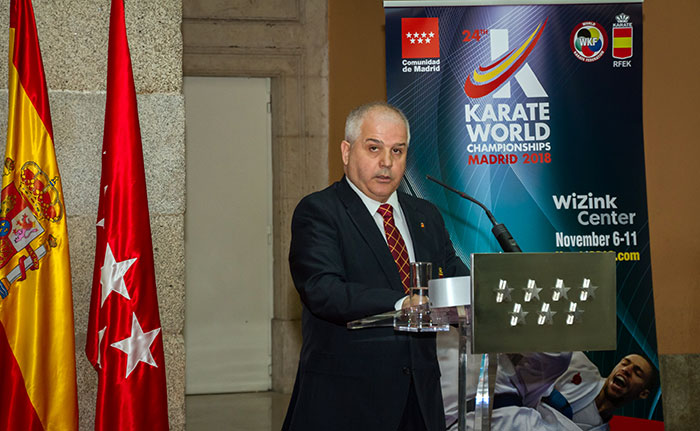 “I hope that all fans of the sport in Spain will come to the WiZink Center sports hall to attend the event. It would be a great success for us if the sports hall is full and if our competitors can feel the passion of the fans from the stands. To compete at home is always an incredible experience, and I am sure that our national team will have the support of the Spanish audience,” added Mr Moreno.

Sandra Sanchez will be one of the athletes spearheading the Spanish delegation in the tournament. The World ranking leader defined competing at home as a “dream come true”.

“It motivates me greatly to know that we are having so much support. All I want is to step of the tatami and give all this energy back with a positive result,” said the Grand Winner.

Damian Quintero, also one of the ambassadors of the Spanish team stated that he is not feeling pressured but proud for this moment.

“A World Championships at home is enough of a big reason to give us all the strength we need to go out there and make our best. The home-ground factor is always helpful, and I am sure that the WiZink Center will be full of fans supporting our team,” declared the World Championships runner-up. 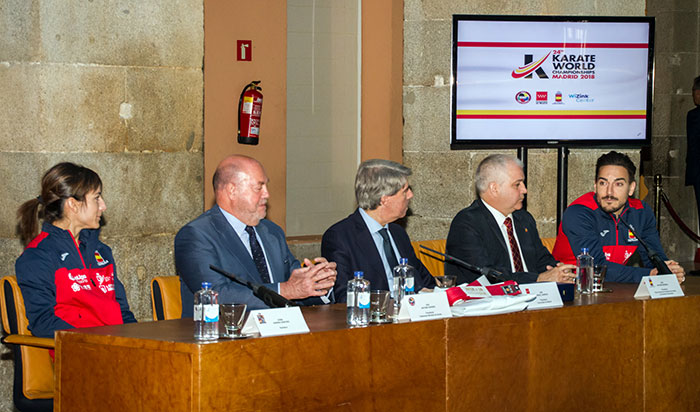 The 24th edition of the Karate World Championships is the last tournament of its kind before the debut of the sport in the programme of the Olympic Games Tokyo 2020. The competition will begin on November 6 with the elimination rounds and it will conclude with the finals and the medal bouts which are scheduled for Saturday 10 and Sunday 11.

Over 1400 competitors from 138 countries have confirmed their participation in the different categories of the tournament. This tally represents a record of attendance in the event with respect to previous editions. More than 4000 people travelling with the different delegations from the five continents will visit Madrid and will experience first-hand the anticipated celebration of the sport.

The Karate World Championships will be broadcast in over 16 TV networks and platforms and in 186 countries around the world.

For more information, go to karate2018.com 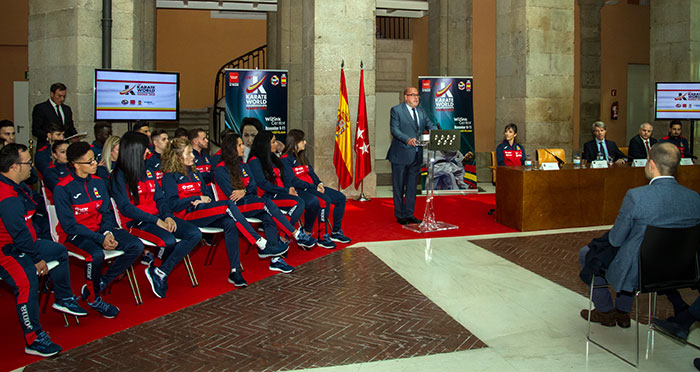